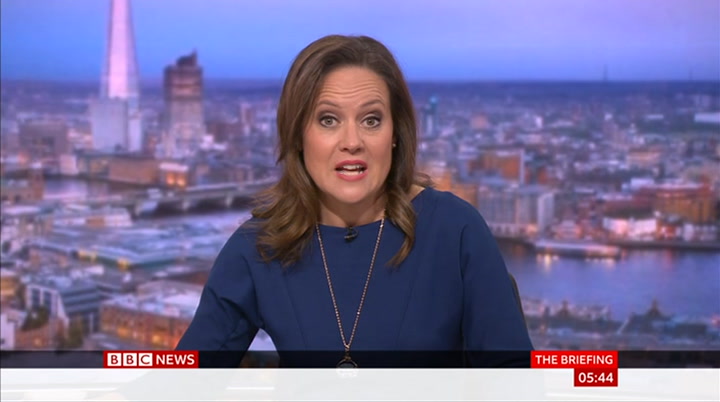 now it's time to look at the stories that are making the headlines in the media across the world. this front page is a little standard today, the daily mirror which leads under scotland's highest court ruling that the prime minister ‘s move to suspend parliament was unlawful. suggesting that he may have lied to the queen about his motives in order to push the suspension through. next, the financial times takes a look at hong kong's £30 billion bid for the london stock exchange. according to the paper, the london stock exchange is preparing to rebuff the takeover bid. buzzfeed has the details on president trump's plans to tackle the rise of e—cigarettes in the us, by removing non—tobacco vape flavors from the market. the daily mail focuses on the rates of cancer survival in the uk,
5:46 am 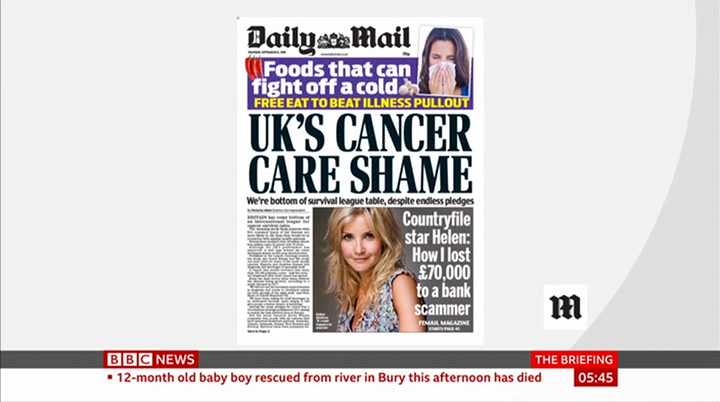 which is lagging behind other high—income countries according to a study. and finally — people around the world are sharing their recollections of the 9/11 terrorist attacks, 18 years on. this article is the memories of a graphics designer who was working at the new york times. with me is david buik, market commentator at core spreads. that's get stuck in. we were discussing yellowhammer earlier, the papers can decide what to focus on. they're looking at oliver but what is the headline? is it going to be the highest court in scotland's decision which was astounding? i was going to be back yellowhammer. cerberus lied to the queen? let's deal with the yellowhammer then, we have project hysteria. it is overplayed, everyone has a right to
5:47 am 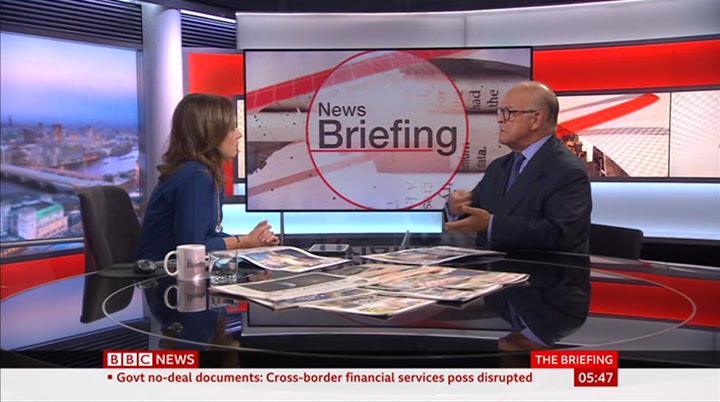 know the content and the worst possible scenario, that's not hyped up. some and i have talked to civil serva nts up. some and i have talked to civil servants who have worked on yellowhammer, because i personally know some of them. absolutely. they're saying it is not hysteria but they are doing theirjob to be prepared for anything and when this document was put together and when they put the analysis together, it was not supposed to be in the public arena. salyer100% right. it is the way people presented. and it needed to be done. —— people present it. it is the way you label it and the way you put it. this is a horrible headline, i don't like it at all. it's a ghastly headline. we will know next week when the supreme court deals with — in london— that's on tuesday. that is the real deal. scottish law is different. this is the highest court in scotland. i
5:48 am 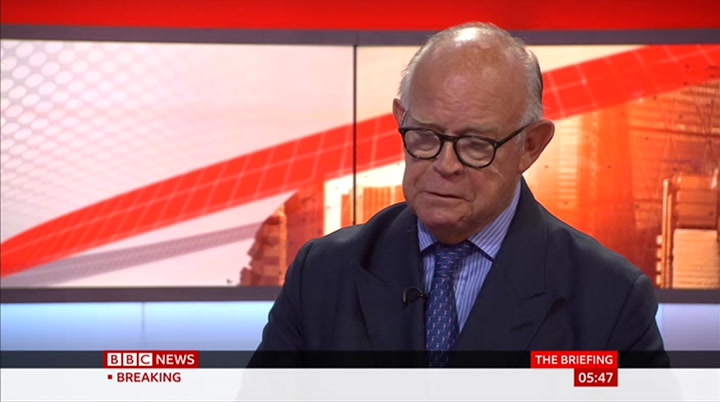 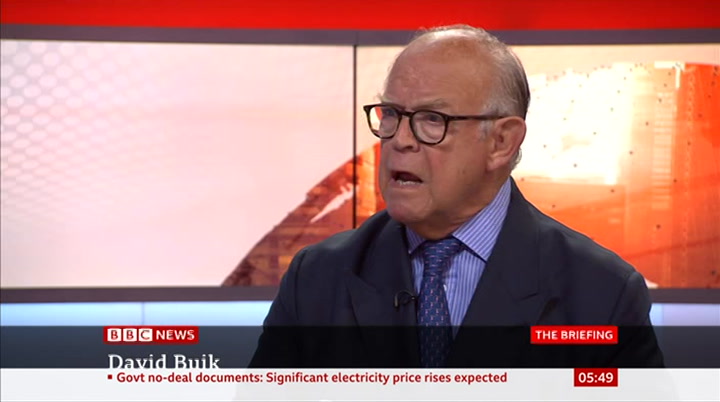 is absolutely at loggerheads, unless we have a general election, we are not going to make any progress. because the same numbers... so you don't believe we will reach a deal before october 17 or october 14? impossible because parliament was that it happened. it is as simple as that. because of parliament because borisjohnson went be able to broker one? as we know now, no deal is to be taken off. it has been legislated through parliament and now that means that boris johnson through parliament and now that means that borisjohnson is in a position, but you support him or not, but the likelihood of being able to agree any deal by the 31st of october in —— unless you say, we're out of here. it is not going to happen. let's look at the financial times. i wanted to get to talk about this because we call you a veteran of the city. wanted to stop working in the financial market in london? 1962. 1962? it's a long time ago and the london stock exchange is having to fight this
5:50 am 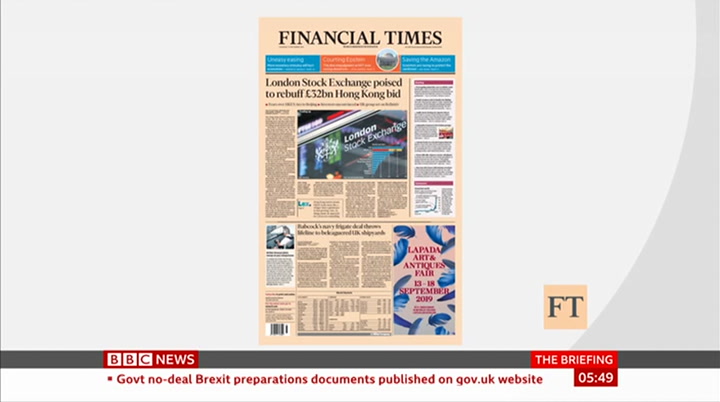 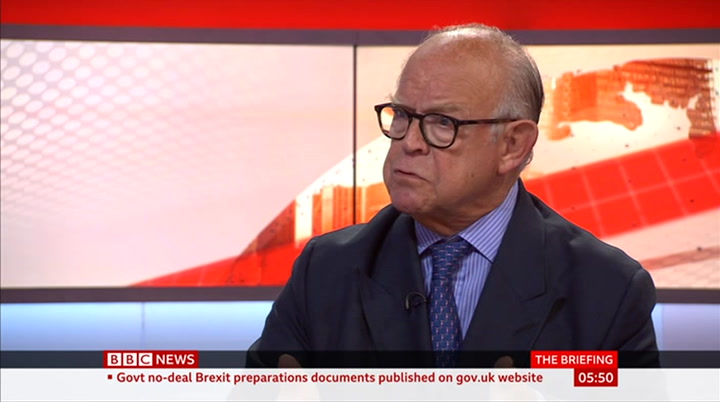 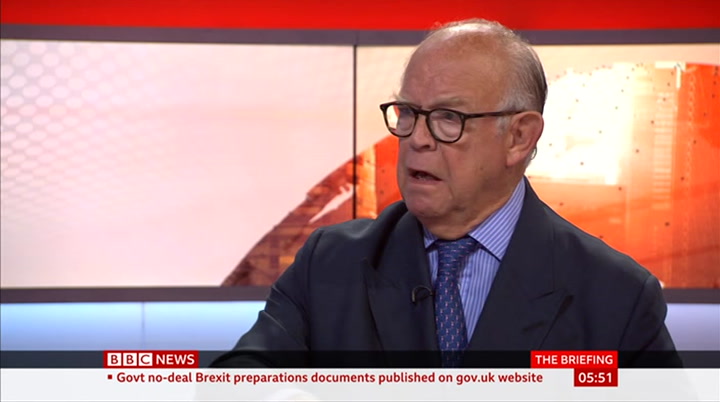 cannot encroach on people ‘s privacy and what they want to do. they just agreed to a huge merger of $200 billion in order to do vaping. they're not going to be very happy that there would be a ban on that. sorry, ijust think it's the wrong thing. what about the guns? yes, absolutely. doesn't many of our viewers have pointed out. have a look at what people are saying and do send us your comments. but others moved to the new york times and the memories of charles m bello. he talks about his day. you are working for counter index at the time and they had which floor in the world trade center? the 94 the 95th floor. and i was having lunch at the time. with a great friend of mine from lambert. and you in london? i was in london. as was i. i went back to the office to see them or finding out, tea rs, we office to see them or finding out, tears, we all knew the people. 632 people died in our company and we
5:53 am 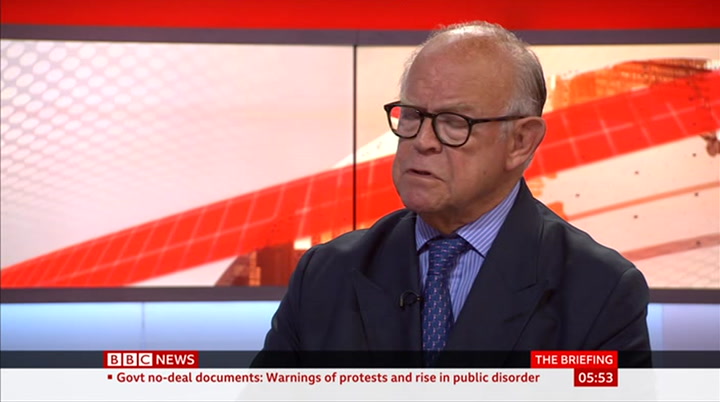 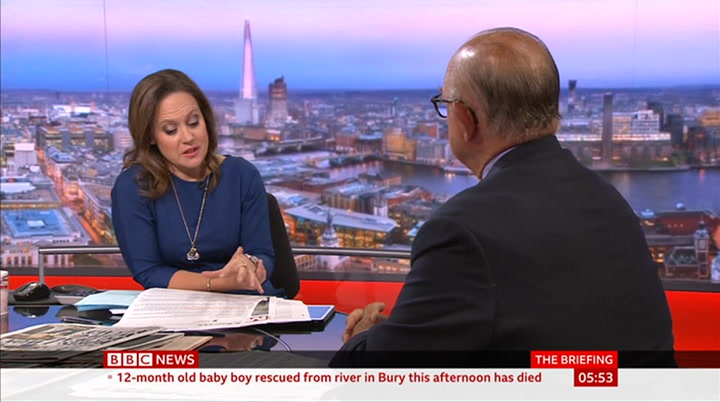 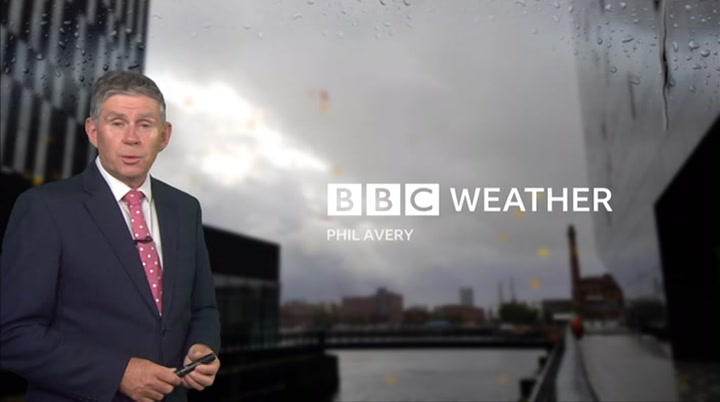 hello. just wanting to bring you right up—to—date with how we see the weather panning out across the british isles for the next few days. wednesday was a slow start across southern parts. and in fact, that same weather front links back to another area of cloud and rain in the heart of the atlantic. that's an area of low pressure that started life way down across the mid—atlantic, so it's bringing mild, moisture—laden air across the british isles and feeling really quite humid. to the south of the weather front, in the heart of that system, the cloud at its thickest so rain from the word go for parts of northern ireland, getting into scotland, eventually across the border into the far north of england. following on behind, somewhat brightest skies to the south of that weather front, quite a bit of cloud around, for sure, and some of it, really quite low in the atmosphere across the south—west on what is going to be quite a blustery day. but those mild, moist air are coming in from the south—west, not a cold direction by any means at all. and you'll find temperatures pushing on towards 23—24 degrees somewhere across east anglia and the south—east, just that wee
5:56 am 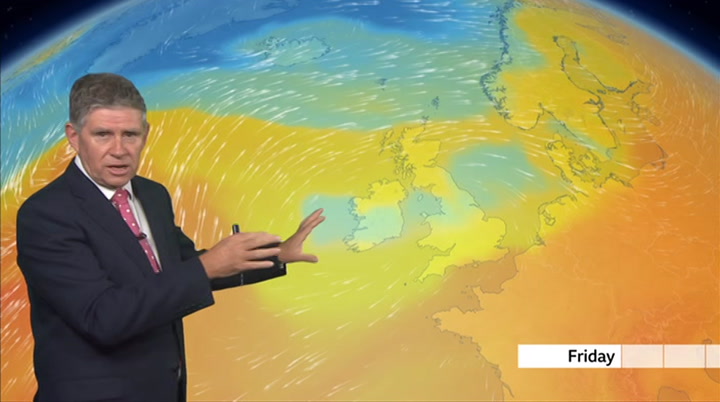 bit fresher further to north. but all the while, once that weather front is pushed away, despite the fact skies begin to clear, it will be a slightly fresher night with temperatures down in single figures across the north, but where you keep the cloud in the south, 12, 13, or 14 degrees as the starting mark for friday. friday sees an area of high pressure building in behind that weather front as it moves in towards the near continent, and in that circulation, at this stage, the air is fairly fresh, it has to be said. so, friday is a dry, fine day for the most part, enough cloud for the odd passing shower across the north and north—west of scotland, but many areas dry. and despite the presence of the sunshine, well, it's not the warmest of days over the next few days. you'll see the top temperature there in the south at around about 20 degrees, but as we move from friday on towards the weekend, the centre of that high moves a little bit further towards the east.
5:57 am 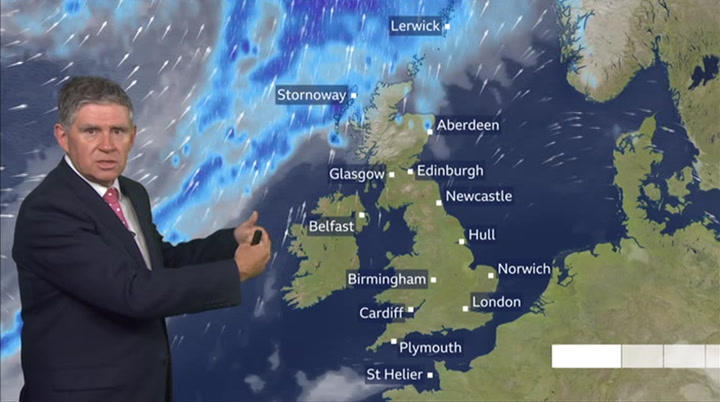 so we then begin to tap into those mild airs again coming from way down in the atlantic. and for the greater part for southern scotland, england and wales, and for a time, northern ireland, it's going to be dry, fine and sunny. and certainly a warmer day for many, the notable exception is that front across the northern and western parts of scotland which becomes this weakening band of weather, robbing some areas of their sunshine as we move into sunday. still, many areas will be dry but that cloud could give the odd spot of rain to the south it where the temperatures are again rising to about the mid—20s.
5:58 am 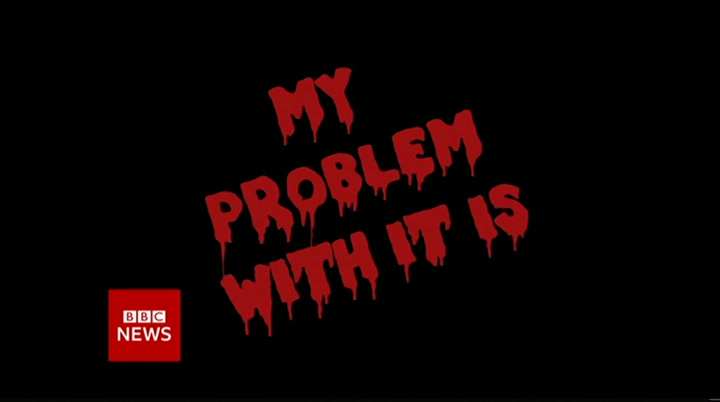 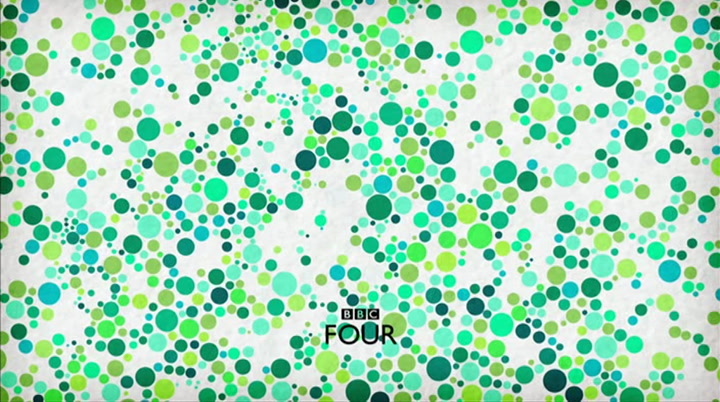 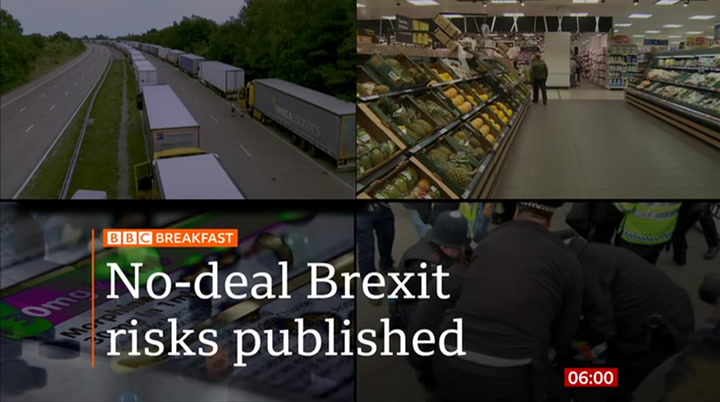 good morning. welcome to breakfast with louise minchin and charlie stayt. our headlines today: riots, shortages of medicine and rising food prices. the government publishes its worst—case scenario for a no—deal brexit. cancer survival rates in the uk are improving, but they still lag behind other rich countries. saving the high street — another new report suggests radical changes to the way our town and city centres are run. i'll look at whether it really can make a difference. england drop batsman jason roy for the final ashes test, which starts this morning. after failing to regain the urn, they say they're already planning for the future. finding love isn't easy, but if you have a learning
6:01 am

The latest news, business and sport from BBC News, plus your need-to-know guide to the big stories coming up today.