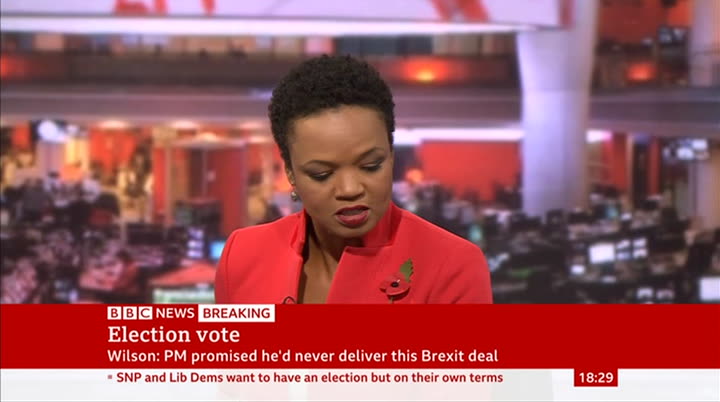 ‘ colleague, going to cross to my colleague, geeta guru—murthy at college green at westminster. you can continue to watch our coverage also on bbc parliament. welcome to westminster. we are bringing you special live coverage to viewers around the world, bbc world and on the news channel. we will bring you special continued coverage of the debate that the government has brought today pushing for a december the 12th election. at the moment, it looks as though the government is not going to win that vote, but there is speculation that it could bring another vote this week, possibly tomorrow, to try and bring a december the 9th election, and that could get wider support from the lib dems, the snp and even possibly from the labour party, yet to be confirmed. we have seen boris johnson opened the debate asking for
6:31 pm 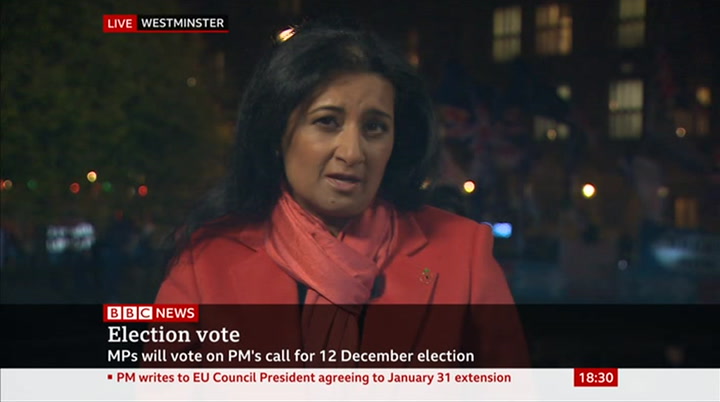 support from across the house, saying that nobody wants an election in december, but parliament now is stuck and defunct, and the only way to bring brexit to a decision point is to have an election. jeremy corbyn also says he does not want to go along with that, he doesn't want to the withdrawal agreement bill to go through, and he doesn't trust the prime minister, and that is why labour will not support tonight's vote. we a re labour will not support tonight's vote. we are expecting a vote within the next half an hour, possibly sooner, and we will bring you that result as it comes. let's take you out into the house of commons. this is one of the suggestions of the prime minister, i know we are wondering from the motion here for a moment, mr speaker. this is one of the arguments the prime minister has put forward, that surely all of this will just put forward, that surely all of this willjust disappear if and when we have a free trade arrangement. but the withdrawal agreement makes it very clear under article 15.8 and
6:32 pm 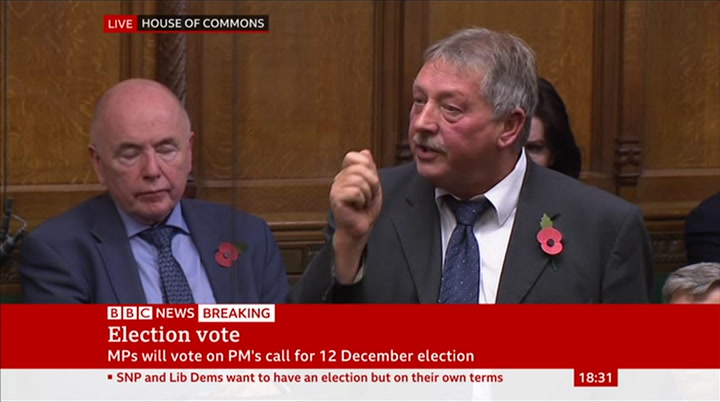 13.8 that even with a free trade arrangement, and this would have to be agreed with the eu, so they have a veto, so much for the claim that we have got sovereignty back, that the eu could have a free trade arrangement which would still leave northern ireland fully or in part within the protocols in the agreement. so whilst i would love to think that that would be a way out, and we would love to say that that would be a way out, unfortunately the agreement which the prime minister has signed does not allow it to be a way out. yet another reason why we have got to get this right, and yet another reason why we don't believe that debating, croute and eisen, accelerating the passage of this bill through the house and —— scrutinising and accelerating the passage of this bill for the house will work. i want to speak briefly on this matter, because it is an
6:33 pm 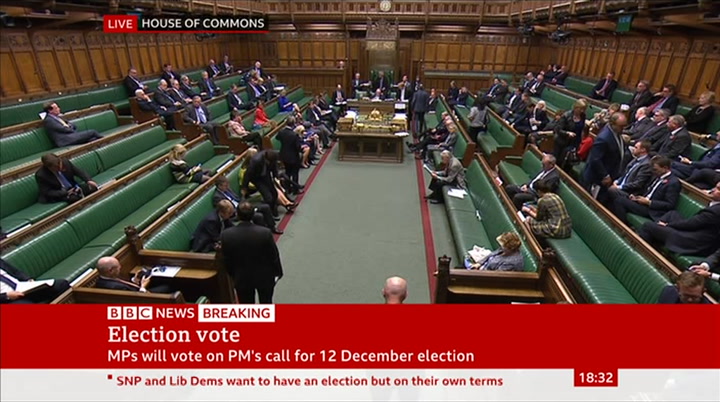 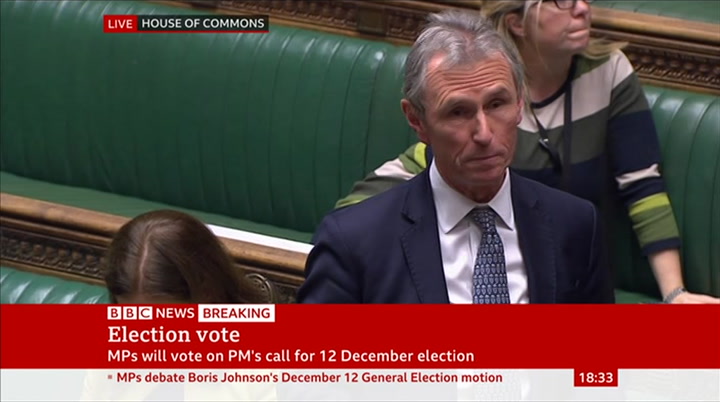 done a two—day tour around my constituency last friday and saturday, and i spoke to a number of people, there were three hardcore remain —— remainers who wanted to do anything to remain, but most people either said, i voted to leave, get on with it, and then there are others, who say, i voted to remain, but i can't believe we are still in the european union. i'm a democrat, i believe in democracy, and when we have a referendum, we believe in carrying out the wishes of that referendum, and will remember what was written on the back of that pamphlet. it said that we would follow the instructions of the british people in that referendum, and even better than that, we had a general election in 2017, and in that general election, we said that we would deliver brexit. the labour
6:35 pm 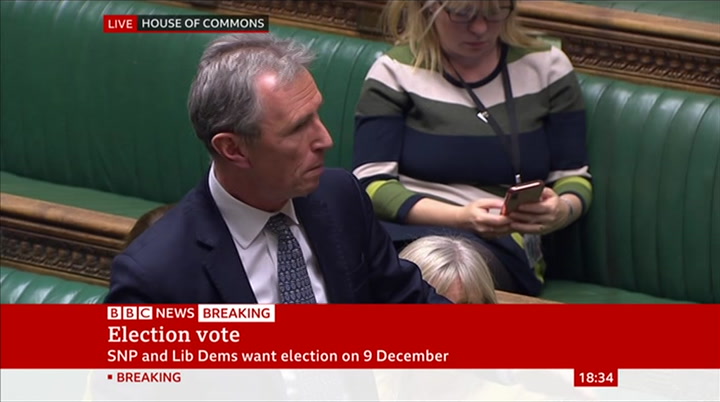 party stood in that general election and said they would deliver brexit. but what do we find? ever since that general election, we have seen dither and delay, dither and delay, anything, anything but vote for the brexit that they promised. it was either not the right deal or we have got to have no—deal taken off the table. we had an opportunity last week to take no deal off the table, and that was the possibility that the labour party could have actually fulfilled their promise of that general election two years ago and voted for the deal that the prime minister brought back from brussels, but no. the vast majority of labour mps but no. the vast majority of labour m ps voted but no. the vast majority of labour mps voted against a second reading, and what that meant was, they didn't wa nt and what that meant was, they didn't want it to go any further. there was no possibility of them amending that legislation to have a customs union, to get work ares' rights, to get
6:36 pm 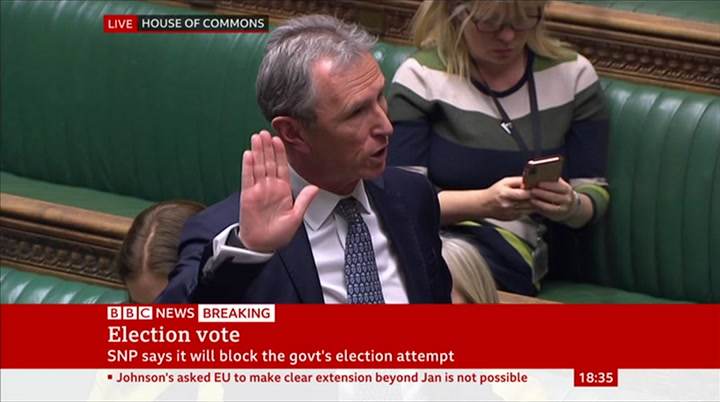 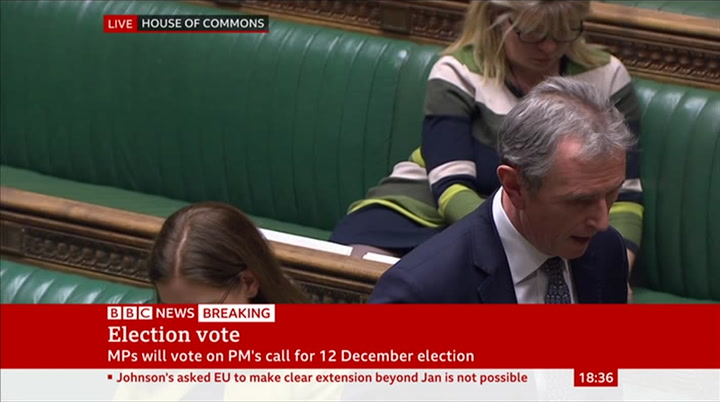 110w that they would deliver brexit, and now they clearly are not doing that. they then said that they wanted more time to scrutinise the withdrawal agreement bill, even though the vast majority of them voted against it going any further. they wanted more time. and so tonight, we are offering them more time. they then say they want an early general election. well, the way they get an early general election is by voting for the motion tonight. they get more time to scrutinise the withdrawal agreement bill so at least they will fulfil part of their promise two years ago, and then they will get there early general election on december 12, whereby then they can put forward the programme that they wish and see where the people go. on the other hand, we've got scottish nationalists, who basically at the least are saying december the 9th. they don't want to deliver brexit, they never have, but nonetheless they never have, but nonetheless
6:38 pm 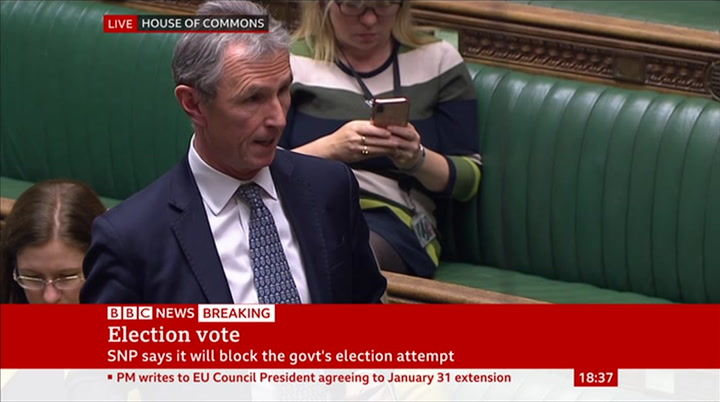 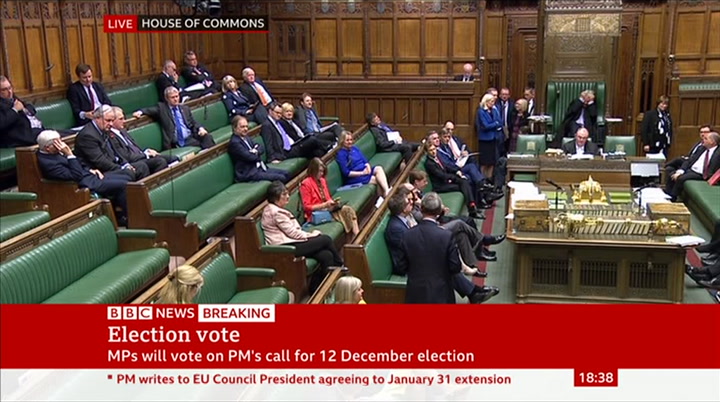 position, but we are in an even more bizarre position with the labour party, because they say if they win the election, they will go to brussels, renegotiate brexit and then put that in the british people ina then put that in the british people in a second referendum and campaign against the deal they just negotiated. that is the most alice in wonderland politics that i have seen in wonderland politics that i have seenin in wonderland politics that i have seen in 28 years, and now we have an opposition that has been calling for an early general election running scared. the last thing they want to do is face the electorate, and quite frankly, i can see why. mr speaker, we are apparently approaching the season of goodwill, and we are supposed to have christmas parties in our primary schools, and we are all supposed to wish each other seasons' greetings. i do hope that people who want a season of goodwill have not been watching these exchanges today. they say that
6:40 pm 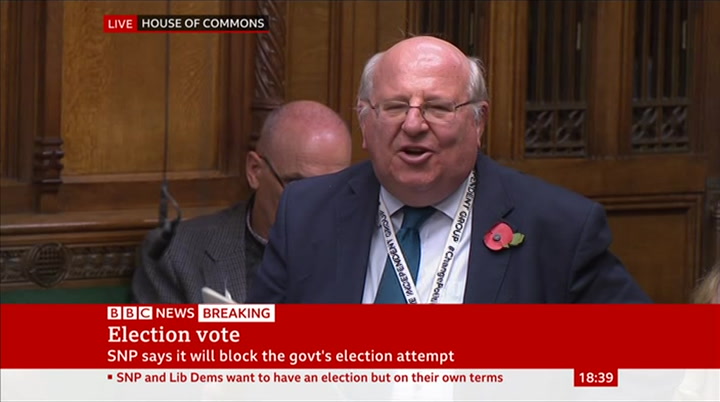 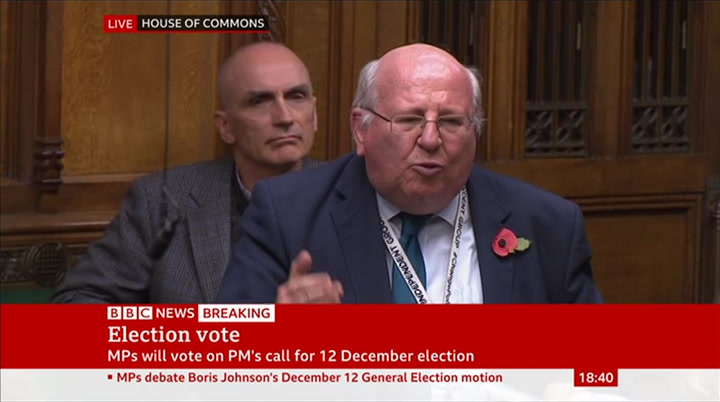 vote, that will still leave a majority in this country extremely unhappy with the outcome. and, given that a referendum, in my view a misguided referendum, an advisory referendum but nevertheless a referendum but nevertheless a referendum that the former prime minister david cameron said would be binding, and then he made his reckless gamble and then run away and gave his successor is the mess to clearup, and gave his successor is the mess to clear up, that referendum got us into the mess. the only way we will be able to have closure in this country is by putting the withdrawal agreement subject to a confirmatory vote by the people, and legislating this time that that referendum is legally binding and unambiguously so, and! legally binding and unambiguously so, and i will give way to the honourable member. isn't it somewhat
6:42 pm 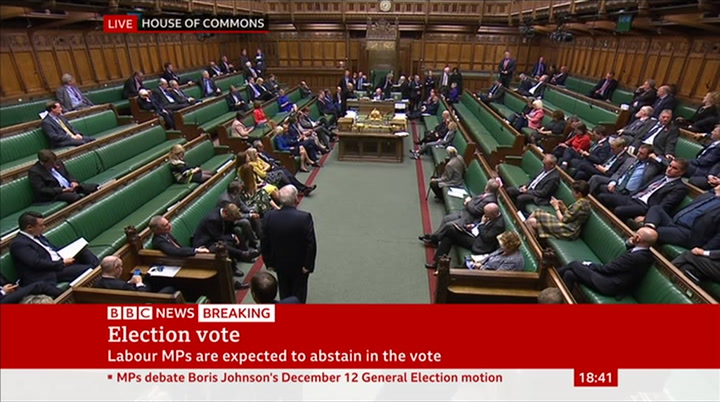 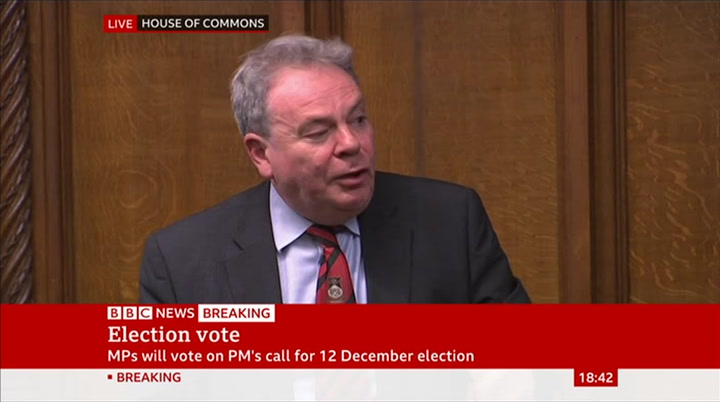 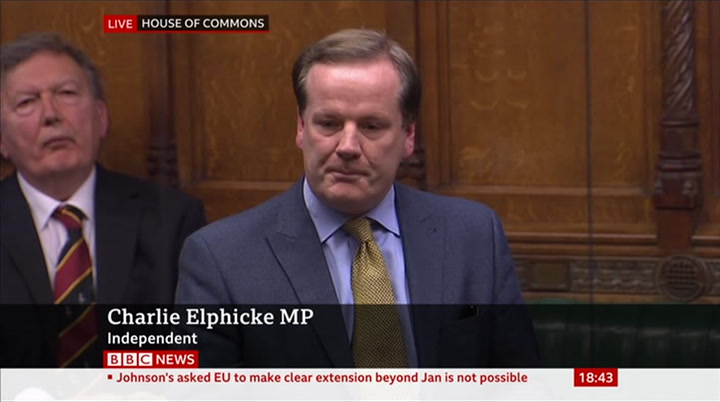 one way. in one way. and that is by the people in a general election to make the final determination, and thatis make the final determination, and that is why i will be supporting a general election tonight, and so should each and every one of us. the speaker: order. under the standing order, i must now put the question. the question is that there shall be an early parliamentary general election. as many as are of that opinion say aye, on the contrary, no. division! clearthe lobby. studio: so, john bercow has called for that vote, an important moment because boris johnson for that vote, an important moment because borisjohnson is again an hour trying to push for his withdrawal agreement bill to go through parliament and have that december the 12th election. it is
6:45 pm 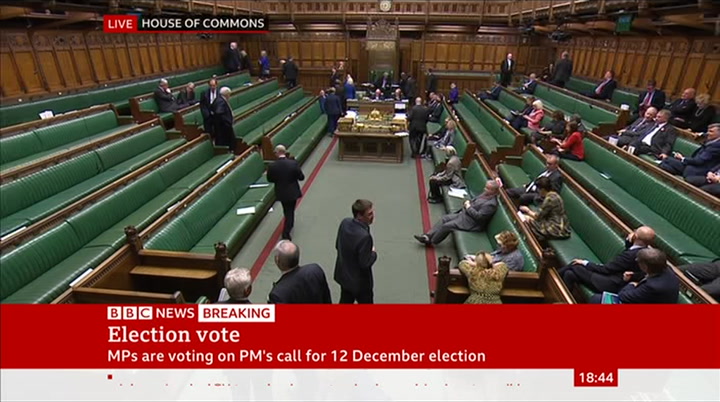 expected that the government is going to lose this vote. we can see that parliament has not been very packed tonight. but it is expected the government will lose that, and speculation that if that happens, they will possibly put down a one line bill tomorrow to try again for a december election with lib dem and snp support, picking up a course on the offer that that part of the opposition had made to them. but it isn't clear that there is a full backing across the parties for such a move. some snp mps don't support a december election. also some concern about the timetable, whether a december the 9th election has got time to go through, it would just have three days to get royal assent, and soa have three days to get royal assent, and so a lot of talks going on at the moment about exactly the date and how much support there is. some speculation also that the labour party would back that potentially because it would nail down the exact
6:46 pm 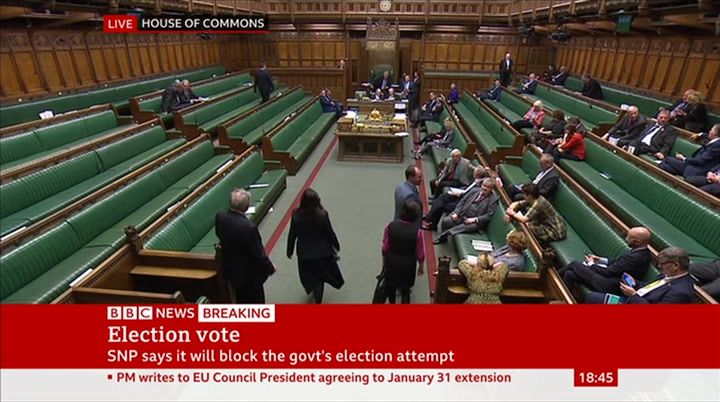 date of an election, on december the 9th, but a lot of that is speculation. we are waiting now for the vote today, in the next few minutes, to see whether the government will win this vote. coverage continues on bbc news. you are watching bbc news, and special coverage from westminster of this debate that has just come to an end. the debate on the government's motion calling for an early general election under the fixed—term parliaments act for december the 12th. the division has begun, and the mp blue mulling over exactly what they want to do. mps are voting on that call, which it has to be said, there is not a lot of optimism, that they are actually going to win, because of course they need the labour party, substantial labour votes in order to carry the
6:47 pm 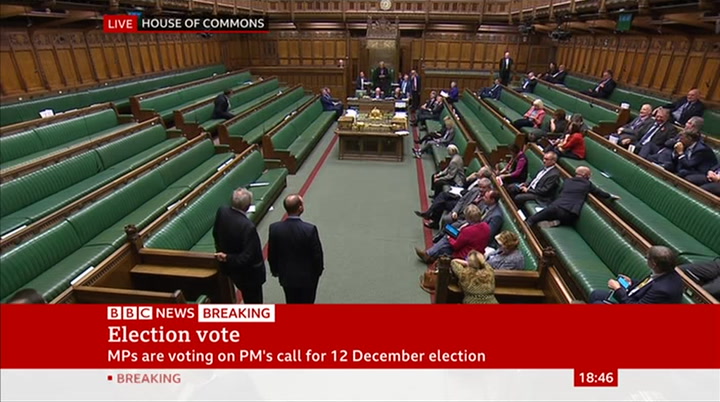 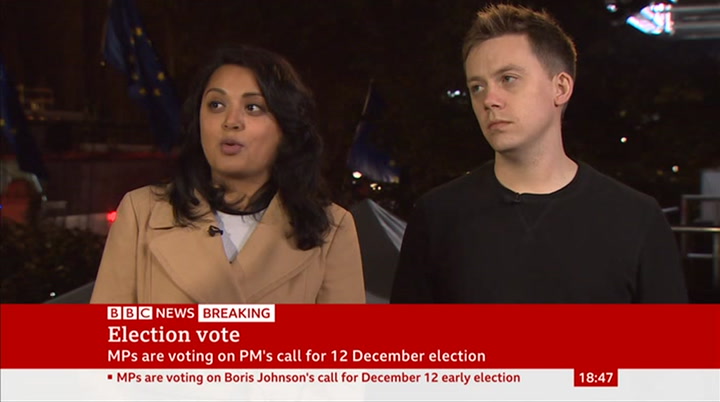 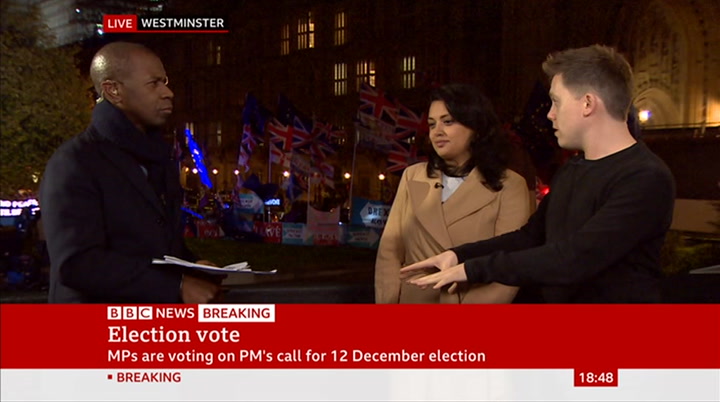 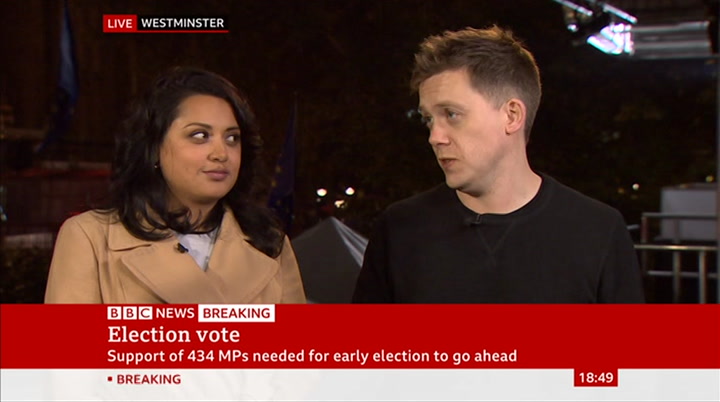 A round-up of all the day's sports events.