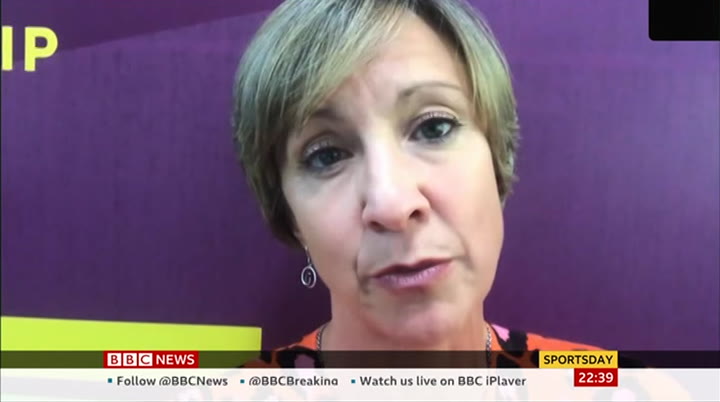 trusting relationships and a really good knowledge i think of where our tea m good knowledge i think of where our team is at at the moment, and where the potential of the team could be. scotland have qualified for the t20 world cup in australia next year. they've beaten the uae in their playoff in dubai by 90 runs having posted 198 for 6 in their 20 overs the uae struggled in the chase eventually finishing on 108. scotland are the fifth of six teams to go through via the qualifying tournament. the new chief executive of england netball has promised to build on the team's recent success, both on the court and in the public eye. and make the current commonwealth champions the world's number one. but to do that. fran connolly admits the domestic game needs to make some big changes to try and help the red roses on the globalfront. she's been speaking with my colleague hugh ferris. it's absolutely critical. we will not succeed on the world stage and
10:41 pm individual athletes will be making decisions as to whether this is the right time for them to step down and there will be lots of fresh talent really trying to prove their point and submit their position. i think it's quite an interesting and exciting time. another person decided to spend time with the sport is tracy neville. and given that she has had such an important role in the past what can you imagine her future being within england netball? tracy has been a huge part of the success tracy has been a huge part of the su ccess we tracy has been a huge part of the success we have enjoyed a tremendous abbasid orfor the sport. you're going to give her the time that she needs to be a mum and the time whatever it is right for her we would love to have the backing in the game in some shape or form. that's all from sportsday. coming up in a moment, the papers.
10:43 pm 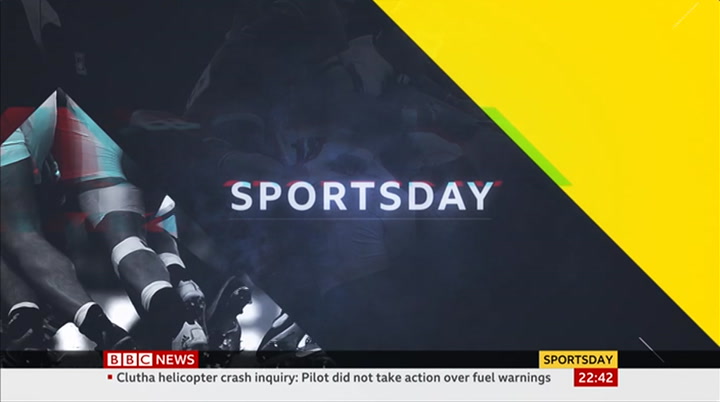 hello and welcome to our look ahead to what the the papers will be bringing us tomorrow. with me are anand menon, who's director of uk in a changing europe, and the political strategist, jo tanner — who was an adviser to borisjohnson when he was london mayor. many of tomorrow's front pages are already in. let's start with the telegraph and it reports that the brexit party is considering pulling out of hundreds of seats in the election, in a move that could boost the conservatives. politics on the front page of the guardian too. the newspaper sasteremy corbyn is kicking off his election campaign, with a promise to represent the people.(ani)the times warns of, what it calls,
10:44 pm 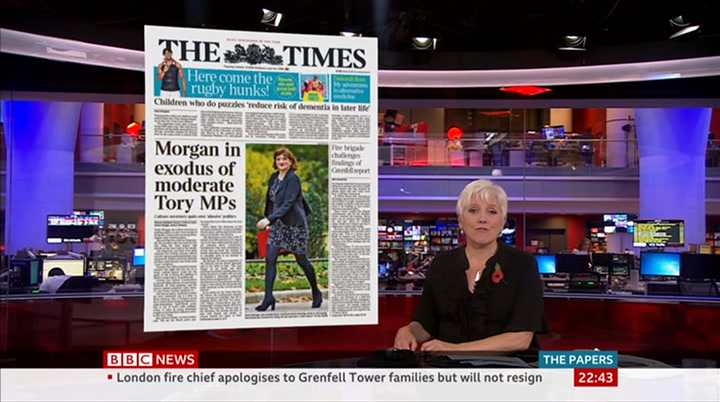 an "exodus" of moderate conservatives — as the culture secretary nicky morgan, joins a number of other mps leaving westminster. grenfell survivors and families are calling for the london fire brigade chief to resign — after a highly critical report from the inquiry into the blaze. that's in the ""i. the same story makes the front page of the metro — it says grenfell families are accusing fire chiefs of hiding behind the heroism, of the crews who tackled the fire. and the financial times leads on the decision by the us central bank to cut interest rates, for the third time in four months. so, a varied set of front pages, let's see what our reviewers make of it all. you start us off of the front page of the telegraph. the career going to look at the map first. there's a cartoon which has opening their door
10:45 pm 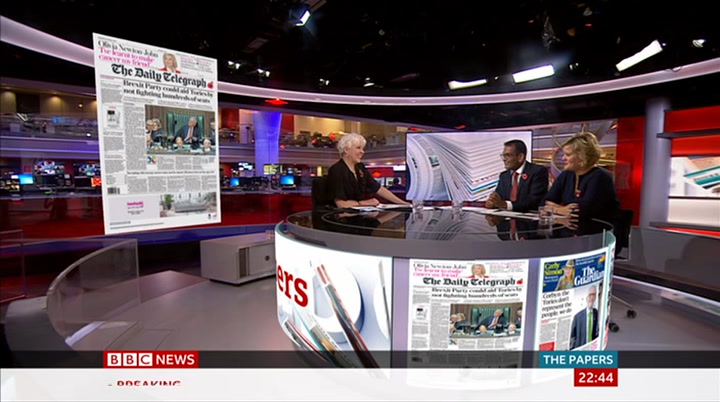 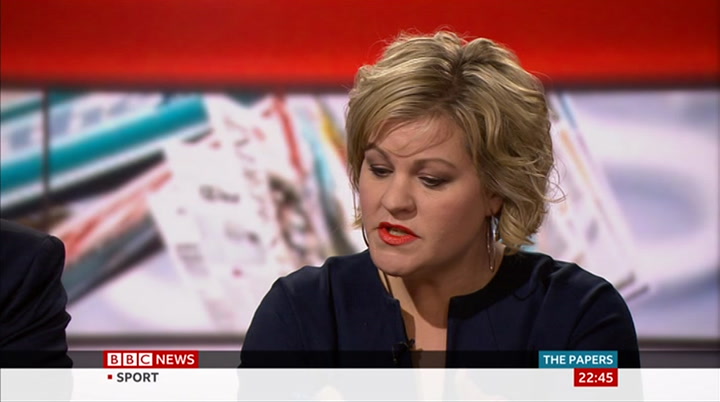 campaigns tomorrow from what we know. and the voters are also going to wa nt know. and the voters are also going to want to hear about other stuff. the exe want to know what will happen but the potholes in their road and the hospitals and local schools and why social care problems have not been dealt with and why nothing has happened for several yea rs nothing has happened for several years now on the big issues. when you talk to labour mps they follow the policy and basically saying the only policy day party offering a referendum. i wonder whetherjeremy corbyn is not quick to try to tie that into his aunt a vested interest rhetoric. same where the party for the people. we give you and defend your interest. so i'm not saying it will work i'm just saying it's probably wise not to write off as of yet. the electorate are very unpredictable. while we are talking about all of those things that will be on the agenda let's talk more about the front page story in the telegraph. brings a party not for
10:47 pm 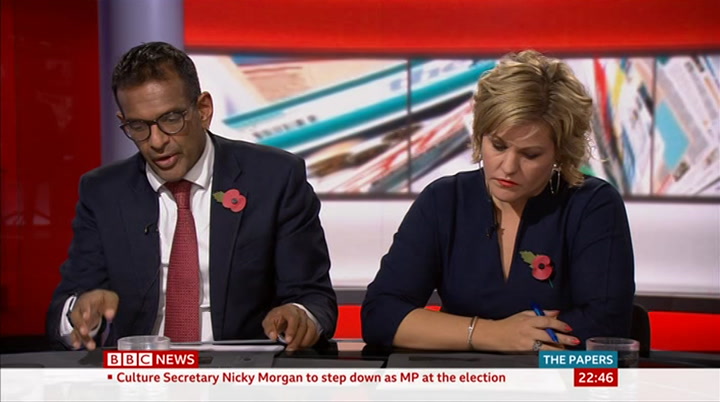 the hundreds of seats. this question already there. it sounds like there's a fight going on in the heart of the brings a party and what some people are claiming is that they might adopt a strategy of only talking about between 40 and 100 seats rather than going for 650. what those seats are will be determined and if the breeze a party decides to target seats with labour in contention for the tories is not clear there will harm or help. the party has adopted signature 50 candidates natural for us as we will compete in every seat. if that is out of the strategy a suspect it will cause them problems because a lot of people thought there would be standing as candidates are now finding out they are not. have they really adopted as candidates? it's like parties claiming they got several hundred thousands of members and they've actually got two and a dog. all we know about this party is what they told us. the reality is they could do the vetting of people we re they could do the vetting of people were thought actually maybe not now. maybe we can't put those in the
10:48 pm 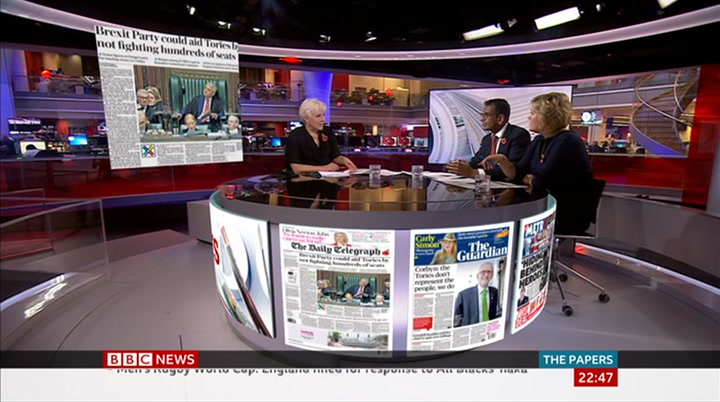 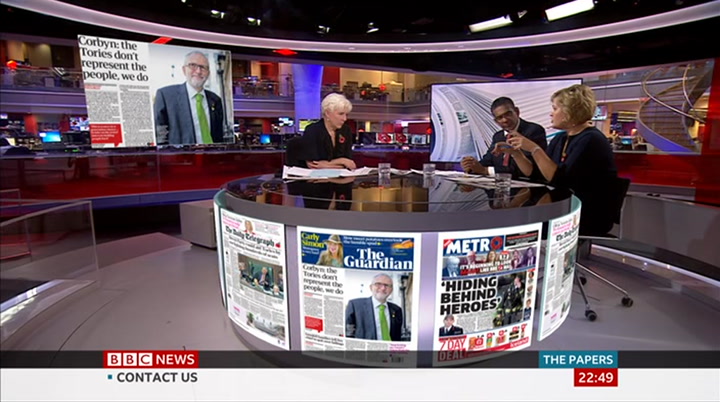 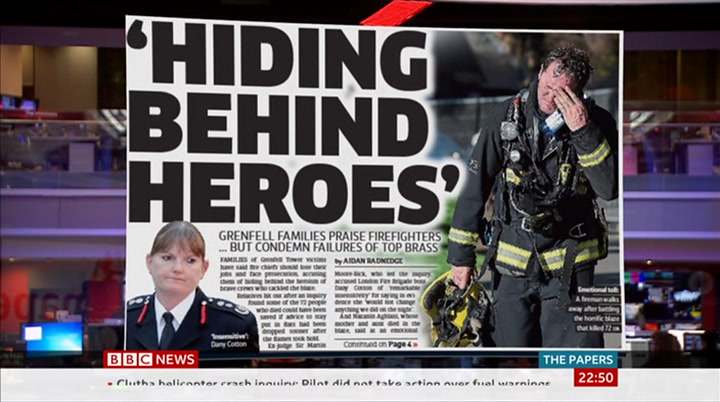 limits being attached to individual officers arriving on scene that overall policy is seen as having contributed on a lot of anger amongst the families and david has called for her to resign single leadership of the london fire service needs to take responsibility for a policy that this report is claiming had such nasty consequences. apart from the individuals involved the report today obviously pointed out problems with training, problems with assessments of buildings, theyjust look like there were preparatory work missing. it's essentially systematic failures. it's whiter than one particular individual. it's a cultural thing around how the organisation were prepared for this type of eventuality. there were suggestions, i think there is it? really over the fact that in the last few years probably the last couple of decades would seem net decline in big fires. generally actually in fires from years ago
10:52 pm 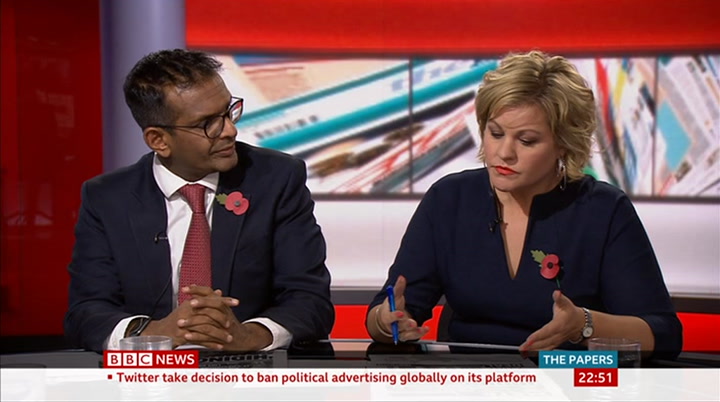 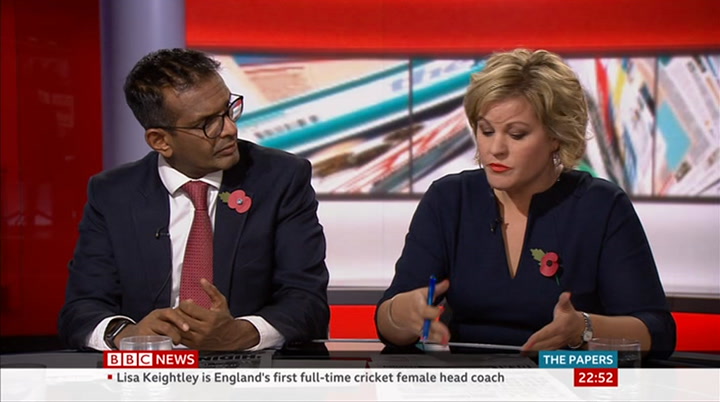 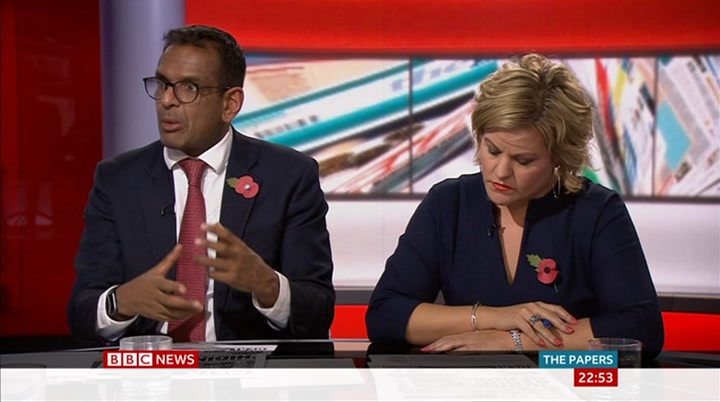 and some of the residents are attacking them for having done that. this has become political as well. and it will be about, i suppose it's about whether people will take ownership. and when this first happened there were criticisms with the politicians and how they handled it and it took time for people to go down and actually meet with people. this thing totally, it was shocking. it was seen across the world and i think there were multiple failures actually just even in think there were multiple failures actuallyjust even in terms of the response in the royal stepped in and kind of seen as the most sensitive people around the whole time. we actually went and met some of the victims. jets let's just hope there's nothing like this again in there's nothing like this again in the report makes a difference. we've only got a minute or so left so let us only got a minute or so left so let us turn to something slightly more cheerful. going back to the telegraph and we are coming to halloween and obviously the day when
10:55 pm 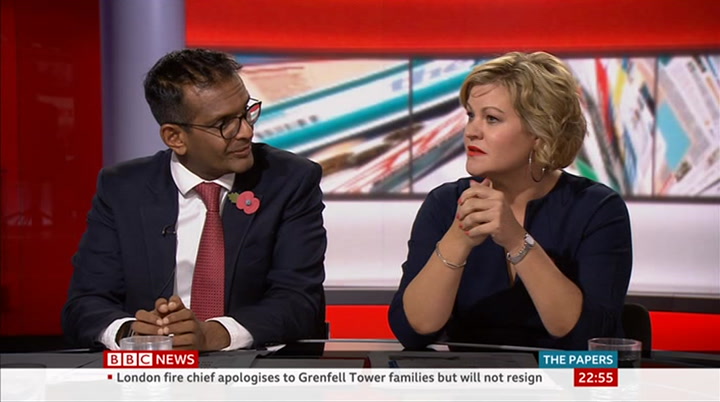 you can do that byjust getting out of marker pen and drawing a face on a pumpkin. you've got strong and passionate views on pumpkins. no but i got passionate views of fireworks which appeared to be the threat with some supermarkets saying they are not selling them. i don't like them going on for a month. i don't know why they are going on for so long.|j will have to stop you there. come backin will have to stop you there. come back in half an hour and we will do it all again. that's it for the papers this hour. and and jo will be back at half past eleven for another look at the papers, and don't forget you can see the front pages of the papers online on the bbc news website. it's all there for you 7 days a week at bbc.co.uk/papers. and if you miss the programme any evening you can watch it later on bbc iplayer. hello. good morning. southwestern reaches of the uk have had a relentless rain in the last couple of days. cornwall, channel islands and devon it was a grey
10:57 pm

and dank painting yesterday. the prospects for today though are looking drier, but not necessarily brighter. the area of low pressure that is in part to the southwest of the uk will start to pull away southwards, taking the rain along with it. more rain waiting in the wings though to come our way for friday. today though, we start off with some rain along the south coast and the southwest of england and parts of wales too. but come the afternoon, we are talking about a large, dry picture, perhaps a bit of drizzle with the odd shower and some lingering cloud but much drier. plenty of sunshine for the north and east. still breezy, especially for some of our western coasts. later on in the day, the cloud starts to build towards the west of the skies becoming overcast in northern ireland. temperatures up to 11 though in belfast with some brightness for plymouth, losing that rain up to 14 degrees. if you are heading out through the evening for trick—or—treating for halloween, a fine story across the eastern parts of the uk,
10:58 pm 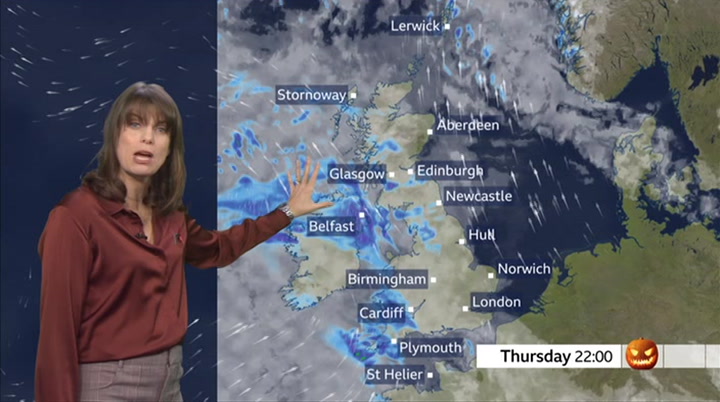 the cloud thickening in the west though to bring patchy outbreaks of rain at first and some heavier rain by the time to get to midnight as the next area of low pressure starts to work its way in. it will also bring strengthening winds too and this low centre will be staying with us for a time, particularly on friday will be pulling the air and from the southwest of the uk from the atlantic and so yes, the rain will be coming down but actually, the temperatures will on the whole be going up it's a quite heavy downpours of rain at times, but coming in showery bands, there will be some brightness between the rain and in that sunshine we can see up to 16 or 17 degrees across eastern england with some more persistent rain in the south coast later in the day. just nine or ten to the north across scotland. that area of low pressure is key to our weekend, it will be staying with us exactly how it develops is open to some questions still at the moment, but if we do get this scenario where we get this deep squeeze to the south of the uk,
10:59 pm

it could be a very windy day across southern england, particularly along the south coast. never mind really where you are, a breezy and wet weekend basically in store.
11:00 pm 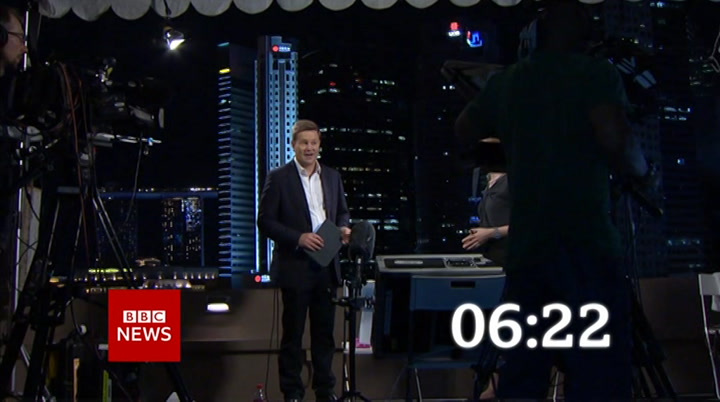 No need to wait until tomorrow morning to see what's in the papers - tune in for a lively and informed conversation about the next day's headlines.