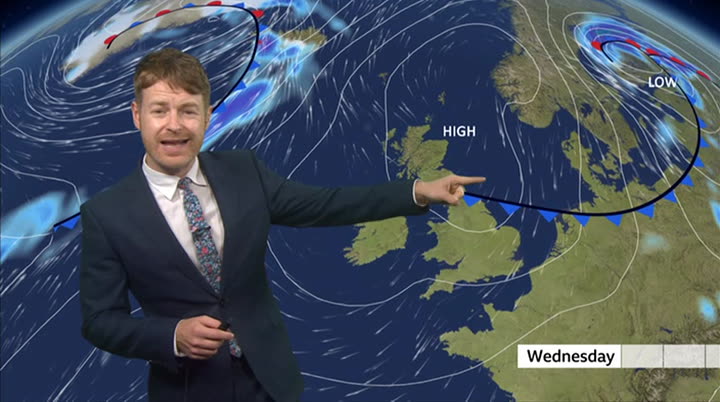 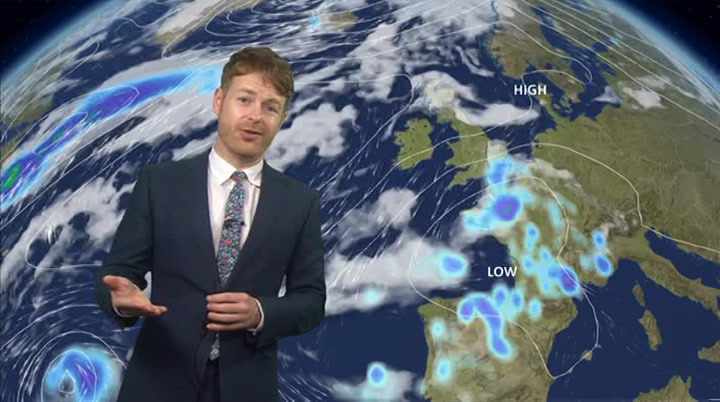 breeze is a sign of a change on the weights come the weekend. in fact, low pressure to the south of us will send cloud and showers in our direction and that means there's a chance of catching at least a few showers in the south of the country but rather than saying out right there definitely will be some in london for example, just an indication of the cloud increasing. on the whole, looking at the outlook for many of us, i'm sure you'll agree it's looking fine. that's all from the bbc news at six so it's goodbye from me and on bbc one we nowjoin the bbc‘s news teams where you are. hello, and welcome to sportsday. i'm gavin ramjaun. the sun sets on macclesfield town, as one of the oldest sides
6:32 pm 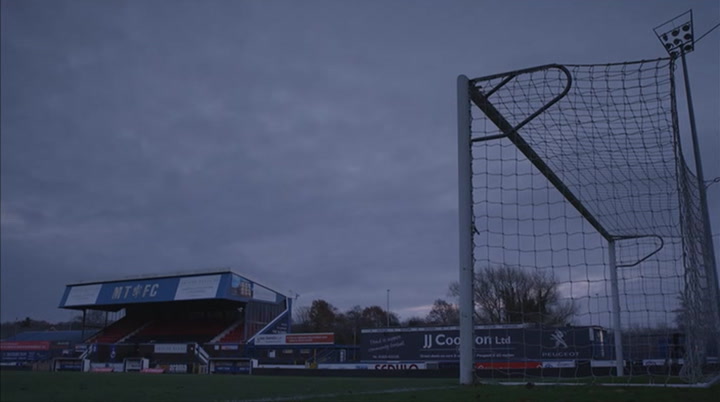 in football are wound up over unpaid debts. rory over unpaid debts. best to the rescue. his century against rory best to the rescue. his century against australia helps them recover from a terrible star if they chase a series when it old trafford. and fans are back in the football league with many sites including norwich among those to allow 1000 in this weekend. hello, and welcome to sportsday, i'm gavin ramjaun. it's been a 146—year story for macclesfield town, but today, the high court called an end to the existence of macclesfield town football club. the team, initially founded in 1874, have been ordered to wind up over unpaid debts of more than £500,000. this after the club were relegated from the football league last season
6:33 pm 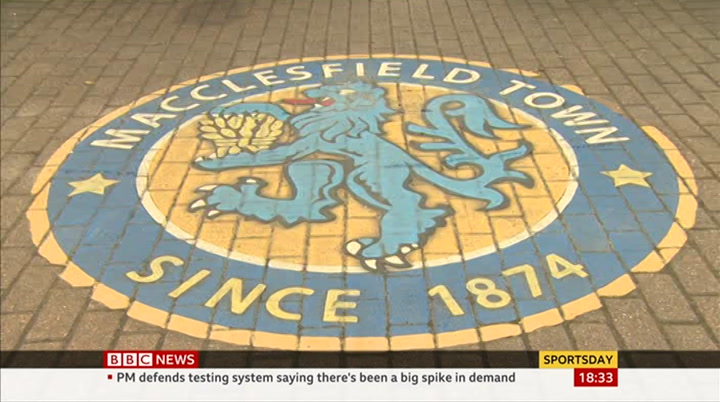 due to a points deduction. richard askam is at the ground, moss rose, for us. there is a real sense of shock here at the ground for fans of the club but taking end of the club is and wound up is another matter altogether even knowing there were financial problems. this club was first formed in the 1870s and since getting into the football league for the first time under semi member wrote in the 1990s has really plus to have its way. but the outlook really does look bleak after this winding up order in the high court over unpaid debts of half £1 million. ajudge said that over unpaid debts of half £1 million. a judge said that the owner had had plenty of time to pay creditors as well. as far as a chaotic season on and off the pitch here where players repay late and they went on strike at one point as well and then there were penalties that were laid in deductions ultimately leading to the club being relegated to the national league.
6:34 pm

the situation of course is much worse than that. supporters have been arriving throughout the day, some of them laying flowers at the front of the ground. there is a sense of grief here. macclesfield we will miss you on one card. the club will miss you on one card. the club will have a few days to appeal or pay off a debt but make no mistake this club is very much on the brink. well, let's get some more reaction to this now withjon smart, chairman of the club's supporters trust. afanfor a fan for over 30 years and one of those at the ground. thank you for talking to us. jon, this is decades of history ending today. what is the mood and atmosphere like amongst the fans? i think it is absolutely a day of resignation really came of the fact that we have actually reached the stage never we have been basically kicked right down the football pyramid. the owner has run the club
6:35 pm 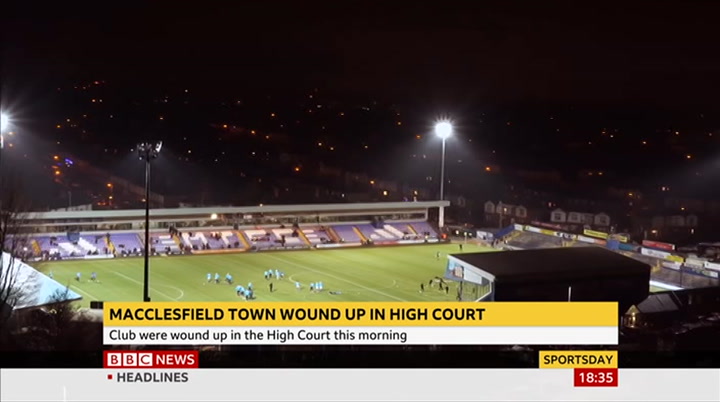 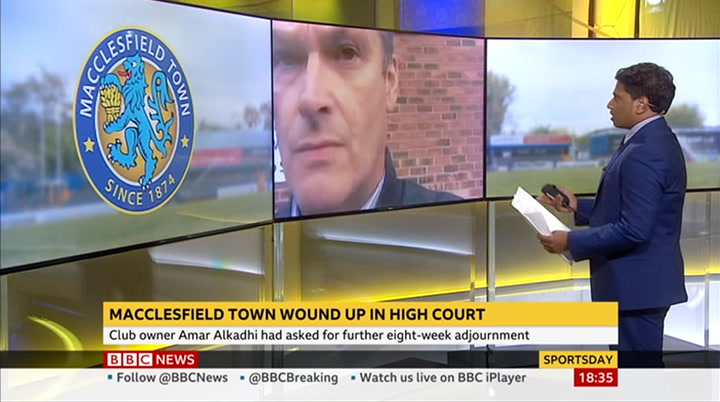 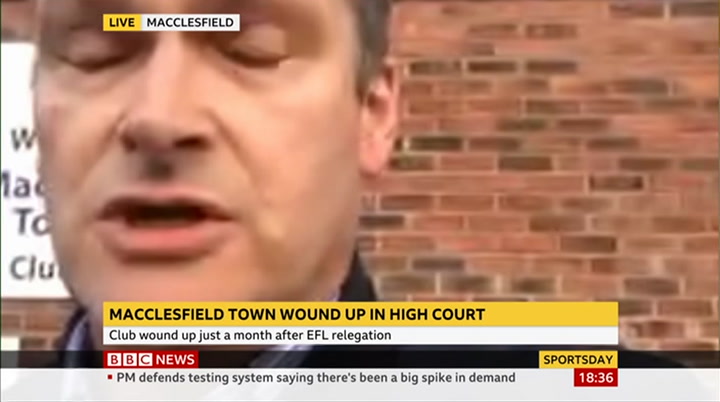 wanted to let go. he had the chance la st wanted to let go. he had the chance last season to sell to joe seeley, who came in with an offer which the owner was not convinced by. not quite sure why but that is a question not for me to answer. there is appetite from people like joe and others who have been involved at the board level over the past few years, so board level over the past few years, so potentially things will be announced over the next few days and plans are afoot to make the club phoenix and rise again. thank you very much indeed for that. cricket now, and the deciding one—day match between england and australia. england recovered from the losing wickets in the first two balls of the day to post a score of 302—7, thanks largely to the heroics ofjonny bairstow. his century helped the side to a respectable total ahead of australia's innings. let's get the latest from old trafford with henry moeran now. great to speak to you again. england
6:38 pm 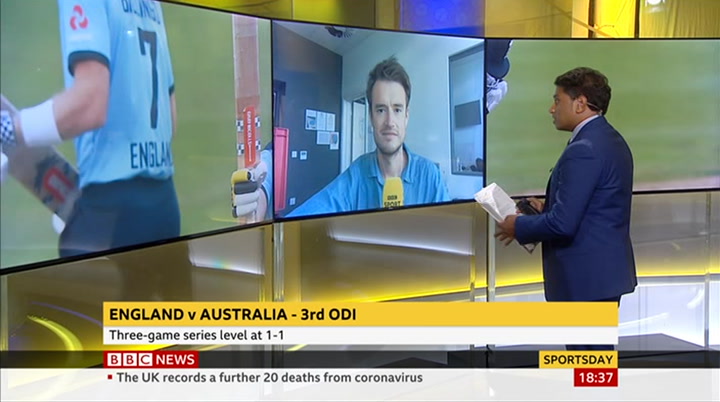 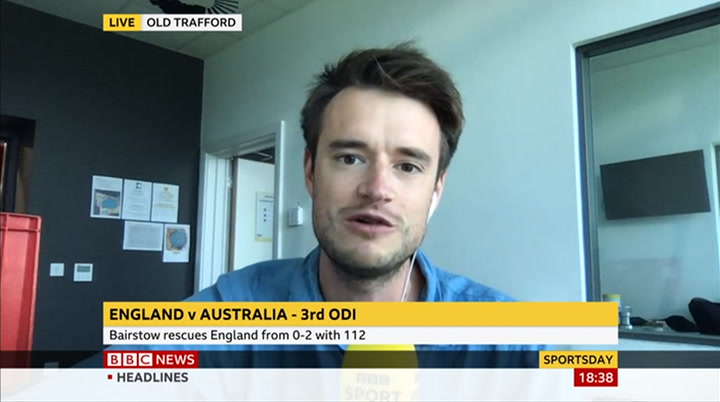 the tentative steps towards the return of fans to professional football matches will continue this weekend after it was announced today that up to 1000 fans will be allowed to attend nine different english football league games this weekend as part of the government's crowd pilots. our sports news reporter laura scottjoins me now. clubs will see this as a step iin the right direction, but what still plenty of work to be done? exactly. it is encouraging but as you say it is capped at 1000 spectators for each of the nonpublic. people thought it might be 10,000 but luton had to pull out as they did not have enough time to repair so there will be fans hosted by middlesbrough, norwich city, blackpool, charlton athletic, a whole city, shows barry, carlisle, morecambe and forest green rubber. but rick perry says he hopes that these pilots are used as a stepping stone to demonstrate that they can hold more fans than just the 1000
6:42 pm 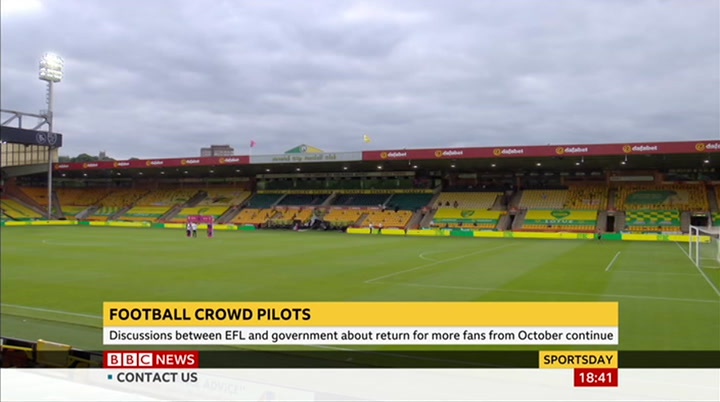 allowed at the moment and they want this clearly from the 1st of october. there is some doubt about whether that 1st of october target is going to be met. notjust for football but for all sorts. that is under review by the government and we know that today sports held a meeting with the secretary of culture with a very much stated their case for the economic situation that they are facing without fans in any great number. and we understand that no decision has been made in very much dcm after going to take stock of the situation and make representations higher up the chain and government about that deadline of the 1st of october but as you say a lot of work still to be done because this isjust as you say a lot of work still to be done because this is just and 1000 fans. but that is an sign nonetheless. thank you very much, laura. let's round up some of the day's other sports stories. and aston villa have signed goalkeeper emiliano martinez from arsenal. they've paid £17 million for the argentinian,
6:43 pm 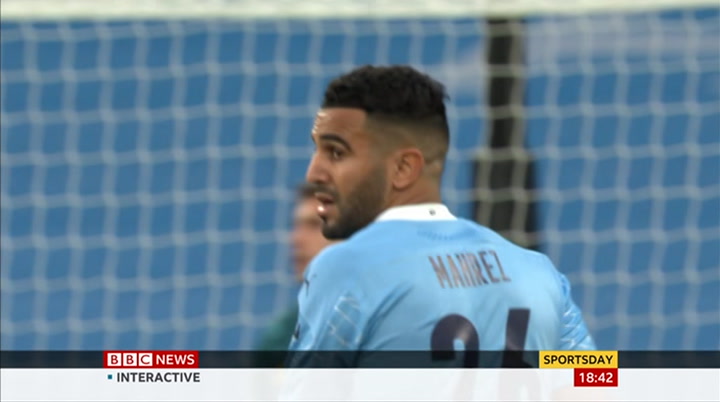 who finished his ten—year career in north london by winning the fa cup and community shield. novak djokovic play for the first time since disqualification from the us open as he reached the third round of the italian open. the world number one beat an italian wild card 6-3, 672 to number one beat an italian wild card 6—3, 672 to progress comfortably in rome. and anthonyjoshua's promoter says his world heavyweight fight against pew level not be postponed again. the fight and she was pushed back because the pandemic and the promoter says the fight will go ahead even if it has to be held behind closed doors. the former head of world athletics has been jailed after being found guilty of corruption. lamine diack, who's been under house arrest for the last five years, was convicted of accepting bribes from athletes suspected of doping to cover up test results allowing them to continue competings, including at the london 2012 olympics. our sports news correspondent alex capstick explains. how severe are these charges?
6:44 pm 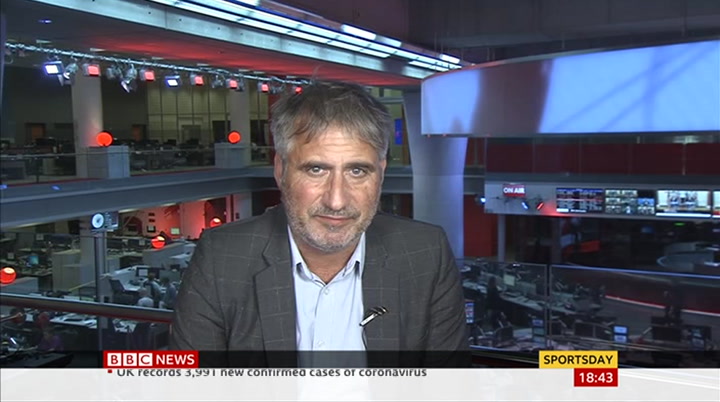 they are very severe. he has been found guilty of corruption and breach of trust and will be given a four year sentence that will be suspended postal because back to a meeting prosecutors said that he had as the work head of world athletics, he was there for 16 years. he had this meeting with the then sports minister of russia and suggested this scheme whereby russian athletes who had doping violations or who may have had to be violations could pay money to have those violations go away, to be buried. in exchange they will be allowed to compete at international events including the london olympics and the world championships in 2013, which were held in moscow. and he made around about £3 million from this scheme was up he was also found guilty of taking russian money to help with a campaign in his native senegal in
6:45 pm 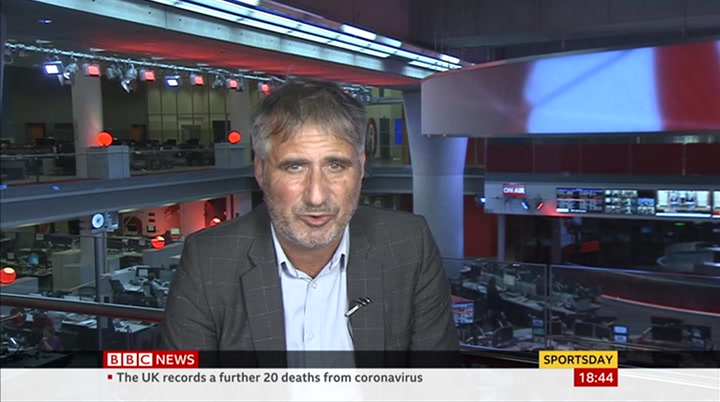 2012 in exchange for slowing down the sanctioning process involved with russian athletes who had been cheating. that is why he is been found guilty alongside his son, and he was given a five—year sentence. although he is in senegal, he fled there after the french investigation began in 2015 and he has stayed there, refusing to leave and all requests recognition for him have been refused. for of them also found guilty and have been givenjail terms. we're up to stage 17 of the tour de france, and primoz roglic has come through his hardest test so far, extending his lead over tadej pogacar to 57 seconds. drew savage watched the action on the steepest stage of the race. friends, but also rival. the tooth of had soared away from everyone so far but today they had to climb higher than
left
right
Borrow Program
tv

A round-up of all the day's top sporting action with the latest scores, news and updates.