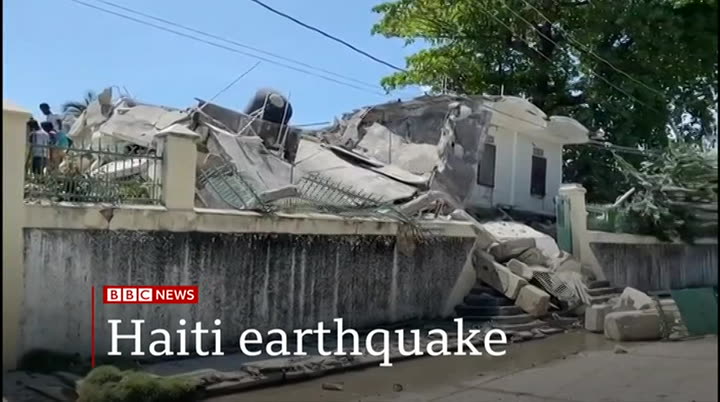 after a powerful earthquake, measuring 7—point—2 magnitude. at least 29 people have been killed. the last major city in northern afghanistan — mazar—i—sharif — reportedly falls to the taliban, as president ghani says that remobilising the military is his top priority. translation: our dear country, afghanistan, is in serious - danger of instability. the reintegration of the security and defence forces is our priority and we are taking serious measures to deal with this. in the uk — there are questions for police, about why it chose to return a shotgun licence to the man who killed 5 people in the uk's worst mass shooting since 2010.some clinically vulnerable children. in england are struggling to get a covid vaccine, nearly four weeks after they were added to the rollout. and a major us study says july was the world's hottest month ever recorded.
7:31 pm 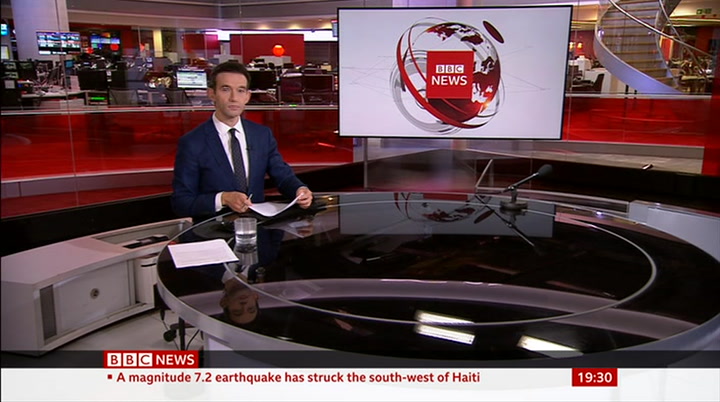 now it's time for the film review. hello and welcome to the film review with me, anna smith. i'm filling in for mark kermode to review this week's releases. there are a lot of films in cinemas this week and i'm going to start with my personal favourite. i'm your man, a genderflip on the pygmalion myth starring downton abbey's dan stevens as a romantic robot.
7:32 pm 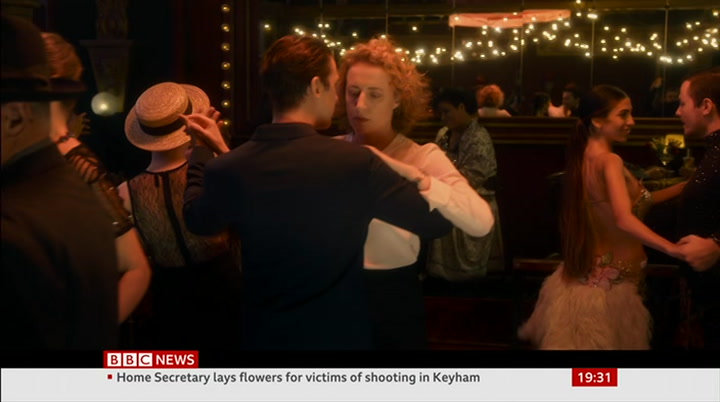 set in berlin, i'm your man is a german comedy drama with a sci—fi twist. it stars the excellent maren eggert as alma, a scientist who is taking part in a trial of humanoid robots to see if they could make realistic life partners. alma's ideal match has been created using algorithms based on her brain scans, her responses and research involving 17 million people. as it happens, alma has a soft spot forforeign men. enter dan stevens as tom, a charmer who speaks fluent german with an english accent. alma is initially sceptical, but when she starts to warm to tom, she plunges into a period of self analysis and self—doubt. i'm your man has a very
7:33 pm 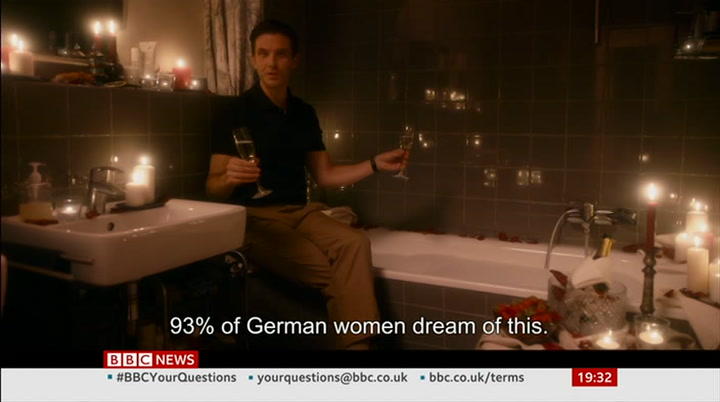 sharp sense of humour, and a pitch perfect dan stevens makes the most of comical misunderstandings between humans and ai. but this also takes a serious look at identity, humanity, attraction and happiness. the set up recalls everything from blade runner to the 2013 sci—fi her. but this is inspired by a short story by emma braslavsky, and directed by maria schrader and the female perspective makes it a distinctly different work. i'm your man is a playful intelligent conversation starter that is as fun to watch alone as it is with a real life partner. he speaks german. it is in cinemas and on curzon home cinema now. my name is guy. sunday should be warm and sunny. just a scattering of drive bys. and i live in paradise.
7:34 pm 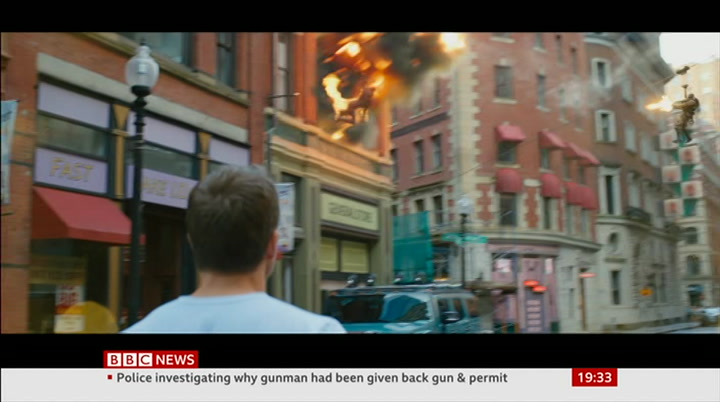 i've got a best friend. this is the greatest cup of coffee of all time. mondays, am i right, joe? now to another charming funny ai character, this time played by ryan reynolds in the disney action comedy free guy. guy is a cheerful bank teller who loves his routine life, from his morning coffee to small talk with his co—worker buddy who is played by lil rel howery. he even shrugs off the daily raids from bank robbers. what he doesn't realise is he is a background player in an open world video game called free city. those violent robbers wearing sun glasses, they are avatars of geeky real world players. when he sees molotov girl, played by killing eve'sjodie comer, he falls for her, not realising she is the real world coder who is trying to prove that her idea is stolen and so a computer game comedy turns into a romantic action thriller with existential angst to spare.
7:35 pm 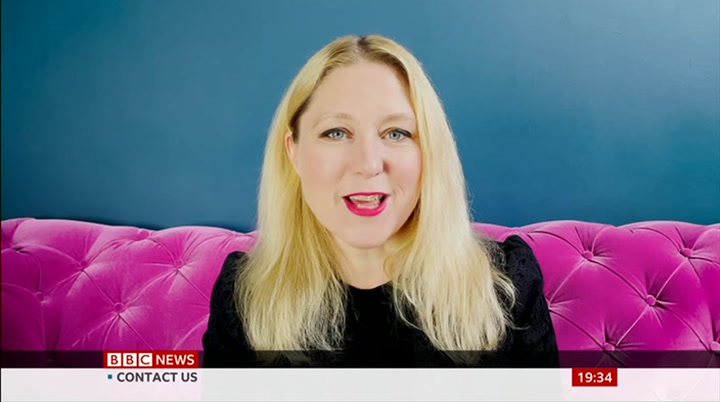 free guy owes a debt to more classic sci—fis than i have time to list, but there are clear parallels with galaxy quest, tron, groundhog day and the matrix. but its biggest influence is perhaps the truman show. likejim carey before him, our innocent hero grapples with the knowledge he has been living a lie and is merely a pawn in a world created for the entertainment of others. this is a much busierfilm than the truman show. this central idea gives the film heart and it's helped considerably by reynolds ability to balance deadpan comedy with sensitive boyish charm, and a dash of deadpool�*s mischief. jodie comer proves her versatility as both her english avatar and the american who created her, although i was a bit disappointed that this genius coder is characterised chiefly by her love of bubble gum ice—cream and mariah carey. still, she shares good chemistry with reynolds,
7:36 pm 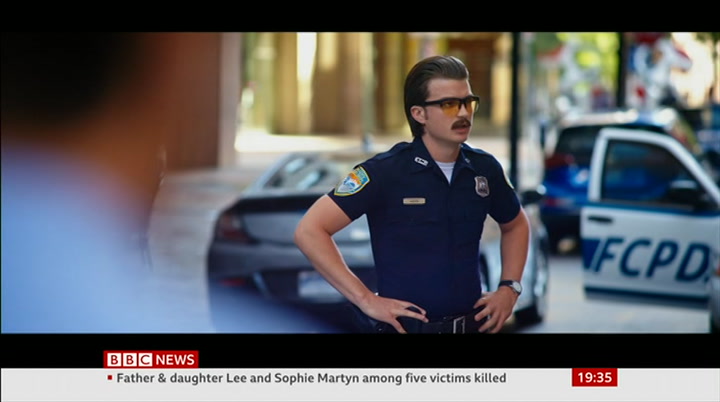 as well asjoe keery, who plays her former creative partner. meanwhile, taika waititi and channing tatum enjoy smaller roles that are amusing, if not hilarious. free guy isn't as powerful as the films it recalls, but it is an enjoyable actioner that brings a pacifist message to the genre, and for a disney film it even takes a swipe at our sequel obsessed culture. bring on free guy two. meantime, free guy is in cinemas now. forgive me, i'm just a bit... sorry, james, i know you said you had an office in board of trade, but... is it possible you actually work at a different branch of her majesty's government? oh my. this is unexpected. a salesman is recruited as a spy in the courier,
7:37 pm 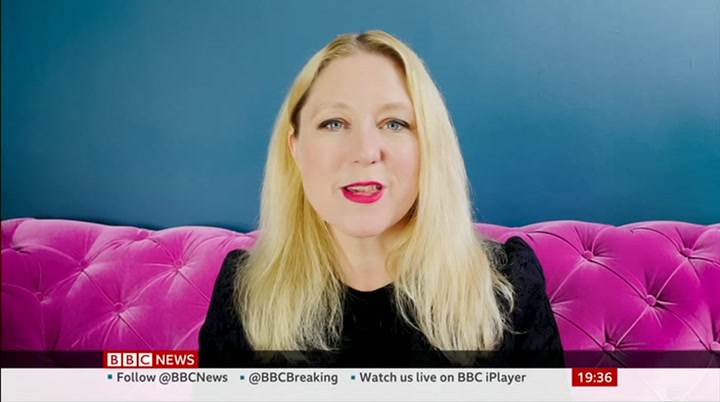 a true story starring benedict cumberbatch. greville wynne is an ordinary british businessman who is surprised to be approached by mi6 and the cia during the cold war. after some debate he agrees to peddle his wares in the soviet union, while forming a partnership with a soviet officer, oleg penkovsky. it is a tall order keeping his work a secret from his wife, played byjessie buckley, but then there is the more pressing concern of the soviets finding him out. dominic cook's period thriller is a quiet but classy watch. and while it's a little exposition heavy, it tells a fascinating story with strong performances all round. i am volunteering to bring back the best source of soviet intelligence you've got at a time where russia and america are on the brink of nuclear war. you talk about using people. for god's sake, use me. the courier is in cinemas now. get out of here.
7:38 pm 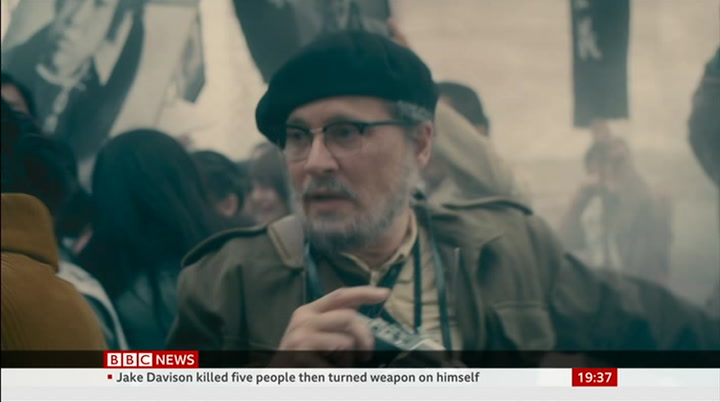 johnny depp also plays a reluctant real life hero this week, in the drama minamata. in depp�*s first release since his lost his libel case against the publishers of the sun newspaper, he plays life magazine photo journalist w eugene smith. smith was instrumental in documenting the devastating effects of mercury poisoning in the japanese coastal city of minamata. this follows his recruitment by aileen, who is played by the japanese actress minami, and his shocking discoveries in minamata, where afflicted families are battling for compensation. andrew levitas�* film feels torn between detailing the fight forjustice, and exploring its alcoholic central character, and the balance doesn't feel particularly even.
7:39 pm 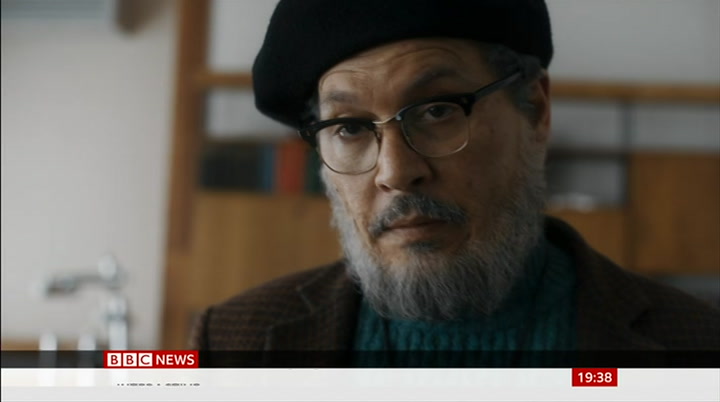 but once again it is a powerful and important story, and it's depp�*s best for some time. no—one has really covered it. i mean, it's in the god damn fish. and that's all those poor people have to eat. the times has a tokyo desk. and we have deadlines literally one hour. - so that sounds to me like, bob, time is of the essence. and you know that the cover up is going to be as much of a story as the story itself. minimata is in cinemas now. i love a tense real time thriller, and the mexican film new order did not disappoint. the winner of the grand jury prize at last year's venice film festival,
7:40 pm 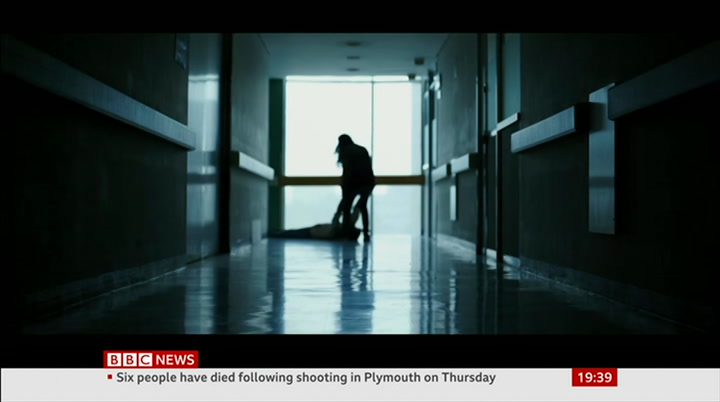 new order is not an escapist thriller. it's a disturbing dystopian nail biter about escalating class warfare in mexico city. as a lavish wedding is taking place, riots are erupting in the streets and the peril spills into the festivities. meanwhile, the bride sets off on a dangerous mission to help a former member of staff. a gripping and disturbing thriller, new order is another powerful film from after lucia director michael franco, and it will stay with you long after the credits roll. it is in cinemas now.
7:41 pm 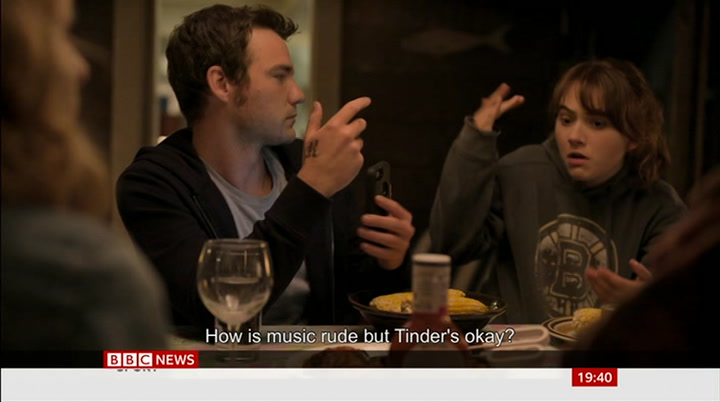 finally, a musical crowd pleaser called coda, which stands for child of deaf adults. an american remake of the french film la famille belier, it stars emilia jones as ruby, a 17—year—old who is the only hearing member of her family. outside of school, her spare time is spent acting as an interpreter for her parents and brother and working on theirfishing boat. but ruby has a secret. she loves to sing. spurred on by her teacher, she considers a career in music but she fears her parents won't support her ambitions. funny and unconventional, ruby's parents bring wit
7:42 pm 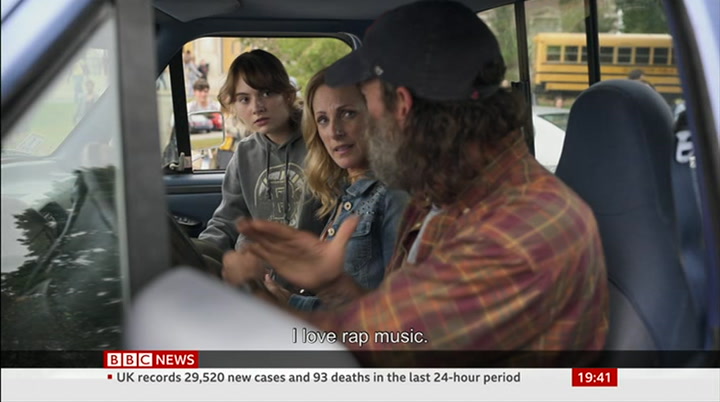 and warmth to the story, and crucially they are played by deaf actors, troy kotsur and marlee matlin, who won an oscar for children of a lesser god in 1986. as for the hearing cast, emilia jones, who is the daughter of singer aled jones, is terrific, though eugenio derbez feels miscast as her flamboyant music teacher. still, i was prepared to forgive and forget when it came to the emotionalfinale. coda is an uplifting, inclusive tear—jerker with a flavour of the tv series glee, and it is a real step forward when it comes to the representation of deaf characters on screen. it is in cinemas, and on apple tv plus now. thanks for watching the film review with me anna smith. i will be back next week. meantime, stay safe.
7:43 pm 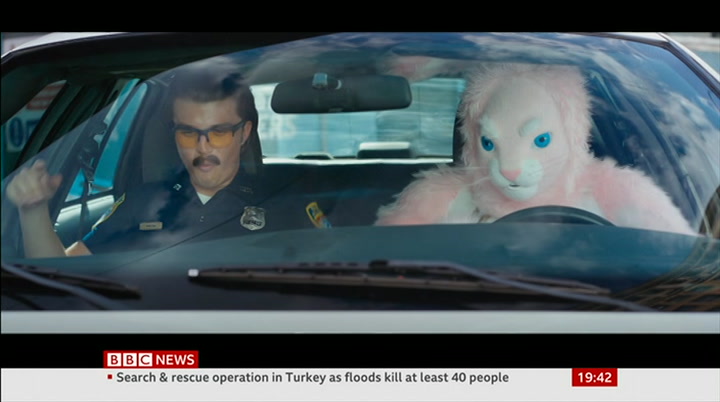 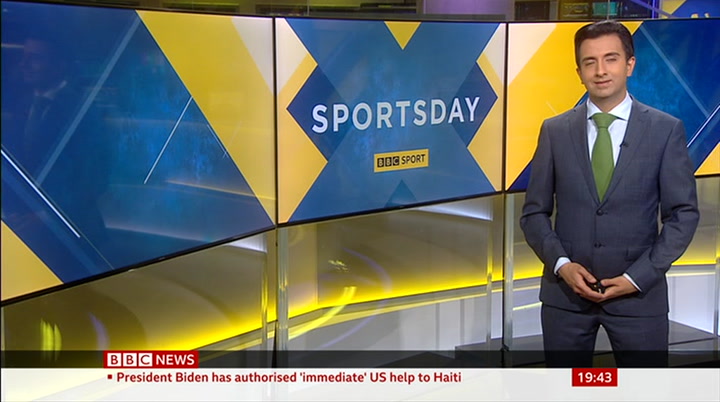 welcome along, thanks forjoining us on this opening weekend of the premier league season. fans are back, in both home and away ends, and that saturday feeling has returned. seven premier league games today, all with their own fascinating sub—plots, but we begin with today's early match at old trafford, as manchester united put on a show, beating rivals leeds united by five goals to one as patrick gearey reports: two uniteds sharply divided. if you wanted a game that highlighted the difference having a capacity crowd makes, here it was. a chance to follow the expectation with this goal. the reaction a long time coming.
7:45 pm 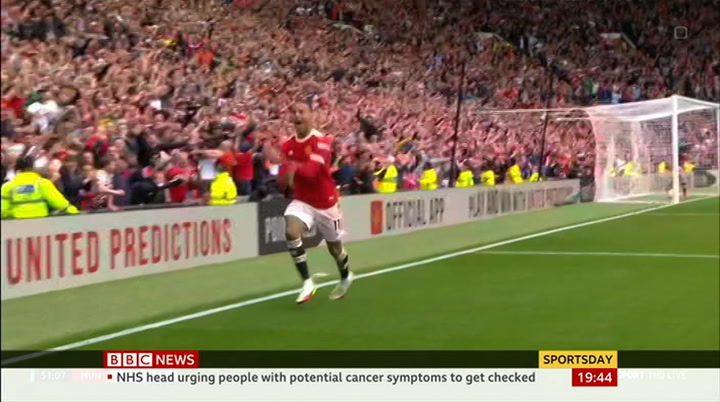 the man coming onto the ball is in their right back, luke ayling. absolute mayhem. commentator: there's an early contender for goal of the month. what a moment, butjust a moment. mason greenwood was born in bradford but came to manchester, here completely bypassing leeds. 2-1. now manchester united pounced. fernandes again, his shot cleared not off the line but, as it turned out, just over it. goal. while leeds want to be full—fat going forward, they were thin at the back. one pass, one shot. fernandes, three, manchester united, four. and still they advanced. now with pogba. "play it right", said fred, and he made it five. some start. the two uniteds comprehensively divided. patrick gearey, bbc news. it was a great performance by the team and having the fans back gave them joy and against a big rival like leeds. i think today was almost
7:46 pm

Anna Smith gives her take on the best and worst of the week's film and DVD releases.