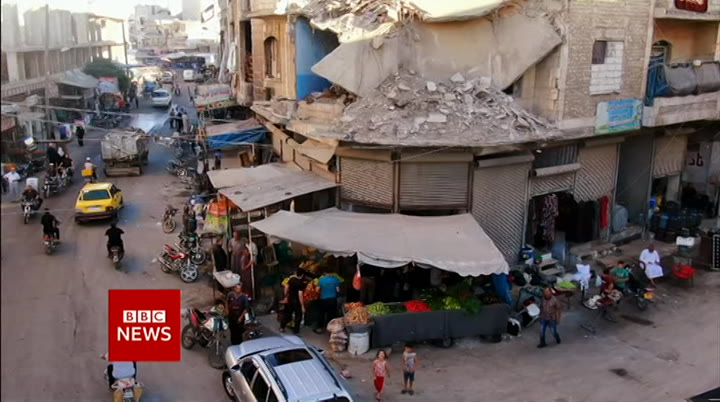 this is bbc news with the latest business headlines for viewers in the uk and around the world. the new employent crisis. uk businesses, desperate to hire, can't find the workers needed. the lira takes yet another plunge. we'll gauge the impact of turkish president erdogan�*s economic policy. and what to do about christmas waste, we look at the solutions to an annual problem.
5:31 am 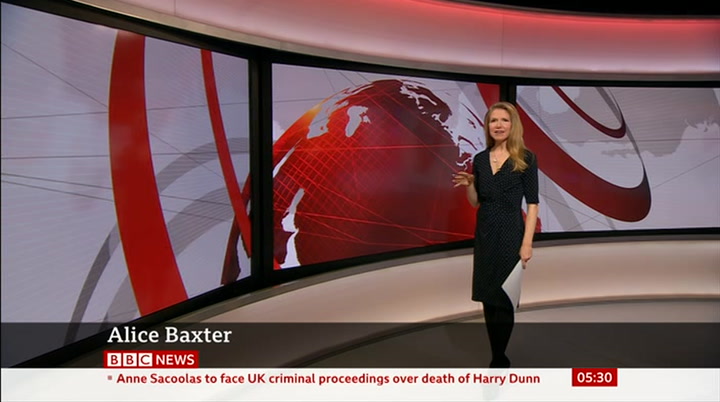 the uk jobs market is awaiting the next set of figures expecting to record the highest ever number of vacancies exacerbating the staff shortage problem faced by many businesses. last quarters figures showed thatjob vacancies had reached 1.2 million due to post—brexit labour shortages and the post—covid reopening. many businesses are struggling to recruit as the latest report from manpower shows the jobs market hiring intentions has accelerated to a 30—year high. nina warhurst reports. who could have predicted this? from a pandemic that punished the economy, lots ofjobs are now available and not enough people to fill them. this hotel in manchester bounced back to a high number of bookings but despite recruitment drives and training new faces they are 30 members of staff down. adrian, where is everyone gone then?
5:32 am 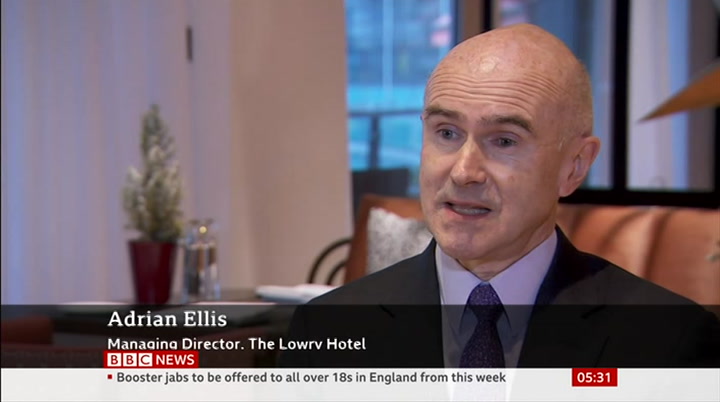 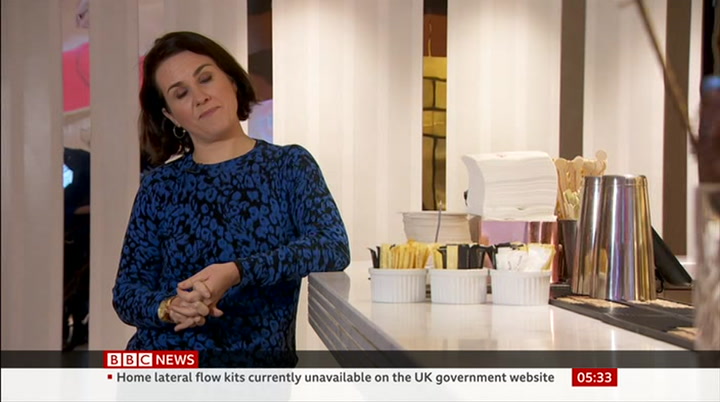 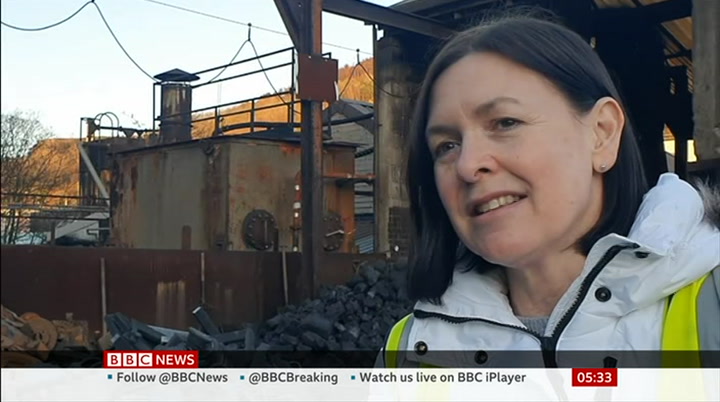 do pay more than we pay the staff that we have in our warehouse, as a little bit of compensation for the working environment.— environment. keeping fewer rooms epen. _ environment. keeping fewer rooms open, delaying - environment. keeping fewer- rooms open, delaying deadlines, failing to expand all consequences of not having enough people. increasing wages can impact prices more generally, putting more pressure on family budgets. nina warhurst, bbc news. joining me now is chris grey, director of manpower uk. chris, good to speak to you this morning. many experts were anticipating high unemployment numbers coming out of the coronavirus lockdowns and furlough scheme, why hasn't this happened? that is a good question. the furlough scheme ended in september and most of the people coming off furlough either went back into the roles from which they were furloughed or they were really skilled into other roles with the same employer. and also the end of
5:35 am 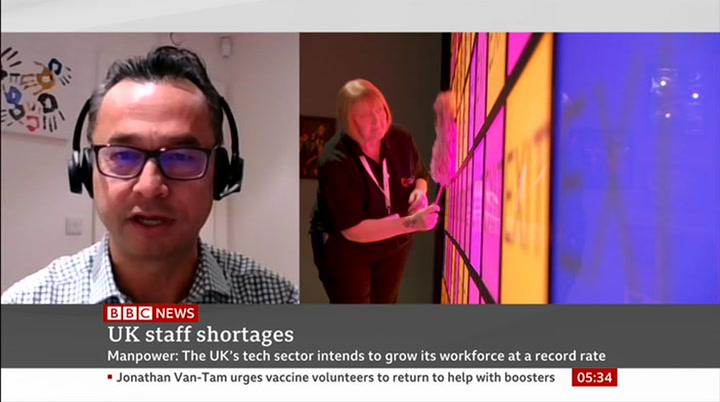 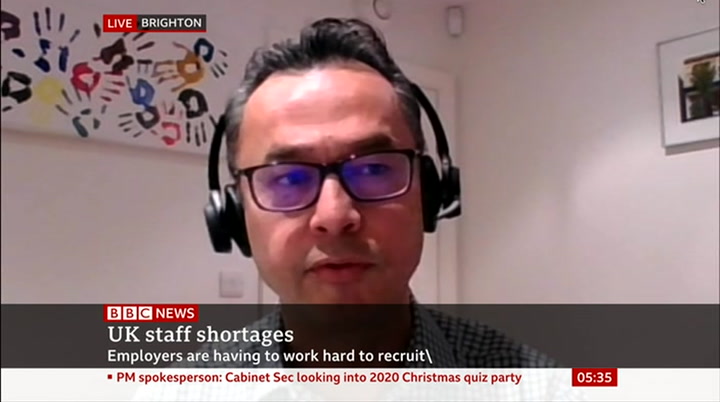 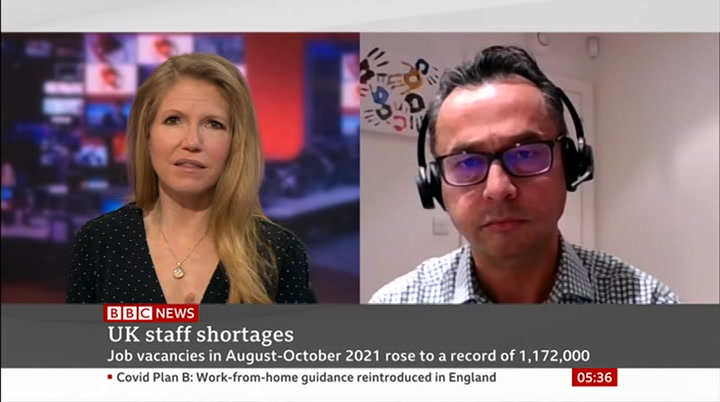 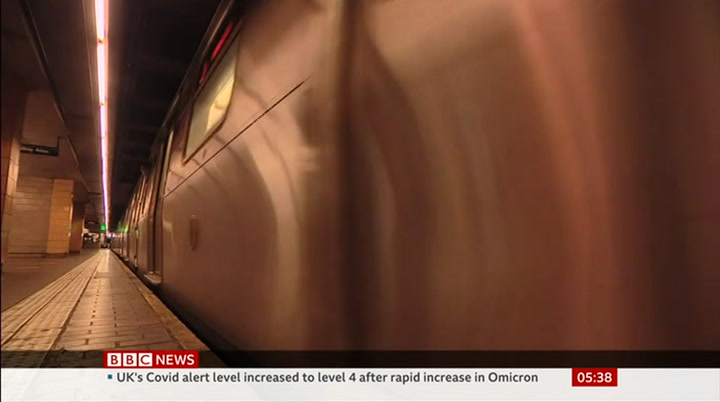 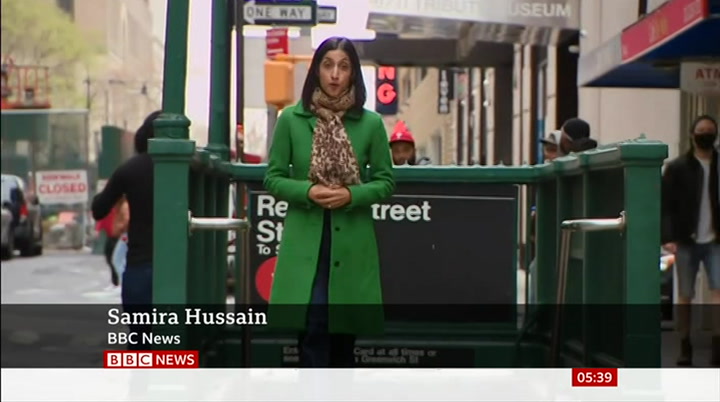 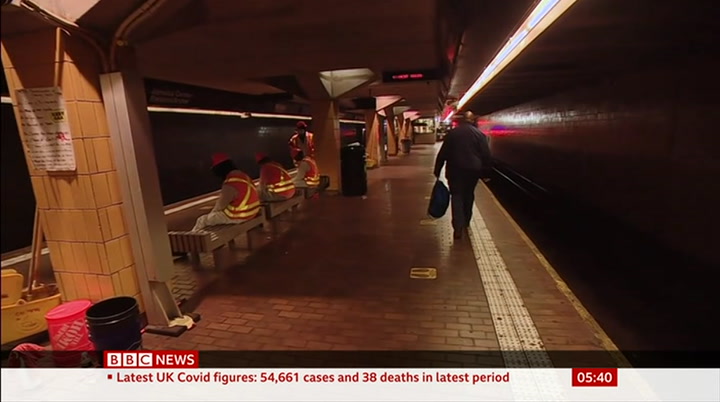 from retirement. samir hussein, bbc news, new york. the turkish lira has tumbled to an all—time low, hitting record depths against the dollar and losing nearly 30% in value in the last month alone. annual inflation in turkey has also risen by over 21%. the currency has been in freefall as president erdogan continues to support interest rate cuts despite surging inflation. concern is also rising that the country's central bank will cut rates even further later this week. joining me now is guido cozzi, professor of macroeconomics, university of st gallen. what is causing the currency crisis in turkey? certainly, the overall uncertainty of monetary policy because we have seen quite a massive set of replacement in
5:42 am 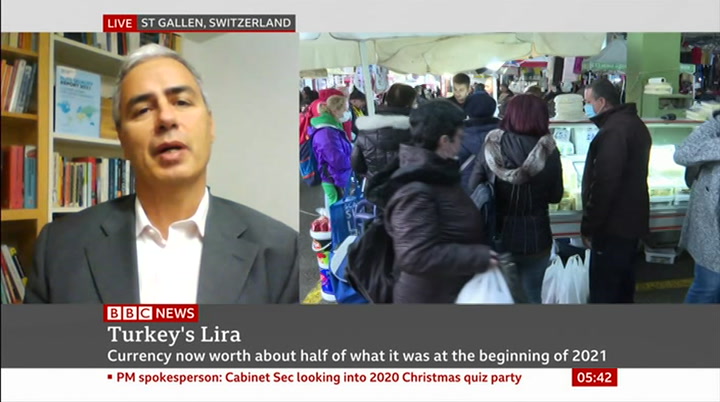 the position in the central bank and in the government so in this general situation of turbulence and inflationary pressures everywhere and certainty about interest rates everywhere, adding another level of leadership uncertainty, it is certainly, uncertainty, it is certainly, uncertainty is certainly implying that the financial markets and foreign exchange markets and foreign exchange markets freak out and tend to escape from unsafe currencies. how is the rising inflation figure affecting the economy and the people of turkey? it is affecting the economy in subtle ways. something that strikes is that given nominal
5:43 am 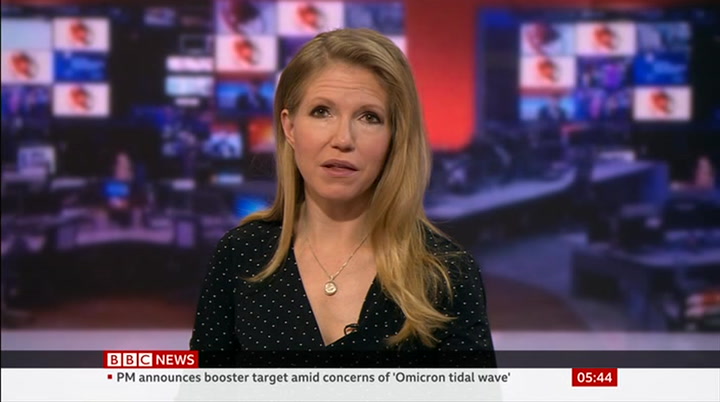 with the investigation. stay with us on bbc news, still to come: what to do about christmas waste? we look at the solutions to an annual problem. saddam hussein is finished because he killed our people, our women, our children. the signatures took only a few minutes, but they brought a formal end to 3.5 years of conflict — conflict that has claimed more than 200,000 lives. before an audience of foreign leaders, the presidents of bosnia, serbia and croatia put their names to the peace agreement. the romanian border- was sealed and silent today. romania has cut itself off - from the outside world in order to prevent the details - of the presumed massacre
5:46 am 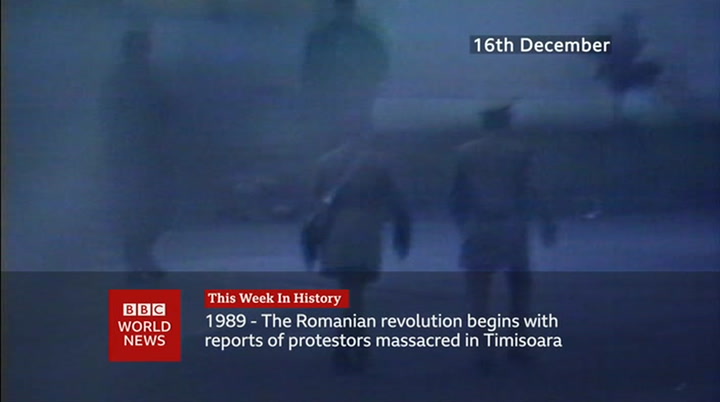 in timisoara from leaking out. from sex at the white house to a trial for his political life — the lewinsky affair tonight guaranteed bill clinton his place in history, as only the second president ever to be impeached. stay with us on bbc news, still to come: prime minister borisjohnson faces a rebellion by his own mps — in a commons vote on new covid rules for england as 0micron cases increase. donald trump's former chief of staff, mark meadows, is being referred for criminal contempt of congress charges for refusing to testify in an investigation into the capitol riots. us stocks have dropped ahead of a key federal reserve meeting later this week.
5:47 am 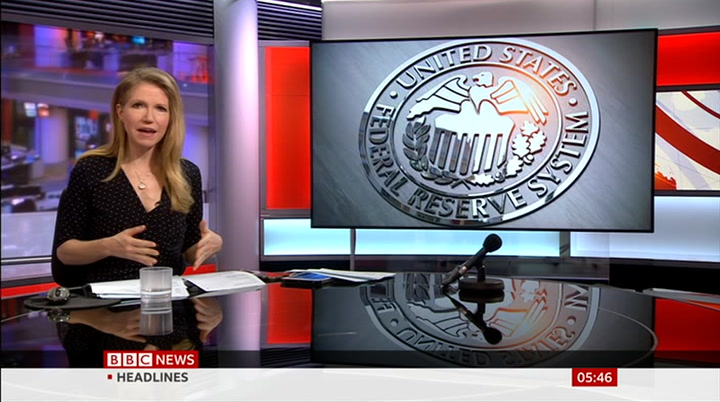 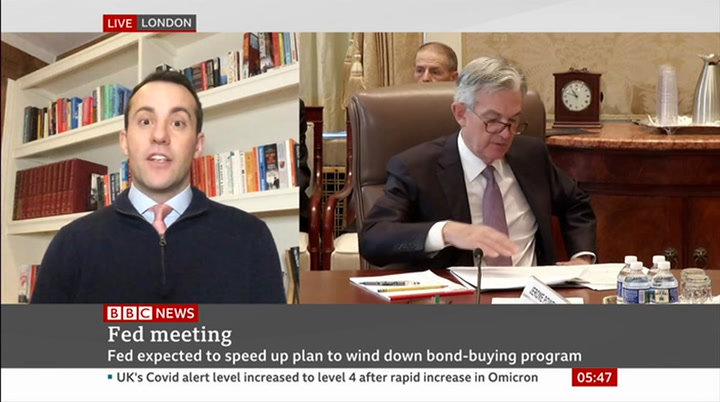 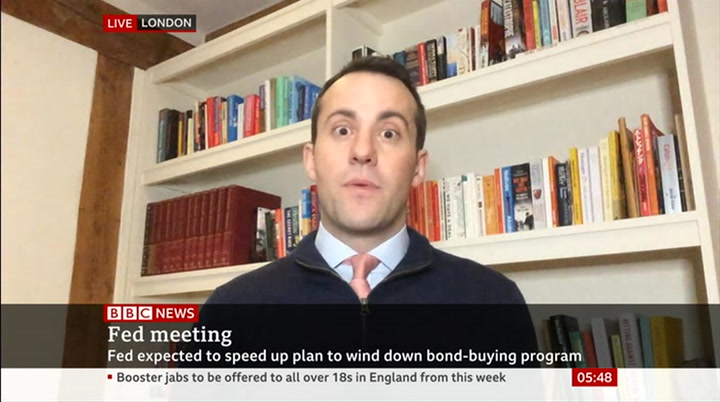 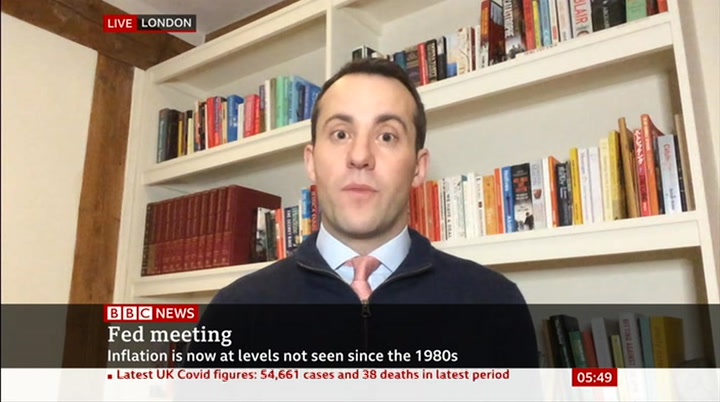 spending and transfer spending to goods where there has been big inflation. 6.8% year—on—year in the us and that is entirely driven by its consumption. what 0micron will do is not only slow overall economic growth but push up inflation even more into the goods sector, really uncomfortable balance for any central to have to deal with. really good to check with you this morning. as the days tick closer towards christmas, the retail machine cranks up to full speed, shopping for presents, festive foods and decorations to brighten up your home. but it's estimated that a0 million christmas crackers head straight to landfill once the cornyjoke has been read out. joining me now is kate hardcastle, consumer expert, insight with passion. we do create a huge
5:51 am

amount of waste at christmas, but surely much of it is recyclable these days isn't it? you would like to think so but unfortunately in most of the research, it does not seem to be the case and i think that is down to almost the hierarchy of needs. when we are shopping, particularly at emotional times of yellow christmas, thoughts around sustainability and environmental impact tend to move down the list and start to think about availability and price affordability and this year consumers are very concerned that this has to be a good christmas, trying to make up good christmas, trying to make up for what they felt last year to be very challenging time and retailers are trying to make sure their wares are affordable. that environmental messaging that we had particularly in october and november around cop26 does not seem to be relevant in either
5:52 am 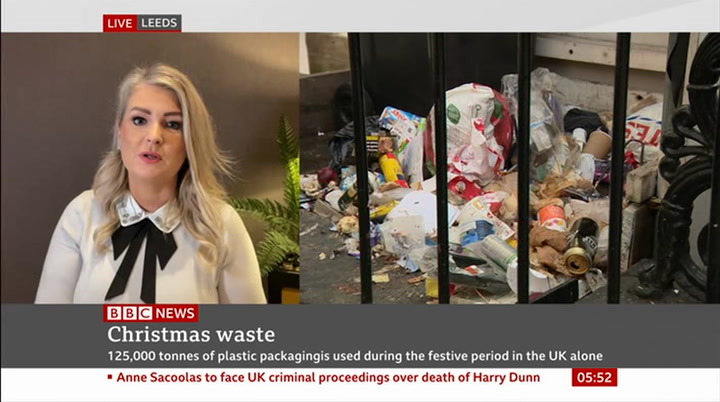 and they vibrancy to the economy because it tends to be this start—up organisation is that will push forward the change and that social media helps to spread the word. christmas tree rental is not usually popular but it is starting to grow. more tutorials about this idea of perhaps remaking, reusing, recycling christmas decorations, making your own christmas crackers. businesses enable that, support that and in the long run we will certainly win but more than anything it is about consumers trying to recover the value of christmas. it has to be perhaps one that we associate with the real meaning of christmas. i would imagine that you do believe that manufacturers should be held more accountable for producing items that can easily be more recyclable? easy to know which _
5:54 am 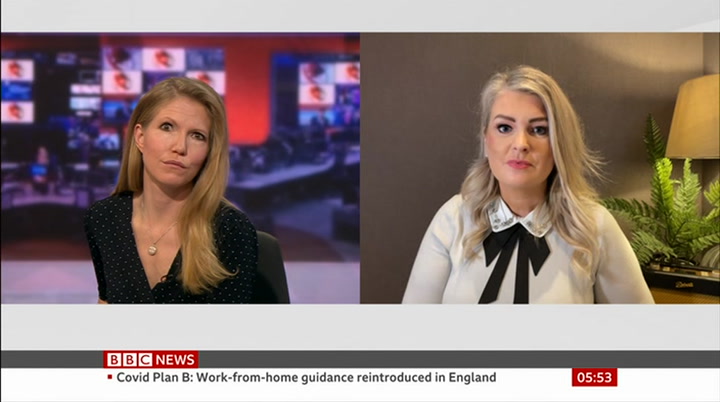 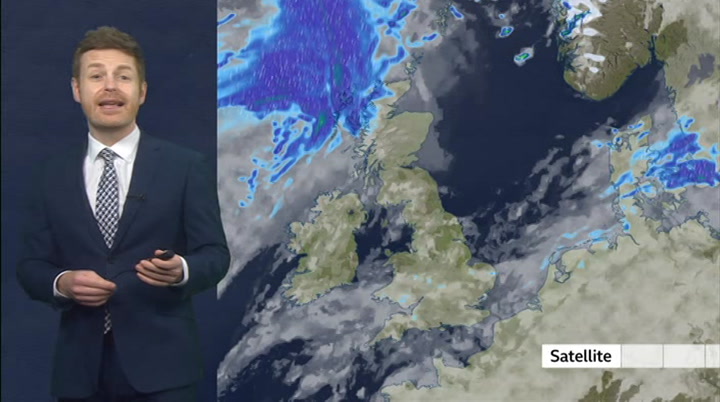 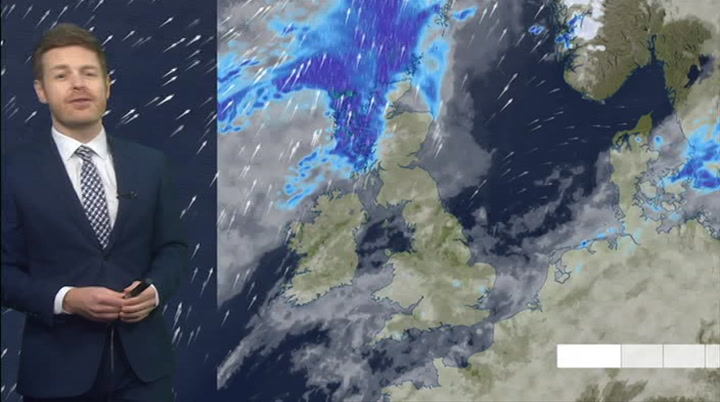 which will continue to build through the course of the week, but weather fronts are grazing the north—west of the uk. so, for ourfriends in the western isles, it's going to be wet and windy at times. we are expecting some rain or so in 0rkney and shetland. perhaps a little bit of rain around the lowlands and south—western areas of scotland, but i think eastern areas, in fact all along the east of the country, i think there will be some brightness around. and temperatures typically around 7—9 degrees, but southern areas, london, cardiff, plymouth with the cloud and the murk hanging around, that mild air from the south, it will be around 12 degrees in one or two spots. here's the weather map for wednesday. so, again, high pressure in the south, weather fronts grazing the north, but increasingly these weather fronts will bring less rain as we go through the course of the week. so, more than anything, it's just an area of cloud with some dampness here across parts of scotland and northern ireland. it's because it's high pressure starting to build in from the south. and look at these temperatures — double figures right across the board midweek. now, this high pressure is going to anchor itself across the uk thursday and friday, and i wouldn't be surprised
5:57 am 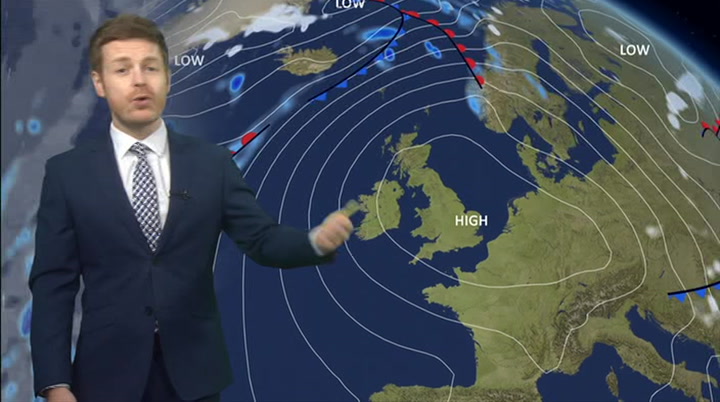 if it stays here, well, right up till christmas quite possibly. this means generally settled conditions across the uk, light winds, with some fog in the morning. still mild on thursday, but i think gradually what we'll find is these temperatures, even though we'll have high pressure, gradually these temperatures will ease so down into single figures by the time we get to the weekend. but i think it's going to stay mostly settled for the rest of the week. bye— bye.
5:58 am 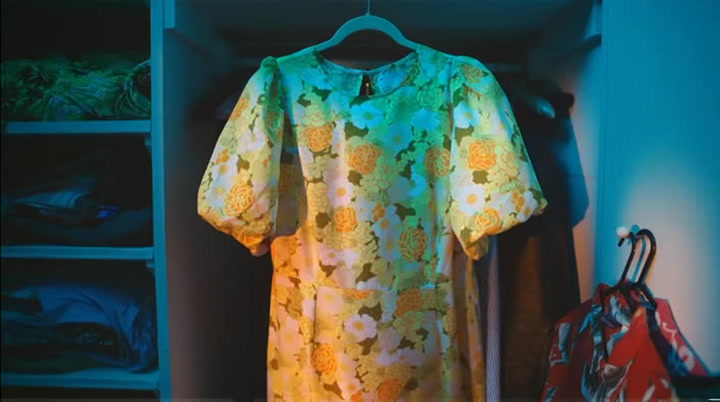 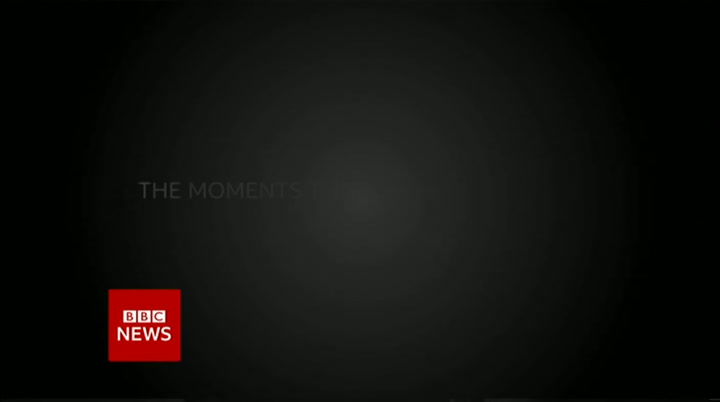 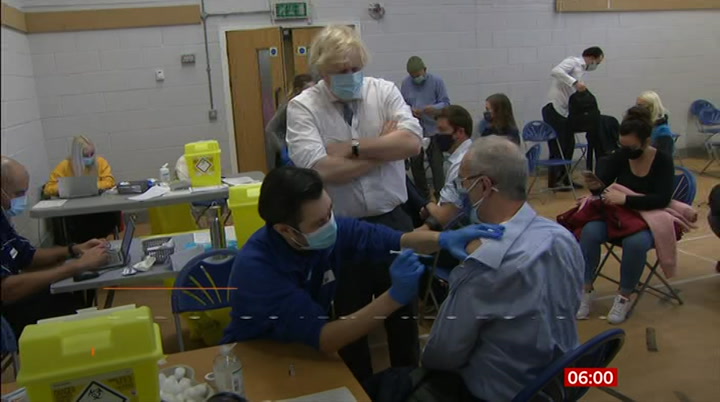 good morning, welcome to breakfast with sally nugent and dan walker. 0ur headlines today. the rebellion over new covid rules — boris johnson faces what could be his biggest revolt from conservative mps. the call goes out for volunteers to help at vaccination centres, after half a million boosters were booked in england on monday. more than two years after harry dunn was killed in a road accident, an american woman is due to face criminal proceedings in the uk. the reality of being the victim of online abuse, as mps call on big tech companies to take tougher action. i was utterly shocked, because ijust felt like, "where did that come from?" itjust made me feel disgusted.
6:01 am

plenty ofjobs — where are the people to fill them?
left
right
Borrow Program
tv

The latest business news with informed analysis from the world's financial centres.