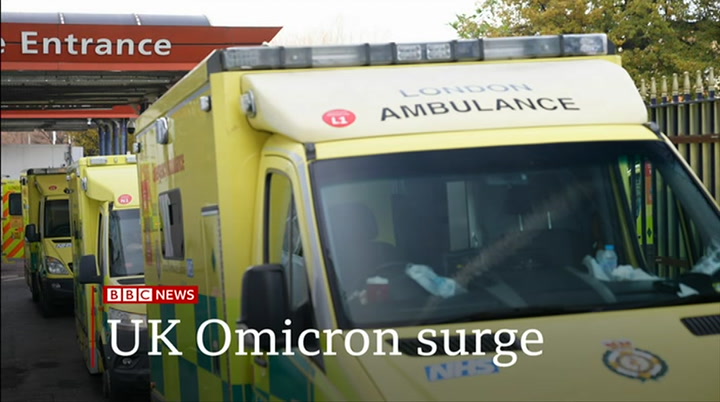 this is bbc news — with the latest headlines: in the uk, the health security says it is time to be cautious about social interactions and refuses to rule out tighter covid restrictions before christmas in response to the rapid spread of the omicron variant. there are no guarantees in this pandemic, i don't think. at this point, we just have to keep everything under review. labour has called on the government to set out a clear plan for covid restrictions over christmas and into the new year. some action is necessary, sage have been clear about that. they were clear on thursday. since then, we've seen nothing, heard nothing from the prime minister. germany bans british travellers and the netherlands goes into full lockdown — as europe ramps up its fight
3:01 pm 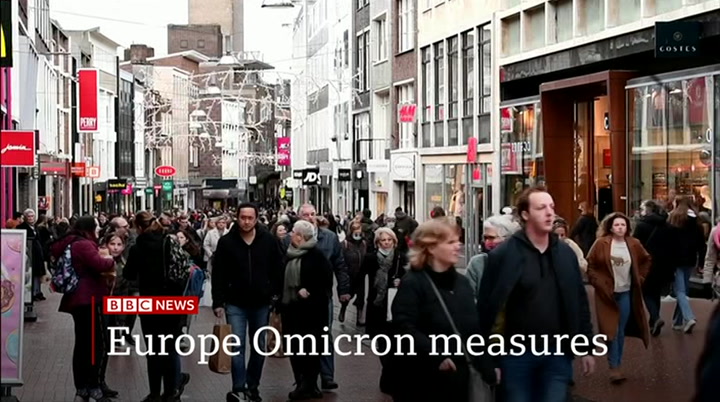 against the spread of omicron. the uk's brexit minister, lord frost, resigns — citing concerns about what he called the government's "direction of travel." and, coming up, the bbc is in nigeria — on the trail of one of the most feared and powerful organised crime groups in the world. good afternoon and welcome to bbc news. the health secretary, sajid javid, has urged us all to be cautious in the run up to christmas and says he can't rule out further restrictions as the government continues to battle the fast—spreading omicron variant. mrjavid said seven people have now died after contracting omicron and it was already the dominant strain in england
3:02 pm 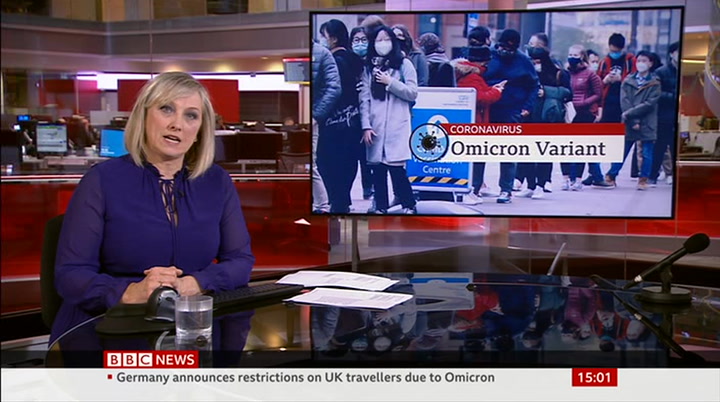 as well as in scotland. sanchia berg reports. # driving home for christmas...# to the sound of christmas songs, people queued this morning forjabs outside a chilly wembley stadium. omicron accounts for an estimated 80% of cases in london now. people are trying to protect themselves and their family christmas plans. i would prefer to have it done before christmas. i have an elderly grandfather who is 90 years old so i want to be able to see him and get this over and done with. as soon as i heard that they have an event here where they are giving the boosters out, so i decided to book one immediately for myself. it feels really good. but the virus is spreading so rapidly, the health secretary didn't rule out new restrictions even for next week. there are no guarantees in this pandemic. i think at this point we have to keep everything in review. he urged people across the country to be cautious in the days ahead. if i'm going to see my mum
3:03 pm 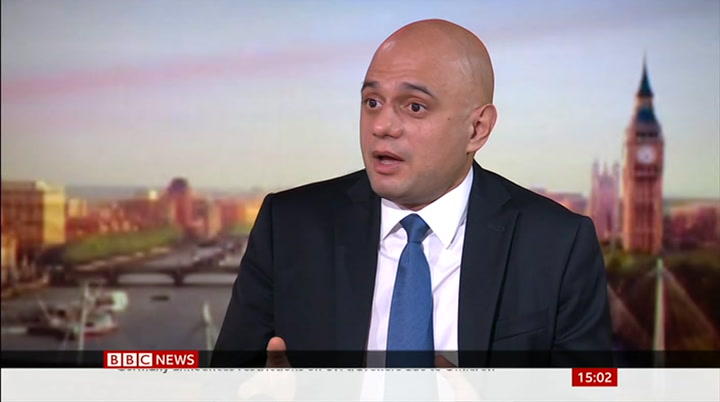 for example, who is very elderly, like most older people, she's more vulnerable than younger people, i will take a test and i mightjust not have the usual amount of hugs i get from my mum. you just take a little bit of caution and i think that's a sensible response but the most important thing that anyone can do right now is to get boosted. earlier this week in central london people were still out and about, but venues were generally quieter now as the variant spreads and scientist warn they cannot say how severe it will be. frankly, the evidence is not there that it is either less severe or more severe than the delta variant. we just don't know, but what we do know is that the cases are rising very fast. so far, there are 85 patients in english hospitals with omicron and seven confirmed deaths, but the health secretary said they were typically infected over a fortnight ago, well before omicron became the dominant strain.
3:04 pm 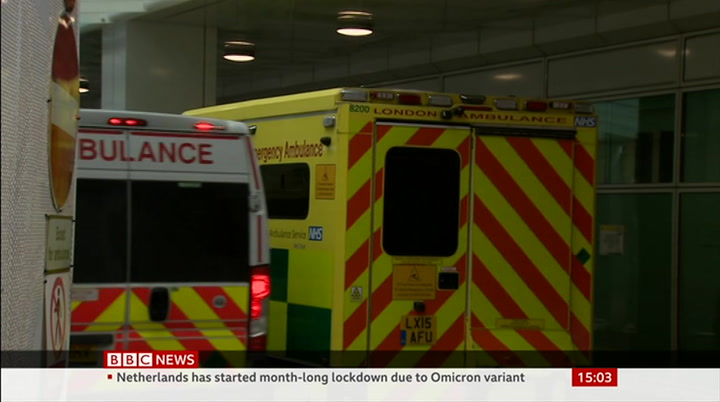 sanchia berg, bbc news. if borisjohnson does decide to go for more restrictions, he could face considerable opposition to them from within his own party. his chief brexit negotiator, lord frost, has resigned from the government — and among the reasons given were his opposition to vaccine passports and further restrictions. here's our political correspondent, charlotte rose. the reaction to news of the chief brexit negotiator, lord frost's resignation came quickly, with members in a whatsapp group of 100 tory mps describing it as a very worrying and a disaster. in the images of the messages first broadcast by sky news, the culture secretary, nadine dorries, steps in to defend the prime minister, telling mps to show a bit of loyalty to the person who won an 83—seat majority and delivered brexit. the response — she is removed
3:05 pm 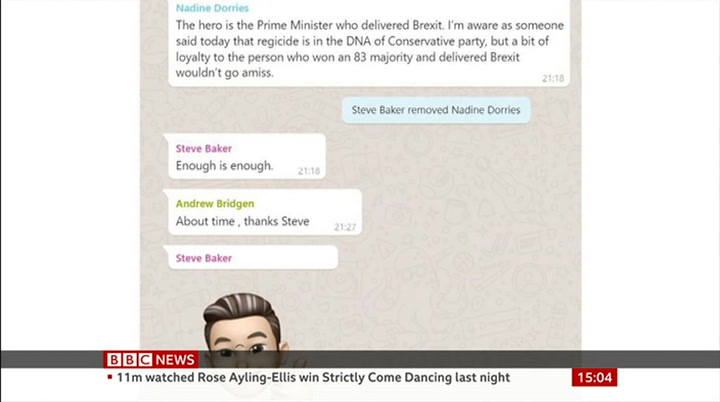 from the whatsapp group by senior brexiteer steve baker, who says enough is enough. reacting to the news this morning, the health secretary paid tribute to lord frost. i'm sorry to see him go. i think he's been an outstanding public servant. he's done great things for this country, not least in helping to get brexit done but he's resigned out of principle. i think you can see that. i know all about resigning from government out of principle, and he has made that decision. and many conservative backbenchers agree with him. the pm suffered his biggest rebellion over that issue last week when 100 of his own mps voted against him. many of the things he worries about, i and many of my colleagues worry about. we want to see the conservative party as a low tax party going forward and we don't want our civil liberties to be restricted. labour says his departure leaves the prime minister in a weaker position. where the prime minister should be leading at the moment, he's in hiding, hiding
3:06 pm 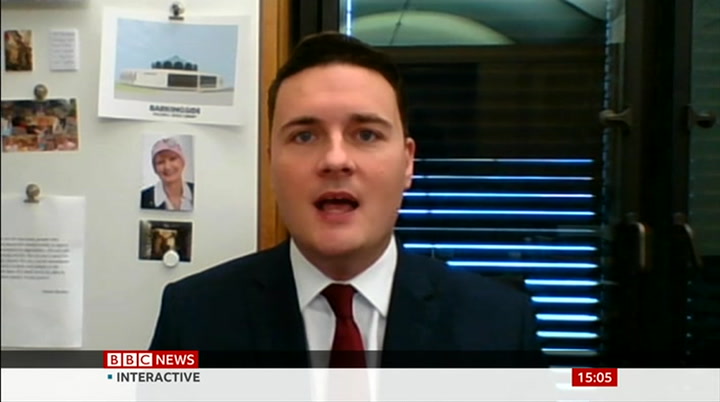 from his own party, hiding from his backbenchers, and failing to lead, now, that's an abdication of responsibility and our message to the government is you don't have to be held hostage by your own backbenchers. you can work with labour. although sajid javid was keen to insist this morning the government would do whatever is necessary to curb the rise of omicron infections, all of this leaves the pm with less room to manoeuvre. it seems the resignation of the government's key man in brussels may have an impact on policies much closer to home. charlotte rose, bbc news. several european countries have introduced tough new restrictions to tackle covid, as the omicron variant spreads rapidly across the continent. a month—long lockdown has come into force in the netherlands. the dutch prime minister, mark rutte, said immediate action — including the closure of schools — was needed to avoid hospitals being overwhelmed. denmark, ireland and switzerland are all stepping up or re—introducing restrictions — but they've stopped short of full lockdowns. anna holligan reports.
3:07 pm 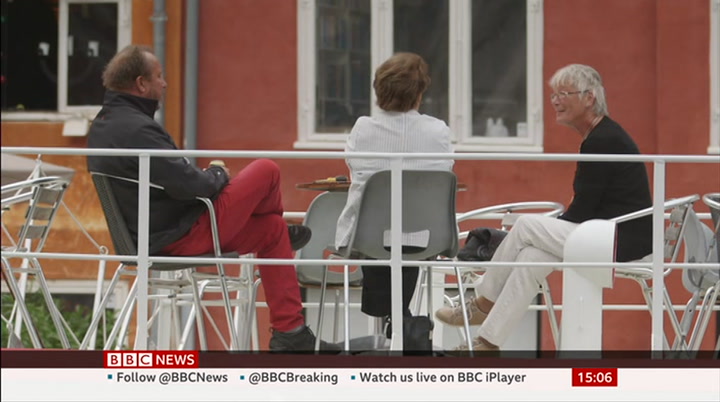 a final flourish of festive cheer before dutch cities shut down for christmas. department stores and toy shops weren't ready for this level of footfall. while hair and beauty salons squeezed clients in for a last—minute shave. translation: it was nice to go to the city for a little _ while before the lockdown. it's too busy everywhere, but i have to come to get presents before the christmas holidays. under the new measures outlined on saturday, all nonessential stores, bars, restaurants, and other public places, are to shut from sunday. essential shops, such as supermarkets and pharmacies, must close by 8pm. and, as previously announced, schools are closed until at least january 9. the prime minister delivered the message in a sombre tone. translation: omicron is spreading
3:08 pm 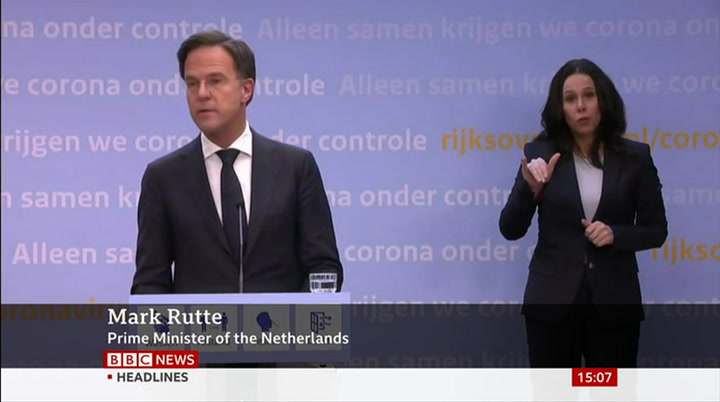 even faster than feared, _ and so we must intervene now to prevent much worse. this is one of the most popular shopping streets in the heart of the hague, and normally at this time of year it would be heaving. the dutch prime minister said the response to the omicron variant was unavoidable. but the government's critics argue the crisis is partly of their own making — the slow response to the delta variant combined with the slow roll—out of the booster vaccination programme — which has meant hospitals have no extra capacity to deal with an impending surge of omicron cases. the dutch are seeking to speed up that booster programme — the over—60s have just been invited to get theirs, and it's hoped that within a month everyone in the netherlands who wants a booster shot will have the chance to get one. this is usually a highly organised society — the dutch don't like chaos. there is some good news. father christmas will still be
3:09 pm 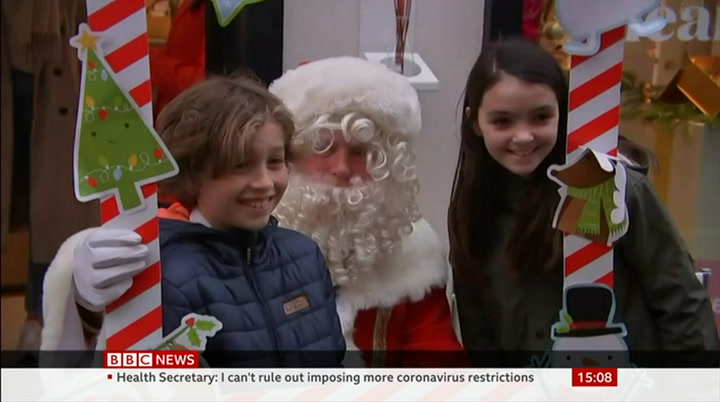 allowed to deliver presents. his message to the nation — merry christmas, happy lockdown. this afternoon, the uk health security agency has updated us on the latest number of confirmed omicron cases. there were 12,133 new confirmed omicron cases in the uk — though the real number is expected to be far higher because it takes time to confirm cases are omicron and not all positive tests are sampled. in total, the uk health security agency say there have been 37,101 cases of omicron. richard rogers, one of the leading architects of his generation, has died — he was 88. he created some of the most talked about buildings of the last 50 years, including the pompidou centre, in paris, with its facade of pipes and ducts, and the equally startling lloyds building in london.
3:10 pm 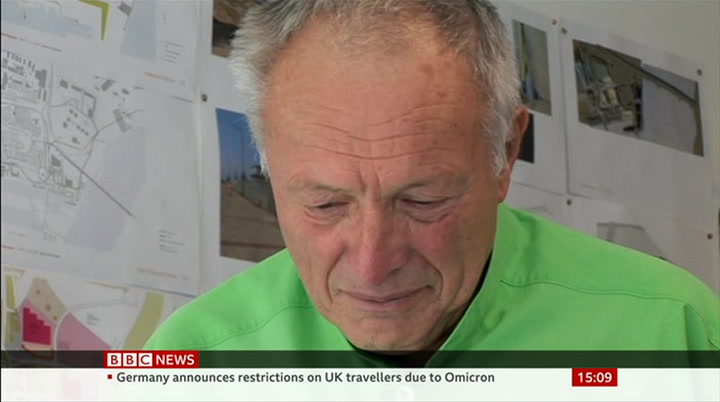 more recently, he was behind heathrow�*s terminal 5 and the millenium dome. piers corbyn has been arrested on suspicion of encouraging people to attack mps' offices. the met police said the arrest related to a video filmed during saturday's rally in london against covid restrictions. he was arrested in south london in the early hours of sunday. the force hasn't named mr corbyn, however it previously said it was assessing a video which appears to show him calling for direct action. a murder investigation has been launched following the death of a woman in north belfast. she has been named locally as caoimhe morgan. her body was found in a house in harcourt drive on saturday morning. a 30—year—old man arrested on suspicion of her murder and remains in custody. now on bbc news, the nigeria—based black axe is one of the most feared
3:11 pm