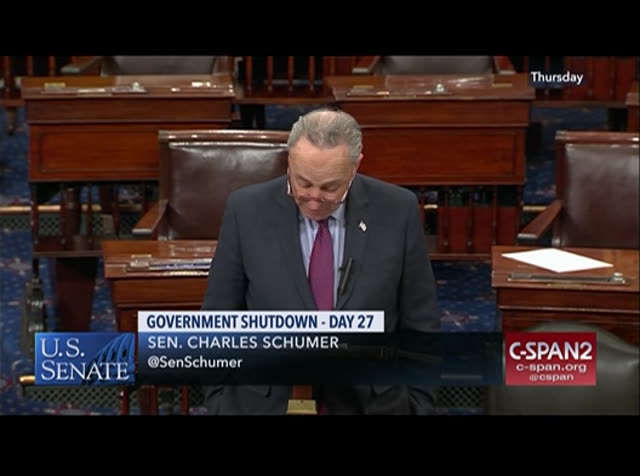 of leader mcconnell are echoing the overwhelming will of the american people. so we urge our colleagues to think about this. we know that president trump is not interested in ending the shutdown. leader mcconnell knows he has end this shutdown. the only reason we're in this prolonged stalemate is that far, my friend the republican leader refuses to take up any legislation to reopen the government. we should do it now. i yield the floor. >> senator kaine, you are yielding to me to talk about your department of the bills, okay. and let me just thank you for your vigilance. i mean, when we have 800,000 federal employees across the country and their families hurting, you have been vigilant at this. i know your state of virginia,
8:02 am 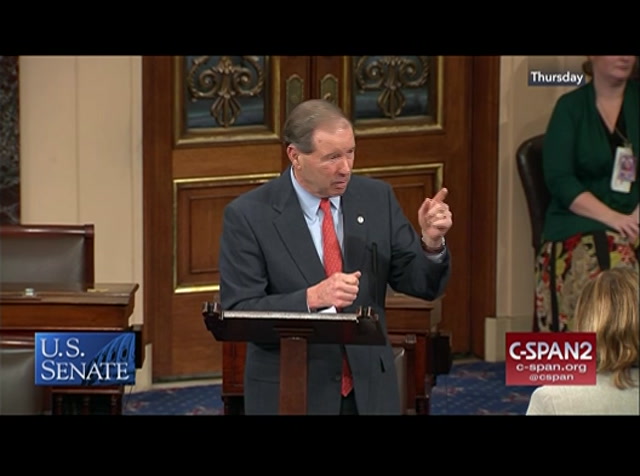 you and senator warner are very concerned. senator heinrich and myself very concerned about what's happening in new mexico. and i wanted to speak a little bit about the interior department bill were on the ranking democrat. mr. president, i rise today to call on this body to take action and immediately end the government shutdown that is causing tragic consequences in the lives of americans. we are on day 27 of the shutdown, the longest in our nation's history. every day my constituents in new mexico are asking me, what are we doing to end this senseless shutdown? so i'm here on the senate floor demanding that we opened the government. demanding that we do our jobs as a coequal branch of government. demanding that we pass bipartisan appropriations bills.
8:03 am 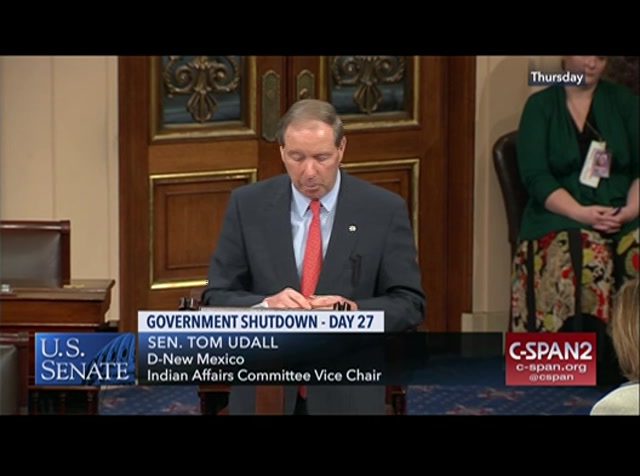 i have the privilege of serving as the ranking member of the into your appropriations subcommittee, and i know how critical that the into your bill is, particularly to my home state of new mexico and states across the west, and across the country. the interior bill funds basic services like health care and public safety for 2 million american indians andnd alaska natives. through the indian health service and the bureau of indian affairs. this bill keeps our air and water clean through the work of the environmental protection agency. this bill protects and preserves national parks and other treasured public land, it helps support small businesses that depend on them. the agencies in this bill fund science, wildlife protection, energy development, an arts and cultural programs in every state. and they employed tens of
8:04 am 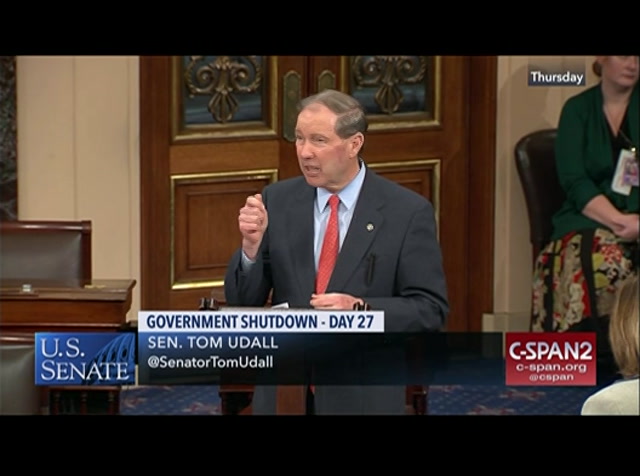 thousands of americans. there is no reason why they should be shuttered. they t are simply too important. this shutdown is particularly devastating for indian country. every day the president continues to treat travel programs like hostages for political gain, by his actually endangers families across indian country. multiple health clinics that serve urban indians have closed their doors, forced to turn hundreds of patients away. tribal court programs are in jeopardy. food distribution and social service programs are on the chopping block. law enforcement services are stretched to the breaking point. thousands of tribal members are furloughed, all to a devastating effect. indian country is paying the price fordi every day that the
8:05 am 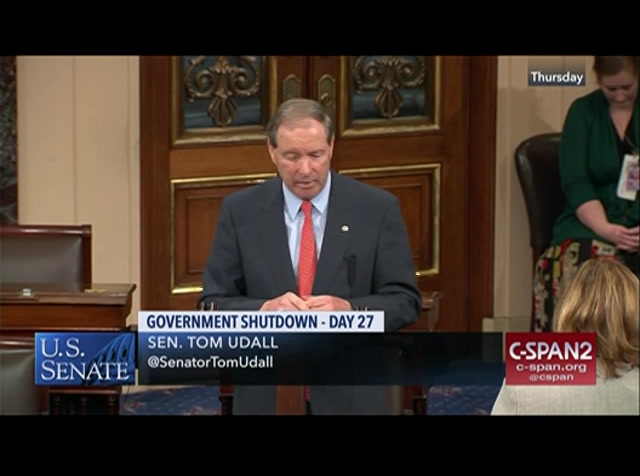 presidents reckless shutdown continues. these arere peoples lives and livelihoods on the line. our government is completely failing to uphold its trust and treaty obligations to native americans. all for what? and wildly expensive and ineffective wall that this nation doesn't want. and a vanity project for a president who is not putting the best interests of this country first. it doesn't make anype sense. we do to pass the interior appropriations bill so that we can reopen the entire national parks system, along with other public lands. and do so safely. already we've heard about the tragic impacts of the shutdown on our parks, including thousand-year-old joshua trees cut down in california, and fossils that included at
8:06 am 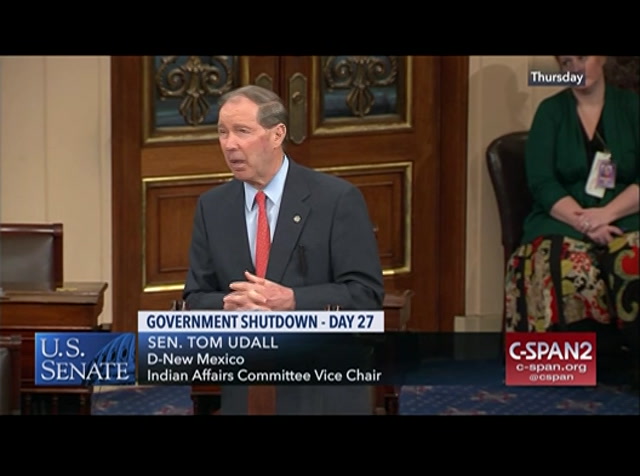 carlsbad caverns in my home state of new mexico. we can't let this kind of damage happen to our most treasured places. and we must ensure that small businesses that depend on our public lands from fishing guides to gas stations and hotels are able to thrive and keep our economy strong. across the board the shutdown is hurting businesses, contractors and h federal workers. even the president's own council of economic advisers has released figures doubling the expected impacts to the economy. think about that. the president's own aides admit that the shutdown is worse than they anticipated. this is totally unacceptable. but it's not too late to change the situation. we can end this shutdown today. all itnd takes is for enough ofy republican colleagues and
8:07 am 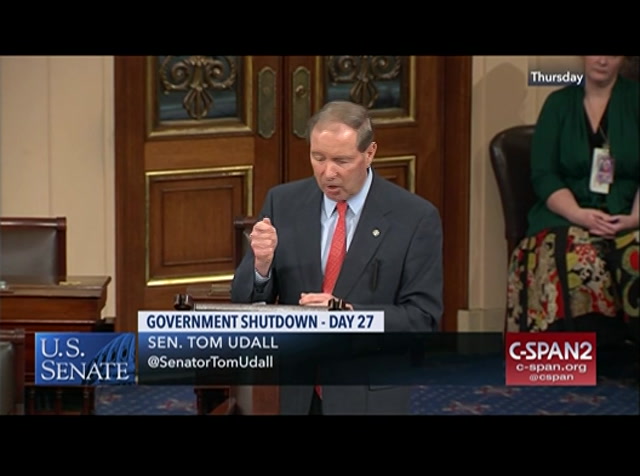 friends to find the courage to join as to pass these appropriations bills, and to send a message to the white house, we need to reopen the government. so mr. president, i i want to y to them, let's join together to make sure that tribalt health clinics are open and tribal law enforcement officers are on patrol. let's work side-by-side to reopen the entire nationalwo pas system and other public lands that ensure that there are enough, and ensure there are enough staff members on the ground to protect our nation's most cherished natural and cultural resources. let's pass these bipartisancu appropriations bills without delay. i don't understand how this chamber can stand by and watch the devastating effects of this shutdown on our nation. in newva mexico alone we estimae that there are at least 10,800
8:08 am 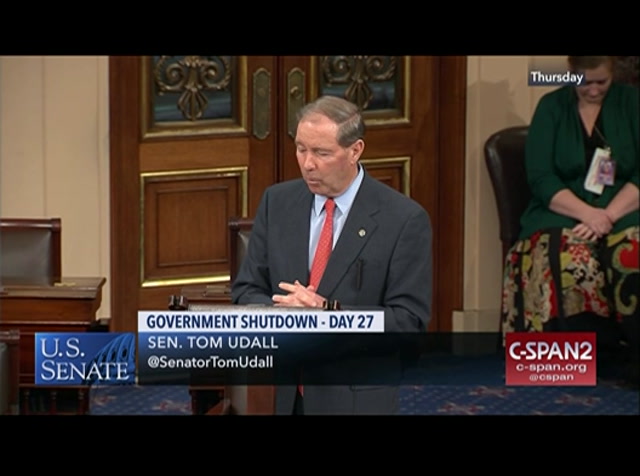 federal workers that are working without pay or are furloughed outright. and nationwide there are an estimated 800,000 workers and as many as 2 million federal contractors that may be affected. we are talking about millions of peoples hx being held hostage for a border wall that the american public doesn't support. yesterday, , i stood on this and talk about the impacts this shutdown is having on a family in carlsbad new mexico. they are dependent on a paycheck from the department of the interior to help keep the family afloat as they deal with the disabled son who had two brain surgeries. they were already dealing with one of the worst crises a family can go through, now they have to worry about how to pay for basic necessities. they are just one example of the lives at stake.
8:09 am 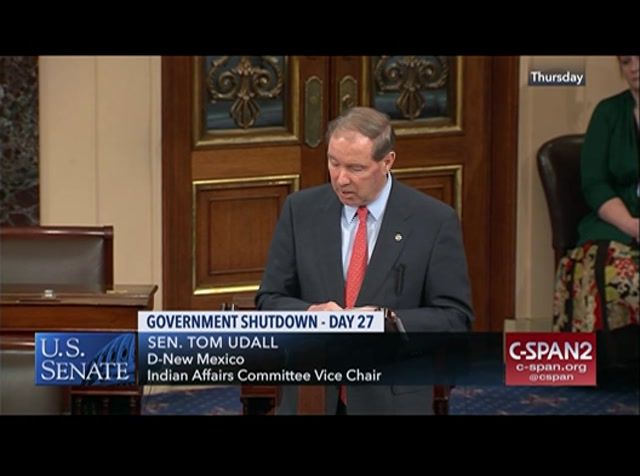 but it's not just federal workers and federal contractors. every single american relies on the federal government for essential public safety. and security. the fda shutdown. contaminated food can kill thousands. tsa agents and traffic controllers we rely on to keep air travel safe, they are unpaid. and the massive irony, president trump shutdown means that the department of homeland security is unpaid. there are an estimated 2000 new mexicans we rely on for border security,, international trade, and immigration work. they are unpaid. this really truly is madness. for their sake and for the sake ofir all americans who are affected by this tragic situation, we need to end this
8:10 am 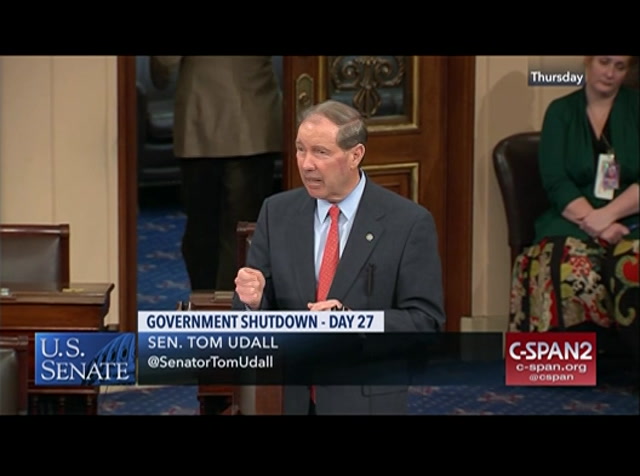 shutdown now. the consequences of inaction are too great. and once again let me just say senator kaine for his passion on this issue and for his vigilance in terms of bringing this issue and fighting with all of us here on the floor, and i would yield to senator kaine. >> senator from virginia. >> i will briefly conclude my comment recognizing that my colleague from indiana is also on the floor. i wantri to thank the senator fm new mexico for his words. he spoke about the motion i just made. i will be on the floor tomorrow and saturday, and next week,, tuesday, wednesday and thursday to share stories that of then shared with me and are being shared with me everyday by virginians affectede and the agencies the senator from new mexico discussed and others. but just to clarify, the motion i made earlier was to have the vote on the house bills that are pending before us.
8:11 am 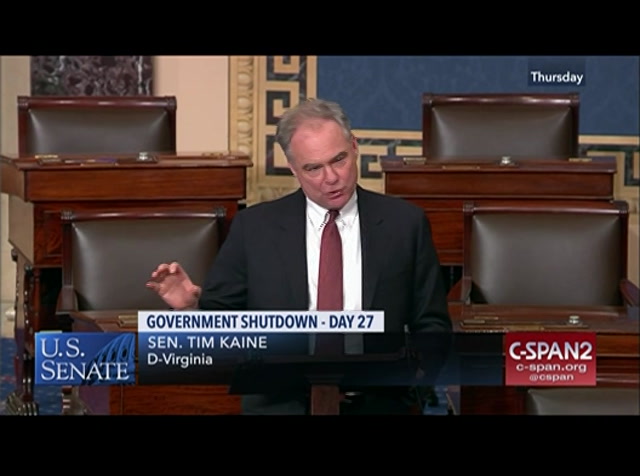 there are two house bills been before us. one is for short-term appropriations for the homeland security related agencies. the other is for the full-year fiscal year, the remainder of the fiscal year appropriation for the t following departments and agencies. department of interior, and vitamin protection agency, forest service, deep arbitration including the irs, the judiciary, , executive office of the president. we're trying to fund the executive office of the president. the district of columbia, deep robin of agriculture including the food stamp program, fda, deep robin of transportation, department of housing and urban development, department of commerce, department of justice including thef fbi, science related agencies including nasa, department of state and several related and independent agencies. that was the motion i made was objected to by the majority leader, three items quickly. there are three levels of just surreal illogic to the position that we are in. the first is we are having a
8:12 am 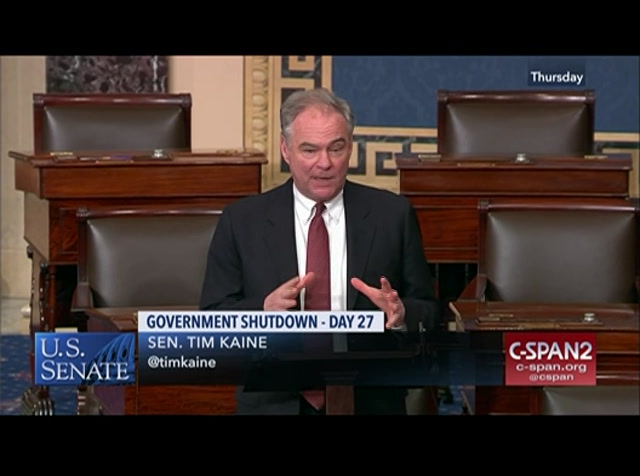 legitimate debate between congress and the president with border security and immigration reform. that's a very legitimate debate on which they are intellectually respectful differences of opinion. but if were having a debate about that, why would we punish the workers that are charged with administering the food stamp program? why would we punish workers international forest of the national parks? why would we punish the citizens that need those services? so the first level of illogic to the position we're in, we're punishing both the workers and citizens who need services completely unconnected with the border and immigration reform issue. surreal illogic number two, if we're having a debate about safety and security on the border, why would we demand customs and border patrol folks work without pay? those that are affected and that are part of the agencies dealing with the dispute are by all accounts the frontline people
8:13 am 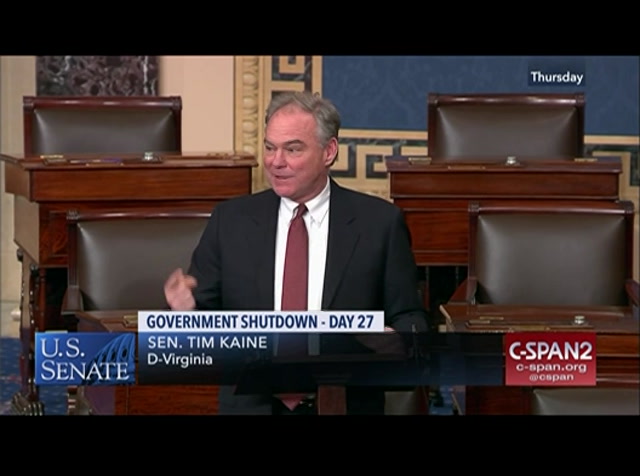 are dealing with this, immigration judges, customer border patrol folks, i.c.e. agent, dea agents, coast guard to the interdict drugs, fbi, u.s. marshals, batf agents. i would make their lives harder when they're the safety and security professionals who are charged with dealing with the issue that we're trying to figure out? and the final level of surreal logic as a you to my colleague from indiana is, i want to thank all my colleagues because a week ago we by unanimous consent past the back a bill that the president signed yesterday. so now we have guaranteed that the federal treasury will write a check for the paychecks for all of these workers. it's actually probably going to be more to close in restart cost more but we've not agree to pay back pay in this and any future shutdowns to these workers. so if were going to pay them anyway, if were going to pay them anyway, why wouldn't we want them to be serving
8:14 am 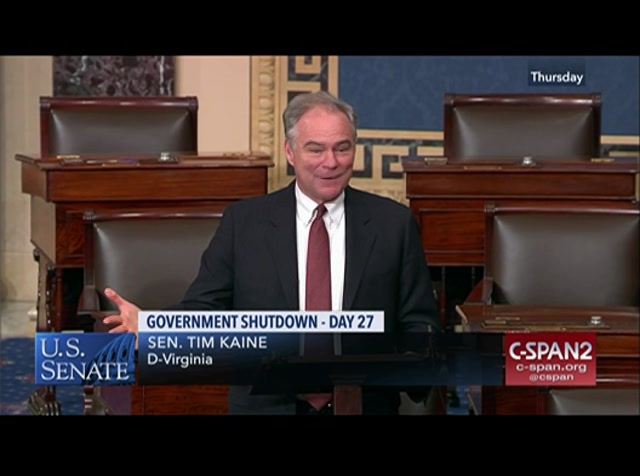 americans instead of furloughed? if were going to b pay them anyway, if the federal treasury is going to write that check, wouldn't it be better that they're in their offices and ring the phone processing food stamp applications, serving the fellow americans and locked out of their offices? we bar federal workers from striking because of the need for continuous government operations, but we are locking them out of their offices while we've agreed to give them full payment for the work that there would've been doing had we not lock them out. that is not fiscally smart. with that, mr. president, i yield the floor. >> mr. president? >> senator from alaska. >> tray to a couple days ago i came to the floor to talk about partial government shutdown, how it's affectinge different parts of my stay, the great state of alaska and in particular how it is impacting the men and women of use coast
left
right
Borrow Program
tv