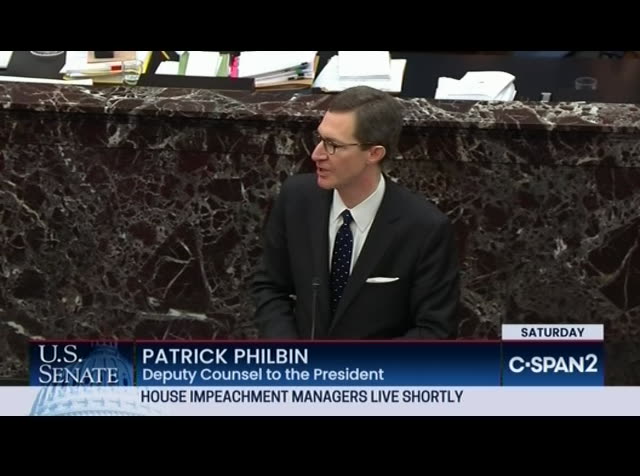 pointed out specifically to the house. that was the reason for not responding to them. because at a long federal precedent threat to be a vote from house to give authority, and the administration would not respond to subpoenas that wereto invalid. t w, the next what i would like to touch on briefly has to do with due process. because we've heard from the house managers that they offered the president due process at the house judiciary committee. >> we will leave this now go live to capital for remark some democrat house managers any pretrial briefing for the impeachment trial session set for 1 p.m. eastern today. >> good afternoon. just want to make a couple of comments about the bolton revelations, then answer one or
12:33 pm 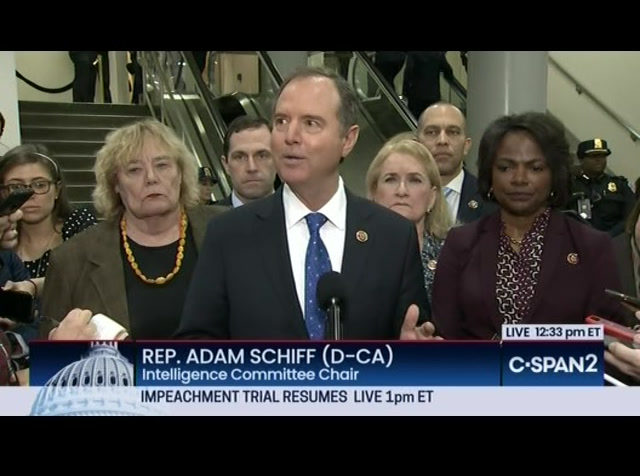 two question. we are running a little late so will have to keep to that. the news of the last 24 hours that john bolton not only is prepared to testify, but that based on his manuscript that testimony would include a direct conversation with the president of united states where the president made it clear he was conditioning military aid on political investigations or material that he wanted from ukraine, makes it all the more clear why you can't have a trial a meaningful try without witnesses and you can't have one without john bolton. i am, you know, please that the senators are reconsidering, some that had i think questions about the utility witness testimony. they appear to be reconsidering at a think that's a very positive. because this witness obviously has such relevant information to
12:34 pm 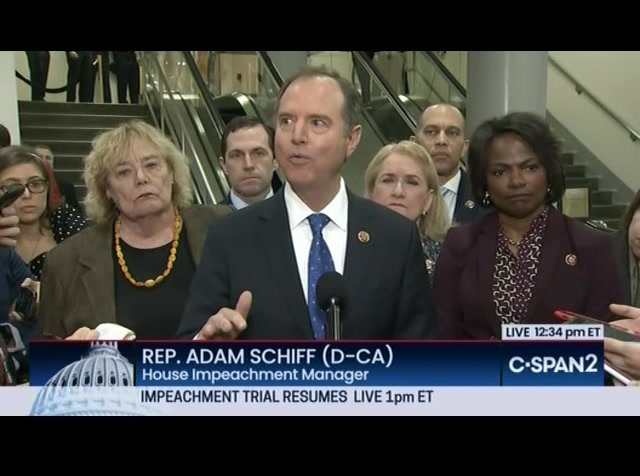 shed on the most egregious of all of the charges in the articles of impeachment, and that is the president of united states withheld hundreds of millions of dollars of military aid from an ally at war to help secure that nations help to cheat in the next election. now, let me make one of the point though very clear. we already have testimony on this key pernicious charge against the president, and that testimony has been consistent and uniform and uncontested. when the presidency council says as they did on the senate floor that there is no direct evidence the present ever told somebody was conditioning the aid of these investigations, that is just not correct. he told mick mulvaney and he admitted it publicly saying that he had discussed the dnc server with the present and that was part of the reason they held up the money.
12:35 pm 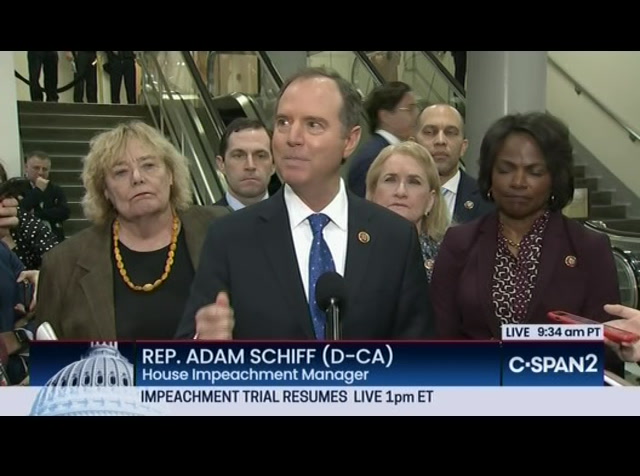 so the president on chief of staff has already admitted to discussing this with the president. what's more, ambassador sondland spoke to the president on september 7 and while the president denied a quid pro quo, he then went on to explain the sondland's the was, in fact, the quid pro quo over the egg. that is zelenski had to go to the mic to answer these, announce these investigations. and, of course, all of the other circumstantial evidence, the fact there was no legitimate reason for holding the egg, the fact of the nationals get a staff, all the advises and other secretaries were urging that it be released. the uncontradicted evidence is the simplest 2+2 equals four. nevertheless, the president's of lawyers thought to contest this charge. and now that they have, they cannot dispute the relevance and the importance of john bos
12:36 pm 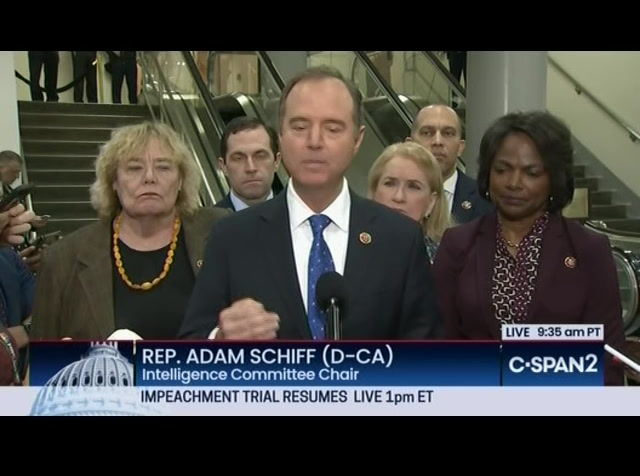 testimony. so he has to come in and testify under oath. senators should not wait until march 17 when the book comes at. they should demand this information while it would still be pertinent to their decision. >> republicans argue it is so relevant, john's posttest was sort of thing you should've pushed harder for on how site. knowing what you know now and what you see as reporting, do you regret not doing it. >> is no, because bear in mind we did use that approach with other witnesses like don mcgahn. it is now more than nine months since we subpoenaed don mcgahn and we are nowhere near a court decision. so when people say why didn't you go to court to insist and fight and go through the district court and court of appeals and the supreme court, we would still have that question unresolved a year from now. so it's really argument to say that the president should be able to unilaterally decide whether and when he can be impeached. give that he was attempting and has been attempting and continues to attempt to cheat in
12:37 pm 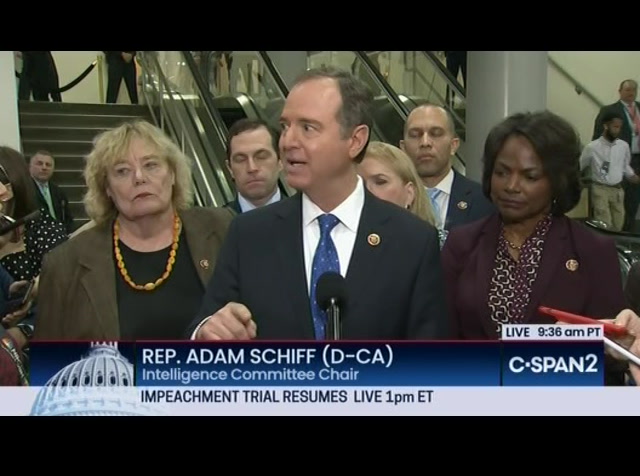 the next election we did nothing we could wait. it isn't a question for john bolton why he was unwilling to testify when we invited him to testify in the house. i don't know but i think you should answer that question. but he is whatever reason he was unwilling to come to the house. is willing to come before the senate. the senators should not turn away from this very relevant evidence. >> have you or your staff had any conversation with bone or -- >> i i want to give others a chance. i'm sorry? [inaudible] >> it's not a question of whether i trust john bolton or the republican senators or the democratic senators. he should be placed under oath, and this is why we think the testimony should be public. it should be live. let the american people along
12:38 pm 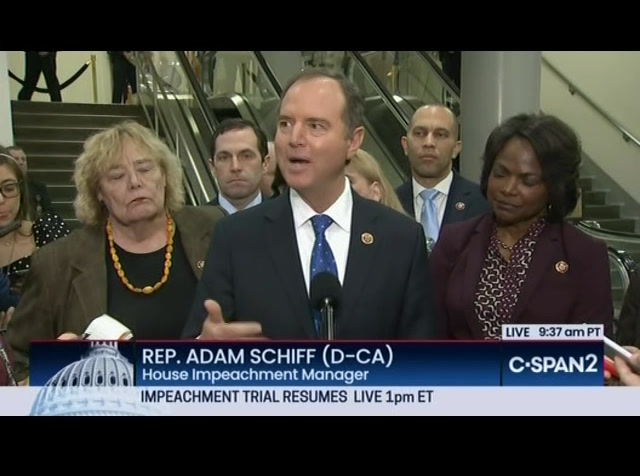 with the senators a by what john bos credibility when he testifies and make their own judgment. but you say we're going to blind ourselves from the witnesses so clearly relevant testimony to one of the central most serious allegations against the president, idol see how you could have a fair trial with wit testimony like that. thank you. >> one more question. >> thank you, guys. [inaudible conversations] >> c-span, your unfiltered view of government. created by cable in 1979 and brought to you today by your television provider. >>oo
left
right
Borrow Program
tv