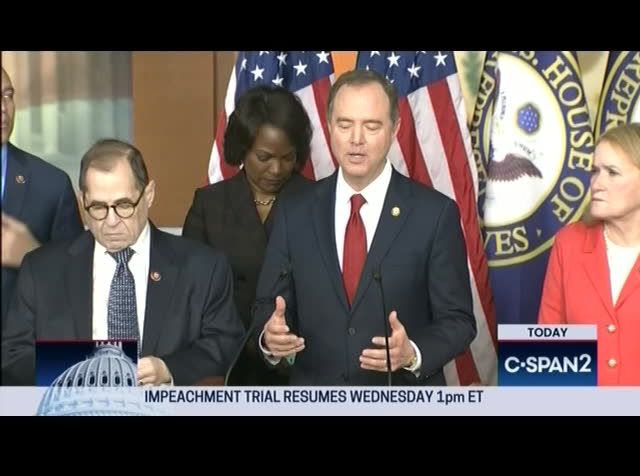 are still reeling from the revelation of john bolton and what he has to say the very relevant probative quality of the testimony as i'm sure you have seen the president's own former chief of staff general kelly says he believes john bolton and more j importantly that is extraordinary of itself the chief of staff believes john bolton in that implication does not believe the president of the united d states that he worked closely with for such a long time but he also recognizes the importance of calling john bolton as a witness to swear him in and that senators hear from him themselvesst that very relevant testimony. the president's lawyers today and in prior presentations cannot defend the president on
1:20 am 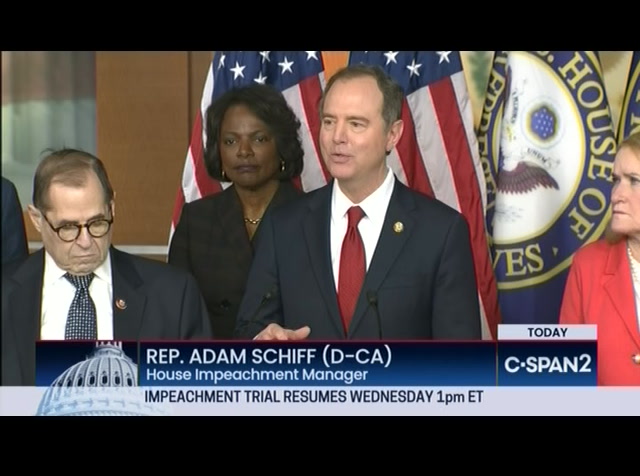 fax instead they went through a list of grievances which i'm sure the president was delighted to hear but not relevant to the charges against the president here today to use their time to smear the bidens with the whole ukraine scheme to attack the managers but as far as the facts themselves although at their disposal any agency officials who worked with the president this whole period of time did they choose to rely on any of them to support the president's position and the answer is a not a single one because they can't and now the one that has offered to come forward they are determined to try to prevent it we cannot
1:21 am 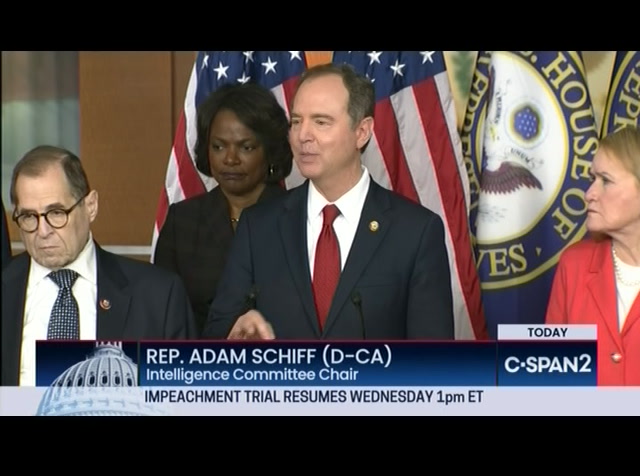 has made as effective case for john bolton as the president's own lawyers. the way they did that today was the bulk of t5 argument that is all this is this is a policy difference and as t5 would have us believe donald trump released the military aid because he was so grateful the ukrainian parliament passed the anticorruption court bill he was just waiting for that the whole time. no one believes that. no one in that chamber or anyone in the country that buys that explanation. may be one of the gop senators remarked publicly today we pretty much know the facts.
1:22 am 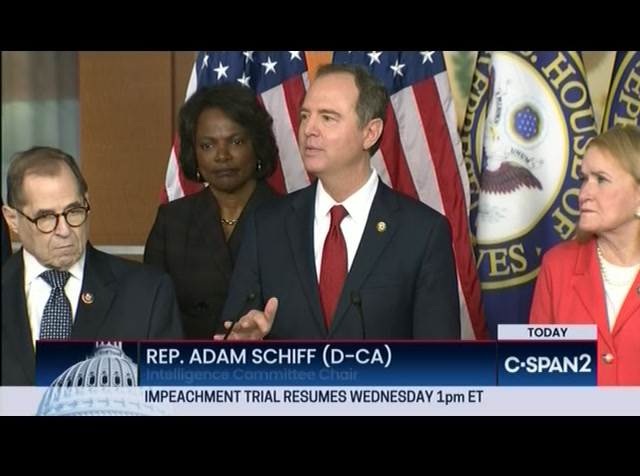 and we do. we know with hundred of millions of dollars was withheld to force an ally in the next election it is indefensible what do they have to fall back on cracks the argumenten that he did it and we all know he did it but we will find a criminal defense lawyer whose expertise is not constitutional law and admits he is out of the consensus to make the argument that effectively the constitution says so what. you cannot impeach president is too nebulous a concept as if article one that he has been impeached for the mere label of abuse abuse of power or did give him withholding military aid and to help him
1:23 am 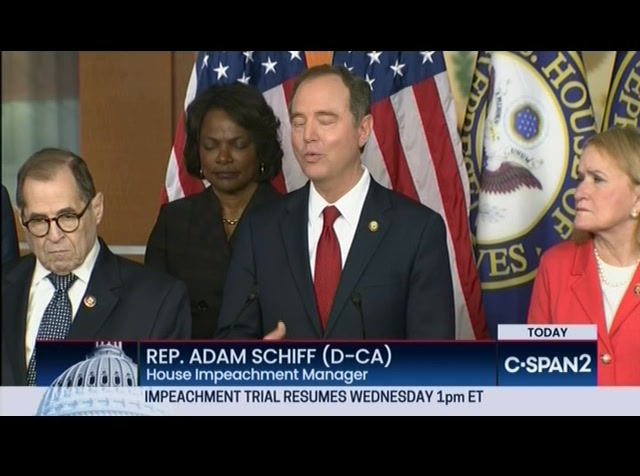 cheat but that's exactly what the article charge charges. that is evidently what they cannot contest so they are two questions the first is foundational. up until this point the argument a fair trial involves witnesses and documents so the question now bill before the senators they will have questions for us in the next two days but will there be a fair trial that americans overwhelmingly want we want the trial to be fair which is witnesses this is what the senate will have to decide we know what the witnesses will say because they said it already during the course of our proceedings we showed mick
1:24 am 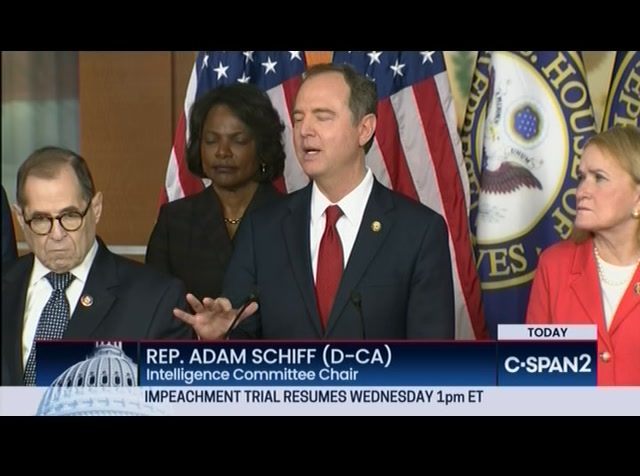 mulvaney admitting the aid was tied to the investigations and he described a quid pro quo to get the military aid the president of ukraine had to go to the microphone and in and - - announce these investigations and want to do so. with a conduct that egregious are we prepared to say we simply have to acceptep that in this present and future presidents have to accept the idea the president can so blatantly sacrifice the national security of his country in order to get help cheating in the next election. i think the founders would be astonished anyone would try to make that argument. let me make one other point with respect to mr. bolton you have heard this refrain also. the house should've taken a
1:25 am 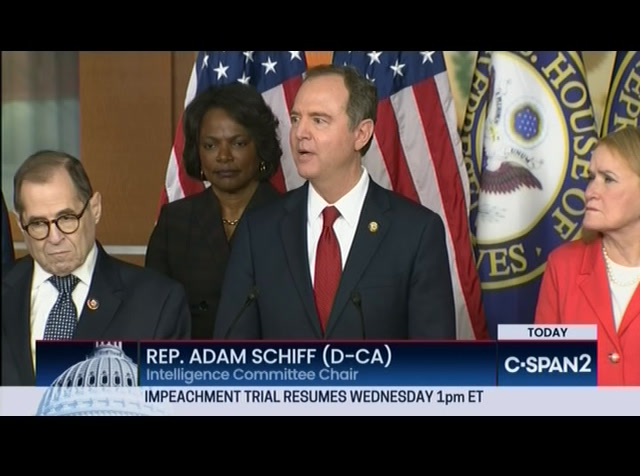 year or two to force john bolton to testify they should have forced him to testify. but i want you to hear what donald trump's lawyers at the justice department said not in the senate that before the court of appeals on this subject but the committee on judiciary versus don mcghan. >> the committee lacks article three standing to enforce the testimonyo demandic on matters related to his duties. here they are thee presidents lawyers are this duplicitous to come into the senate that they refer too as a court to say the house should have sued to force a subpoena and they go to court and say the house may not sue in court to compel a witness to testify.
1:26 am 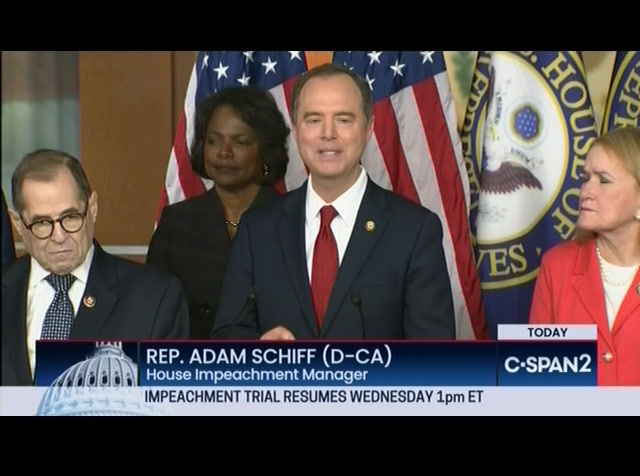 that is the legal duplicity of the president's team and it's in black and white. so are we going to get a fair trial or not cracks will the senatete here from someone everybody knows is a key and important witness on the most egregious conduct or are we not? i don't see how the oath of impartiality can be interpreted in any other way that a fair trial and documents are required for a fair trial. >> are you confident enough that the senate is in preparation for that? or are you yourself prepared? >> first we have prepared for john bolton we have a lot more to do now that we know more of
1:27 am 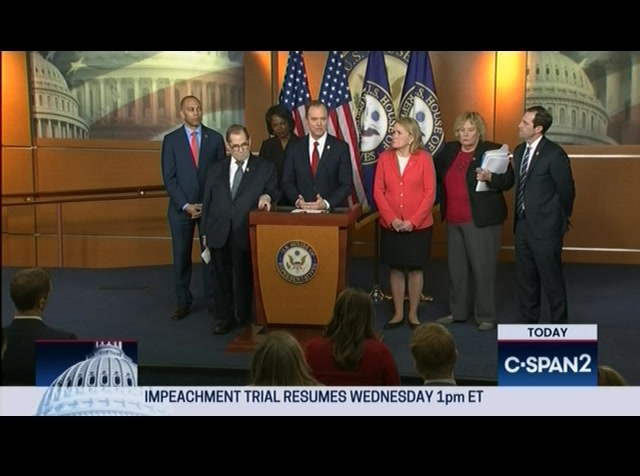 what he is likely to say that he will be prepared when the time comes. and what it is crucial is that the senators of iowa his credibility are we really going to require intel the book comes out that could have used the right conviction or acquittal. in terms of the red herring of the house managers want to call relevant witnesses we want to make them pay a price for witnesses who are at the heart of the scheme that's not a game are interested in playing. i can tell you my testimony.
1:28 am 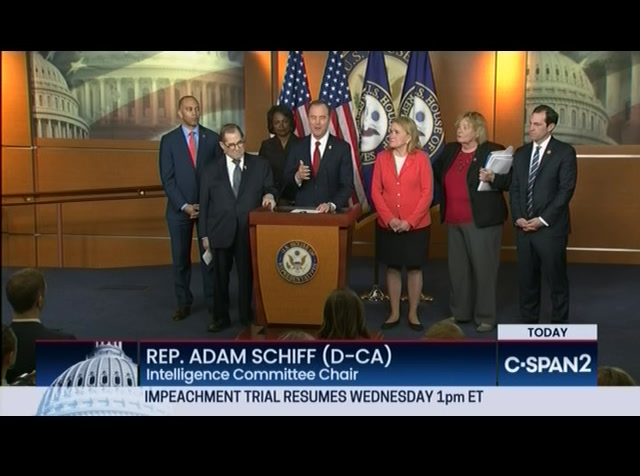 beis guilty and should impeached. i think the idea is this is what you have to fall back on when you just know how damaging john bolton's testimony will be and i would say the same of hunter biden they want to witness for witness then let them call mick mulvaney he said he disputes with john bolton has to say. call secretary pompeo. let them call people that are witnesses to the scandal and corrupt scheme. but that's not really what they want. they want a distraction i don't think the senators want to allow their proceeding to be turned into a circus. >> they are now counting senator paul that john bolton is not a credible witness.
1:29 am 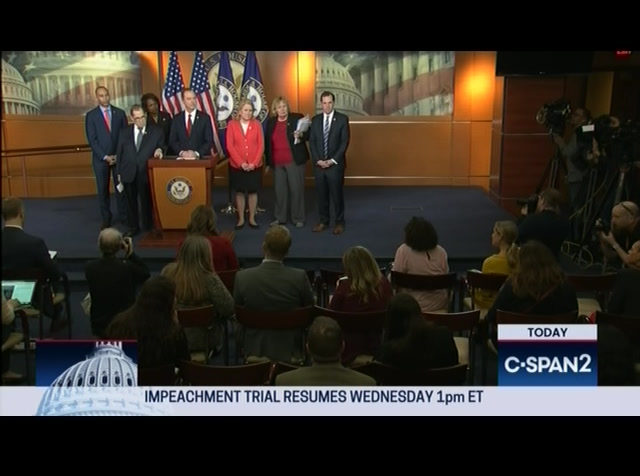 what would you say that the credibility are you concerned how the american public will paint him as a person? >> the chairman has said that this trial and the republicans tactic is a great distraction to distort a ndc van distract brick i would be more concerned based on the heardce we have all about the president's credibility. and if there are others are republican senators out there who has questions about john bolton's credibility where he said he would testify and testify under oath.
1:30 am 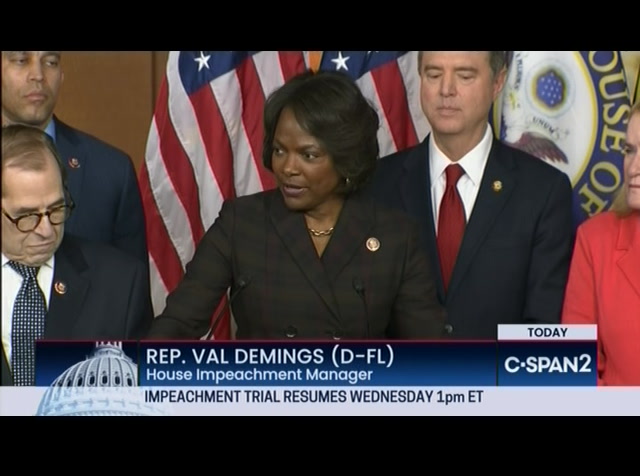 so let's subpoena him so we could hear what he says. and the american people can make up their own minds based on credibility based on the overwhelming testimony we have before i would be much more concerned about the president's credibility. >> number one fundamental of any trial you listen to the witnesses and make judgment if the witness is credible to tell the truth you don't not hear from the witness because maybe he won't tell the truth if he's relevant you hear from him that's what courts do whevery day. second, there's no reason to assume the chief of staff said he believes bolton's account
1:31 am 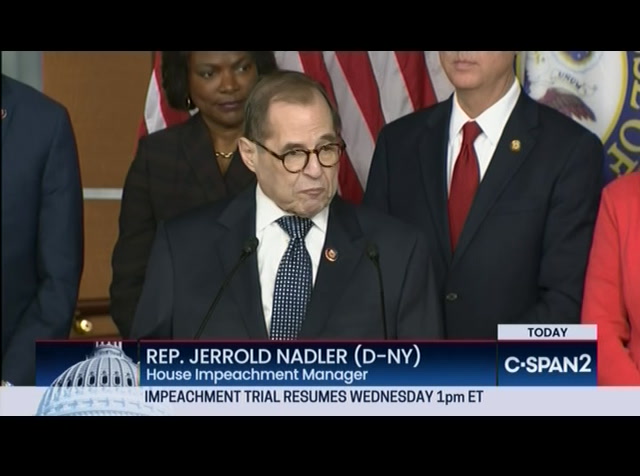 with a better station of belief from the president's chief of staff. and what you are seeing anyone will testify against the president and say he is lying we have to keep away from testifying but if we can't he must be lying. >> [inaudible] >> in terms of subpoena john bolton we could have but we subpoenaed the deputy first and they sued us it was very clear he was going to tie us up in court for months or years and that was crystalal clear.
1:32 am 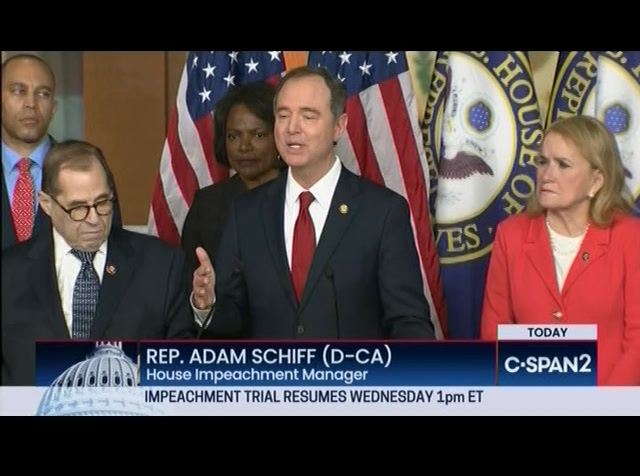 maybe with respect to other witnesses we have subpoena who refuse to come we would not play this game with amnesty in the courts and allow the president to essentially obstruct congress with impunity which is what he attempted to do to say heim would fight all subpoenas. the fact in the case we did bring against mcghan they are arguing you don't have a standing to enforce the subpoena shows just how s disingenuous they are so in terms of impartiality we allow thehe minority to suggest witnesses and they did in those hearings that were proposed by the minority in the supersecret depositions they were complaining about there were as many as the entire body of the u.s. senate they had every opportunity to
1:33 am 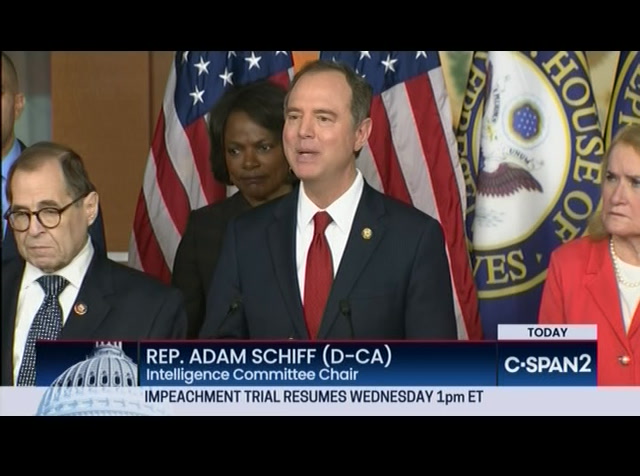 ask those questions the same as the members of my party. they can say it was partial or didn't have the same due process they can make the argument as they have repetitively we didn't get the same due process as other impeachments but the reality is they did. that process doesn't amount to very much. one last question. >> [inaudible] >> i will not discuss what backup or fall back position there is but at the end of the day nothing is sufficient if the senate doesn't decide to have a fair trial and you
1:34 am 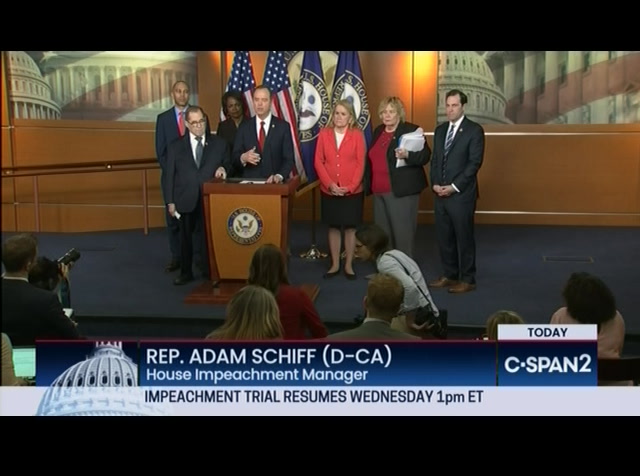 cannot have a fair trial without witnesses. thee resolution that senator mcconnell pushed through the senate says the witnesses have to be deposed before they testify. the fig leaf of that justification is that they depose witnesses in the clinton case it was the salacious quality of the testimony that led them to want to have those witnesses deposed swallows unseemly questions did not have to be asked before the senate. that's not the issue here. why of the senators have the opportunity to hear from john bolton with a not want to do it and even if they do want it to be dead in a deposition form? after all of those complaints it's very ironic they make such a strong case for depositions. we are not in that investigative stage anymore. we are in trial the judges of
1:35 am 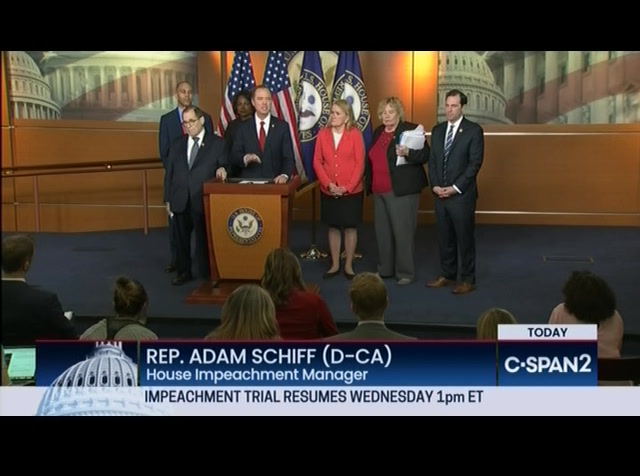 the law should evaluate john bolton's credibility for themselves they don't have to take our word for it he's not exactly on the same policy page as the democrats they have to to take john kelly's word for over the presidents word, they can make their own judgment that they can't do that if they refused to hear what he has to say. thank you. >> we will complete the question. over the next two days prick i remind senators their
1:36 am 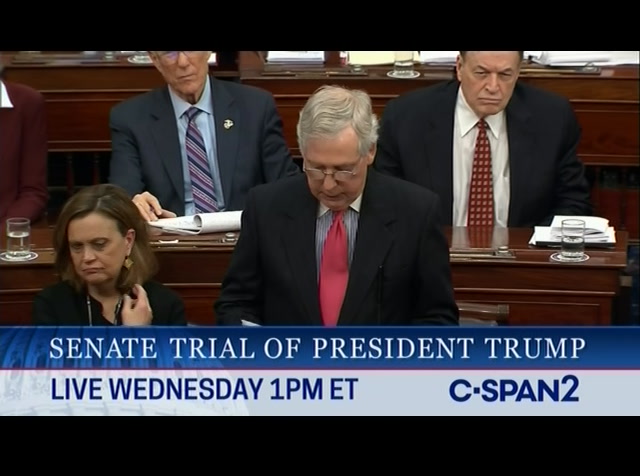 questions must be in writing and submitted to the chief justice and during the clinton trial senators were thoughtful and brief in the managers and counsel were succinct in their answers. i hope we can follow both of these examples during this time.
left
right
Borrow Program
tv