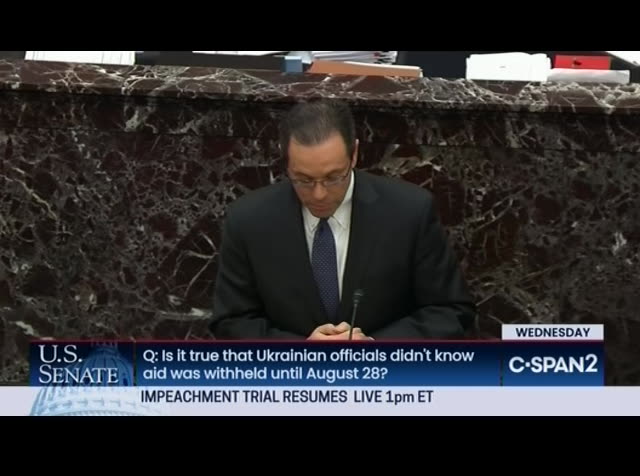 mentioned in the statement the house members have mentioned. i was really surprised and shocked because just a couple of days prior to that i actually have a meeting with john bolton. actually at several meetings with him and with extensive discussions. the last thing i expected to read was an about military aid being frozen, danyliuk said. after the others trying to get the truth was it true or not true? danyliuk said -- >> our live coverage will continue shortly. we are leaving this to hear from house impeachment managers. >> were the most and credible arguments born of desperation. arguments that senators ever followed woodlief is counted in the the most destructive path yesterday, the president's defenders argued that a president of the united states could essentially whatever he wanted to secure his reelection, no matter how corrupt if he believes his reelection was in the national interest.
12:16 pm 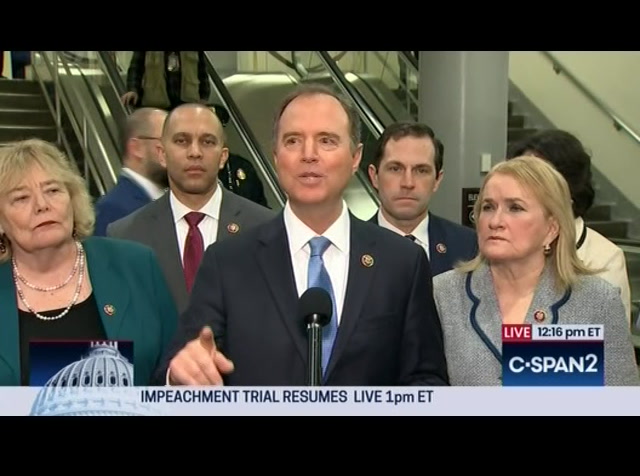 as the president's lawyers argued if the president does a quid pro quo, even one where he withholds military aid from an ally at war, even if it takes actions that jeopardize our national security and integrity of our elections, as long as he thinks it's in his reelection interests, that's okay and there's nothing that congress can do about it. and what's more, if part of that quid pro quo involved an investigation of his political rival, the fact that his political rival is running for president gives a greater legitimacy, not less guess it was the more consequential. that is the most absurdly dangerous argument that could have been made. and the fact that they must resort to this level of desperation is the result of the fact that the house managers proved the defendant scheme involved withholding military aid come withholding of a
12:17 pm 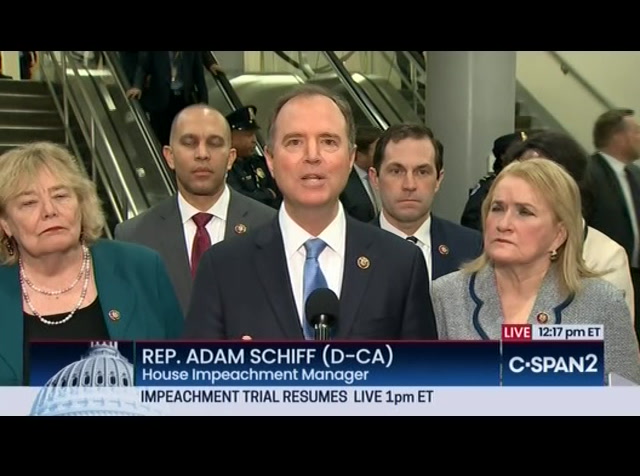 coveted white house meeting with a president of ukraine in order to coerce, , to extort, to blackmail that country into conducting or announcing the sham investigation, to helping him cheat in the election. they went on to say that soliciting, inviting, coordinating for not within with the fbi director says or any self-respecting american says, that they do that as perfectly fine. it is the normalization of lawlessness but that is what it had to resort to as the evidence has continued to pile up of the president's of guilt. and when the evidence written to give even greater with the testimony of john bolton, they've gone to extraordinary lengths to put a muzzle on john bolton to avoid calling him as a witness, to avoid letting the american people hear what he has to say, to try disciple his book, to attacking him -- stifled his book, to attacking
12:18 pm 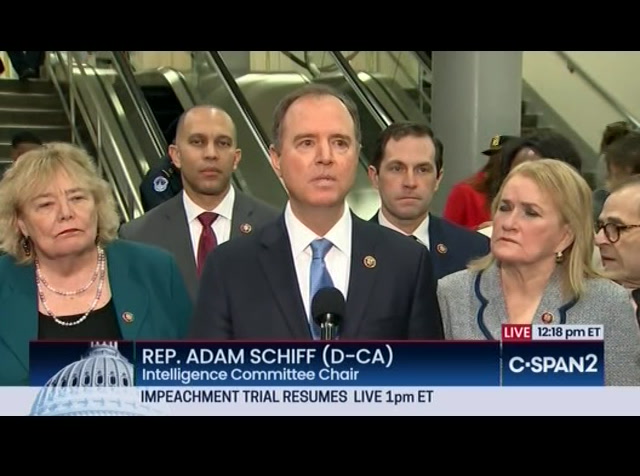 them publicly because they fear what he has to say because they already know the president's scheme has been exposed. so that's where they are. we will continue today to make the case, a case that is already been made to the american people but needs to be made to the senate, and that is a fair trial regardless of witnesses, fair trial, and a partial oath requires witnesses and that's what they should deliver for the american people. no trial, no vindication. no vindication for the president or anyone else. the constitution requires a a r trial, and that's all we are asking. respond to questions. [inaudible question] >> well as i said yesterday, we protect whistleblowers.
12:19 pm 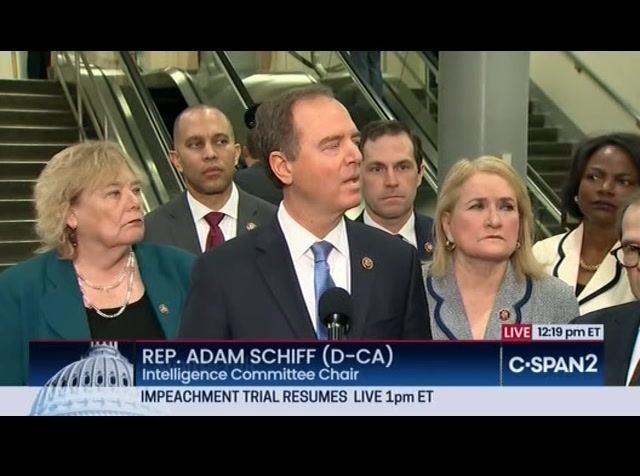 we need their cooperation. we need their support in making the country work. i'm not talking specifically about this whistleblower. a document whistleblowers generally. we rely on people of good conscience to report misconduct. the only point in outing this whistleblower is to satisfy the desire of the president for retribution, that is that something that the senate should condone. >> some republicans are putting to the steele dossier. is that legitimate to say the dnc were involved in the steele dossier? >> honestly, going down this field, , dossier rabideau, i dot even understand what the logical connection is supposed to be. the president is on trial right now for withholding military aid from ally at war. trying to coerce ally in helping him cheat in the next election
12:20 pm 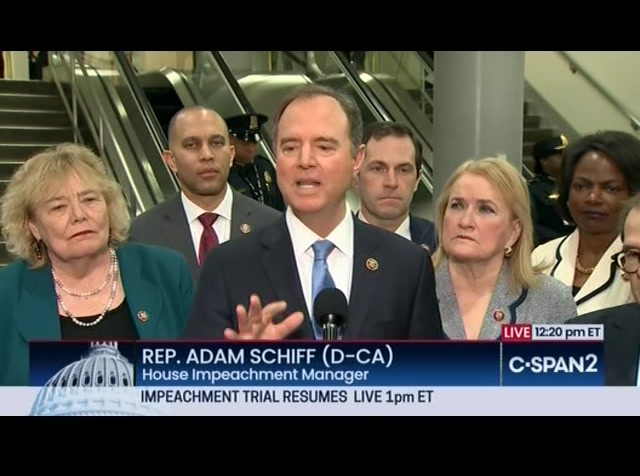 and to continue and that may gratify the president. again, part of what the president's lawyers is doing is meant to persuade the senators and not the american people. it isn't. it's meant to gratify the agreement as of the present a tk about christopher steele or james comey or peter strzok or n lisa page. none of those people are responsible for the president's misconduct. only donald trump is responsible for his misconduct, and he must be held to account. thank you. >> will you still pursue john bolton if tomorrow's vote fails?
12:21 pm 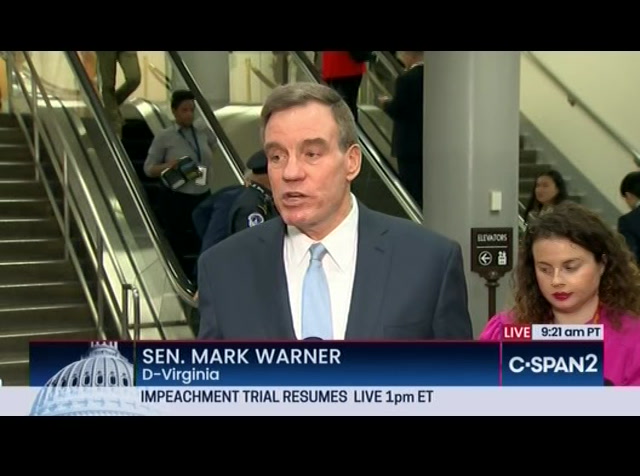 >> hi, guys. most of you not being here at 11:00 last night. >> i was here. >> a few of us were here. >> you all kind of blend together. >> are you talking to chairman burr? he said he didn't -- >> let me just make my opening comments. two things happened yesterday that, even in the realm of current politics, were pretty stunning. we had the president's lawyer say a president of long as they feel like they are acting in their own interest on reelection can virtually do anything. then we had the president's of the attorneys say, as long as it doesn't meet the criteria of a political contribution from bill
12:22 pm 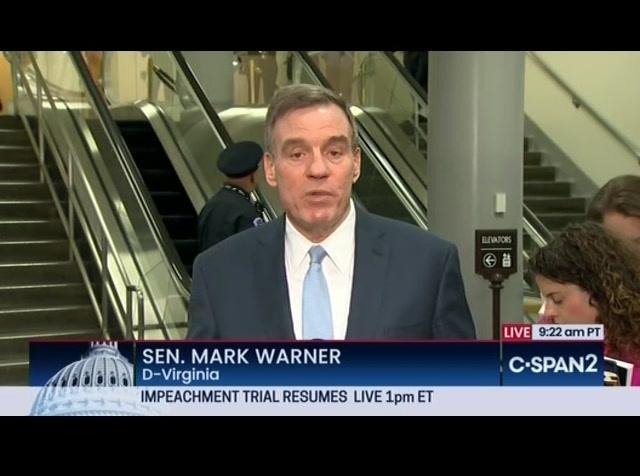 barr's justice department, foreign interference is fine. i think those are both wrong i think they dramatically weaken american expectation that we will have a free and fair election. i think it contradicts the work of the director director of nal intelligence, the cia, the nsa and the fbi. i think undermined their work. because what they are trying to prevent is whether it be deep fakes, whether it be russian hot manipulation, social media postings, whether it be weaponizing hacked information into the political dialogue. they are out there day in and day out, they all said it's the top priority and in a sense the president's lawyers are saying all this is fine in the donald trump view of america and the donald trump view of the importance of protecting our election security.
12:23 pm 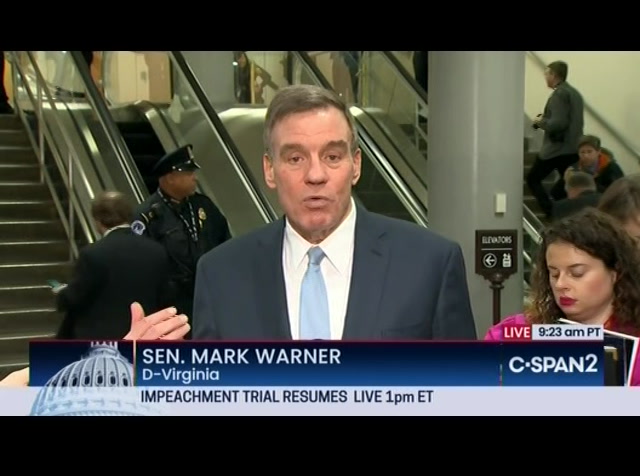 my hope is that my republican colleagues, those of us on both sides of the aisle who have been relentless on trying to make sure that we stood up the appropriate protection for our election security will speak out. i'll leave it for them to make their own decisions on that, but i thought those two arguments fairly calm most of the time but they really set me off because it really dramatically reverses what we, the intelligence community and the law enforcement community, have been working on for three years. >> some of the republican colleagues were defending -- [inaudible] it wasn't a crime. what do you make of that argument? >> if it's not a crime to interfere in our elections, if it's okay for russia to manipulate videos with deep fakes, if it's okay to see a
12:24 pm 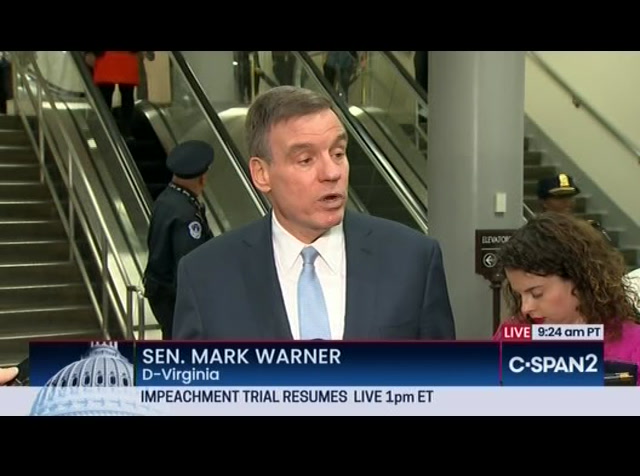 repeat of the kind of social media-based attack on our election, in 2020, and when we see our adversaries, russia, china, north korea and iran, getting better, god help us. >> senator, what do you think -- [inaudible] >> i don't know what's going to happen. i don't know if -- i hope we will still get the votes to get the witnesses. i've not heard any argument about why this process wouldn't improve if you're from john bolton. even if it's not going to convince you on impeachment, should the american public have all of the facts? shouldn't we as policymakers have all of the facts so that if we choose to act after-the-fact, regardless of what happens on impeachment, if we choose to make more clear that for interference is inappropriate, that in a sense acting a foreign
12:25 pm 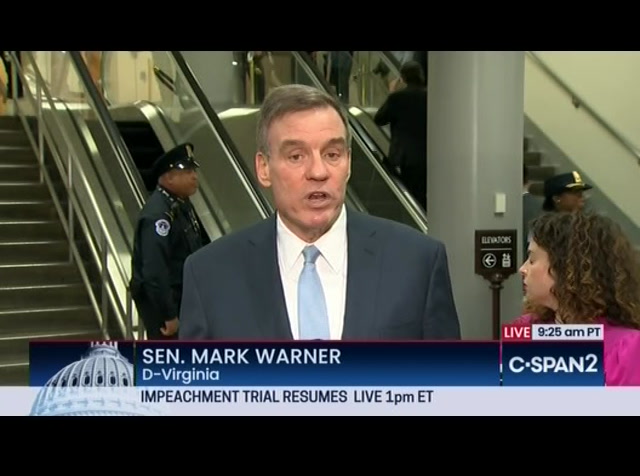 leader -- asking for leader is inappropriate or should we have all of the sex is going to try to make policy on it ongoing basis? even if people not to move forward on impeachment, and have made my decision until we finish this process, i would think, particularly based upon the president's lawyers arguments yesterday that anyone that wants to protect our election integrity or anyone who wants to basically not invite more foreign interference or not basically say all bets are off when it comes to campaigns, if your present you can do anything. we like to come in and correct that and we would do a better job cracking that if we have all the facts. >> many of republican colleagues -- quickly to a final vote on the verdict. no closing arguments, no deliberations. what is your reaction to that? >> what we heard at the beginning of this was let's
12:26 pm 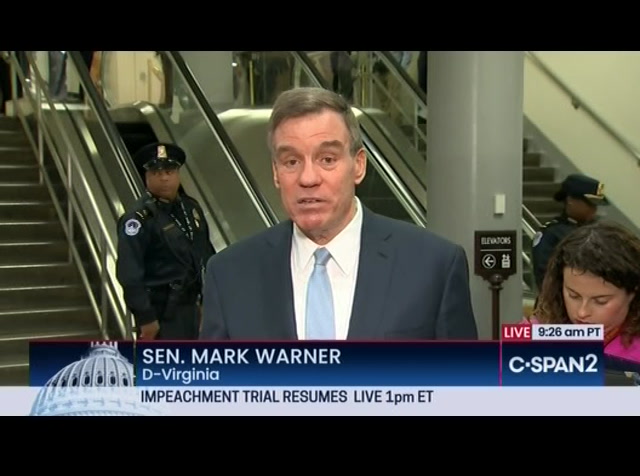 follow the clinton, let's follow the clinton process. the clinton process went through with this were brought forward after the argument in question took place. if we get rid of that, so much of the clinton process. after that senators had a chance to talk to each other and deliberate. if we get rid of that as well, i think in rush to judgment without any debate amongst senators, i think it will say to the american public this whole thing was a sham. >> have you talked republicans about voting for witnesses? >> i have been talking to my republican told on a regular basis. people have said this before. former republican senators have said this before. if this was a secret vote, we would absolutely have a full set of witnesses. >> any thoughts on your
12:27 pm

colleagues about possibly sintering the president? >> there's lots of ideas floating around. let's take this one step at a time. i still think there is a need and i desire from the vast majority of americans whether they support the president or don't support the president that we ought to hear from folks who were in the room. and if the president, he's going to attack now john bolton 40 years of being an extraordinarily conservative expert in foreign policy, somebody like mostly disagreed with for most of his 40 year career, he wants to throw them under the bus now, let the president ring forward mick mulvaney, his chief of staff. he was in the room as well. this fear of having more facts i think a lot of the public can draw their own conclusions from that. thank you. >> thank you, senator.
12:28 pm 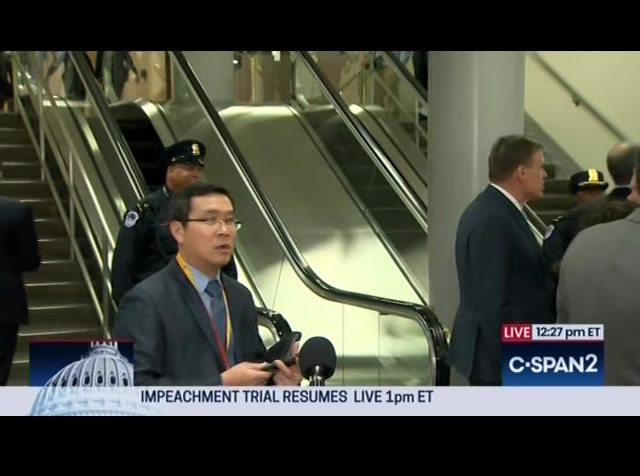 >> so i think that what we are seeing is disclosures dropping like dominoes. these disclosures are going to continue. i think they are really still open questions about national security review by the white house on the bolton book, and what additional disclosures we will see. but let me say about this proposed disclosure of the whistleblowers a name. i think that kind of irresponsible and reprehensible action should be sanctioned by the senate if any of our members disclose the name of a whistleblower. i think their strong bipartisan support for preserving confidentiality of whistleblowers, old senator grassley and myself and others on both sides of the aisle have really made a careers work of
12:29 pm 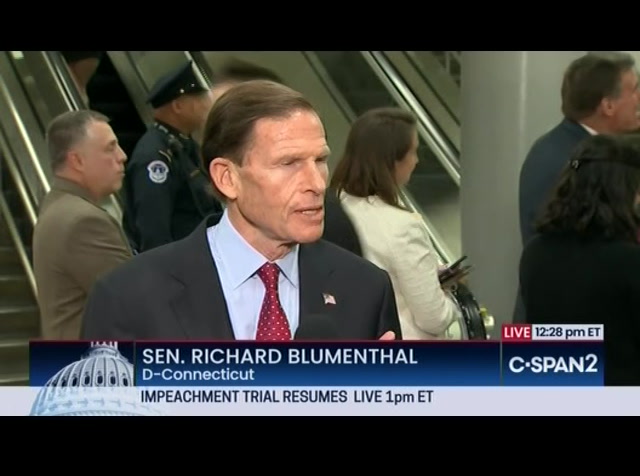 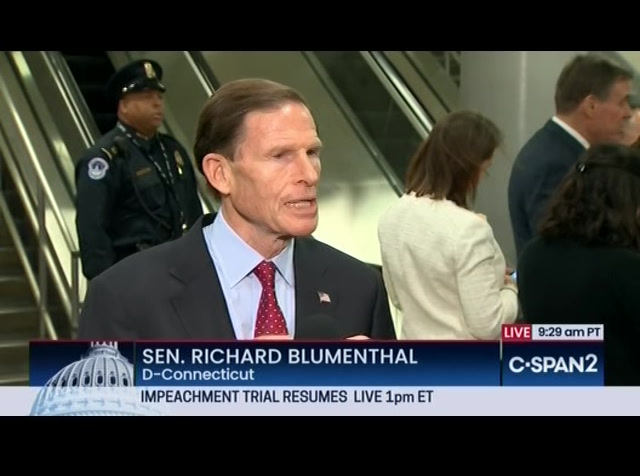 is on my republican colleagues shoulders. they have to step up and stand up to this president. so make no mistake, the chief justice is that going to provide them with some escape hatch here. they have the responsibility. [inaudible question] >> i think there are potential ethics rules, penalty in the senate for this kind of irresponsible and reprehensible disclosure of whistleblower information. even if it's not their name, disclosure of this information is abhorrent to the ethic and traditions an institution of the senate. i think should be subject to some kind of sanction. >> thanks, senator blumenthal.
12:31 pm 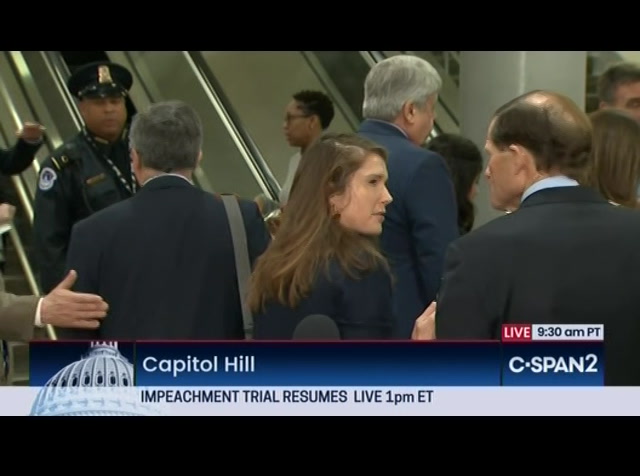