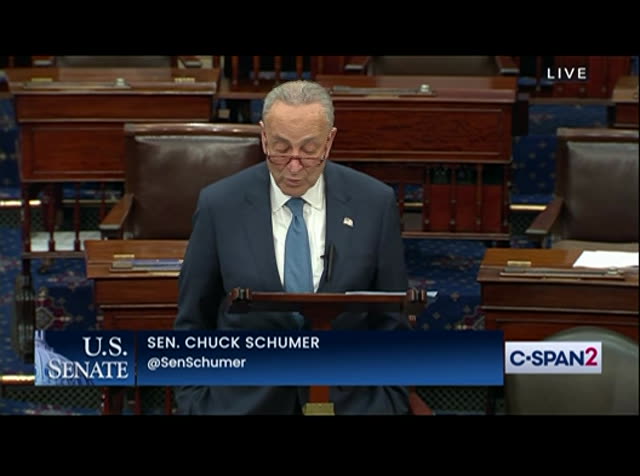 and confirmation be at 1:45 p.m. if any of the confirmations are confirmed, the motions to reconsider be considered made and laid upon the table and the president be immediately notified of the senate's action. the presiding officer: without objection. mr. schumer: if there's no further business to come before the senate, i ask it be adjourned under the previous order. the presiding officer: the senate is adjourned until senate is adjourned until the senate hasn't gaveled out for the day during session confirmed a handful of executive branch nominees for labor and treasury department post. en bloc debate on the john lewis voting rights advancement act 50 -- 49 paid 60 votes were dated. alaska senator was the only republican to vote yes with all democrats. majority leader chuck schumer spoke on the senate floor following the failed vote. >> now madam president and reference to what just
8:10 pm 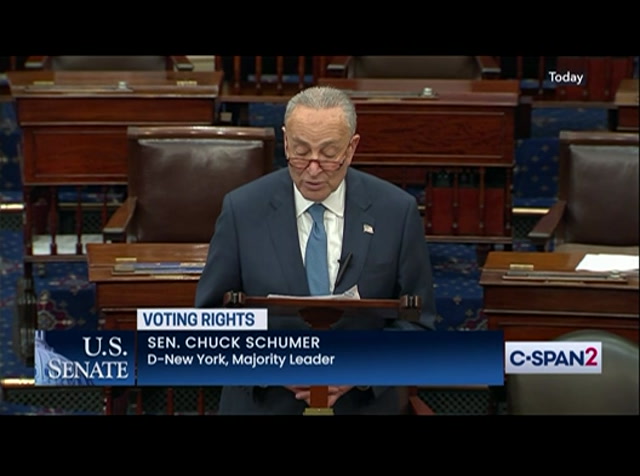 occurred on the floor in terms of voting rights, madam president this is a low, low point in the history of this body. a few moments ago senate republicans, for the fourth time this year were presented with a simple question, will they vote in favor of starting debate, nearly a debate on protecting voting rights in this country? in today's case they would join democrats and proceeding to the john lewis voting rights advancement act. which would reinstate long-standing, widely embraced federal protections on the right to vote. with just one exception, republicans once again obstructed the senate from beginning its process. given the chance to debate and what is supposed to be the world's greatest deliberative body, republicans walked away. today's obstruction was only the latest in a series of disturbing turns for the
8:11 pm 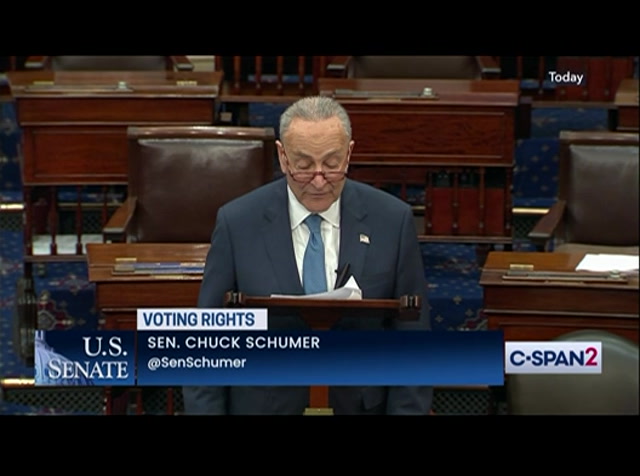 republican party. for over half a century the policies of the voting rights act commanded bipartisan support in this chamber it's beend authorized five times including vice president nixon, reagan and bush. many of my republican colleagues in office today have worked in the past to improve clearance provision similar to the ones contained in today's proposal. ite was good enough the republicans back then, it should have been good enough for them today. but after today's vote, madam president, it is clear the modern republican party has turned its back on protecting voting rights. the party of lincoln is becoming the party of the big lie. democrats have laid out the facts for months. we are witnessing, at the state level the greatest assault on voting rights in the era ofat segregation.
8:12 pm 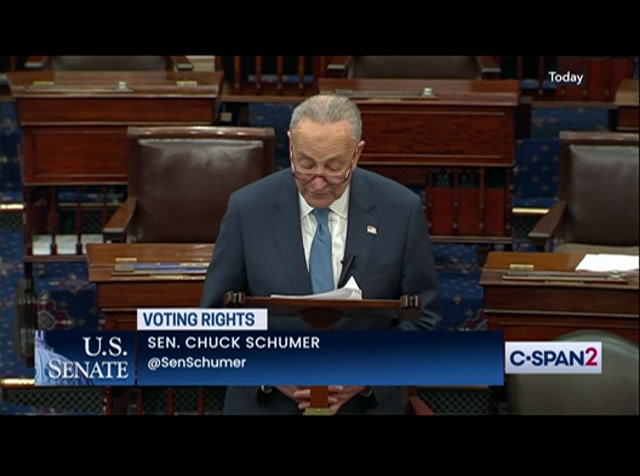 before our very eyes the heirs of jim crow are weakening the foundations of our democracy. and by blocking debate today, senate republicans are implicitly endorsing these partisan republican actions to suppress the vote and unravel our democracy. we have said all year long, that if there is anything worth the senate's attention, it is protecting our democracy. we have tried for months to get republicans to agree. we have lobbied republicans h privately. if gone through regular order, we have attempted to debate them on the floor. we have presented reasonablect commonsense proposals in june, july, august, october now november.ep each time, i personally promise my republican colleagues they would to voice their concerns, offered an amendment and make changes to our proposals. at no point did we ever asked
8:13 pm 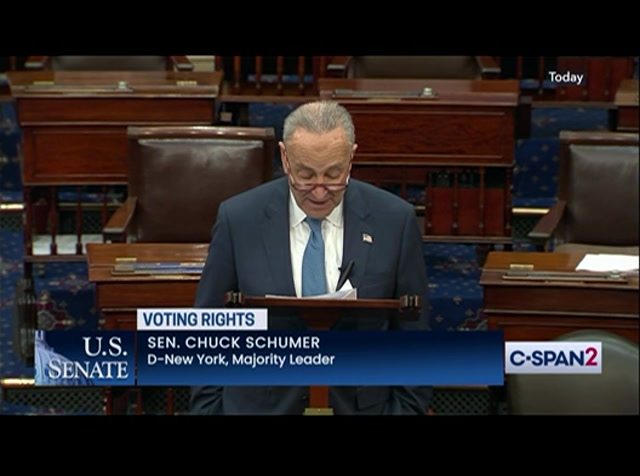 them to vote for our legislation. we have simply been trying to get a republican friends to start debating, just as the senate was intended to do. on the floor, off the floor, we held public hearings, group discussions with senators and one-on-one meetings with the other side to try and win some support. senator's manchin, king, king, durbin, klobuchar, leahy and more have all met with republicans to initiate a dialogue. and at every turn, we have been met with resistance. the, sole exception and ten months has been our colic the senator from alaska who voted in favor of advancing today's legislation. today i think her for working with us in good faith on this bill. but where is the rest of the party of lincoln? down to the last member of the
8:14 pm 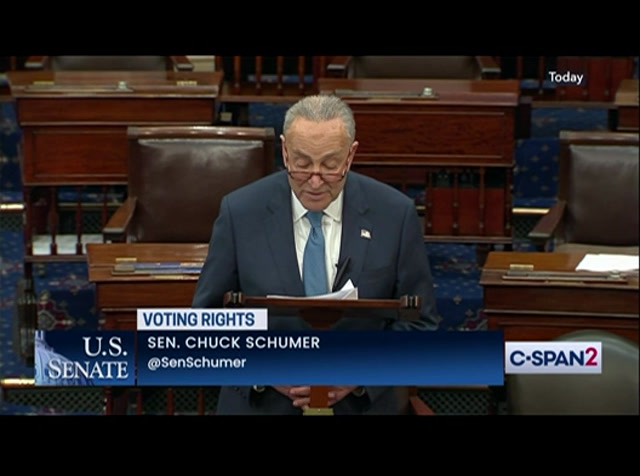 rest of the republican conference has refused to engage, refused to debate even refused to acknowledge that our country faces a serious threat to democracy. madam president, the senate is better than this. a simple look at our history shows we are better than this. the same institution that passed civil rights legislation, the new deal, the greatest society the bills of m reconstruction should be more than capable of defending voting rights in the modern era. but anyone who has been here for more than a few years knows, the gears of the senate over the years the filibuster is used far more today than ever before. by some measures, ten times as much compared to decades past. some might wonder if any of the great accomplishments of the past would have the chance of passage today.
8:15 pm 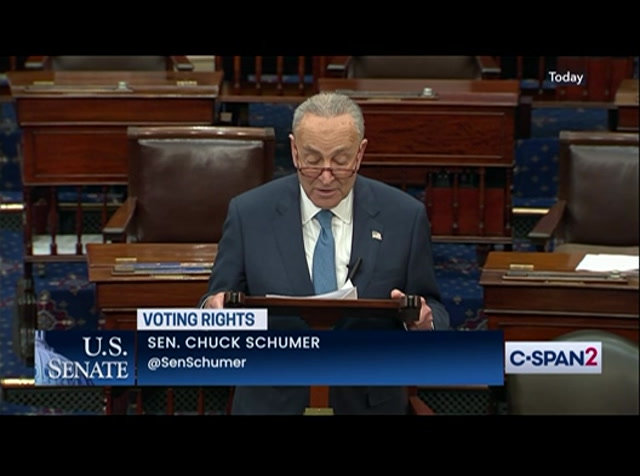 with the social security act passed the modern senate or what about medicare and medicaid act? what about the civil rights act of 1964? we sure hope they would but it's difficult to see without the way the chamber works today. as i said a few weeks ago, i believe the sentence needs to be restored to its rightful status as the world's greatest deliberative body. it has earned that title precisely because debate is the central feature of this body. but at the end of the day, so is governing. so is taking action when needed once the debate has run its due course. this is an old old fight in this chamber the great senator of massachusetts said to vote without debating is perilous but to debate and never vote is imbecile, imbecile. to vote without debating is
8:16 pm 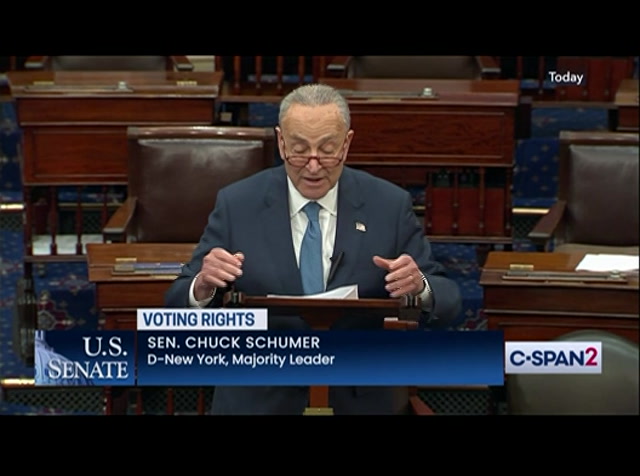 perilous but to debate and never vote is imbecile. we should heed those words today and explore whatever path we have toe restore the senate so it does what its framers antenna, debate, deliberate, compromise ander vote. democracy will always win out in the end if we are not willing to put in the work to defend it. ite require constant vigilance to keep democracy alive in the t century. madam president, just because republicans will not join us, does not mean democrats. fighting. this is too important. we will continue to fight for voting rights and find an alternative path forward. even if it means going at it alone to defend the most fundamental liberty we have as citizens. i yield the floor.
8:17 pm 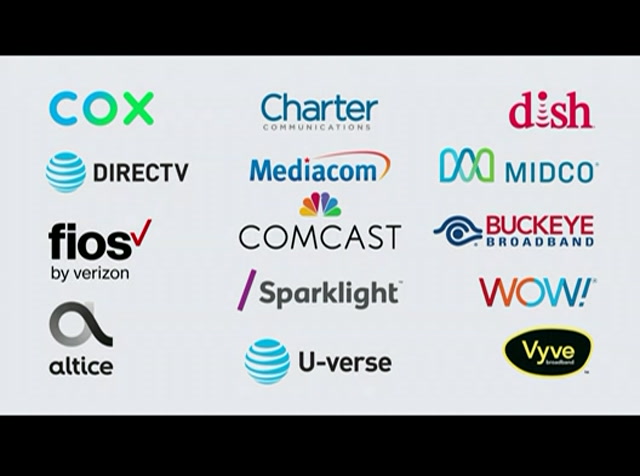 ♪ ♪ sees ben as your unfiltered view of government we are funded by these television companies and more including comcast. >> you think this is just a community center? no it is way more than that. comcast is parting with 1000 community centers to create wi-fi enabled to students from low-income families can get the tools they need to be ready for anything. comcast support c-span as a public service along with these other television providers giving you a front row seat to democracy. weekends on cspan2 are an intellectual feast every saturday you will find events and people who explore our nation's pass on american history tv on sunday book tv brings you the latest in nonfiction books and authors it is television for serious readers. learn, discover, explore. weekend on cspan2. ♪
8:18 pm 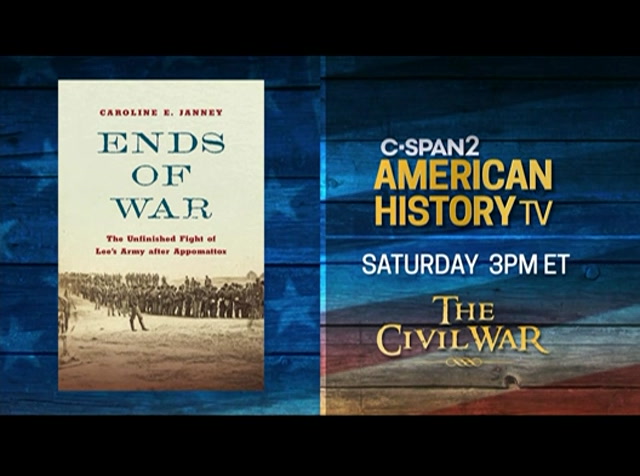 ♪ american history tv saturdays on cspan2 exploring the people and events that tell the american story at 10:00 a.m. eastern on oral history veterans from world war ii through the iraq war show their experiences of war. then on the civil war to programs on robert e lee at 3:00 p.m. easter caroline director of the university of virginia center for civil war history discusses her book and the war the unfinished fight of lee's army after appomattox which examines military and political uncertainty in the weeks following the end of the civil war. at 4:10 p.m. eastern "new york times" columnist alan with his book robert e lee, the confederate general's life is detailed from refined upbringing and virginia's high society and long career in the u.s. army through his experiences during and after the civil war.
8:19 pm 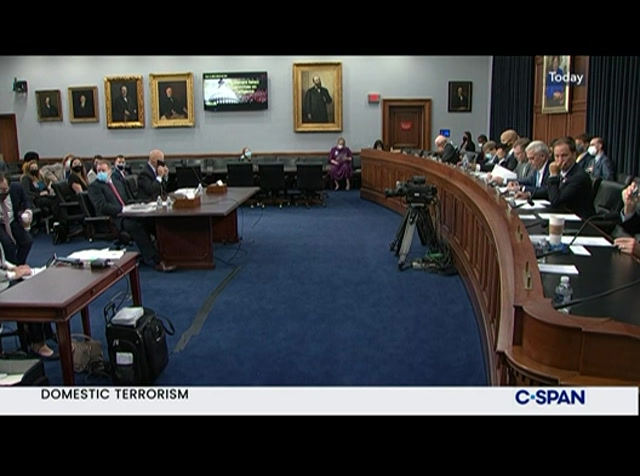 exploring the american story watch american history tv, saturday on cspan2. >> next a hearing on domestic terrorism with homeland security and fbi officials. witnesses addressed several topics including the rise of white supremacy, civil rights and the role of social media. they outline the agency's efforts to combat these issues before the house intelligence committee. this is about an hour and a half.
left
right
Borrow Program
tv