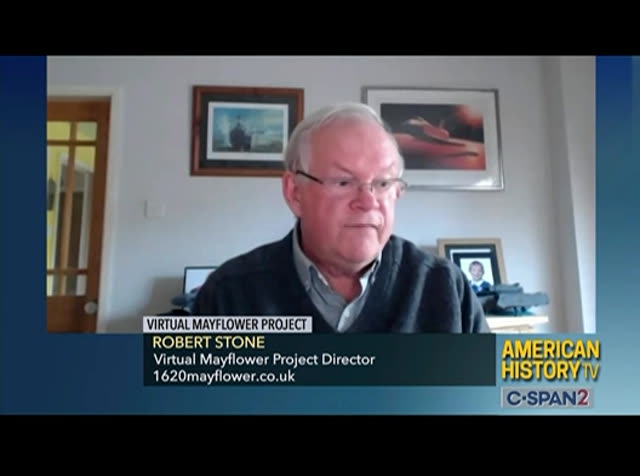 william brewster and william bradford and a lot of other guys who were very, very passionate, very staunch practices, or practitioners i should say of the puritan faith. they were led back into england by james the first who then gave them his blessing to get them out of the country. he said they could go to the new world, they could go to the americas, fighting i think he said providing they treat themselves respectively. they were in and out of england and then down to the ships. fortunately, not being chased or executed by the king but gently encouraged to go somewhere else. >> professor robert stone, thank you very much. >> great. thank you.
8:35 am 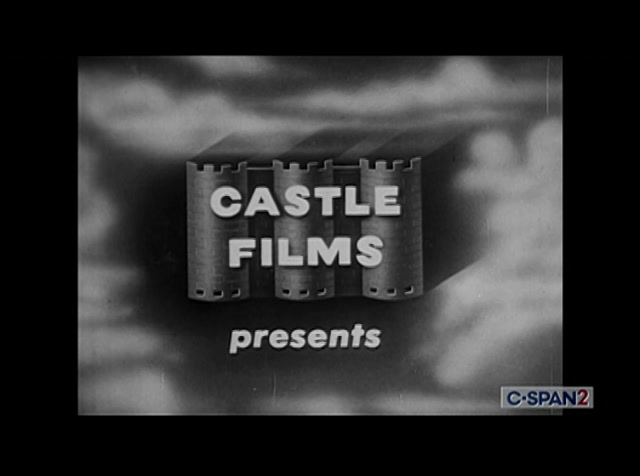 ♪ ♪ ♪ >> in plymouth harbor, england, than mayflower ii lies in a coup, i think the ship comes to life again after three centuries in the pages of history. she is as accurate a replicate of the original as scholars and shipwrights could make her, a gift of englishmen to america, and historical figure far removed from the solemn ceremonies. this commute to history takes the form of living adventure. 337 years after the original set sail for the new world, on the landing stage from which the pilgrims departed, they did the ships company got speed and smooth sailing.
8:36 am 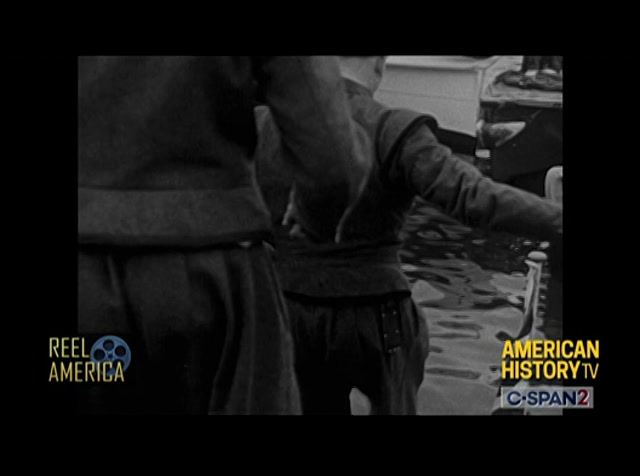 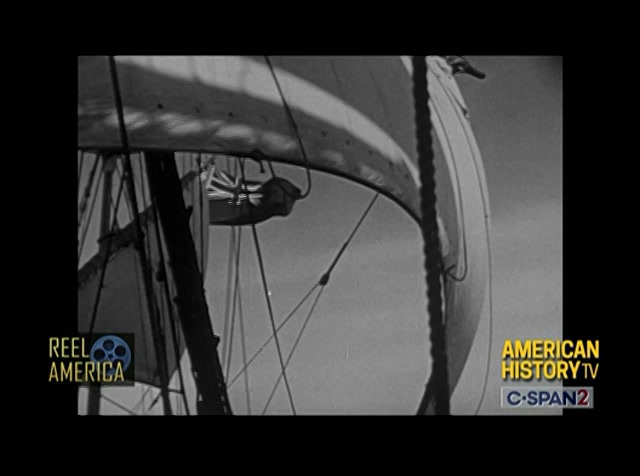 she's only 90 feet long, 255 feet at her widest but mayflower the second carries on the ships company of 33. our namesake namesake sailed with 125 passengers and crew. the modern see flares have added advantages. a perfect the city of navigation, radio, a quick and press most important knowledge of the winds and currents. the pilgrims headed for virginia but wound up at cape cod. the captain sets his course almost due south to gain the help of the tradewinds. in many ways the ships company lived and worked 17th century style, even on a small ship that means lots of work. the diet was largely lime juice and salt beef, all-time nautical staples. they are solid but not
8:38 am 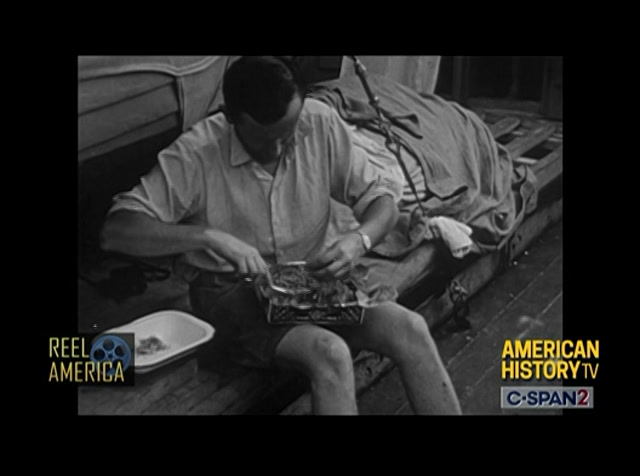 monotonous menu was brightened by the watercress garden grown in the box by the ships doctor fresh greens every day. salt beef and greens all the way without an epidemic of seasickness, , that's some kindf record right there. for 16 16 days the mayflowers southwest from england with the steady wind and smooth seas, , i sense of adventure and only saltwater to shape in. what better time to grow a beard. going it is easy. trimming get on the deck of the heart rolling ship looks downright hazardous. in the tradewinds the vessel turns the corner heading west a meeting its first rough weather and the ship is rolling sharply.
8:39 am 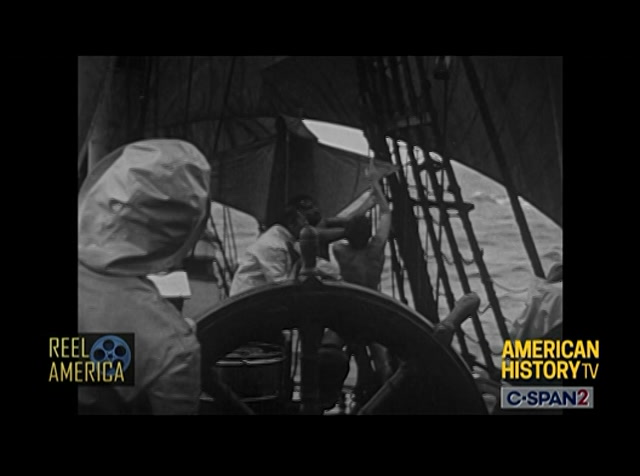 but the wind is there and each days of voyage is longer and longer. once the mayflower logged 164 miles. life on a smooth running ship ordinarily settled into a comfortable routine but this is no ordinary voyage. it's the highlight of a lifetime for every man of the crew and it is especially memorable for the 17-year-old cabin boy. his transition from landlubber to mariner is made official by the captain. one of the few americans aboard, he earned his birth by winning a national youth award. his english counterpart offers congratulations on his commencement. sunday's saw all hands assembled on the quarter deck for religious services conducted by the captain.
8:40 am 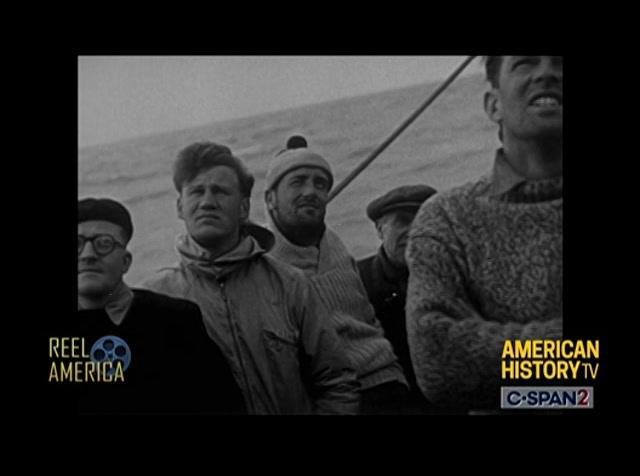 worship was followed by short talks on pilgrim history or on early exploration. today was one of rest with no deck swapping, no chores for the crew. twice the tradewinds failed. the ship was calm. the cramped quarters below deck grew unbearably hot. felix was only one indifferent to the heat and still air. the other centrally in mid ocean swimming. many hundreds of miles from the nearest shore. at last, the winds came and they
8:41 am 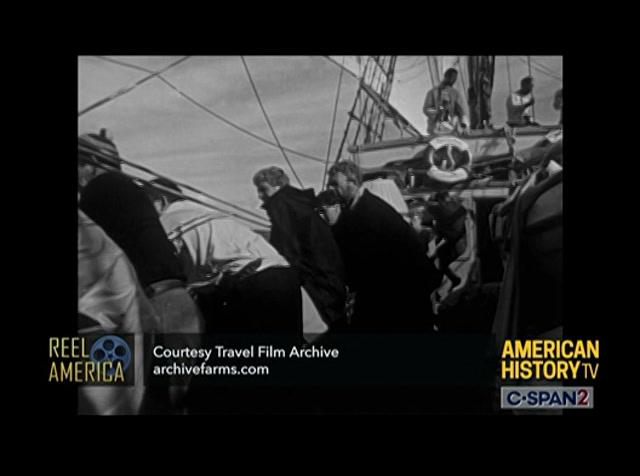 left for the north she sailed for entering the trade lanes to other ships again after weeks on in d.c. mayflower ii at the benefit of three centuries of siemens experience with the atlantic. her southerly route was longer than the pilgrims course but faster by far thanks to more reliable wins and favoring currents. the nantucket lightship was technically the first landfall. real land was to over the horizon but the ship was as good as in port. by air and see the triumphant little square rigger rigd into complete her voyage 5435 miles under sale. in 54 days at sea ice against 66
8:42 am 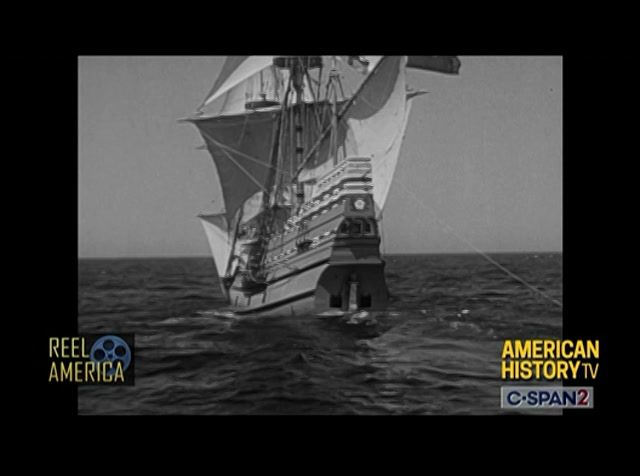 for the original cruise, the modern mayflower achieved a notable feat which help our age to realize how much more was encountered and adored by the pilgrim fathers. as it was in 1620, the harbor was the first port of call. the original vessel lay offshore while her cargo of migrants to the new world of the mayflower, flak -- compact. on the shore of plymouth were wilderness awaited the pilgrimage, now stand -- the captain has been received a heroes ovation at plymouth. ♪ ♪ ♪ close by plymouth rock where
8:43 am 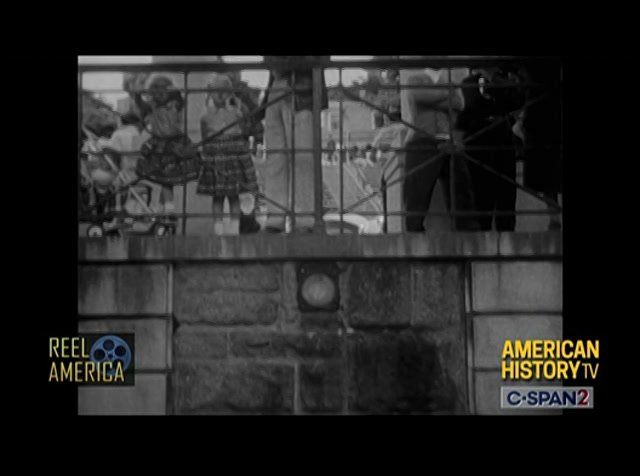 the pilgrims first set foot in the world, the mayflower ii will be docked permanently, living memorial to a great voyage. ♪ >> sunday, december 5 on "in depth" story and conservative commentator victor davis hanson joins us live to talk about war, politics and citizenship in the united states. his book titles include the father of us all, the case are trump and his latest the dying citizens in which he says the idea of american citizenship and the ideals associate with it are disappearing. join in a conversation with your phone calls, facebook comments, texts and tweets for victor davis hanson sunday, december 5 at noon eastern on "in depth" on booktv. before the program visit c-span c-spanshop.org to get your copies of his books.
8:44 am 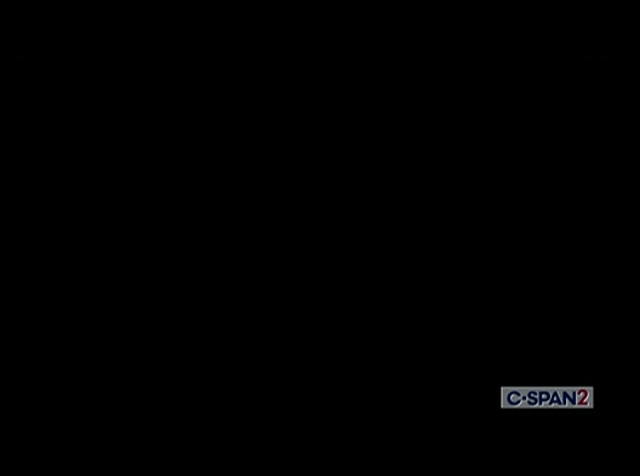 >> american history tv saturdays on c-span2 exploring the people and events that tells the american story. at 11 a.m. eastern on lectures in history explores how the pilgrims became part of the united states founding story in 19th century history textbooks. at 1 p.m. president nixon senior domestic policy advisor gives a behind the scenes of view of the 37th president domestic agenda which included guaranteed family income, additional health insurance programs and support for children's nutrition. on the presidency watch the weddings of 21st daughters at the white house. at 2 p.m. president lyndon johnson's daughter mary's u.s. marine captain charles roth. december 9, 1967. at 3:10 p.m. president nixon's
8:45 am 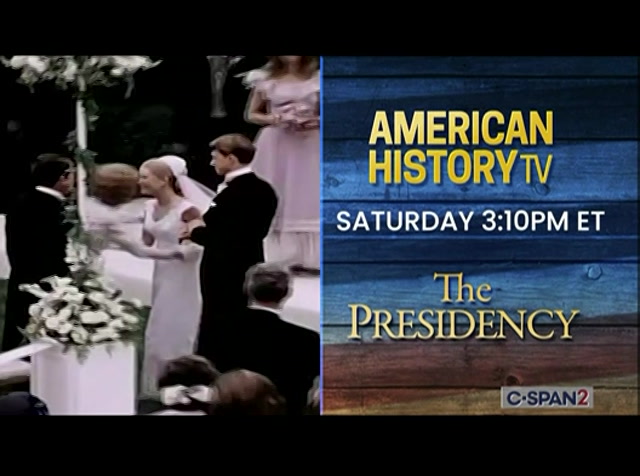 daughter mary's on june 12, 1971 in the first rose garden wedding. >> mr. gorbachev, tear down this wall. and at 5:25 p.m. the hoover institution and the ronald reagan presidential foundation and institute hosts a look back at the evolution of president reagan's "tear down this wall" speech and its importance more than three decades later. the white house speechwriter behind the address participated in the event. exploring the american story. watch american history tv saturdays on c-span2 and find a full schedule on your program guide or watch online any time at c-span.org/history. >> next, we visit plimoth patuxet and plymouth, massachusetts, to explore the re-created 17th century colonial village and talk to
left
right
Borrow Program
tv

This Castle Films newsreel documents the 1957 Atlantic crossing of the Mayflower II, a replica of the ship that brought the Pilgrims to Plymouth, Massachusetts in 1620.