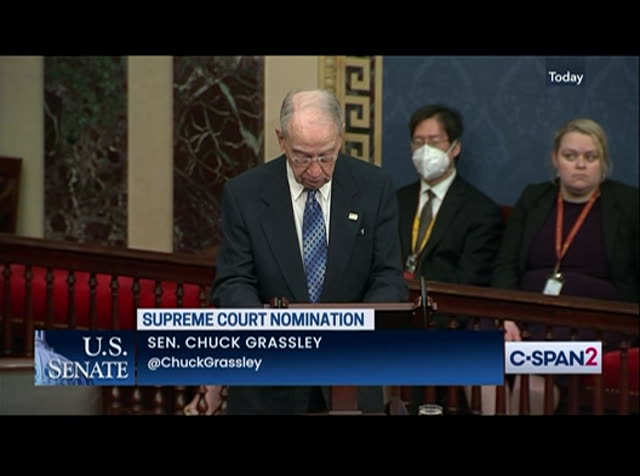 unreviewable discretion. these are just a few examples of judge jackson's judicial activism. because her record clearly shows she does not believe in or act within the limited and proper role of a judge.to so, i will vote against her confirmation. i yield the floor. >> mr. president, this capitol building has served as the backdrop for some of the most notable moment in american history. in this building, wars have been declared. peace treaties have been signed. in the march toward progress is going to move forward or has been stopped in its tracks. today the members of this senate have the opportunity to take a monumental step forward. we will vote to confirm a once in a generation legal talents a
8:50 pm 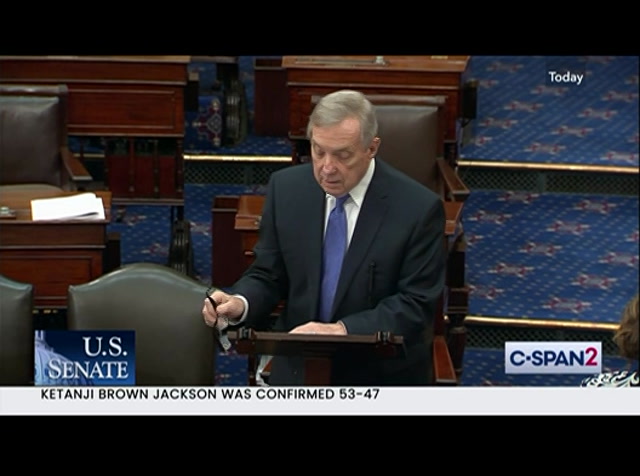 jurist withls outstanding credentials and a lifetime of experience. oand the first ever african-american woman to serve as justice of the supreme court. judge ketanji brown jackson. judge jackson's confirmation will be a glass shattering achievement for america. consider this moment in history when the supreme court first met in this building and february of 1801, there were 1 million slaves in this nation, a nation of 5 million people. this very building was built with the labor of enslaved people. and at the time the court met either black americans nor white women had a constitutionally right to vote. women had no place in that first
8:51 pm 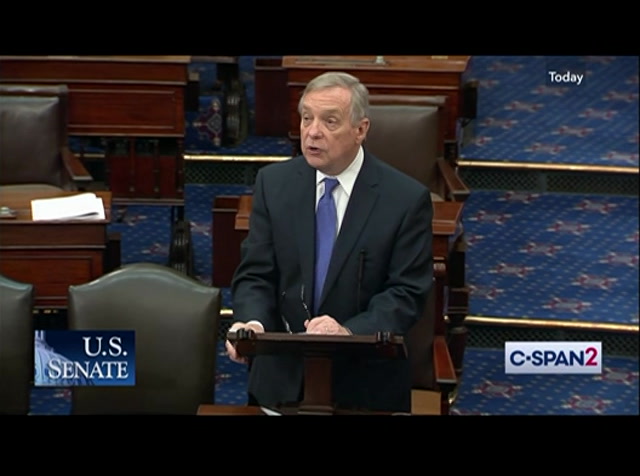 supreme court chamber. and black women could only enter to clean it in the dark of night. we know what followed. america's battles against slavery side blood he civil war. decades of efforts to break down racial barriers and the efforts continue to this day. in our struggle to enfranchise and empower women did not end with the 19th amendment 102 years ago. it continues to this day as well. as we strive to give our daughters the same opportunities we give our sons. this confirmation of the first black woman to the supreme court honors the history that has come before it. it honors the struggles of the past of the men and women who wage them. and this confirmation draws america one step closer, one step to healing our nation. one step closer to a more perfect union. nearly a century after our
8:52 pm 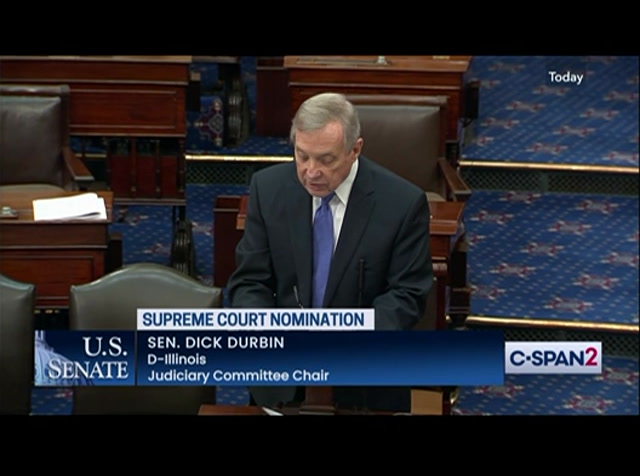 founder we guarantee the rights of citizenship finally to every american including for the first time those who were born into bondage with the ratification of the 14th amendment. it took a long century later for us to expand bonds of liberty again. we ensured the federal government could vigorously protect the right to vote, the most fundamental of rights with the passage of voting rights act of 1967. one victory for progress begin the next. to your staff the voting rights act we confirmed the first black american to ever serve on the supreme court. justice thurgood marshall. i would like to remind you, that was 50 years ago. now, with the passage of that time we are beginning to write another chapter in our nation's quest for equal justice under the law. that chapter begins with three letters j bj with judge ketanji
8:53 pm 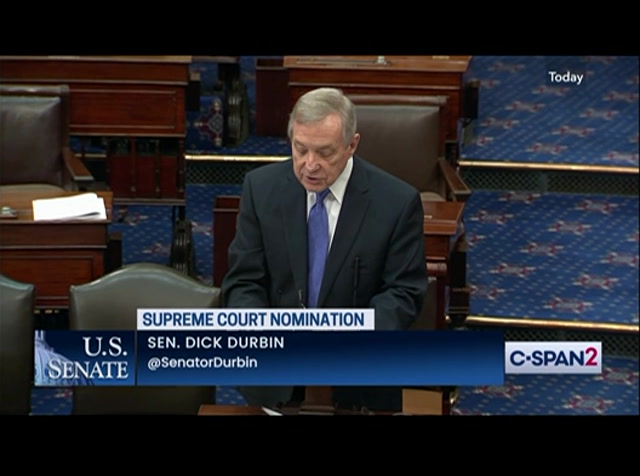 brown jackson confirmation to the highest court in the land, we are not only making history we are carrying on a great american tradition elevating whatever nation's best and bbrightest legal minds to an honored position of service. there is no one more deserving of this high honor. so we have learned over the past month she is the best of us. she has devoted her life to serving our country. she has done so at every level of the federal judiciary. and at every turn she has distinguished herself. but i hear the critics say she is soft on crime. i wonder how they explain she was endorsed by the largest law enforcement agency organization in the america parade the fraternal order of the plays as well as the international chiefs of police. as well as an army of federal prosecutors who have appeared in the courts.
8:54 pm 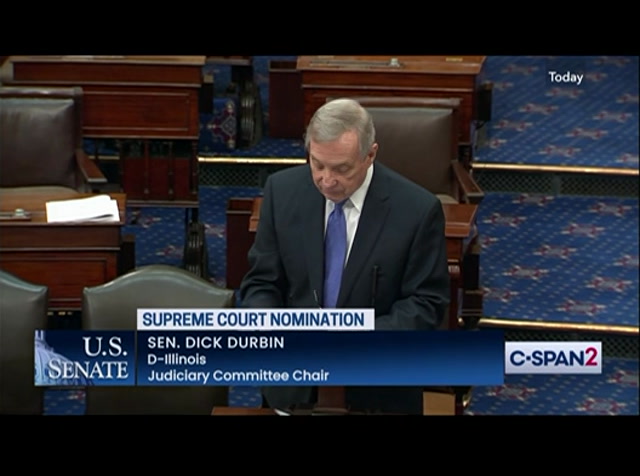 she is dedicated to protecting judicial independence, to advancing freedom and liberty. deciding every case she says from a neutral posture. that is exactly what you will find in evaluating nearly ten years of service on the bench. i hear satirists come to the floor and say there is one opinion i disagree with. rifor goodness sakes, she has issuedhe almost 600 written opinions in ten years on the bench and the district court. she has been reversed a small percentage of the time. i her work speaks for itself. and when you evaluate will find out she is thoughtful and evenhanded prissy american people saw their investments hearing in judiciary committee, judge jackson has the right judicial temperament, calm, collected, she answered every question. even when the questions were hostile and confrontational. she answered them with dignity and grace. and stood by for more than 24 hours of questioning.
8:55 pm 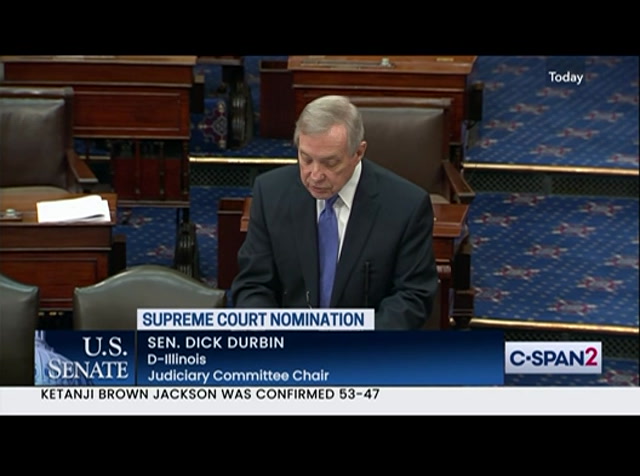 she is a proven consensus builder but she has been confirmed by the senate on the bipartisan basis more than three times, it's three tabs i should say and soon we hope shall be confirmed again by a bipartisan majority. she has earned the support from leaders across the political and ideological spectrum. civil rights leaders, leaders and law enforcement, former federal judges appointed by democrats and republicans. all of them have lined up proudly to endorser. perhaps most importantly, justice jackson willel help ense the law works for the people and the people understand the workings of the court. for many americans, what happens in the courtroom can be cold and impersonal. judge jackson has made a habit of making it real. she looks people in the eye, walks into her decision-making with patients and empathy and she reaches everyone of her decisions by following the facts of the law wherever they lead. she said her opinions can run long, that is by design.
8:56 pm 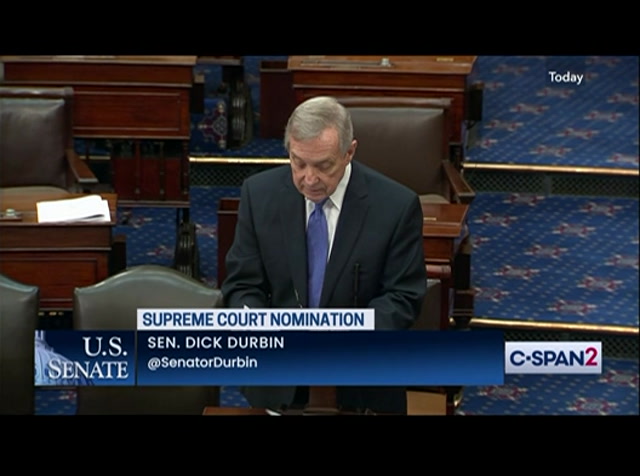 because she wants america to rest assured whether she writes the majority, the concurrence or the dissent they want to know exactly where she stands on the most important issues. serving as chair of the senate judiciary committee during judge jackson's confirmation has been to the honors of my senate experience. i want to get special thanks to the man who spoke before make republican senator chuck grassley of iowa. his friendship and fairness have really guided our relationship throughout the system or process. in the weeks since president biden announced her nomination judge jackson has already lifted the spirit of countless americans inspiring a new generation. inspiring jurists in public servants. millions of americans see themselveser in judge jackson. black americans, members of law enforcement families, working moms, public high school graduates like her fellow palmetto panthers in florida. everywhere i have gone for the last few weeks when i go home,
8:57 pm 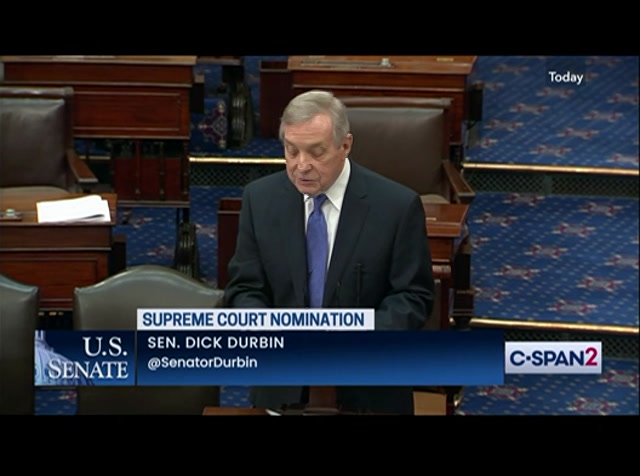 visiting law schools, going to the grocery store, i've been approached by people who been following this nomination closely. they tell me how deeply impressed they are with judge jackson. even under fire from her critics. hannah is one of those people. she is a law student in waukegan, illinois t city on the shores of lake michigan. in a letter to my office hand wrote and i quote her and saying, if you can see it, you can bes it. and i'm very excited to see america's first black female justice. reverend krista is a baptist minister in the city of chicago. combs terminate long line of baptist minister she calls herself a civil rights baby born in 64 the year lbj signed the civil rights act. ricky jones is also from chicago. for civil rights for nearly 60 years since she was a teenager. well, late last month reverend
8:58 pm 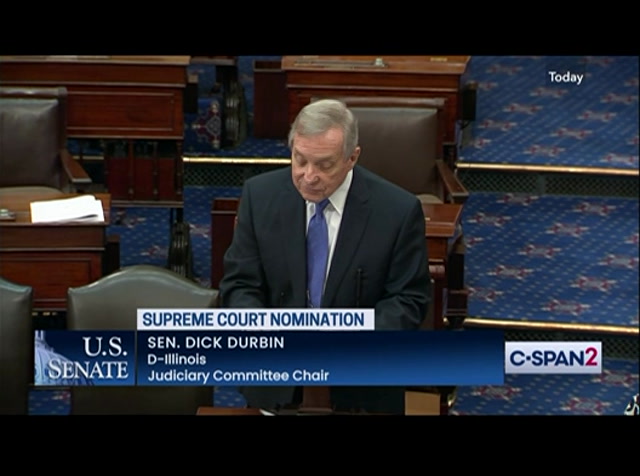 and ms. jones with four other people drove 11 hours from chicago to attend in our of judge jackson's hearing. reverend said she was moved by the judges courage, grace, integrity and wisdom. she imagined what it will be like years from now to tell her future grandchildren what it was like to be inat that room for tt historic moment. and ricky jones said she never even expected to hear about a blackom woman being nominated to the supreme court let alone to be in the room for her hearing. she said it, she watches judge jackson flicked the fulfillment of everything i've worked for my whole life. she thought of all the strong black women who came before her that help make the movement possible. harriet tubman, ida b wells and my personalri late friend the reverend willie barrow a black woman minister from chicago who worked alongside doctor martin luther king.
8:59 pm 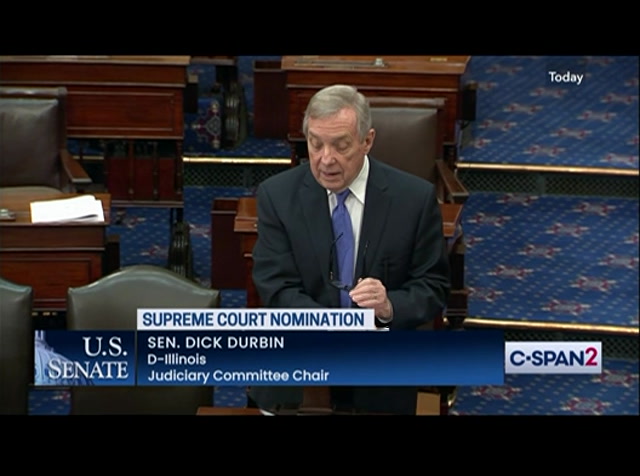 this moment was about them too she said parade this moment is possible because of judge jackson and whoca she is buriedr qualifications, or integrity, her record of excellence. she has earned her seat on the supreme court. that is why it is so unfortunate that several republicans on the judiciary committee did not approach judge jackson's hearing but that same level of fairness and respect as their colleagues. thankfully, thankfully their members in the senate who are willing to rise above the partisan pretty want to particular he commended senator susan collins of maine, senator lisa murkowski of alaska and senator mitt romney of utah for their political courage and their willingness to support a singularly qualified and historic nominee to the supreme court. you know, with center romney announced his support for judge jackson's confirmation i could not help but remember his father the late george who served as governor of michigan in 1960s
9:00 pm 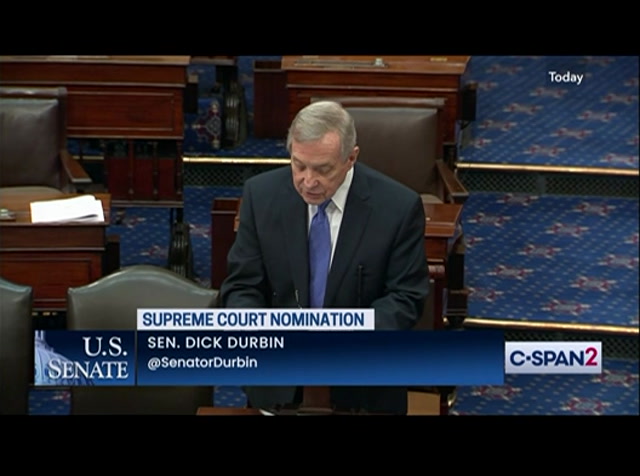 during the height of the civil rights movement. governor george romney knew a thing or two about political courage. as a proud republican governor in 1963, he marched alongside the naacp detroit president edward turner in support of civil rights. that same year were doctor luther king organized a march in detroit, governor george romney declared freedom day in michigan. to my colleague senator mitt romney, you are your father's side. this week marks 54 years since he shot rang out in memphis tennessee claiming the life of doctor martin luther king. an american who spoke with greater moral clarity than nearly any other in our history. : : city striking : he said like anybody i'd like to
9:01 pm 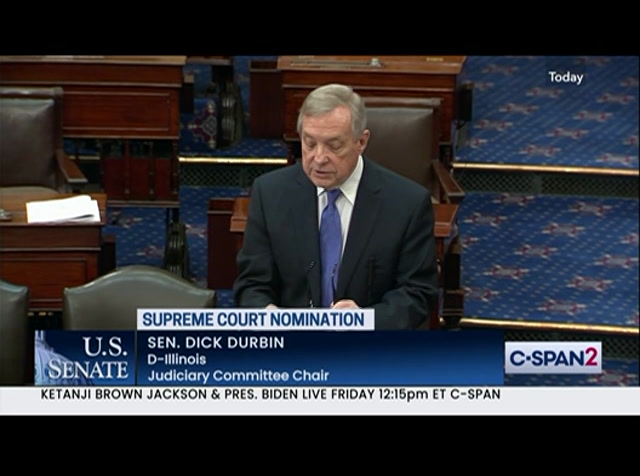 live a long life. longevity has its place, but i'm not concerned about that now. i just want to do god's will. and he's allowed me to go up to the mountain. his next words proved prophetic. dr. king said i've looked over and i've seen the promise land. and i've seen the promised land.i've seen the promised i may not get there with you but i want you to know tonight that we as a people will get to the promised land. ricky jones said she thought about that when she realized the judiciary committee was voting on judge jackson's nomination on the anniversary of doctor king's death. it felt like a prophecy had come to pass. doctor king didn't make it to the promised land but judge jackson's ascension brings us closer to that for place. i would like to close with one last personal plea to my senate colleagues. i hope you will think about
9:02 pm 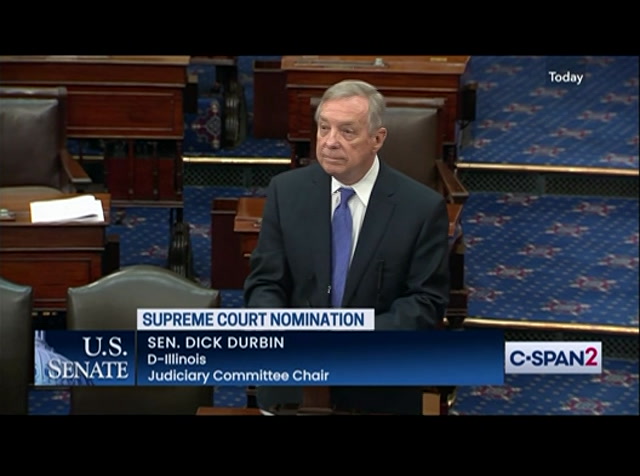 Ahead of the confirmation vote, Judiciary Committee Chair Dick Durbin (D-IL) spoke on the floor in support of Judge Ketanji Brown Jackson.