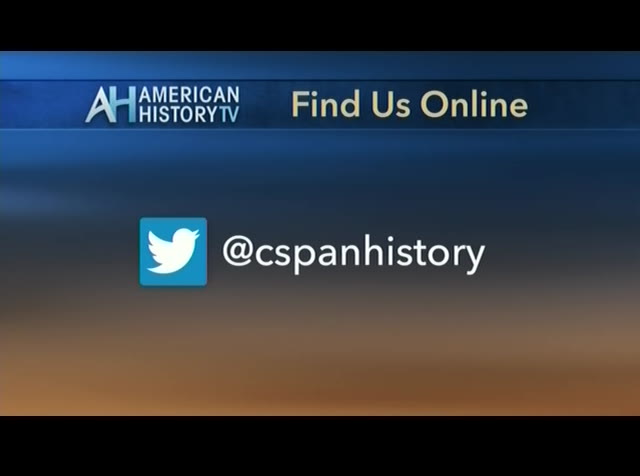 information on our schedule and to keep up with latest street news. ♪ historyr: c-span where unfolds daily. in 1970 nine c-span was created by america's table get -- cable television company. we continue to bring you coverage of congress, the white house, the supreme court and public policy events in washington, d.c., and around the country. c-span is brought to you by your cable or satellite provider. >> abraham lincoln is buried in oak ridge cemetery in spring filed -- springfield alongside his wife. after his funeral and burial services, his coffin was placed in a temporary receiving vault while his tomb was constructed.
11:46 am 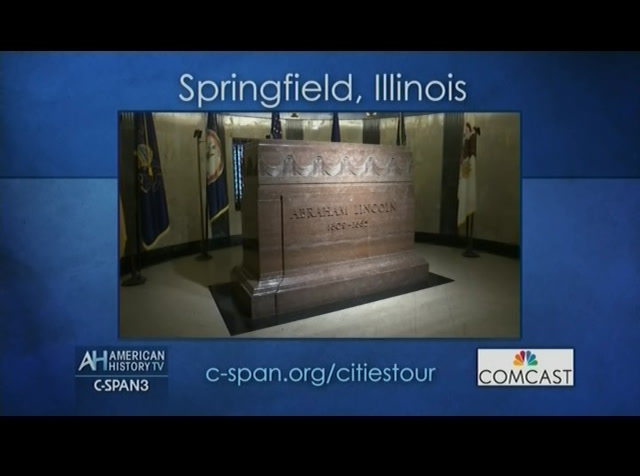 the final structure was dedicated in 1870 four. today he is buried inside a concrete vault. we visit the abraham lincoln library and museum. the presidential library museum opened in 2005, but our collection goes back much further. 1889 they establish the illinois state historical library and since that time we have been collecting treasures that help illustrate our wonderful past. as you might imagine, the illinois story is not complete without a close look at abraham lincoln. in our collection we have about 52,000 pieces covering every aspect of his life. the collection would include about 18,000 monographs written
11:47 am 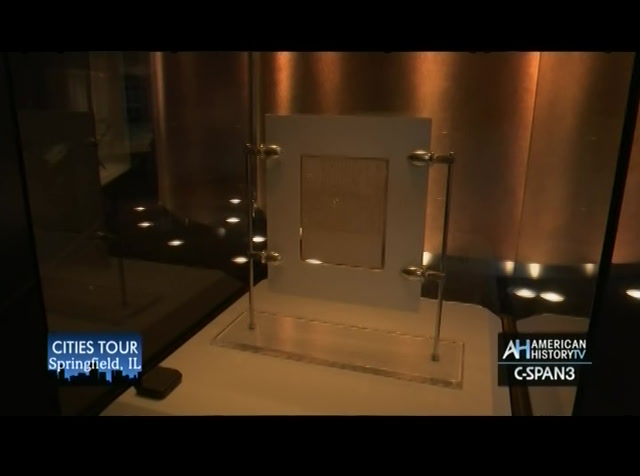 about him. he is the most written about american ever. museum is ablee piecesabout 100 original from our collection on display. there is always reason to come back to the museum because we are rotating those items out. we put new pieces on display all the time, and we like to say a visitor that comes to the museum today, if you come back one later, you will see a whole new group of pieces. today i pulled some pieces out of the vault to show you. ofy help illustrate the life abraham lincoln. this is the oldest piece of writing that lincoln did that survived. a paper that lincoln got his hands on in 1824 when he was
11:48 am 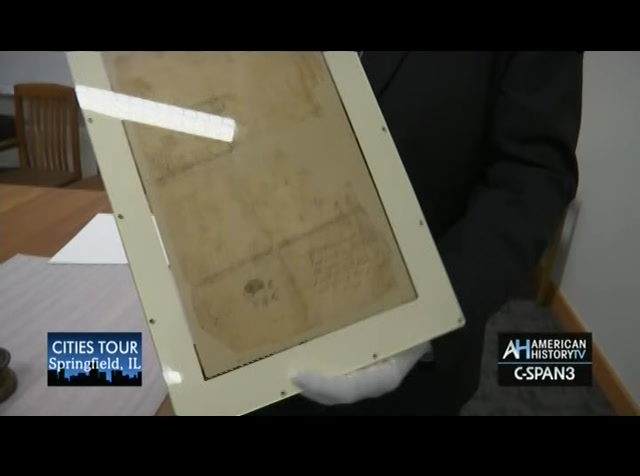 living in a cabin. he got his hands on 11 pieces of paper like this. he made a little notebook, and he used this to work his way through a textbook. you can see he worked his way through all sorts of mathematical problems. he is a little boy that is trying desperately to acquire education. lincoln had less than a year of formal education. so a lot of his education is really self-taught. up by working his way through textbooks. of thatthe first page notebook. i think it is quite remarkable. i will show you a couple of my favorite things. this is the first abraham lincoln autograph that survives. look at how clearly he wrote his
11:49 am 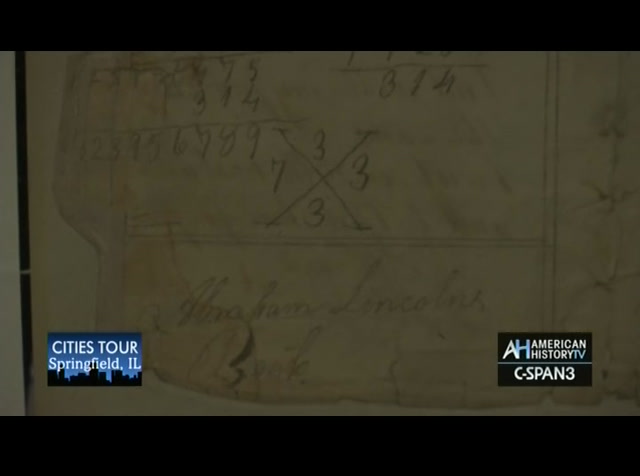 name as a teenage boy. lincoln told us in his autobiography that he wrote, a little autobiography sketch, that his father had never done more in the way of writing then to sign his own name. you can see he wanted a different life than his father had. his father had a rough signature. later in his life, his father is just making his mark on documents. abraham lingering wanted something different -- lincoln wanted something different for his life. he wanted a life that might include things like being a lawyer, a politician. he did not want to spend his life in the wilderness. goodarned how to make a signature and also what is so special about this document, on the back i think he might've got a little bored of working out problems and he wrote a little poem. abraham lincoln is my name.
11:50 am 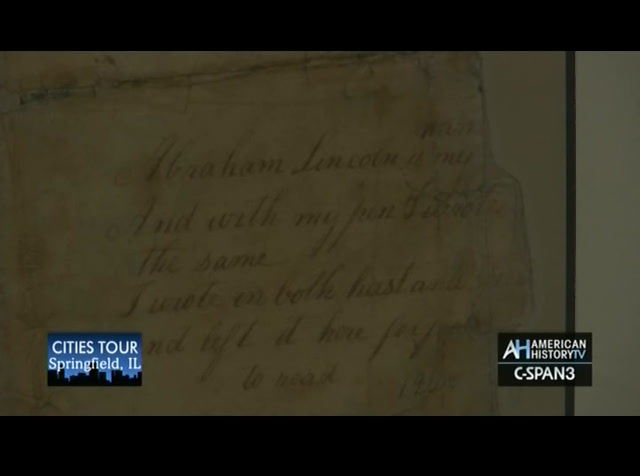 with my pen i wrote the same. i wrote in both haste and speed and left it here for fools to read. really interesting piece in our collection. it is not a fancy piece. it is a common inkwell from the middle of the 19th century, but this participated in an extraordinary moment in history. that is when abraham lincoln crafted his and our goal address. he used this. this inkwell as he is searching for the words that will both be stern as well as reassuring to those folks in the southern states. this inkwell that he uses as he seclude himself in springfield at a location where he will not be bothered by all the onlookers, the individuals
11:51 am 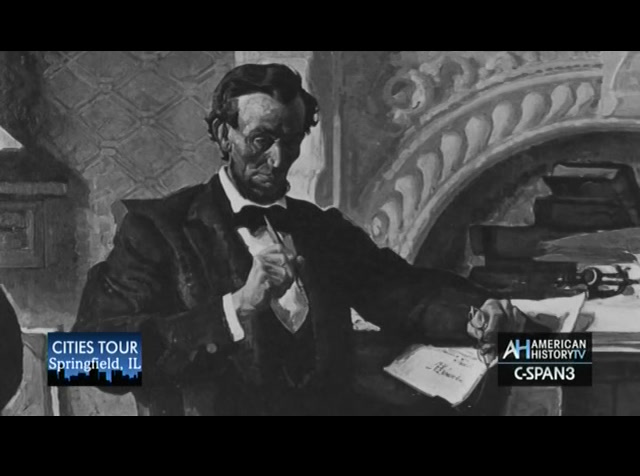 king for a public statement. mr. lincoln is going to try to craft words using this inkwell. at the time of his assassination, when individuals were going through his office to office,contents of his this quill pen was on his desk. when he was a little boy in southern indiana, he was probably using them as he was writing. during his presidency, he wasn't using quelled pens. pens.ll he was using modern pens. quill at found this the time of his assassination, it was sitting next by a beautiful gold pen. why did he have a -- have them both sitting next to each other on his desk?
11:52 am 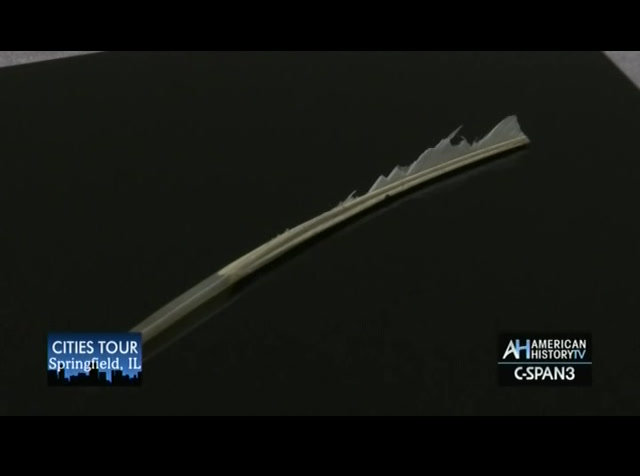 it is speculation, but may be the one pen represents where he began in life in that log cabin with a dirt floor with less than a year of formal education, and may be the gold one symbolizes what he achieved. he is president, and at the time of his death, he is one of the most powerful men in the world. it is that evolution that lincoln talked about during his presidency when he talked to soldiers as he was reviewing soldiers at the end of the war, he was pleading with them to continue on the fighting until the war was finally over. that is the lesson that he would tell the soldiers. that is why america is worth whiting four. it is also probably a hint at why he hated slavery so much
11:53 am 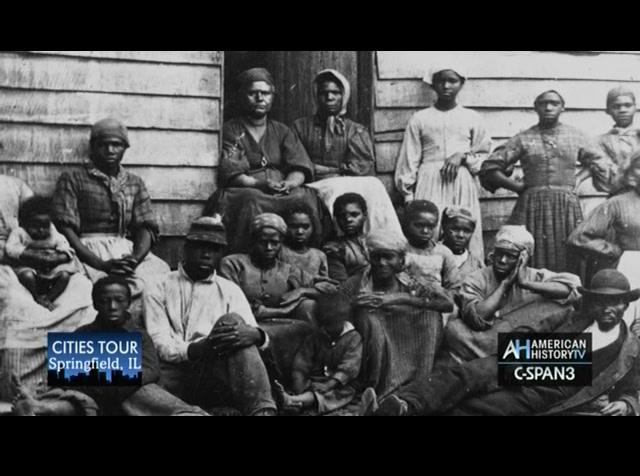 because slavery is an artificial barrier it only allowed a slave in america only to rise so far, and it hindered their ultimate growth. robert e lee surrendered to grant in 1865 at appomattox. it is the end to the war. there were other armors still in the fields, but lee's army is the big ones. lincoln, as you might imagine, was in good spirits. he decided to see a play. they went to ford theater, and that evening they saw a play. significant that it was not a tragedy that they went to go see. they wanted to see a comedy. they were in good spirits. at a quarter after 10:00 that evening, a well-known actor made his way into the presidential box, and he murdered the
11:54 am 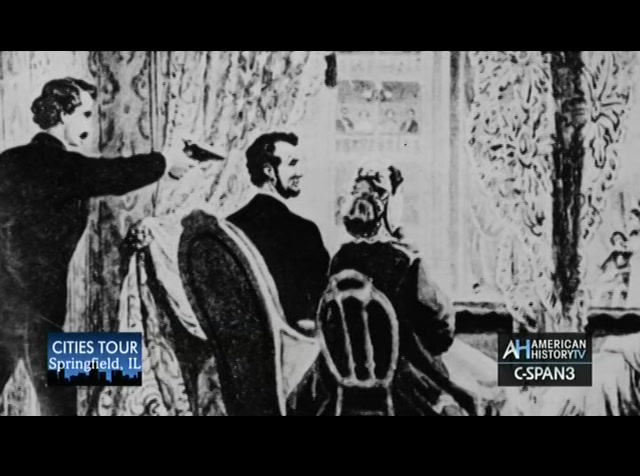 president of the united states as he was holding hands with his wife. helps illustrate real tragedy of that evening. the fan that mary lincoln brought with her to the theater that night. it was probably quite striking when it was brand-new. it had ostrich plumes that came off the top. this was a brutal reminder to mary about the worst night of her life. as you can imagine, she did not want to keep it. she got rid of it, and it became all the collectors item way to do day where it has its
11:55 am 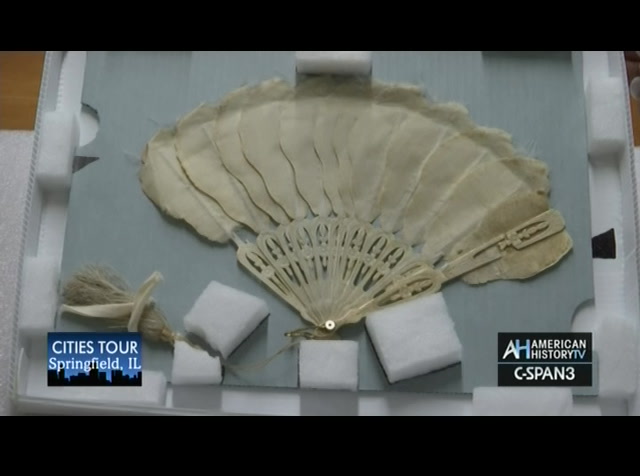 place in this museum. mary lincoln had a fascinating life. she is america's most controversial first lady. mary had a tragic wood hood as well. could asning -- widow well. she had lost a little boy before the presidency. she lost another little boy during the later years. and she lost another one who was really her constant companion. things went downhill for her after that. in 1875, her last remaining son made a decision to have his mother involuntarily committed to an asylum. she spent about four months in a private santa tape -- sanitarium in illinois. she never forgave her son, robert, for having done that.
11:56 am 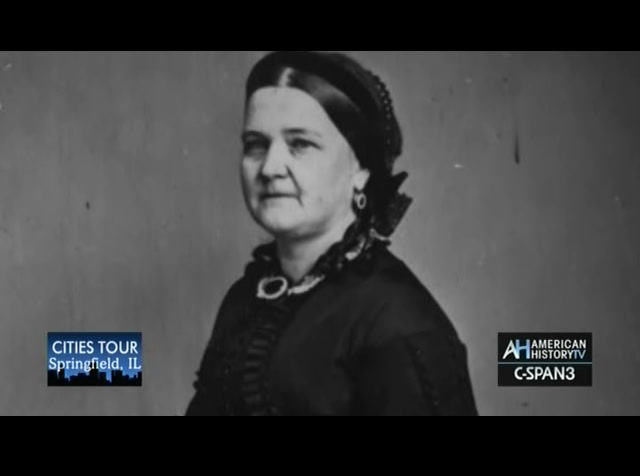 episode in the life of mary lincoln. this is another relic from the assassination. these are the gloves that were in abraham lincoln's pocket on the night of the assassination. a custom of the time to have these in your pocket when you are shaking people's hands at an official event. these are a pair of white leather gloves. over time they have probably shrunk a bit. you can get a sense of his hands. he is still the tallest president in american history. he kept these gloves in his pocket. booth fired that shot at the back of mr. lincoln's head at ford's theater, the
11:57 am 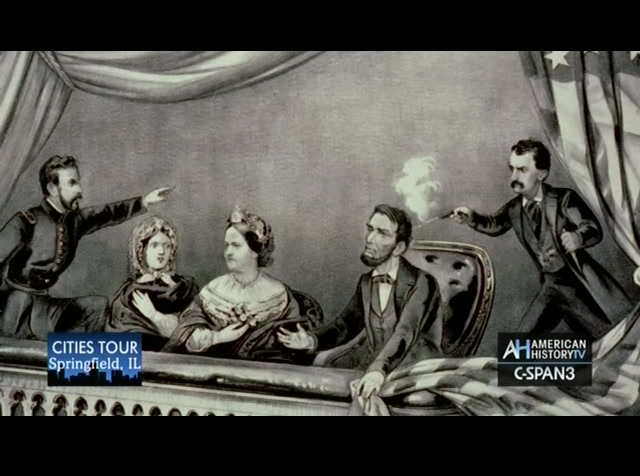 doctors that entered the box could not immediately identify where the wound was. it took several minutes for a doctor prodding around before he found the entry wound on the back of his head. bud was not coming out of the wound until the doctor placed his finger inside the wound, and then blood began to flow. mr. lincoln was laid out on the ground in the presidential box. as the lead began flowing, it went down the length of his body until it went into his pocket and made its way onto the gloves. you can see the remnants of the blood on these gloves today. really afact is the brutal end that mr. lincoln met. it is important for visitors to see original pieces on display, be it a document that lincoln
11:58 am 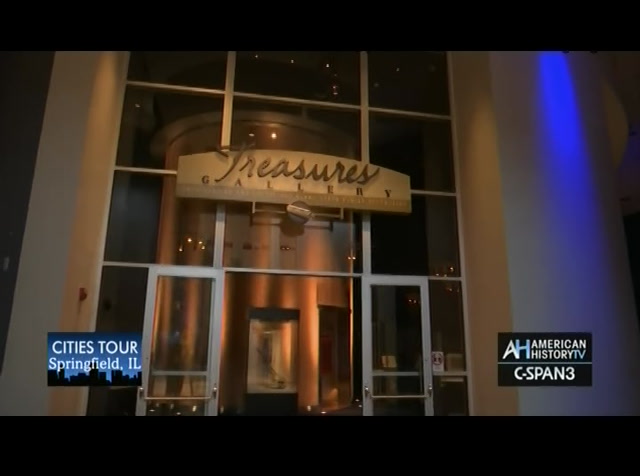 and everyday piece that might've been in his home that he interacted with as he got ready for the day. those pieces are important as people walked to the museum because there is power and magic in a museum artifact. there is something to be said for standing in front of the actual object. you can read about it. you can see it in a different format, maybe in a book, but when you stand in front of it, there is power in the piece. i think the greatest power those pieces have is they remind us that figures like abraham lincoln, he is just a human being being -- being. you understand that abraham lincoln was a human being. are -- announcer: our staff recently traveled to illinois to learn about its rich
11:59 am 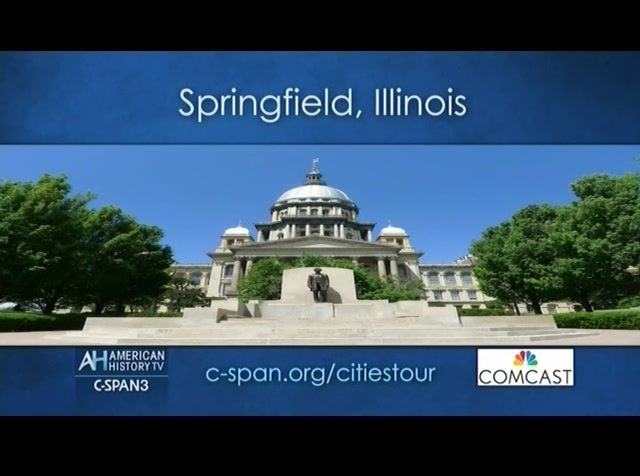 history. /citiesore at c-span.org tour. you are watching american history tv all weekend every weekend on c-span3. if beale street could talk received three oscar nominations for original score, best supporting actress and best screenplay. tonight we will discuss the movie based on the 1974 james baldwin novel with the washington post local editor. >> i thought the film was beautiful. the film was loving and lovely. i think his writing really does deal with love. whether it is universal love or loving oneself, love between people and society, i really is the over rising --
12:00 pm 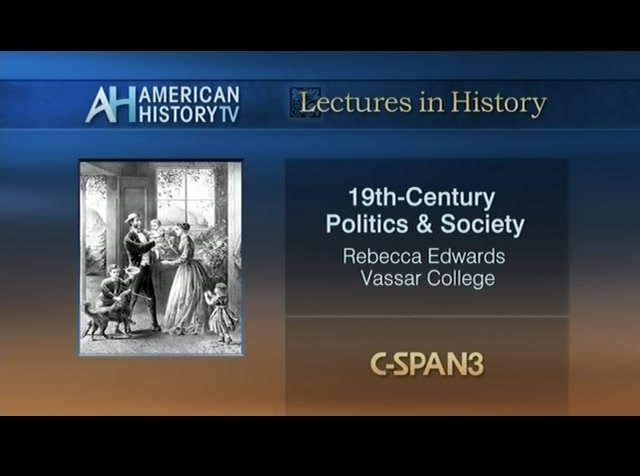 overreaching scene. he was so passionate in fighting for the rights of african americans. i think sometimes people mistake that for anger. not angry but forceful in his denunciation of racism. >> next on lectures in history, vassar college professor rebecca edwards teaches a class about the differences between 19th century political parties and their views on gender roles, racial equality, and family dynamics. she describes the transition from a patriarchal family unit before the civil war to a reconstruction era ideal of a nuclear family comprised of a husband as breadwinner and a wife in charge of the domestic sphere. her class is about one houd
left
right
Borrow Program
tv

The Abraham Lincoln Presidential Library & Museum contains over 52,000 original items pertaining to the 16th President. Archives Director Samuel Wheeler went inside the Lincoln Vault to showcase some of the museum's rarest items.