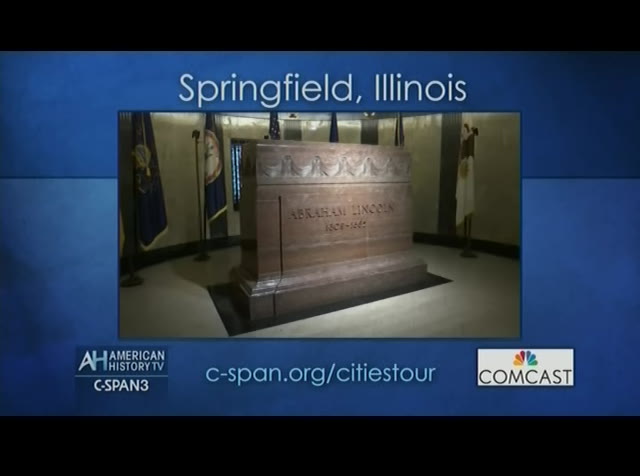 in a temporary receiving vault while his tomb was constructed. the final structure was made in 1874. today he is buried inside a concrete vault, 10 feet below the ground. next, we is at the abraham lincoln library and museum. it opened its doors in 2005. our collection goes back much further. in 1889 they establish the illinois state historical library and ever since that time, we have been collecting all the treasures that help illustrate illinois wonderful past. as you might imagine, the illinois story is not complete really close look at abraham lincoln's life. in our collection we have about 52,000 pieces that cover every
12:28 am 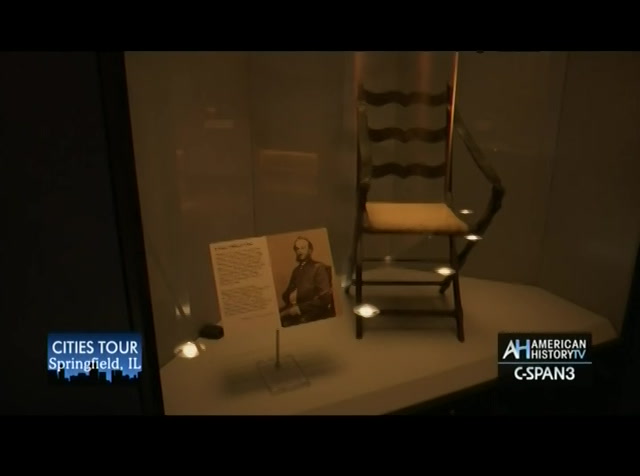 aspect of his life. the collection would include about 18,000 written pieces. he is the most written about american ever. which is quite staggering. day a visitor can see about 100 original pieces from our collection that are on display. there is always a reason to come back to the abraham lincoln presidential museum. we are rotating those items out and putting new pieces on display all of the time. we always like to say a visitor that comes today, if you come back one year later you will see a whole new group of 100 pieces. i pulled some pieces out of our vault. ofy illustrate the life abraham lincoln. you first the oldest piece of writing he did that survived. of paper thate
12:29 am 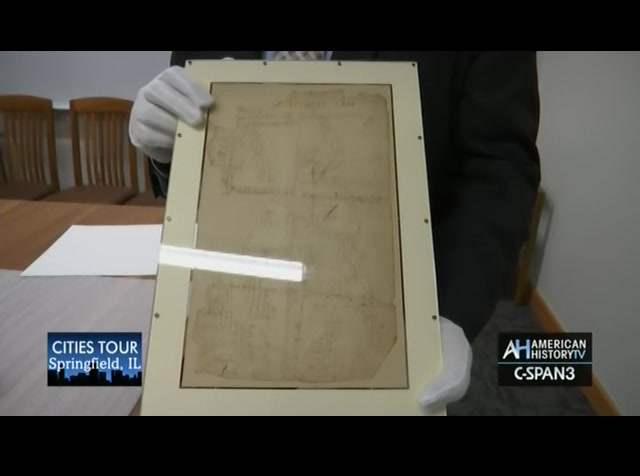 abraham lincoln got his hands on in 1824 when he was living in the cabin in the middle of the wilderness. he got his hands on 11 pieces of paper just like this. he made a little notebook. he used this to work his way through a textbook. you can see, he worked his way off -- through all sorts of mathematical problems. multiplication, he is a little boy that is trying desperately to acquire an education. abraham lincoln had less than a year of formal education. a lot of his education is really self-taught. he picks it up by working his way through little textbooks. in thatthe first page notebook. i think it is quite remarkable. i will show you a couple of my favorite things. this is the first autograph that
12:30 am 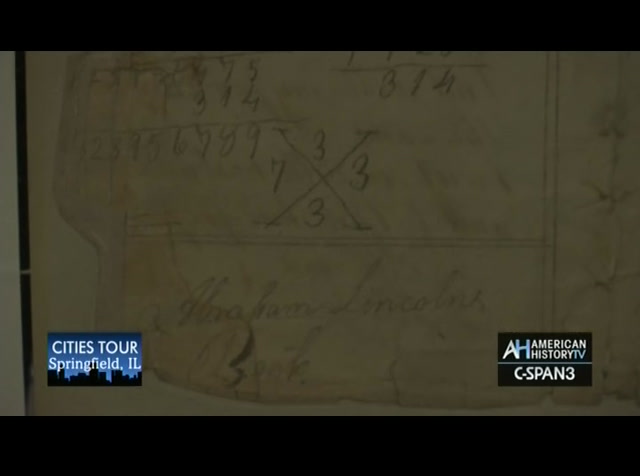 survives. look how clearly he wrote his name as a young teenage boy. he told us in his autobiography that he wrote for the election that his father had never done more in the way of writing then to sign his own name. you can see he wanted a different life than his father had. his father had a rough signature. later in his life, his father is just making his mark on documents. abraham lincoln wanted something different for his life. he wanted a life that might include things like being a lawyer, a politician. he did not want to spend his life in the wilderness. he learned how to make a good signature and also what is so special about this document, on the back i think he might've got a little bored of working out problems and he wrote a little poem.
12:31 am 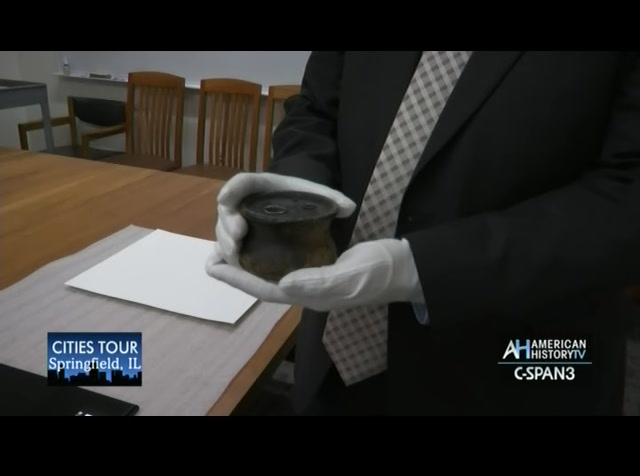 abraham lincoln is my name. with my pen i wrote the same. i wrote in both haste and speed and left it here for fools to read. this is a really interesting piece in our collection. it is not a fancy piece. it is a common inkwell from the middle of the 19th century, but this participated in an extraordinary moment in history. that is when abraham lincoln crafted his inaugural address. he used this. he is using this inkwell as he is searching for the words that will both be stern as well as reassuring to those folks in the southern states. it is this inkwell that he uses as he secludes himself in springfield at a location where
12:32 am

he will not be bothered by all the onlookers, looking for a public statement. mr. lincoln is going to try to craft words using this inkwell. at the time of his assassination, when individuals were going through his office to collect contents of his office, this quill pen was on his desk. when he was a little boy in southern indiana, he was probably using them as he was writing. during his presidency, he wasn't using quill pens. he was using modern pens. when they found this quill at the time of his assassination, it was sitting next by a beautiful gold pen. why did he have them both
12:33 am

sitting next to each other on his desk? it is speculation, but may be the one pen represents where he began in life in that log cabin with a dirt floor with less than a year of formal education, and may be the gold one symbolizes what he achieved. he is president, and at the time of his death, he is one of the most powerful men in the world. it is that evolution that lincoln talked about during his presidency when he talked to soldiers as he was reviewing soldiers at the end of the war, he was pleading with them to continue on the fighting until the war was finally over. that is the lesson that he would tell the soldiers. that is why america is worth fighting for.
12:34 am 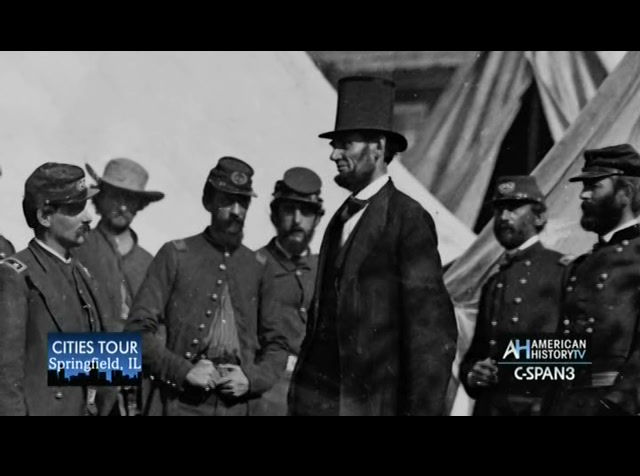 it is also probably a hint at why he hated slavery so much because slavery is an artificial barrier. it only allowed a slave in america only to rise so far, and it hindered their ultimate growth. robert e lee surrendered to grant in 1865 at appomattox. it is the virtual end to the war. there were other armors still in the fields, but lee's army is the big five days later, one. lincoln, as you might imagine, was in good spirits. he decided to see a play. they went to ford theater, and that evening they saw a play. i think it is significant that it was not a tragedy that they went to go see. they wanted to see a comedy. they were in good spirits. at a quarter after 10:00 that evening, a well-known actor made
12:35 am

his way into the presidential box, and he murdered the president of the united states as he was holding hands with his wife. this piece helps illustrate real tragedy of that evening. this was the fan that mary lincoln brought with her to the theater that night. it was probably quite striking when it was brand-new. it was ivory base with silk. it had ostrich plumes that came off the top. this was a brutal reminder to mary about the worst night of her life. as you can imagine, she did not want to keep it. she got rid of it, and it became really a collectors item all the
12:36 am 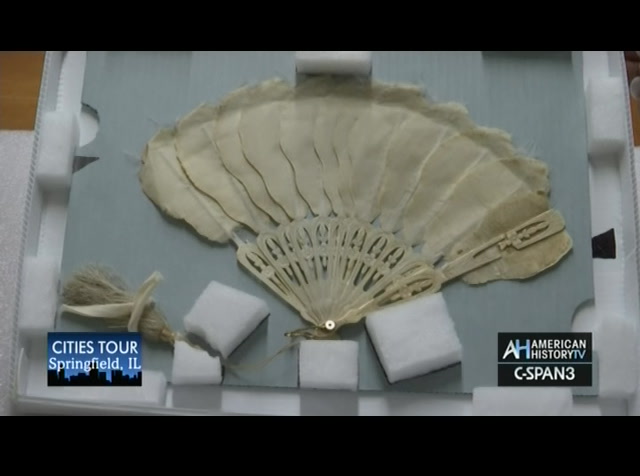 way to do day where it has its place in our museum. mary lincoln had a fascinating life. she is america's most controversial first lady. she had a very tragic widowhood. the remaining years of her life were not happy and pleasant. she had lost a little boy before the presidency. she lost another little boy during the later years. idowhood she lost a third little boy. things went downhill for mary after that. in 1875, her last remaining son made a decision to have his mother involuntarily committed to an asylum. she spent about four months in a private sanitarium in illinois.
12:37 am 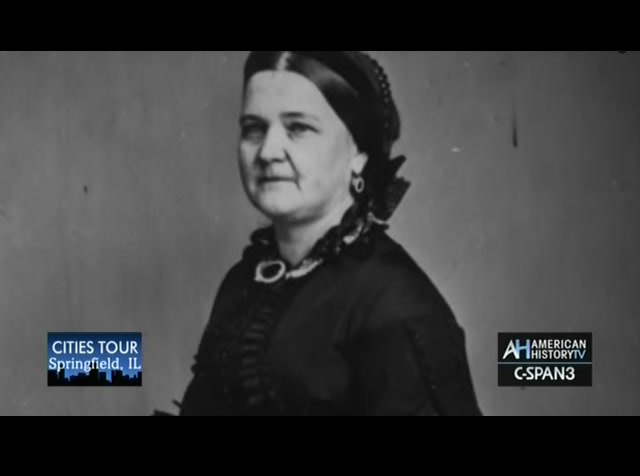 she never forgave her son, robert, for having done that. it is a tragic episode in the life of mary lincoln. this is another relic from the assassination. these are the gloves that were in abraham lincoln's pocket on the night of the assassination. it was a custom of the time to have these in your pocket when you are shaking people's hands at an official event. these are a pair of white leather gloves. over time they have probably shrunk a bit. you can get a sense of his hands. he is still the tallest president in american history. he kept these gloves in his pocket. when booth fired that shot at
12:38 am 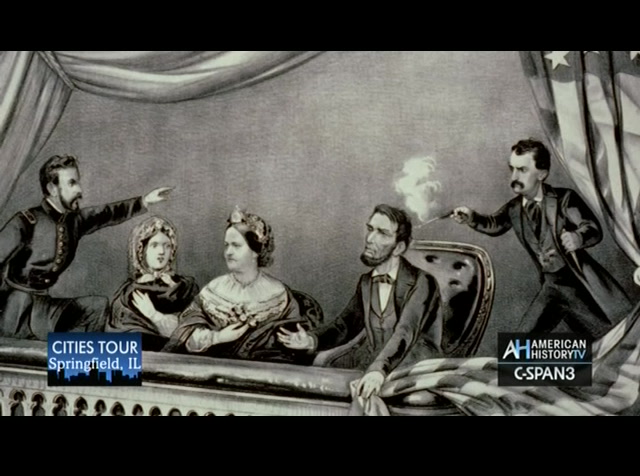 the back of mr. lincoln's head at ford's theater, the doctors that entered the box could not immediately identify where the wound was. it took several minutes for a doctor prodding around before he found the entry wound on the back of his head. blood was not coming out of the wound until the doctor placed his finger inside the wound, and then blood began to flow. mr. lincoln was laid out on the ground in the presidential box. as the blood began flowing, it went down the length of his body until it went into his pocket and made its way onto the gloves. you can see the remnants of the blood on these gloves today. this artifact is really a reminder of the brutal end that mr. lincoln met. it is important for visitors to
12:39 am

see original pieces on display, be it a document that lincoln wrote, an everyday piece that might've been in his home that he interacted with as he got ready for the day. those pieces are important as people walk through the museum because there is power and magic in a museum artifact. there is something to be said for standing in front of the actual object. you can read about it. you can see it in a different format, maybe in a book, but when you stand in front of it, there is power in the piece. i think the greatest power those pieces have is they remind us that figures like abraham lincoln, he is just a human being. when you stand in front of those pieces, you understand that abraham lincoln was a human being. announcer: our staff recently
12:40 am 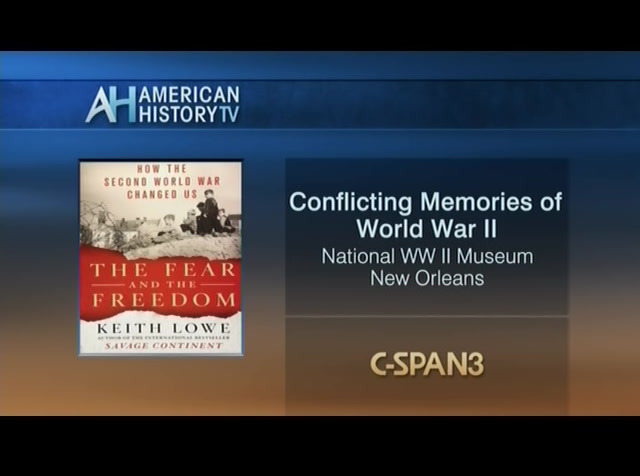 traveled to springfield, illinois to learn about its rich history. learn more at c-span.org/cities tour. you are watching american history tv all weekend every weekend on c-span3. >> next, on american history tv, keith lowe talks about what we can learn from conflicting historic interpretations. he is the author of "the fear and the freedom: how the second world war changed us." this talk was part of a three-day conference hosted by the national world war ii museum in new orleans. >> our next speaker's latest book could not have been released at a more appropriate time for the museum's purposes. as we continue the design on our last pavilion, the liberation pavilion, our many historians have been reading whatever we
left
right
Borrow Program
tv

The Abraham Lincoln Presidential Library & Museum contains over 52,000 original items pertaining to the 16th President. Archives Director Samuel Wheeler went inside the Lincoln Vault to showcase some of the museum's rarest items.