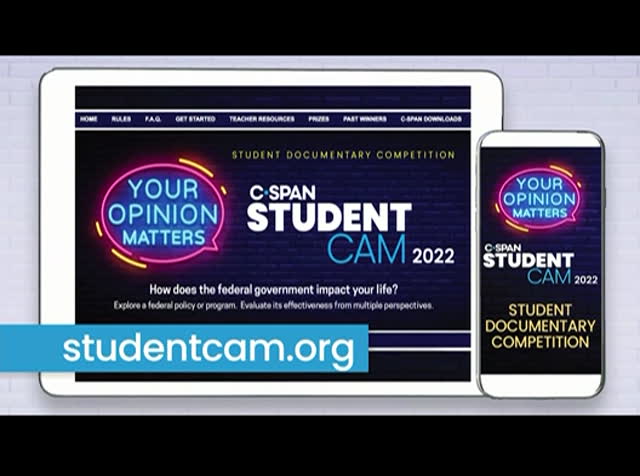 studentcam.org. >> in 2013, then senate majority leader harry reid pushed through a historic change to senate rules, but made it easier to approve former president obama's nominees. 52 senate democrats and independents voted to reduce the threshold from 60 votes to 51 votes for senate approval of judicial nominees. back in 2013, three democrats voted against changing the rules, including senator joe manchin. chuck schumer will bring a voting rights measure to the floor. he plans on trying to change senate filibuster rules to allow the voting package to move forward with a simple majority rather than the 60 votes needed to bring it to the floor. here is a look back at the senate filibuster debate in 2013 before and after the vote took place. sen. reid: the american people
8:37 pm 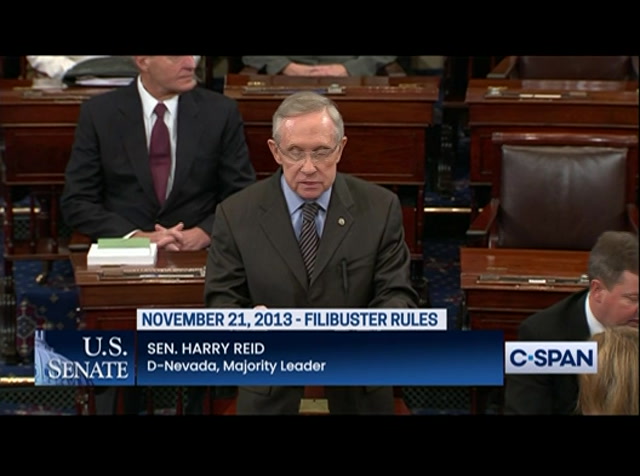 believe congress is broken. the american people believe the senate is broken. and i believe the american people are right. during this congress, the 113th congress, the united states has wasted an unprecedented amount of time on procedural hurdles and partisan obstruction. the work of this country goes undone. congress should be passing legislation that strengthens our economy, protects american families. instead, we are burning wasted hours and wasted days between filibusters. i could say we are burning wasted days and wasted weeks between filibusters. even one of the senate's most basic duties, confirmation of presidential nominees, has become completely unworkable. mr. president, there has been an
8:38 pm 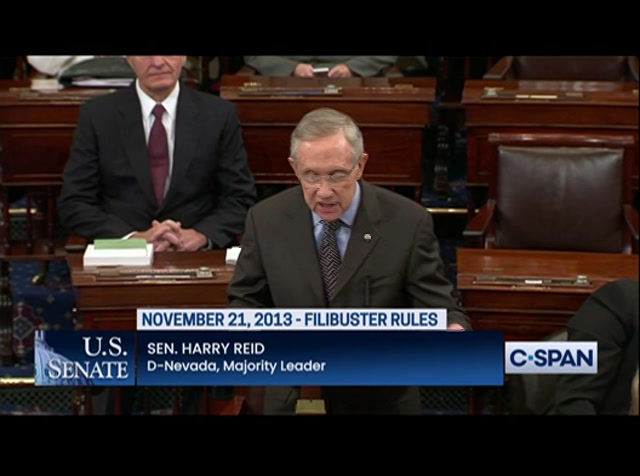 unbelievable, unprecedented obstruction. for the first time in the history of our republic tomorrow public and's have routinely used the filibuster to prevent president obama from appointing or confirming judges. it is truly a troubling trend that republicans are willing to lock executive branch nominations even when they have no objection to the qualifications of the nominee. instead, they block qualified nominees to circumvent the legislative process. they block qualified nominations to force wholesale changes. they block qualified nominees to restructure entire executive branch departments. they don't president obama -- they don't want president obama to appoint any judges to certain courts. the need for change is so very obvious. it is clearly visible. it is manifest that we have to
8:39 pm 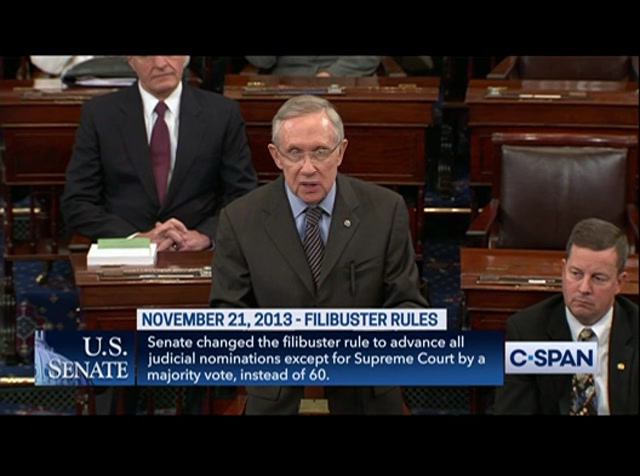 do something to change things. in the history of our country, some 230 plus years, there have been 160 filibusters and judicial nominations. half of them have occurred in the obama administration. 230 plus years, 50%. 4.5 years, 50%. is there anything fair about that? these nominees deserve an up or down vote, yes or no. the republican filibusters denied them a fair vote, any vote, and deny the president. gridlock has consequences. it is not only bad for president obama, but for this body, the united states senate, it is bad for our country. it is bad for our national security and bad for our economic security.
8:40 pm 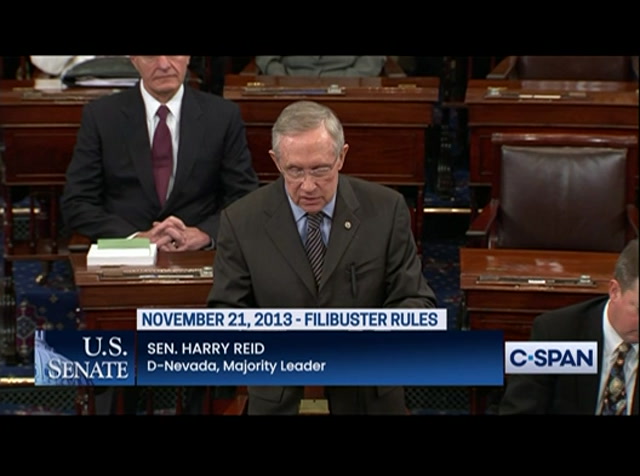 that is why it is time to get the senate working again, not for the good of the current democratic majority or some future republican majority, but for the good of the united states of america. it is time to change the senate before this institution becomes obsolete. mr. president, at the beginning of this congress, the republican leader pledged, "this congress shall be more bipartisan than the last congress." mr. president, we are told in scripture, let's take for example the old testament, the book of numbers. promises, pledges, a vowel. one must not break his word. engineer ike tomorrow public and's promised to work with the majority to process nominations in a timely manner by unanimous consent, except in extra
8:41 pm 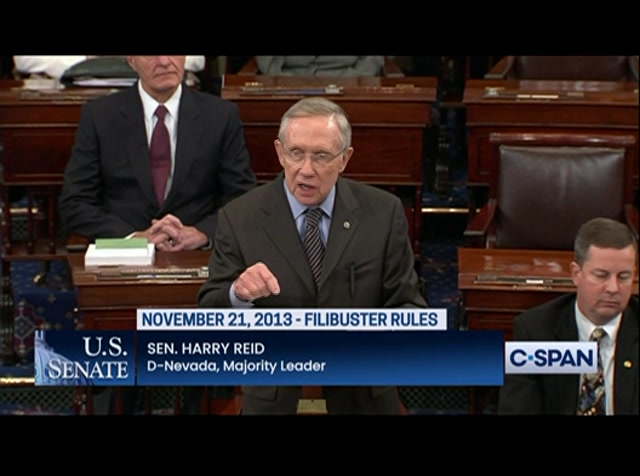 ordinary circumstances. mr. president, exactly three weeks later, republicans mounted a first in history filibuster of a highly qualified nominee for secretary of defense, despite being a former republican senator, a decorated war hero having saved his brother's life in vietnam. chuck hagel's nomination was pending in the senate for a record 34 days, more than three times the previous average of a secretary of defense. remember, our country was at war. republicans have blocked executive nominees like secretary hagel not because they object to their qualifications but simply because they seek to undermine the very government in which they were elected to serve. take the nomination of richard cartwright to lead the consumer financial protection bureau. there was no doubt about his ability to do the job.
8:42 pm 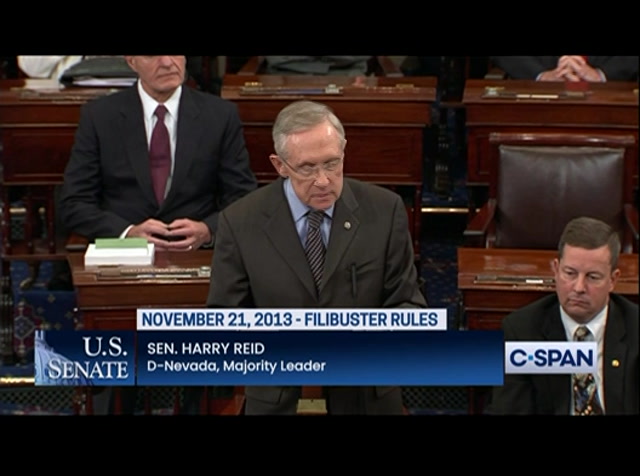 but to consumer financial protection bureau, the brainchild of elizabeth warren, went for more than two years without a leader because republicans refused to accept the law of the land, because they wanted to rollback a law that protects consumers from the greed of wall street. so i say to my republican colleagues, you don't have to like the laws of the land, but you do have to respect those laws and acknowledge them and abide by them. obstruction continued unabated for seven more months until democrats threatened to change senate rules to allow for votes on executive nominations. in july, after obstructing dozens of executive nominees for months and some for years, republicans once again promised they would end the unprecedented obstruction. one look at the senate's executive calendar shows
8:43 pm 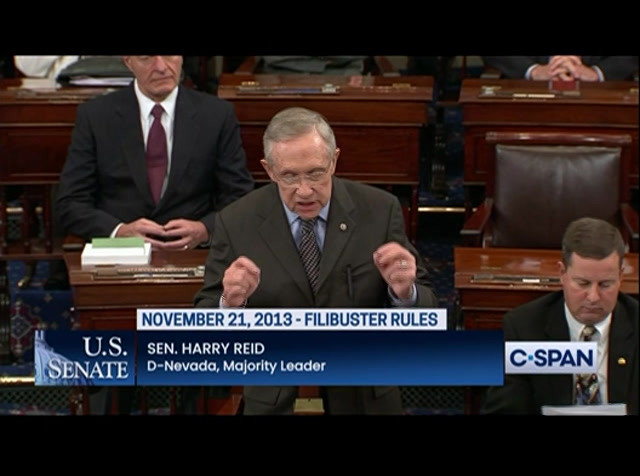 nothing has changed since july. republicans have consider the record of obstruction. republicans continued their record of obstruction as if no agreement had been reached. there are currently 75 exec it of branch nominations ready to be confirmed -- executive branch nominations ready to be confirmed by the senate. the agency that safeguards the water that my children and my grandchildren drink and the air that they breathe has waited almost 900 days for confirmation. we agreed in july that the senate should be confirming nominees to ensure the proper function of government. consistent and unprecedented obstruction by the republican caucus has turned consent into deny and obstruct.
8:44 pm 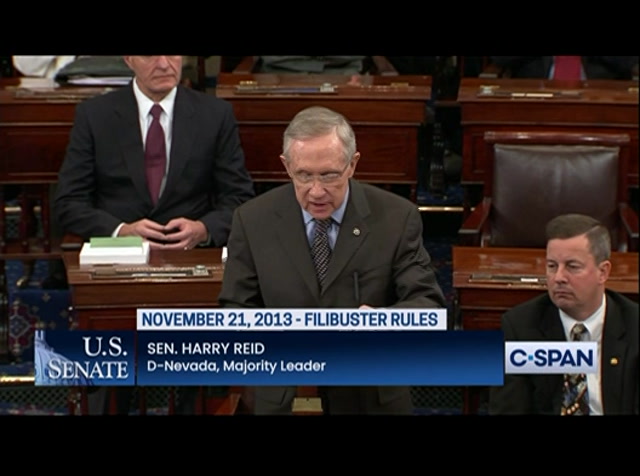 in addition to the filibuster for secretary of defense for the first time in history, senate republicans also blocked a sitting member of congress from an administration position for the first time since 1843. as a senior member of the house financial service committee, the understanding of the mistakes that led to the housing crisis made him uniquely qualified to serve as a miss trader of the federal housing finance agency. basically do not like the consumer protections that he was nominated to develop into implant. in the last three weeks alone, the republicans have blocked up or down votes on three highly qualified nominees for that circuit court of appeals. they twice turned down the most
8:45 pm 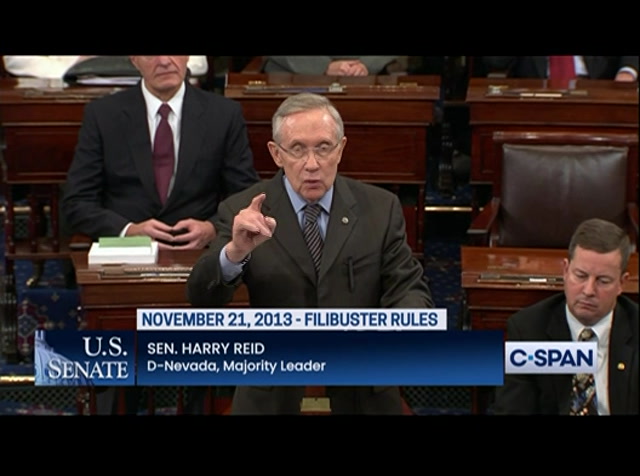 qualified people in 30 years of senate that i have ever seen come before this body. caitlin halligan. three more to add to that list. the d.c. circuit judge is considered by many to be the highest court in the land, and may the most important. they deal with complex cases. republicans have blocked president obama's five nominees to the d.c. circuit judge, whereas democrats approved president bush's six nominations to this important court. today, the d.c. circuit judge has more than 25% vacancies. mr. president, i ask -- there is a conversation over here that is
8:46 pm 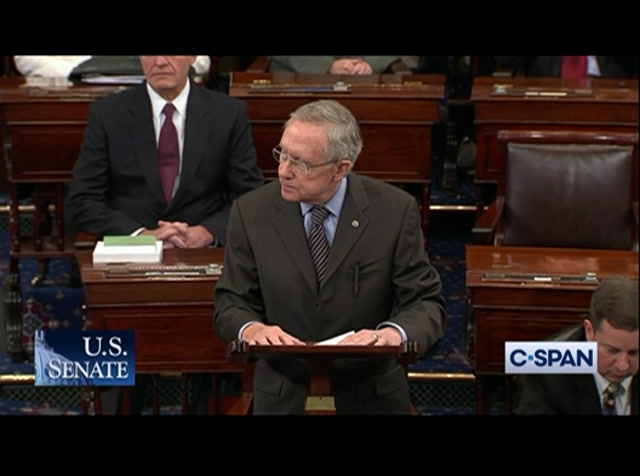 quite distracting. >> the senate will be in order. the senator has the right to be heard. >> mr. president, there is not a single legitimate objection to the qualification of any of these. a simple yes or no vote. republicans simply don't want president obama to make any appointments at all. none, zero. further, only 23 district court nominations have been filibustered in the entire history of our country, 23. 20 of them have been in the last four and a half years. 230 plus years. three in the last four and half years, 20. that is not fair.
8:47 pm 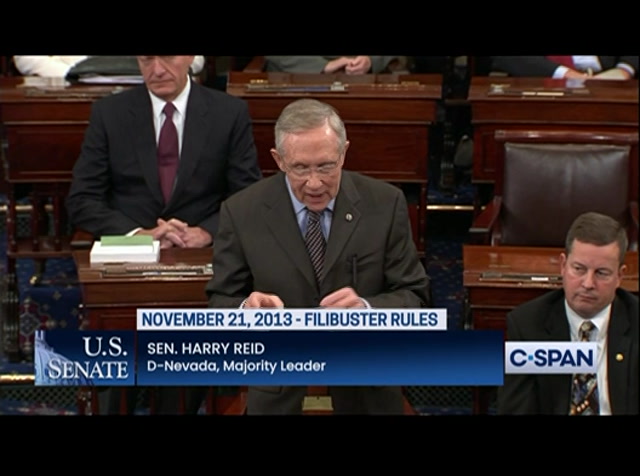 one out of every 10 federal judgeships are vacant. courts are being denied the justice they rightly deserve. more than half of the nation's population lives in parts of the country that have been declared a judicial emergency. no one has worked harder than the presiding officer to move judges. no one knows the problem more than the presiding officer. the american people are fed up with this kind of obstruction and gridlock. the american people, democrats, republicans, independents, are fed up with this gridlock and obstruction. the american people want washington to work for american families once again.
8:48 pm 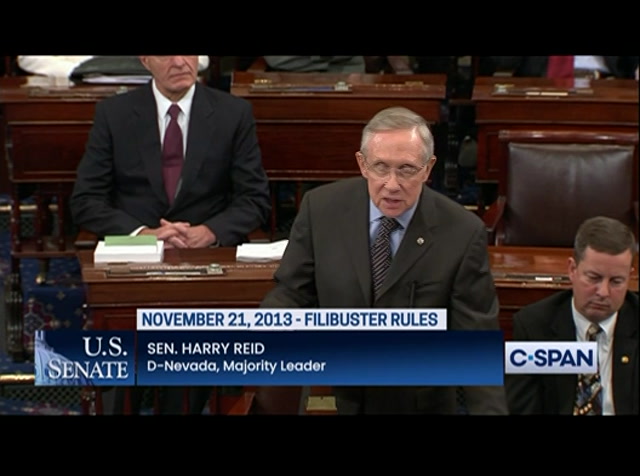 i am on their side, which is why i propose an important change to the rules in the united states senate. the present republican leader himself said, and this is a direct quote, "the senate has repeatedly changed its rules as circumstances dictate." . he's right. in fact, the senate has changed its rules 18 times by sustaining or overturning the ruling of the presiding officer in the last 36 years. the change we propose today would insure executive and judicial nominations an up or down vote on confirmation. yes, no. change will make culture for all nominations beside the supreme court in majority threshold vote, yes or no. the senate is a living thing. to survive, it must change as it
8:49 pm 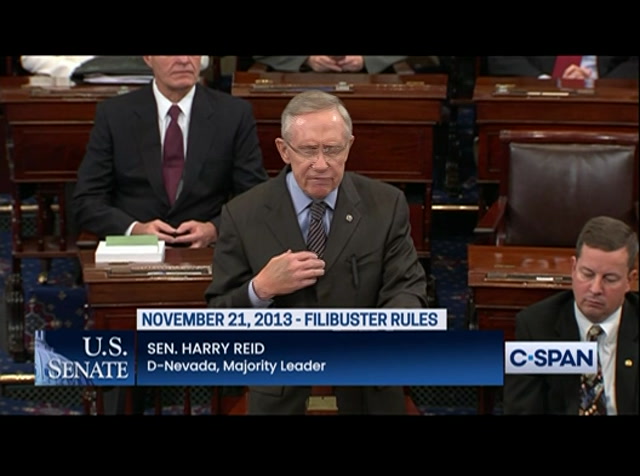 has over the history of this great country. adapting the rules to make the senate network again is just common sense. this is not about democrats versus republicans. this is about making washington work regardless of who is in the white house or who controls the senate. to remain relevant and effective as an institution, the senate must evolve to meet the challenges of this modern era. i have no doubt to my republican colleagues will argue that the fault is ours, the democrats fall. i can say from experience that no one's hands are entirely clean on this issue. but today, the important distinction is not between democrats and republicans. it is between those who are willing to break the gridlock in washington and those who defend the status quo. is the senate working now? can anyone say the senate is working now? i don't think so.
8:50 pm 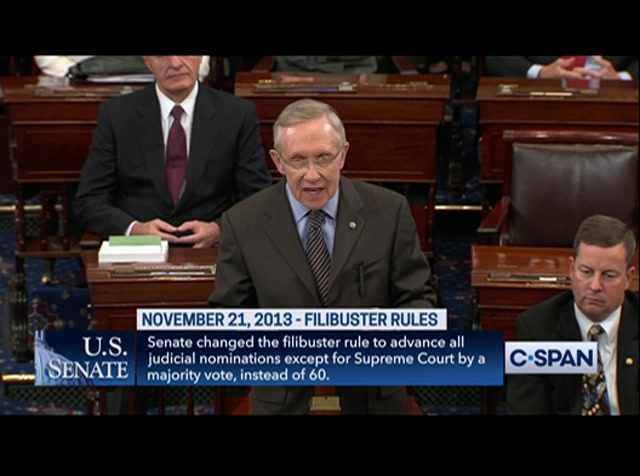 today, democrats and independents are saying enough is enough. change the rule regarding presidential nominees will apply equally to both parties. when republicans are in power, the changes will apply to them just as well. that is simple fairness. and it is something both sides should be willing to live with. that is simple fairness. sen. mcconnell: over the past several weeks, the merc people have been witness to one of the most breathtaking indictments of big government liberalism and memory. and i am not just talking about a website. i am talking about the way in which obamacare was forced on the public by an administration and a democratic led congress that we now know is willing to do and say anything, anything to pass the law. the president and his democratic allies were so determined to force their vision of healthcare on the public that they assured
left
right
Borrow Program
tv