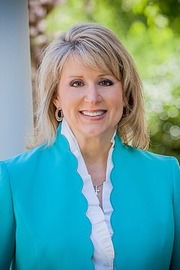 This feminist voted to cut veterans benefits and to gut the military budget. She sponsored a tax increase in the radical E.R.A and voted to let homosexuals pretend they're married. She's a RINO who voted to fund Obamacare and to raise the debt ceiling twice to pay for abortions in D.C. and to fund Planned Butcherhood. She's pro-amnesty and voted to let convicted alien child molesters stay in America. And you know, as a Republican you can be a RINO. RINO. RINO. I'm Kay Daly and this is my...
Topics: Voting Record, Federal Budget, Veterans, Military, Taxes, Gays and Lesbians, Health Care, Debt,...
Source: https://www.youtube.com/watch?v=P-Br1GxdGJo

Those who say women don't know how to fight have clearly never fought Renee Ellmers. She fights for our conservative values and she fights hard. Right-to-life, smaller government, less spending, a strong national defense. Taking on Obama or her own party's leadership, Renee Ellmers is a powerful conservative who is fighting for us. I'm Renee Ellmers and I approved this message.
Topics: Abortion, Federal Budget, Candidate Biography, Military, Renee Ellmers for Congress, Renee Ellmers,...
Source: https://www.youtube.com/watch?v=D67vg75TV6w

Congresswoman Renee Ellmers. She seems nice enough, but in just five years, she's become part of the problem in Washington. Ellmers voted to increase our national debt by trillions. She voted for massive corporate giveaways. She even fleeced us by wasting our money on projects like the sheep industry improvement center in Maine. Renee Ellmers. Way too liberal for North Carolina. Club for Growth action is responsible for the content of this advertising.
Topics: Debt, Economy, Club for Growth Action, Renee Ellmers, NORTH CAROLINA, WASHINGTON, MAINE, renee,...
Source: https://www.youtube.com/watch?v=siRbuNZ942E

Renee Ellmers promised to cut wasteful spending but she became part of the Washington problem, voting for billions in more spending and special-interest deals. We deserve a conservative we can trust. It's time for someone else.
Topics: Federal Budget, Candidate Biography, Americans for Prosperity, Renee Ellmers, WASHINGTON, ellmers,...
Source: https://www.youtube.com/watch?v=FYCv-30zj-Q