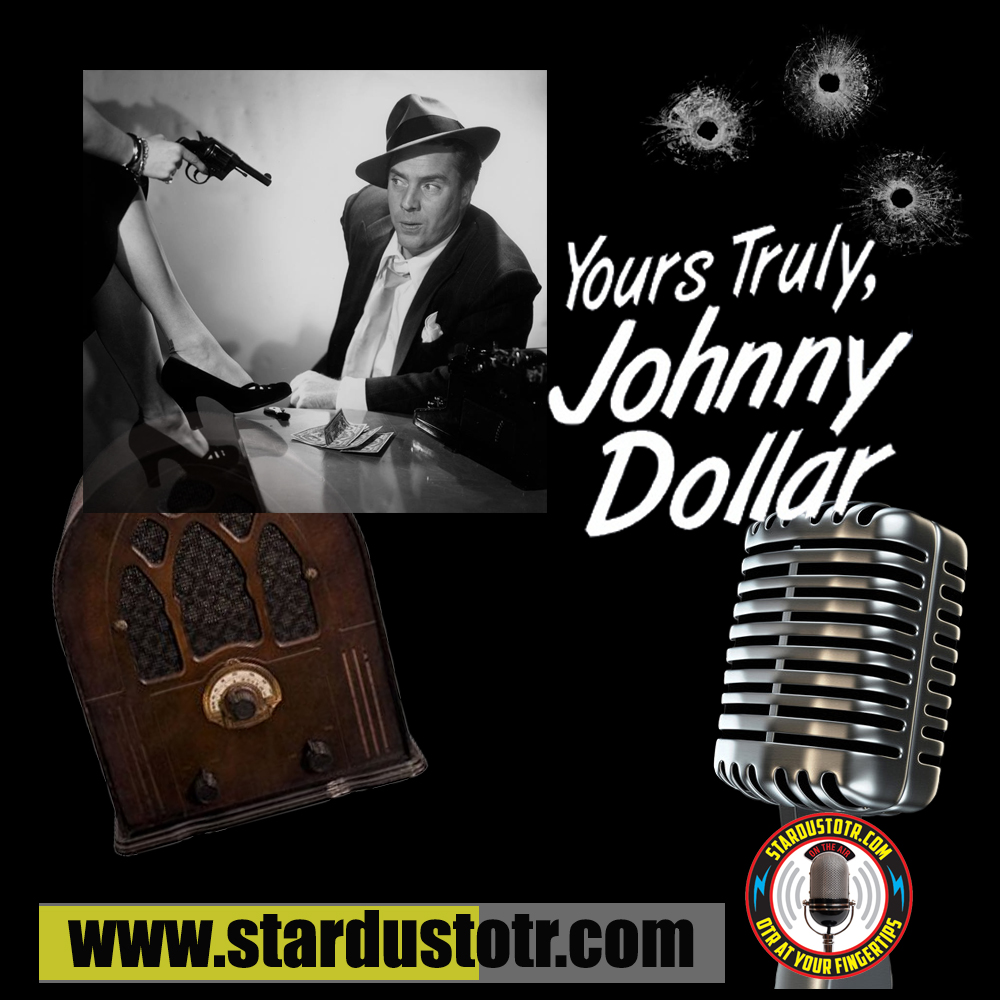 "The freelance investigator with the action-packed expense account ..."
Yours Truly, Johnny Dollar was one of the longest running radio detective shows, with 14 years of intrigue and adventure. It was well received and became one of the last drama on the air when radio interests waned in the 1960s.
Johnny Dollar worked for the Universal Adjustment Bureau, flying from Mexico to swamps to California ghost towns. He would recover furs and diamonds for a cut of the goods, bodyguard wealthy men, and climb into the deathly Skull Canyon. All stories included mystery and murder, slipping listeners to the edge of their seats with teeth a clicking on the fingernails.
Like most fictional private eyes, Johnny Dollar had a well developed personal sense of right and wrong, but "right" usually aligned itself with the interests of his insurance company clients. Not that he ever had a problem working in as many creative elements as he could into the expense account.
Johnny narrated the shows as if they were expense accounts sent to his employer. A clever way of narration, it always began, "expense account, item one," with him telling about cab fare, then went on through the air fare, his trip across the country, and so on through the adventure. At the end of the show, he would finish his expense report and sign it, "Yours Truly, Johnny Dollar." Nothing was too small for the account, including a nickel for aspirin or the two cents that Johnny felt like if he followed a wrong lead.
The basic premise remained the same throughout the run, although writers and actors changed through the years. One of the "best Johnny Dollars" was Bob Bailey from 1955 through 1960. At the beginning of Bailey's tenure, radio serial veteran Jack Johnstone produced and directed the program.
For a little over a year (beginning in October 1955 [Vol 4]), the series aired as a fifteen minute serial and was broadcast five times a week. Although these would seem to be shorter programs, the 15 minute format allowed for week long story arcs. Writers now had 75 minutes of storytelling time to work with, and the result was some of the best drama from the golden age of radio. It later returned to half hour shows.
Yours Truly Johnny Dollar aired for the last time on September 30, 1962, just after the final episode of Suspense. This was the last broadcast of the Golden Age Of Radio.
----> Synopsis and description use from otrcat.com
https://www.otrcat.com/p/johnny-dollar-yours-truly-johnny-dollar