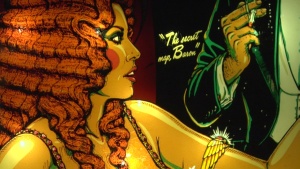 Footage shot in support of the ARCADE documentary by Jason Scott. Shot between 2012-2015 in various locations around the world, mostly the United States.

From Wikipedia: The Musée Mécanique (English: Mechanical Museum) is a for-profit interactive museum consisting of 20th-century penny arcade games and artifacts located at Fisherman's Wharf in San Francisco, California. The museum owns over 300 mechanical machines, and is one of the largest privately owned collection of such games in the world. Owner Ed Zelinsky began collecting at age 11 and his games were exhibited in the 1920s at Playland. In 1972 Playland closed and Musée Mécanique...

Jason says "A number of B-Roll shots of the 1UP Arcade in Denver (now since expanded with other locations) that combines a bar and arcade, a concept that has only increased in the years since. Shots were meant to show the connection of alcohol/bar culture and video games, and this direction things were taken."

Jason Says: "I got a tip from Robb that there was a collector of videogames and other entertainment devices named The Wolfman, who would be an interesting character to interview if I was in town. When I came in to talk with other Denver-area collectors, I got time with The Wolfman, who was recovering from some medical conditions, but who sat for the interview gladly and gave really good answers. He has incredibly unusual items, some of them first of their kind, but his attitude about it...

ARCADE Documentary Clip Collection. Jason says "This is a set of cut, re-rendered, and described clips from a number of interviews conducted for the ARCADE documentary. It is neither every possible clip nor a completion of the work. In the process of making a film, I take each interview, listen to the speaking or watch what is on screen, and describe portions, rendering them out losslessly as described moments. When I am finished doing this with all the relevant interviews, I begin finding...

Jason says: "An interview with the owner of the Rusty Quarters Arcade in Minneapolis, a classic video arcade, talking about his goals and ideas of the experience, along with lots of B-Roll of kids playing games. Sadly, the arcade closed soon after (and quickly)."

Interview with the shop owners of SAVE POINT, a video game arcade and game store in Maryland. (This store since closed, re-opened as two different stores run by two different previous collaborating owners, and closed again). Interviews were conducted regarding a whole range of subjects, from the administration of shop through to arcade distribution in general.

Jason says: "FREE GOLD WATCH is a modern (as of this documentary) arcade located in a T-shirt printing shop in Haight-Ashbury, San Francisco. They do T-shirt printing but also, over time, have amassed a huge amount of video games and pinball machines. They host pinball tournaments and are open on evenings. I asked to do some filming and it happened to be during the Halloween event, so people are not just playing, but playing in costume, adding an odd feeling to the recording. I worked to...

Interview with Allan Alcorn of Atari, interviewed by Jason Scott in 2015. Audio-only interview, meant to be overload on various Arcade footage for the documentary. Covered a variety of subjects related to the places of arcades.
favoritefavoritefavorite ( 1 reviews )

Jason says: "B-Roll Footage shot at Reciprocal Skateboards in New York City, located at  402 11th Avenue. (It has since closed). The shop was skirting around a general ban on video game arcades in NYC by not charging for the games. The owner was very kind and let me just record whatever I wanted to while he ran the store. I was intending to go back and ask about the relationship to the games but I got busy, and the store then closed. It's now a deli."

DESCRIPTION
Footage shot in support of the ARCADE documentary by Jason Scott. Shot between 2012-2015 in various locations around the world, mostly the United States.
ACTIVITY