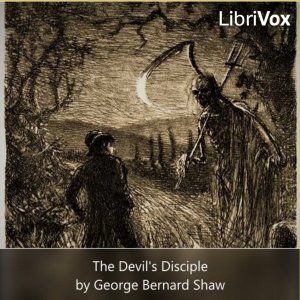 LibriVox recording of The Devil's Disciple by George Bernard Shaw.
Read in English by LibriVox Volunteers
Set during the American Revolution. Richard Dudgeon, put off by the dour religious ferocity of his mother and many of his neighbors, declares himself to be the devil's disciple, befriends the town's disreputable characters, repulses minister Anthony Anderson's dutiful attempts to save his soul, and takes a certain grim satisfaction in the shocked disapproval of his neighbors, including Anderson's young wife Judith. But when the British Army under General Burgoyne approaches, seeking prominent rebels, of whom to make examples, Richard, Anthony, and Judith are faced with a crisis that knocks them all loose from their comfortable roles. Rudeness, repartee, role reversal, irony, heroics, and excessive authorial commentary abound. - Summary by Joanna Michal Hoyt

For further information, including links to online text, reader information, RSS feeds, CD cover or other formats (if available), please go to the LibriVox catalog page for this recording.

For more free audio books or to become a volunteer reader, visit librivox.org.

Reviewer: AnitaJ - favoritefavoritefavoritefavoritefavorite - November 9, 2021
Subject: Very entertaining!
I tried listening to a dramatic reading of an Oz book many years ago but was put off by the constant switching of voices to say "he said" or "she said" and have avoided them ever since. I decided to give this one a listen as I remembered how much I loved the Burt Lancaster/Kirk Douglas movie.

The dramatic reading of a play is so much better and I enjoyed this very much! I've had the pleasure of being familiar with some of the voices like Todd HW and Jenn Broda and now I have new voices to be entertained by! This whole ensemble was so good. Had me laughing out loud. I had misgivings when I saw that a female did the part of Richard. She did a great job!

I look forward to discovering more from these talented volunteers!

Uploaded by librivoxbooks on October 30, 2021