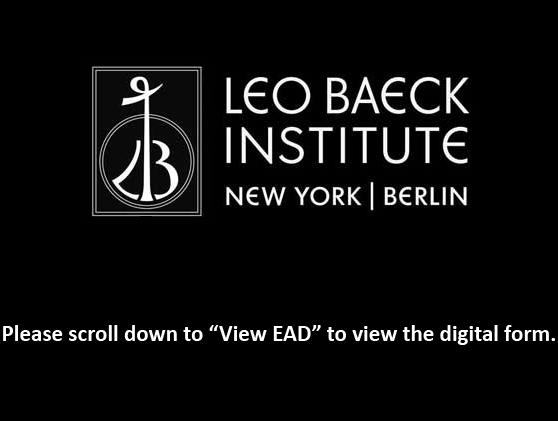 The papers of George L. Mosse provide a significant amount of information on the work and life of a historian of the origins of fascism and Nazism, Jewish history and German-Jewish cultural coexistence, George L. Mosse (1918-1999). The most valuable part of the collection is the correspondence of George L. Mosse. It contains both letters he received and copies of those he sent. The correspondence (Series III) with publishers documents various stages of creation of his books, while his personal correspondence with friends and colleagues reveals his thoughts on many historiographical issues, as well as insights into the academic life of a distinguished scholar and devoted educator

Another significant resource documenting George L. Mosses academic pursuits are drafts and manuscripts of his books, articles, and lectures. These are preserved together with research notes and index cards George L. Mosse used for his research (Series II). This kind of material can help in understanding George L. Mosse research methods and techniques. George L. Mosse together with Walter Lacquer edited the Journal for Contemporary History and this collection contains its editorial correspondence and drafts of articles both accepted and rejected spanning almost forty years of its existence from 1961 to 1998 (Series III). This part of the collection captures important trends and developments in scholarship on the history of the twentieth century, and particularly on the origins of fascism and Nazism. The historiographical shifts are also reflected in the vast collection of off-prints that George L. Mosse accumulated throughout his long career

The collection includes some material on the Mosse family, however, personal correspondence with family members and artifacts that would have strong ties to individual family members are rather rare. Some information on George L. Mosses family can be found in correspondence he had with various scholars interested in the history of this family

George L. Mosse was born Gerhard Lachmann-Mosse in Berlin on September 20, 1918 to a well-to-do Jewish family. His grandfather Rudolf Mosse founded the Mosse Publishing House, and published the major liberal newspaper in Germany the Berliner Tageblatt, as well as the Berliner Morgenzeitung, Volkszeitung, and the 8-Uhr Abendblatt. Rudolf Mosse was a pioneer in the business of modern international advertising, and owned several advertisement companies in Europe. George L. Mosses father, Hans Lachmann, married Felicia Mosse, the only daughter of Rudolf Mosse. They had three children, Rudolf, Hilde and Gerhard (George), who was the youngest. After the death of Rudolf Mosse in 1922 Hans Lachmann-Mosse took over the firm. The Mosse family owned several estates, one of which was Schenkendorf, the family country residence that had a particular significance for George L. Mosse, who often recalled happy childhood memories of time spent at Schenkendorf. The Mosse publishing enterprise was one of the earliest targets of Nazi political harassment both before and after the Nazis came to power in 1933. The family left Germany the day after Hitler was appointed Chancellor, although George L. Mosse, away at school in southern Germany, did not leave until March 31, 1933. The family advertising enterprises located outside Germany-particularly in Switzerland-provided some financial means in their exile

The educational career of George L. Mosse started at the boarding school Schule Schloß Salem near the Bodensee (Lake Constance), continued in 1934 at the Quaker Bootham school in York, England and in the years 1937-1939 at Cambridge. After George L. Mosse immigrated to the United States in 1939, he attended Haverford College, a Quaker college in Pennsylvania, and received his B.A. degree from the hands of the former president Herbert Hoover at Haverford in 1941. He then pursued his interest in English Protestant history at Harvard, where he studied with the medievalist Charles Howard McIlwain and received the PhD degree in 1946. His dissertation dealt with the struggle for sovereignty between king and Parliament in the early seventeenth century and was published under the title The struggle for sovereignty in England, from the reign of Queen Elizabeth to the Petition of Right in 1950

In 1944 George L. Mosse joined the Army Specialized Training Program at the State University of Iowa where he lectured for soldiers who were scheduled to take part in the post-war U.S. occupation of Europe. A year later he became a member of the History Department faculty and was assigned to a newly established core course on the history of Western civilization, established just in time for the return of large numbers of veterans from WWII. He became a keen proponent and public advocate of this program and several times publicly defended its importance in the press. He was instrumental in developing its curriculum and helped its implementation at other institutions of higher education. His lectures were well attended and George L. Mosse became a popular teacher and in demand speaker in Iowa and the Midwest

In 1955 George L. Mosse left the State University of Iowa to take a position as associate professor of European history at the University of Wisconsin-Madison where he was recruited to build up the European history program. He served on the faculty until his retirement in 1988, first as the first Bascom Professor of European History, and later as the Bascom Weinstein Professor of History and Jewish Studies. In addition, George L. Mosse taught at The Hebrew University in Jerusalem from 1969 to 1985, and held the Koebner Chair between the years 1978 and 1985. Among many other appointments and honors he received in his retirement years was appointment to the A.D. White Professorship-at-Large at Cornell University

Lecturing and contact with students were very important to George L. Mosse and he traveled and lectured extensively within the United States and abroad from Poland to Australia to South Africa and often in Germany where he embraced the new liberal democratic regime. He enjoyed particular popularity in Italy, where he gave many lectures, interviews to popular magazines, and attended many conferences. George L. Mosse held several visiting professorships, including: Stanford University (1963-1964); Hebrew University (1969-1985); Kaplan Center for Jewish Research, Capetown University (1980); University of Amsterdam (1980); Ecole des Hautes Études, Paris (1986); Cambridge University (1990-1994). In 1994 he was the first Shapiro Senior Scholar in Residence at the Holocaust Memorial Museum in Washington, D.C

While George L. Mosses early scholarship focused on the study of English constitutional history, Puritanism, and the Reformation, after his arrival at the University of Wisconsin his interest shifted towards modern German history and the history of Anti-Semitism. In 1964 George L. Mosses seminal volume The Crisis of German Ideology: Intellectual Origins of the Third Reich was published. This work gave a new perspective on the study of the genesis of Nazism and right-wing movements in general. This book was followed by several others that challenged the conventional approaches to the origins of Nazism and fascism: Nazi Culture (1966), The Nationalization of the Masses (1975), and Toward the Final Solution (1977). His Fallen Soldiers investigated the cult of the war dead in Western Europe during and after the First World War. He was also interested in the history of German-Jewish relations and cultural co-habitation. Anson Rabinbach in his obituary in Aufbau (February 19, 1999) characterized George L. Mosses German Jews beyond Judaism as his most personal book

George L. Mosse always paid close attention to popular culture, behaviors and mentalities within a broader European cultural landscape. This became even more apparent when his focus shifted once again. In the 1980s George L. Mosse analyzed the concepts and perceptions of beauty, sexuality, and policies of public and social hygiene, in particular the political implications of perceived deviations from the norms of nineteenth century middle class society. His research resulted in two books, Nationalism and Sexuality (1985) and The Image of Man (1996)

George L. Mosse authored more than twenty-five books, including his autobiography Confronting History (2000). He published a great number of articles in academic journals and contributed to many volumes of essays. He was also a founding editor of the influential Journal of Contemporary History together with Walter Lacquer

The academic achievements of George L. Mosse were recognized by five honorary doctorates: Doctor of Literature (Litt.D.) from Carthage College (1973); Hebrew Union College Jewish Institute of Religion (1987); Doctor of Philosophy honoris causa from Università degli Studi di Camerino (1995); Universität-Gesamthochschule-Siegen (1998); and the Hebrew University of Jerusalem (1999). He was also awarded the Award for Scholarly Distinction of the American Historical Association, the Leo Baeck Medal, the Premio Aqui Storia, the Premio Prezzolini, and the Goethe Institutes Goethe-Medaille

After the war the Mosse family attempted to recover their German property, and in the 1950s, they were successful in obtaining restitution of Mosse family properties located in the western sector. However, since most of the real estate was located in the Soviet occupied zone - later the German Democratic Republic - their efforts were only partially successful. When the Berlin Wall fell in 1989 and conditions for the restitution of family properties became more favorable, George L. Mosse was the only living direct heir of the family, although he shared equally restitution with the heirs of his brother Rudolf and the foundation set up to honor his sister Hilde. The family was restituted the Schenkendorf estate (which had served after the war as a military base) as well as other properties, and George Mosse attended the dedication of the Mosse media center in the building that formerly housed the offices of the Mosse Publishing House

The following families are mentioned in this collection: Olschki family; Mosse family