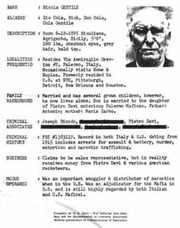 Various uploads thought to be best placed in the NSIA collection.

This is a copy of FBI files shared with the Church Committee , which were recently declassified and released in compliance with the JFK Records Act . The file name is "SENSTUDY 75", number 62-116395.  These particular copies were originally released online  by the National Archives, but have been renamed by serial number for this collection.
Topics: Federal Bureau of Investigation (FBI), Central Intelligence Agency (CIA), intelligence,...

Nikola Tesla  Unquestionably the gratest scientific genius of the age. I have invested a significant amout of time and effort in acquiring this collection. Consisting of each and every document, note and paper Nikola ever put thought in or pen to paper. Well admittedly not all his militarily confiscated work is available to the public *(BULLSHIT) Included here are at least his scientific paper abstracts provided by the CIA's - CREST Electronic Reading Room - as well as bulk dumps of files here...
favoritefavoritefavoritefavoritefavorite ( 2 reviews )
Topics: Nikola, Nichola, Nickola, Tesla, Antigravity, nonlinear, latitudinal, scalar, electromagnetic,...

The Sword and the Shield  is based on one of the most extraordinary intelligence coups of recent times: a secret archive of top-level KGB documents smuggled out of the Soviet Union which the FBI has described, after close examination, as the "most complete and extensive intelligence ever received from any source." Its presence in the West represents a catastrophic hemorrhage of the KGB's secrets and reveals for the first time the full extent of its worldwide network.Vasili Mitrokhin,...
Topics: KGB, Mitrokhin Archive

Unsorted NSIA Contributions
The World Was Going Our Way: The KGB and the Battle for the the Third World
by Christopher Andrew
texts

In 1992, Vasili Mitrokhin, a former KGB archivist, snuck out of Russia carrying with him a vast cache of transcriptions of top-secret KGB intelligence files. The FBI later described his trove of documents as “the most complete and extensive intelligence ever achieved from any source.” Renowned historian Christopher Andrew had exclusive access to both Mitrokhin and his archive. In 1999, they published the explosive bestseller  The Sword and the Shield , which provided a complete account of...
favoritefavoritefavoritefavorite ( 2 reviews )
Topics: KGB, Mitrkohin, Mitrkohin Archive

Cestui Que Vie Trusts are the means by which we "finance the Sovereignty of Nations". They are trusts held by a third party and without notification to the entity of the trusts name. They invest, make profits and retain all returns. A number of quite rare documents are found here as this is an exceedingly well gaurded secret of the fiat monetary system. Further encased by a disinformation campaign framing the idea itself as a conspiracy theory. Most security dealers today are not...
Topics: Cestui Que Vie, Sovereignty, Lee Joseph Common, SWUS, Sovereign Wealth US, Inter-generational,...

Stuxnet is believed to be a jointly built American-Israeli cyber weapon and computer worm. These claims have never been confirmed by either nation state. According to anonymous US officials speaking to the Washington Post, the worm was developed during the administration of George W. Bush to sabotage Iran’s nuclear program with what would seem like a long series of unfortunate accidents. Stuxnet has three modules: a  worm  that executes all routines related to the main payload of the...
favoritefavoritefavoritefavoritefavorite ( 1 reviews )
Topics: Stuxnet, Iran, malware, code, reverse engineer

This page once contained a copy of video of the beating of Rodney King in 1991, released in 2015 by the U.S. Federal Bureau of Investigation (FBI) online here: http://vault.fbi.gov/rodney-king/video/rodney-king-video The file has been removed from this page at the request of the copyright holder, George Holliday, who may be contacted via this web site: www.rodneykingvideo.com
Topics: Federal Bureau of Investigation (FBI), Rodney King, Los Angeles, Video

The plans, technology and forecast for 2025 COLLECTIVELY result in real and significant concern. As a species humanity must better develope the collectively subconscous awareness or otherwise as people become cognizant & or sentient regarding the higher self. For while few if any are capable of predicting with certainty the cause... Defence Intelligence Contractors (putting payloads in orbit for the DoD) forecast a 70% loss in total U.S. Population by 2025. True this alone may be...
Topic: 2025, lSWUS, Lee Joseph Common, Sovereign Wealth US, Army, Navy, Air Force, Coast Gaurd, Space,...

The highest-ranking Soviet bloc intelligence official ever to defect to the West, Lt. Gen. Ion Mihai Pacepa is at it again.A quarter century ago, in his international bestseller Red Horizons, Pacepa exposed the massive crimes and corruption of his former boss, Romanian President Nicolae Ceausescu, giving the dictator a nervous breakdown and inspiring him to send assassination squads to the U.S. to find his former spy chief and kill him. They failed. On Christmas Day 1989, Ceausescu was executed...
Topics: Disinfo, Disinformation

Nearly 300,000 text messages from the Manafort family. Previously available only through the dark web, the database has been passed around some circles for several years. News outlets have examined the database and reported on parts of it - including things that incriminate Paul Manafort in criminal activity - but the messages remained largely unsearchable. This marks the first searchable transcript and optimized .CSV file of the messages, along with .CSV exports of the database for easier...
Topic: Manafort

My original folder, individually sent to some 20,000 economists, central bankers, governmental officials and others in stations of influence globally. Here is well outlined a way forward towards sustainable markets improving the general welfare and quality of life for all people in both this and the next generation. Addressing economic forecasting methodology, investment in & of the public wealth of nations, intellectual capital valuations, returning intrinsic value to currency,...
Topics: The Shared Vision of Sovereign Wealth US, SWUS, Lee Joseph Common, Defense, Intelligence, economic,...

Unsorted NSIA Contributions
Wedge: From Pearl Harbor to 9/11: How the Secret War between the FBI and CIA Has Endangered National Security
by Mark Riebling
texts

This is a collection of U.S. Federal Bureau of Investigation (FBI) files on "Communist Activities in the Philippine Islands." The files cover both the activities of communists in the Philippines as well as their travels in the United States.  The files include:  Main FBI Headquarters file: 64-HQ-200-Subfile239: 20 sections and 5 Enclosures Behind Files (EBFs), roughly 1150 pages Manila Legal Attache (LEGAT) file: 105-MAN-88, including documents declassified by the FBI, Navy, Defense...
Topics: Communism, Anticommunism, Philippines, Filipinos, Filipino, Federal Bureau of Investigation (FBI),...

This is a collection of declassified documents on Muhammad Ali first released by the U.S. Federal Bureau of Investigation (FBI) online here on Nov. 22, 2016:  https://vault.fbi.gov/muhammad-ali However, whereas the original release by the FBI was a disorganized jumble, these documents have been reorganized by file number. This is not by any means a complete collection of FBI documents on Ali. It contains only a few serials from the main FBI file on Ali, file 100-HQ-436351. The FBI may still...
Topics: Muhammad Ali, Cassius Clay, Louisville, Kentucky, Federal Bureau of Investigation (FBI),...

This is a collection of U.S. Federal Bureau of Investigation (FBI) documents related to the comedian Richard "Dick" Claxton Gregory . The documents were declassified in 2014-15. The FBI released the documents to the general public on its web site on August 30, 2017, not long after Gregory's passing on August 19.  Unlike the files released on the FBI's web site, this collection is separated into different files, with each digital file named after the corresponding FBI file number....
Topics: Richard Gregory, Dick Gregory, Richard "Dick" Claxton Gregory, Federal Bureau of...

Part of NIST's 9/11 vault, released through the FOIA to the International Center for 9/11 Studies and then donated to the National Security Internet Archive and its sister archives for video and audio.
Topic: 11-Sep

DESCRIPTION
Various uploads thought to be best placed in the NSIA collection.
ACTIVITY