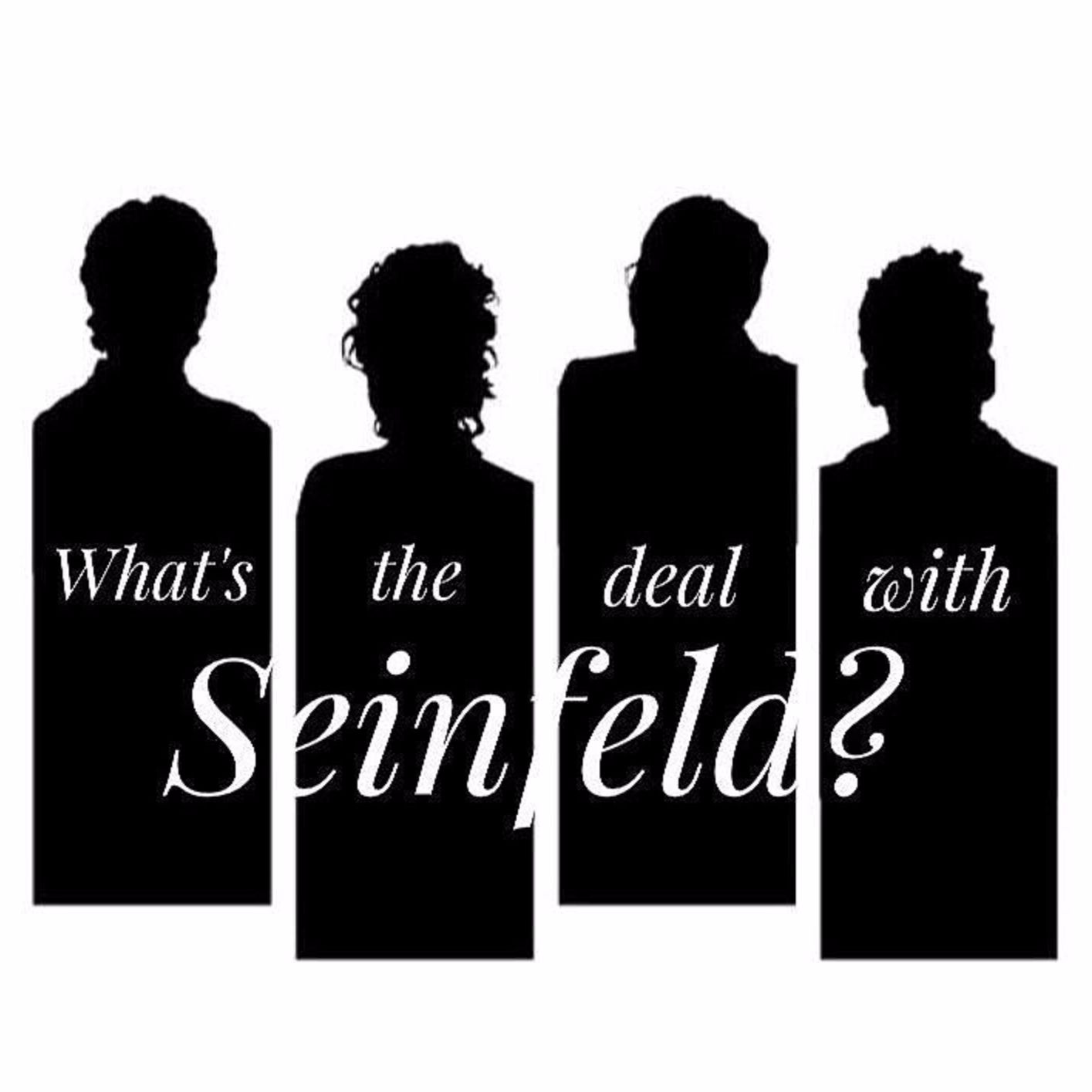 What's The Deal With Seinfeld?

Elaine gets the gang to volunteer at an old folks' home. She gets freaked out by hers, George gets fired by his guy, and Jerry loses his. Kramer and Newman scheme to sell records to a vintage music store and steal the records from Jerry's old guy. (BONUS EPISODE) Guest: “Tommy T” Gobena

What's The Deal With Seinfeld?
Episode 56 "The Outing" w/ Landon Letzkus
May 7, 2018 by Twice weekly podcast by Chris Milner
audio

A prank by Elaine leads a newspaper journalist to think that Jerry and George are gay. Guest: Landon Letzkus

Elaine can’t seem to figure out why her shoes are a subject of conversation. Jerry and George pitch their pilot to NBC, but the deal is nearly jinxed when George takes a peek at the cleavage of the NBC president's daughter. Guest: Landon Letzkus

George meets an attractive lawyer, Cheryl, who is impressed by his sense of humor. George attempts to keep Elaine and Jerry from meeting Cheryl, believing that Jerry's sense of humor will eclipse him. Babu Bhatt, the former restaurant owner who Jerry helped drive out of business in "The Cafe" (Season 3), has trouble with the INS because Babu's visa renewal was accidentally delivered to Jerry. Guest: Rob Maher

Elaine is mortified when she accidentally reveals a bit too much Decolletage on her Christmas card, which she has sent out to everyone she knows. (BONUS EPISODE) Guest: Josh Kuderna

Jerry does a set at a comedy club, then goes to meet George, Elaine, and Kramer afterward to see a screening of Checkmate. However, a simple miscommunication causes the four to keep missing each other at two different theaters. Guest: Rob Maher

Jerry and Elaine fly back to New York. Jerry travels on first class while Elaine on coach. George and Kramer run into trouble while trying to arrive on time to pick up Jerry and Elaine at the airport. Guest: Mike Finazzo

George's mother throws her back out when she falls down after catching George performing a personal act; the gang partakes in a contest of self-denial. Guest: Tanael Joachim

Jerry finds out his girlfriend is still a virgin; George wants to end his relationship with Susan to exploit his writing profession as a pick-up line. Guest: Donnie Sengstack

Jerry offends Elaine's assistant. Kramer makes a contact for Cuban cigars. A box of letters from John Cheever is all that remains after Susan's father's cabin burns down. (BONUS EPISODE) Guest: Mike Recine

On their way to the family cabin, George and Susan visit a boy who lives in a bubble; Kramer and Naomi start a fire that ends up burning down the cabin. Guest: Stavros Halkias

Jerry tries to buy his watch back from Uncle Leo, who found it in the garbage, having been thrown there by Jerry. George tries to resurrect the fledgling NBC deal, while Elaine plans a break up from her psychotherapist with Kramer's help. Guest: Josh Gondelman

Jerry is asked to explain to his parents why he does not wear the watch they gave him. Morty Seinfeld thinks his wallet has been stolen from him at his doctor's appointment. (BONUS EPISODE) Guest: Jak Knight

Newman uses Kramer as his witness when the former refuses to pay for a speeding ticket. Guest: Linsay Deming

NBC executives ask Jerry to come up with an idea for a TV series. George decides he can be a sitcom writer and comes up with "nothing." Kramer trades a radar detector for a helmet, and later Newman receives a speeding ticket. Guest: Linsay Deming

Kramer is arrested when he is mistaken for a serial killer. After he is exonerated, Jerry, George, and he return to New York. (BONUS EPISODE) Guest: Natalie McGill

When Jerry is asked to appear on the Tonight Show in Los Angeles, George accompanies him to look for Kramer. Guest: Ahmed Vallejos

Jerry is fed up with Kramer coming into his apartment any time he feels like it and asks him to return his spare set of keys. Kramer begrudgingly complies but then lets it be known that he's leaving for California. As for the others, the one key swap leads to multiple exchanges on pretty well everyone's part. When Jerry forgets his keys, he gets George to let him into Elaine's apartment so he can get his spare set. What they find interests them. Guest: Ahmed Vallejos

Coming from an outing to a flea market in New Jersey, Elaine and George damage Jerry's car when George drives over a large pothole. When they get to his apartment they conveniently find a parking space right in front of Jerry's building. As George tries to back in however, someone tries to take the spot by driving in nose first. With neither car able to park, it leads to an all day argument. Elaine meanwhile has to come with a story about the damage to the car. Guest: Benjy Himmelfarb

Jerry learns that his new artist friend, from whom George has been forced to buy a painting, plagiarized a letter to keep him from breaking up with her. Elaine refuses to remove her Baltimore Orioles cap during a New York Yankees game Guest: Benjy Himmelfarb

Jerry trails a hit-and-run driver but is attracted to her and begins dating her; he later learns her victim was a longtime quarry and dates the latter as well. Kramer begins having seizures whenever he hears Mary Hart's voice. Guest: Matty Litwack

Jerry and George take a limo from a passenger that Jerry knows never made it on the plane, but their false identities land them in hot water. Guest: Matty Litwack

Jerry meets Keith Hernandez and wants to make a good impression, but after being introduced to Elaine, Keith breaks his date with Jerry to make one with her. Guest: David Tveite

Jerry and Elaine fix George up with a friend of hers. Guest: David Tveite

After a suicide attempt by Jerry's neighbor lands him in a coma, Jerry begins a relationship with his girlfriend. George visits a psychic who predicts trouble on his upcoming trip. Elaine agonizes over having to fast before surgery. Guest: David Malitz

Everyone has an uncommon experience while going their separate ways on the subway; Kramer overheard a hot tip on a horse on his way to pay a traffic violation. Guest: Bengt Washburn

George gets a job at Elaine's office and gets involved with the cleaning woman. Elaine's boyfriend is a recovering alcoholic who falls off the wagon because of Jerry's carelessness. George buys Elaine a marked-down cashmere sweater. Guest: Bengt Washburn

Jerry's car is stolen. Elaine dates an older man. Kramer gets a small role in a Woody Allen movie filmed on his and Jerry's block. George must deal with the commotion of the movie filming as he gets a job parking cars on the block. (BONUS EPISODE) Guest: Myq Kaplan

Jerry and Elaine join George for a special party, where they send signals to each other to get out of bad party conversations; George had an office romance. Guest: Ben O’Brien

Jerry dates a vacuous actress and struggles with overcoming his sexual desire for her. George dates a woman with a large nose, who decides to get a nose job after a careless comment from Kramer. Guest: Ben O’Brien

Jerry tries to help a new immigrant restaurant owner across the street from him. George, afraid of embarrassment, asks Elaine to take an IQ test for him. Guest: Andy Kline

The four get stuck in a parking garage for hours when they forget where they parked. (BONUS EPISODE) Guest: Matt Koff

The library asks Jerry about a book he checked out in 1971 and never returned, so Jerry looks up an old girlfriend for his defense against a library cop. Guest: Rob Haze

Jerry is forced to care for the disobedient dog of a man he met on a plane. Guest: Rob Haze

Jerry and Elaine travel to Florida for a dinner in honor of his father. Jerry gets into an argument with a neighbor of his parents over an "astronaut pen." Guest: Elahe Izadi

A bad breakup between George and his girlfriend leads to tax troubles for Jerry. Guest: Elahe Izadi

Physical therapy proves painful for Jerry when his small talk with the therapist leads to a misunderstanding; Jerry uses a dentist note to cover his therapy. Guest: Danny Rouhier

George tries to apologize to a busboy after one of his comments got him fired, but he only makes things worse. Elaine tries to get one of her male friends out of her house. Guest: Danny Rouhier

Jerry, Elaine and George stop for a quick Chinese dinner before seeing "Plan 9 From Outer Space," but circumstances at the eatery make them miss the movie. Guest: Gene Wang

Kramer convinces Jerry to get illegal cable. Elaine holds a baby shower for a former girlfriend of George, on whom he wants revenge for a callous incident. Guest: Gene Wang

Jerry and Elaine believe that they have found a fool-proof way to start having sex again but still remain just friends, but they quickly start encountering problems. Guest: Haywood Turnipseed Jr.

George thinks he suffered a heart attack, only to discover inflamed tonsils instead, and seeks alternative medicine to help him. Guest: Haywood Turnipseed Jr.

George takes revenge on his boss for not hiring him back after he quit and was rude to him, and Jerry and Kramer take revenge on a dry cleaner after Jerry accuses him of stealing $1,500 from his laundry bag. (BONUS EPISODE) Guest: Cerrome Russell

A statue wanted by George is stolen from Jerry's apartment by the boyfriend of a writer Elaine is working with. Guests: John F. O'Donnell & Travis Irvine

When an apartment becomes available in Jerry's building, he helps Elaine get it, only to regret his decision to do so. George starts wearing a wedding ring because he's heard that it helps single guys pick up women. Guests: John F. O’Donnell & Travis Irvine

Jerry wears an expensive jacket when he meets Elaine's father, but an argument ensues when Jerry is reluctant to wear it outside during a snowfall. Guest: John Conroy

Jerry fears that an inappropriate comment he made at a dinner party caused his relative's subsequent death. Guest: Jesse Berney

Archived from iTunes at https://itunes.apple.com/us/podcast/whats-the-deal-with-seinfeld/id1318764418. Items in this collection are restricted.
ACTIVITY

Title
What's The Deal With Seinfeld?