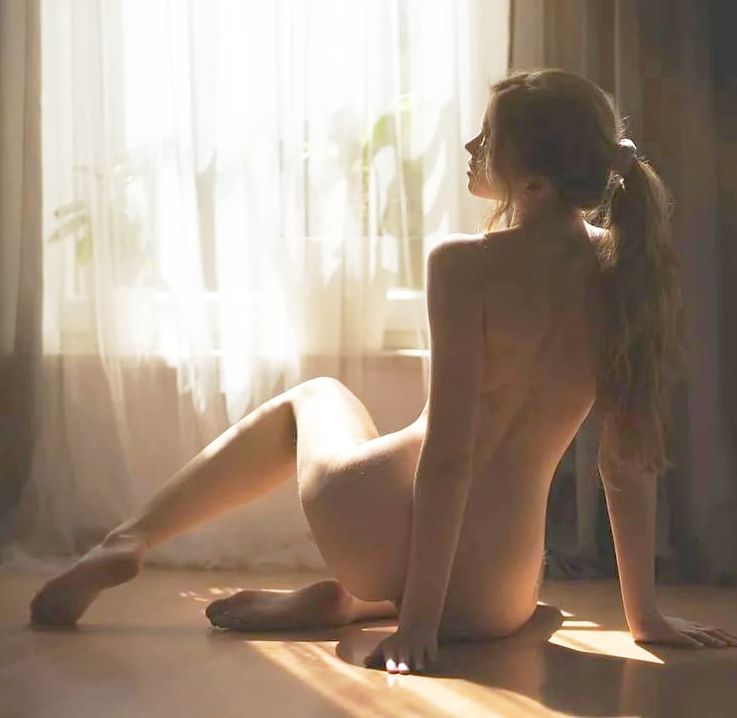 This is a work of fiction. The events described here are imaginary. All are above 18-years-old.

Ron and I met at a retirement event for our favorite teacher, Joe Keene.

I’m a 5-7, average blonde, brown eyes and freckles. Ron is 5 foot 10 with brown hair and green eyes. Folks say I’m shy, but Ron say’s my smile is captivating. while Ron could talk to anyone. His friend Joe suggested that we date, but I wanted friendship to prevent dating "distractions."

I’m was an art major. Ron is a media major.

Later, Ron bumped into me at Nicodel's, a popular Colorado Boulevard lunch spot across the street from P.C.C. Many of us ate there as our campus cafeteria was awful. As in really awful. Nic's had great food, was quiet with red brick and plenty of plants.

When Ron arrived, I was in a, rear, booth, crying. When he asked why, I told him the guy I hired to pose for my final figure project took my $100 and walked out.

"If you need a naked man, and put someone else's face, I could volunteer if you let me take naked pictures of you for my photo class..."

"Seriously?" I said. "Kind of like me posing for Playboy? That is a college girl's fantasy."

"Seriously..." Ron responded. "My SLR is in my car. I just need some 400 film-for natural light. Do you really want to pose nude?"

"I really need this grade... I am not much to look at... Covered with freckles and a hairy bush. I hope I don't scare you away..."

"You won't scare me. I lost my v-card last year and hairy pussies turn me on.."

"I hope you aren't planning sex," I admitted. "I've never even seen a naked guy and still am a virgin.."

We walked to his car, drove to the store-for film, and to my house...

"My mom is on the closing crew-at Sears, so we have about six hours of time..."

Ron dropped me at her door and parked his Camaro on the street... probly not believing I would see me, naked, within the hour... He knocked on the front door, I shouted, "It's unlocked, walk in. I am changing into my bathrobe..."

He walked in, shut the door behind him, and I greeted him in a plush, white, robe... walked him to our family room, turned around and dropped my robe, revealing my natural pine-cone shaped breasts, covered with freckles and a, very, bushy pussy... He couldn't help getting rock-hard, and dropped his jogging shorts and briefs and removed his t-shirt, revealing his plush hairy chest and crotch. This nude project was, quickly, moving forward...

I, quickly, grabbed my sketchpad, then, told him to stand on the end table, and started to draw him as his cock, shrank in his nervousness. I quickly, started drawing, acting as if he & I wern’t nude... I was just another model-to him...

I placed the sketch pad in my lap, covering my bushy pubes. However, my excited nipples pointed directly at him. For the first time, my good friend, was sexually attracting me, causing him to get hard, again. I acted like I didn't seem to mind, just smiled as I sketched.

About an hour, later, I concluded my work, stood up and showed him the final product, having added longer hair and a beard with goatee, to protect his anonymity, walked up, hugged, and French-kissed him, saying, "Thank you for saving my grade."

Ron had me stand next to the curtain, and took a, single, frontal nude, for his side of our deal. He said I was beautiful!

As he laid down on the comforter, on the sofa, I gathered up my nerves and gave into some new aroused passion, and shocked him by placing my pussy above his cock, reached for his manhood, which, quickly, became erect, saying, "We've done everything except make love," kissing him, again, as I slid onto him, popping my cherry, and surrendering my virginity.

"This is fantastic!" I shouted, as we joined, in passion. "I never dreamed sex would be this great!"

He gasped as he entered my warm, wet, hairy, pussy. I was in shock, then, quickly, reacted, as we pumped, together. Soon, we both "came" as Ron shook. Then, I grabbed the, bloody, sheet from the sofa, dumped it in the washer "to destroy the evidence," then led him to the shower "to wash off more evidence." All of our bathing had his cock, rock-hard, though, as we French-kissed under the shower... When he attempted to slide himself into my hairy pussy, I stopped him, saying... "Let's go to my bed. NOW!!!"

Moments later, he was eating my hairy pussy and stroking my breasts as I screamed in ecstasy, "Oh, oh, please don't stop. Your tongue, RIGHT THERE on my clit! Oh my..... OH MY... Uh!" before my first oral orgasm thunderstruck my body into convulsions!!!

He gently held me as I returned from orbit.... As I moaned in pleasure....

"That was so, freaking awesome!" I sighed... "I didn't think I was capable of feeling so great! Can I keep your tongue at my command???"

"I don't give it away, I laughed. Love my tongue, love me... And my tongue comes with a cock, that wants to be inside your bushy pussy! He is turned on by you..." He said....

"You are right," I responded. "Mark saved my art project by posing for me when my model bailed out. Mark is a sweet man from school and I gave him my virginity after his tongue sent my pussy past the milky way... I hope he wants to stick around... I've crushed on him at school and want to share our lives..."

"Thanks for making my girl happy!" Mother said to Ron... "I hope you two used protection..."

As soon as mom left the room, I rolled over and slid his cock into me, doggy-style... We rocked, into a passionate, mutual climax... together...