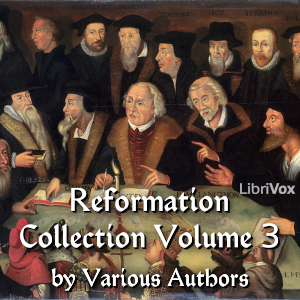 LibriVox recording of The Reformation Collection Volume 3 by Various.
Read in English by InTheDesert
This volume of the Reformation collection, begins with John Calvin's summary of the contents for the Bible from the preface to the Geneva Bible. Catherine Parr, last wife of Henry VIII, contributes her "Prayers or Meditations", intended as a shortened Protestant equivalent to Thomas à Kempis' The Imitation of Christ. Next come accounts of trials and martyrdoms: Walter Mill, the last martyr of Scotland, John Bradford, an anonymous account of Protestants in Norfolk and Suffolk to commissioners sent by Mary I, Hugh Latimer's examination as an old man and the execution of Henry Grey, father of Lady Jane Grey. Following these are a series of prayers: Lady Jane Grey, John Knox, Edward VI as well as Knox's instructions on prayer. Knox also gives instructions for Christian gatherings in a time of persecution and John Wycliffe gives a rule of conduct for Christians in various life circumstances. Tyndale's Prologues covers the gospel of Matthew and, more briefly, John. There follows a selection of Reformation thinking about the relationship between church and state: Thomas Cranmer's sermon during the so-called "Prayer Book Rebellion" (the sermon notes he presumably preached from are included), Luther urging peace during the Peasants' Revolt and Bullinger explaining that civil magistrates have the right to declare and fight wars (contrary to the pacifism of the Anabaptists).Next come treatises on various ethical questions: Peter Martyr's opinion of dancing, Martin Bucer on almsgiving, Wolfgang Musculus on usury. There follow two controversial matters - James Waddell Alexander writes a history of Calvin's involvement in the execution of Michael Servertus and showing that it had the universal support of the age in which he lived, rather than resulting from any personal animosity from Calvin. Then comes a controversial dialogue by Bernardino Ochino, ostensibly arguing against polygamy (Ochino himself appears as one half of the dialogue but makes close to no case against polygamy while his interlocuter is given twice the airtime) but in reality arguing for it, for which Ochino was exiled from Zurich. Calvin's letter to Edward Seymour (Lord Protector of England) comes next which includes his opinion on the Church of England Books of Homilies. Next come a series of resulting from struggles to coexist between Protestants and Roman Catholics (not least on the question of the sacraments), intersperced with a short biography of John Wicklyffe and Oecolampadius' sermon to teenagers, expounding the Apostles' Creed. This volume of the Reformation collection ends with an eyewitness account of the final days of Oecolampadius.

Other volumes of this collection:
Volume 1
Volume 2
For further information, including links to online text, reader information, RSS feeds, CD cover or other formats (if available), please go to the LibriVox catalog page for this recording.

For more free audio books or to become a volunteer reader, visit librivox.org.

Uploaded by librivoxbooks on September 30, 2021