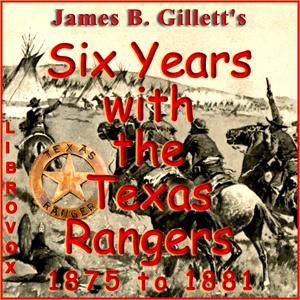 by
James B. Gillett

LibriVox reading of Six Years with the Texas Rangers, 1875 to 1881, by James B. Gillett.
Read in English by Larry Wilson; Stephen R Gagin; Kevin Waters; PQuesoLoco; Jay Randolph; Wayne Cooke; PQuesoLoco; Jay Randolph; andrewframe; andrewframe; Stephen R Gagin; Stephen R Gagin; Wayne Cooke; Tony Posante; jkatula; PQuesoLoco; Alan Dove; Leo David; Kevin Waters; Jay Randolph; Tony Posante; Granville Penn and John.
James Gillet recounts his adventures with the Texas Rangers 1856-1937. In a very entertaining style he recounts personal stories of wars, feuds, battles with the Apache nation and pursuing robbers and murderers. From these stories, and others like them, arose the many legends of courage and daring among the Texas Rangers. “The Texas Rangers, as an organization, dates from the spring of 1836. When the Alamo had fallen before the onslaught of the Mexican troops and the frightful massacre had occurred, General Sam Houston organized among the Texan settlers in the territory a troop of 1600 mounted riflemen. This company, formed for the defense of the Texan borders, was the original Texas Ranger unit. . .” from chapter 2 - Summary by Larry Wilson
For further information, including links to online text, reader information, RSS feeds, CD cover or other formats (if available), please go to the LibriVox catalog page for this recording.
For more free audio books or to become a volunteer reader, visit LibriVox.org.
M4B Audiobook (199MB)

Reviewer: msfry - favoritefavoritefavoritefavoritefavorite - November 25, 2021
Subject: An Educational Little History Book!
This is a very interesting book about a bygone era, where men were were willing to join forces and risk their lives to help defend the lives and properrty of early pioneers. This was before Texas joined the Union, and their foes were mostly native indians raiding, murdering and plundering white settlements. Mexicans across the Rio Grande often appealed to the Texas Rangers for help against vicious attacks by Apache and Comanche Indians, too, as well as other mauraders. It makes one appreciate how far we've come 150 years. I rate this a 5, because it is interesting, well written, well read, and a first hand look into a bygone era.

Uploaded by librivoxbooks on November 14, 2021