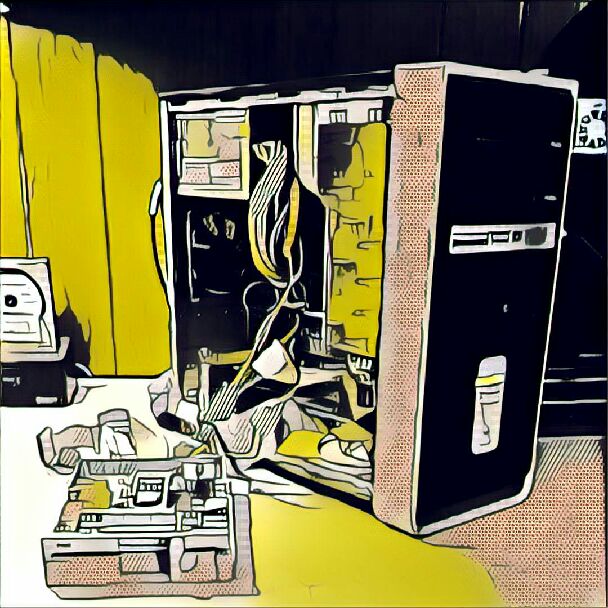 The Internet Archive Software Library is the ultimate software crate-digger's dream: Tens of thousands of playable software titles from multiple computer platforms, allowing instant access to decades of computer history in your browser through the JSMESS emulator.

Atari 800 Emulator. Drag DragThisFileToTheExeApplication.atr to atari800.exe to start the emulator. DO NOT OPEN THE APP. JUST DRAG IT TO THE EXE TO START
Topics: emulator, retro, atari 800

Emulated programs from&nbsp; http://www.doshaven.eu/ “Just because something’s old doesn’t mean you throw it away.” Lt. Commander Geordi La Forge DOS homebrew scene. Does it exist? Are there any new games for DOS? Why we’ve got plenty of new titles for almost every old platform, but just few for good old DOS powered IBM PC? Let’s do something about it. Let’s collect DOS games from 21st century and encourage others to make a new ones. Why would someone make game for DOS...

HyperCard is application software and a programming tool for Apple Macintosh and Apple IIGS computers. It is among the first successful hypermedia systems before the World Wide Web.&nbsp; It combines database abilities with a graphical, flexible, user-modifiable interface. HyperCard also features HyperTalk, a programming language for manipulating data and the user interface. This combination of features – simple form layout, database abilities, and ease of programming – led to...

Aquarius is a home computer designed by Radofin and released by Mattel in 1983. It features a Zilog Z80 microprocessor, a rubber chiclet keyboard, 4K of RAM, and a subset of Microsoft BASIC in ROM. It connects to a television set for audio and visual output, and uses a cassette tape recorder for secondary data storage. A limited number of peripherals, such as a 40-column thermal printer, a 4-color printer/plotter, and a 300 baud modem, were released for the unit. Looking to compete in the...

A collection of .MOOF floppy disk images from the early Macintosh era. .MOOF disk images comprise all the data from a 3.5-inch floppy disk, including the exact bitstream of each track and the physical layout of the tracks on disk. These are not "cracked" copies; all the original code, including on-disk and off-disk protection, is retained. When booted in a compatible emulator, these disk images pass their own on-disk protection checks.

A collection of imaged or scanned items related to pre-release materials for software. Primarily the area of games (because of previews and screenshots related to press) and consisting of ROM images, disc scans and other media. Many of these have significant changes from the final released works.

The Amstrad CPC (short for Colour Personal Computer) is a series of 8-bit home computers produced by Amstrad between 1984 and 1990. It was designed to compete in the mid-1980s home computer market dominated by the Commodore 64 and the Sinclair ZX Spectrum, where it successfully established itself primarily in the United Kingdom, France, Spain, and the German-speaking parts of Europe. The series spawned a total of six distinct models: The CPC464, CPC664, and CPC6128 were highly successful...

The Commodore 64, also known as the C64 or the CBM 64, is an 8-bit home computer introduced in January 1982 by Commodore International (first shown at the Consumer Electronics Show, in Las Vegas, January 7–10, 1982). It has been listed in the Guinness World Records as the highest-selling single computer model of all time, with independent estimates placing the number sold between 10 and 17 million units. Volume production started in early 1982, marketing in August for US$595 (equivalent to...

The Commodore PET (Personal Electronic Transactor) is a line of home/personal computers produced starting in 1977 by Commodore International. A top-seller in the Canadian and United States educational markets, it was the first Personal Computer sold to the public and formed the basis for their entire 8-bit product line, including the Commodore 64. The first model, which was named the PET 2001, was presented to the public at the Winter Consumer Electronics Show in 1977.

This is a collection automatically assembled of items in which the user has indicated they can run the Emularity emulation system. These are not all guaranteed to work.

A collection of emulated software for the early Macintosh computer, created by Apple as the successor to the Apple II series. Simple, powerful and a new path in computing, the Macintosh's graphics-based operating system changed the face of computing permanently.

This is a collection mature or graphic titles from a variety of software library sections, grouped to give viewers a choice in browsing software history as to how graphic they wish screenshots to be.

A cross-platform collection of emulated screensavers, harkening to an era where a Cathode-Ray Tube (CRT) monitor could be subject to "burn in" from a beam buring into the phosphor-covered glass and leave a permanent image. These items provide shifting graphics to ensure this tragedy never happens. (Screensavers continued to be made and sold long after the issue was a problem, because they were enjoyable to look at.)

Windows 3.1x (codenamed Janus) is a series of 16-bit operating systems produced by Microsoft for use on personal computers. The series began with Windows 3.1, which was first sold during April 1992 as a successor to Windows 3.0. Subsequent versions were released between 1992 and 1994 until the series was superseded by Windows 95. During its lifespan, Windows 3.1 introduced several enhancements to the still MS-DOS-based platform, including improved system stability, expanded support for...

Software of the Month Club was a subscription-based shareware delivery service founded in Los Angeles, California in 1979 by Creative Discount Software and incorporated in Carlsbad in 1985. Throughout the 1980s and 1990s, as many 60,000 subscribers received monthly or semi-monthly volumes of the "latest and greatest" software selected from shareware files that had been located online by staffers or submitted to the Club by developers. Volumes were categorized by subject matter...

A collection of emulated chess programs and chess computers from the latter half of the 20th century, reflecting the many different efforts to make computers play chess as well as humans.

The Festival Floppies are a collection of programs from a pile of floppies bought by Josh Miller at the Timonium Hamboree and Computer Festival in 2009. They consist of a large variety of 3.5" floppy disks, including a set of shareware with laser-printed directories on the labels. The pile of floppies were donated to Jason Scott, who has imaged them and has made the contents, where possible, emulated and playable from the browser. These are all from the custom-printed label disks, which...
Topics: Shareware, DOS, Windows

This collection consists of attempts to emulate flash items that run into issues with the Ruffle emulator currently in use at Internet Archive. Ruffle (at https://ruffle.rs) is constantly being updated and improved, so these items will work more effectively over time. Eventually, they will be moved to the regular collection.

Glorious Trainwrecks is about bringing back the spirit of postcardware, circa 1993. It's about throwing a bunch of random crap into your game and keeping whatever sticks. About bringing back a time when you didn't care so much about "production values", as much as ripping sound samples from your favourite television shows to use in your game, or animating pictures of yourself making goofy faces on your webcam. Where every ridiculous idea you had, you would just sit down and code. When...

The Apple II series (trademarked with square brackets as "Apple ][" and rendered on later models as "Apple //") is a set of home computers, one of the first highly successful mass-produced microcomputer products, designed primarily by Steve Wozniak, manufactured by Apple Computer (now Apple Inc.) and introduced in 1977 with the original Apple II. In terms of ease of use, features and expandability the Apple II was a major technological advancement over its predecessor, the...

The Atari 8-bit family is a series of 8-bit home computers introduced by Atari, Inc. in 1979 and manufactured until 1992. All are based on the MOS Technology 6502 CPU running at 1.79 MHz, roughly twice that of similar designs, and were the first home computers designed with custom co-processor chips. This architecture allowed the Atari designs to offer graphics and sound capabilities that were more advanced than contemporary machines. Overall, the Atari 8-bit computer line was a commercial...

The ZX Spectrum (pronounced /ˈzɛdˌɛks/ "Zed-Ex") is an 8-bit personal home computer released in the United Kingdom in 1982 by Sinclair Research Ltd. The machine was launched as the ZX Spectrum by Sinclair to highlight the machine's colour display, compared with the black-and-white of its predecessor, the ZX81. The Spectrum was ultimately released as eight different models; together they sold in excess of 5 million units worldwide (not counting numerous clones). The Spectrum was...

A collection of BASIC programs from the 70s and 80s era of microcomputing. All items include working source code and in-browser emulation when possible.
Topics: basic, game, microcomputer, 8-bit, retrocomputing

DESCRIPTION
The Internet Archive Software Library is the ultimate software crate-digger's dream: Tens of thousands of playable software titles from multiple computer platforms, allowing instant access to decades of computer history in your browser through the JSMESS emulator.

The intention is to ultimately have most major computer platforms available; currently, the collection includes the Apple II, Atari 800, and ZX Spectrum computers. In each case, sub-collections contain vast sets of disk and cartridge images. Genres include games, applications, utilities, demos and operating systems.

To see a curated set of these many programs, with contextual descriptions and information, visit the Historical Software Collection, curated by the Internet Archive's Jason Scott. If you'd like to volunteer to help describe and increase knowledge on disks in the Software Library, contact Jason at jscott@archive.org.