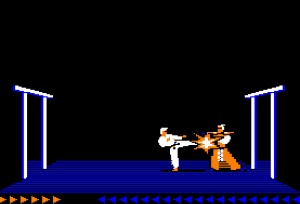 Games and entertainment software for the Apple II.

In Plasmania you control a microscopic ship moving through a persons bloodstream. As you navigate the ship you must destroy pathogens in the blood. If you run into the pathogens or walls of the blood vessels your patient will become sicker. If they become too sick they will die and the game is over.
Topics: Apple II games, Action games

The Apple II Library: Games
Gauntlet (Side A)
by Atari
software

This is it. The game everybody's been waiting for, Gauntlet, the most successful arcade game of all time has come home. And it brings with it all the characters, dungeons, traps, treasures, and excitement you loved in the arcades.
Topics: Apple II games, Action games

This is a Guess a color by number game i have invented and called it Kawashima in honor of DR. KAWASHIMA Nintendo Brain Training game! This is for Apple ii computers. Choose a number between 1,2,3 and let the computer made the game. Enjoy
Topics: Dr. Kawashima, Kawashima, Dr, nintendo, Apple, apple ii, guess, game

This is a version of the Apple II Lemmings demake, but with levels referencing the Homestar Runner universe.
Topics: Apple II, Homestar Runner, Lemmings, Demake

This is The Game Apple ii Garage i developed in november with improved images graphics. The Game is based on story wehre you have to find the computer issue, there are 3 case going in random loop.
Topics: Apple ii Garage, Apple ii, Woz, Apple, Game, issue

The Apple II Library: Games
Gyroscope (Side A)
by Catalyst Coders
software

Gyroscope is an action video game published by Melbourne House in 1985 for a number of home computers. It is based on the Atari arcade game Marble Madness. The gameplay is very similar to Marble Madness except the player controls a spinning gyroscope rather than a marble. The game is presented in isometric 3D. The player must guide the gyroscope from the top of the course to the bottom within an allotted time limit. If the gyroscope topples off the edge, a life is lost. Hazards on the course...

Choplifter (stylized as Choplifter!) is a 1982 Apple II game developed by Dan Gorlin and published by Brøderbund. It was ported to Atari 5200, Atari 8-bit family, ColecoVision, Commodore 64, Commodore VIC-20, and MSX. Graphically enhanced versions for the Atari 7800 and Atari XEGS were published in 1988 by Atari. In Choplifter, the player assumes the role of a combat helicopter pilot. The player attempts to save hostages being held in prisoner of war camps in territory ruled by the evil...
favoritefavoritefavorite ( 1 reviews )

Southwestern Data Systems recently came into the possession of this software product from the (Alien Sybmbols) Software Company. Judging from the programming style, it was our suspicion that the original game was the work of Nhoj Dranseb, a leading programmer of the Bezardian planetary system. Intensive reformatting efforts on our part have produced a disk which is compatible with standard Apple computers, despite the program's original existence on Bezardian computers. Although it was...
Topics: Apple II games, Action games

IT’S GORILLA WARFARE! THE THRILL OF THE ARCADE GAME You can feel an exciting tingle up and down your spine when you play DONKEY KONG at home, just like at an arcade. Your joystick guides Mario, the fearless carpenter, up the girders and elevators as he attempts to rescue his sweetheart from the clutches of Donkey Kong. All the thrills of the arcade game in a home computer version for one or two players.
Topics: Apple II games, Action games

This is a Pac-Man clone and not the official release on the Apple II.
Topics: Apple II games, Action games

Your war was never over. And now you're going back. The parachute drops you into the middle of enemy territory. Your mission: Prove the existence of American POW's in Vietnam - Don't engage the enemy - Leave it to the government to get them out. But who could leave Americans in that hell hole? Not you, John Rambo. Aided only by a beautiful woman, an AK-47 machine gun, a knife and a bow, you face the nightmare of Vietnam all over again. But this time you must win - or die! Put yourself to the...
Topics: Apple II games, Action games

A variant of Asteroids which gets a lot of attention because it was made in 1982 by Jordan Mechner. While the game was shown to a possible publisher in 1982 it was not picked up and became public in 2012. Unlike Asteroids your playfield is surrounded by walls which bounce objects. In addition to the normal movements of your ship, and laser, you also have a shield with limited power. As the screen is cleared new enemies will appear which will require multiple hits to kill.
Topics: Apple II games, Action games

The Apple II Library: Games
Popeye (Side A)
software

Climb aboard and join Popeye as you race him through a crazy maze in pursuit of Olive Oyl's falling hearts. The more hearts you help him catch, the higher your score. Of course, it won't be easy with Brutus and the Sea Hag around! Lead Popeye to his spinach in time and it's curtains for this pesky pair. If not - it's into the briny deep for this sailor! A fast and fun game for all ages! Alternative Name: 146a - Popeye
Topics: Apple II games, Action games

Notes by Usotsuki : As a proof of concept, I attempted to cram as many ProDOS translations as I could onto an 800K disk, using the new Selector from ProDOS-8 2.4 as the menu system. This disk image contains 19 classic Apple ][ games, 17 of which were ported to ProDOS by myself, and most of which are based on new rips without defacement of any kind. In addition, a bug has been fixed in One On One that prevented it from booting on an Enhanced //e when a Mockingboard has been installed. In every...
Topics: Apple II, ProDOS, Cracks, Software, Games

MazeBlox is a game developer in 1983 by William Stephens which was never commercially released. The game generates a random maze which you must attempt to solve. "This is a development prototype game brought to life by being the test bed for interfacing to the joystick and using the low res graphics facilities of the Apple II. This game developed the technique of “fat pixels” used to great advantage in the later release of Iconix, our first graphics or paint program. Mazeblox can be...
Topics: Apple II games, Action games

Pitfall II: Lost Caverns is a platforming video game originally released for the Atari 2600 video game console in 1984. It is the sequel to the popular Pitfall!. Both games were designed and written by David Crane and published by Activision. The star of the games is Pitfall Harry, an 8-bit jungle explorer. The game's plot was later remade loosely into Super Pitfall. The original Pitfall! has Harry exploring a jungle, collecting treasures, and avoiding danger in the forms of crocodiles,...
Topics: Apple II games, Action games

Wizardry III: Legacy of Llylgamyn This version takes the "san inc crack" disk images that were available on the Asimov archive and modifies them to work properly on an Apple //e with an 80-column card. Video describing the changes: https://archive.org/details/AssemblyLinesPodcast56 Changes by Chris Torrence A bug was fixed where on an Apple //e with an 80-column card in the aux slot, Wizardry would incorrectly switch to 80-column mode and have spaces between each character. To fix...
Topics: Apple II, CRPG, role playing game, Sir-Tech

DESCRIPTION
Games and entertainment software for the Apple II.

The Internet Archive Software Library is a large collection of viewable and executable software titles, ranging from commercially released products to public domain and hobbyist programs. Using the JSMESS emulator, users can "boot up" an emulation of the given title and use it in their browser. More titles are added frequently, and users are encouraged to donate newly found floppy disk images and programs.