Forest entomologist and aerial observer William M. Ciesla was the director of Forest Pest Management in Region 6 from 1988-1990.

Notes from: Ciesla, William M. 2005. Forest Health Under a Wandering Star. Western Forest Insect Work Conference Founder's Award. www.wfiwc.org/sites/default/files/documents/addresses/cie...
"Portland, OR – 1988-90
Within days after our return from Chile, I learned that I had been selected to fill the vacancy of Director of Pest Management in R-6, a position that had been vacant for nearly two years.
A major outbreak of western spruce budworm was underway in the Region, with several million acres of forests suffering defoliation. Plans were already underway for a large suppression project and I arrived just in time for Regional Forester Jim Torrence to announce that, based on the Environmental Analysis that had been completed, he would authorize treatment of up to 1 million areas providing they met the pre-spray insect population densities that had been established. That project took up virtually all of my time for my first six months in R-6. We successfully treated 600,000 acres, all with undiluted formulations of Bacillus thuringiensis. For the first time, we adapted the Incident Command System (ICS), an organizational structure for managing large wildfire suppression projects, to insect suppression. We established five Incident Command units and an Area Command in Portland. The project involved deployment of over 70 helicopters, a fleet of turbine powered fixed-wing aircraft and over 700 people. I believe it still stands as the largest single western spruce budworm suppression project that involved exclusive use of a biological insecticide. The project was a great success and all of the units treated met the post treatment criteria of < 1 budworm larva/15 inch branch. We conducted smaller western spruce budworm suppression projects in 1989 and 1990.
Another initiative in which I was involved was the decentralization of the Forest Pest Management function. Up to that time, all of the Forest Pest Management specialists had been located in the Regional Office in Portland. We established a zone office attached to the Wallowa-Whitman NF in LaGrande, OR and another attached to the Deschutes NF in Bend OR. Several years later, we chartered a third zone office on the Wenatchee NF in Wenatchee, WA to serve all of Washington east of the Cascades. This initiative was a success because it put specialists closer to the field and reduced the number of days they had to spend away from home. Today, five Forest Health Service Centers or Zone Offices are operating in the Region.
By the time I arrived in R-6, some the FPM staff was already involved in the use of the MOSS GIS, which my former unit, MAG, had made available several years earlier. With a little encouragement, in 1989, Tommy Gregg, Kathy Sheehan, Tim McConnell and several others on the FPM staff produced the first R-6 regional insect conditions map generated by a GIS. One of my proudest moments was to display this map at a meeting of the R-6 Leadership Team." 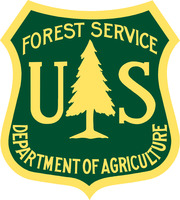