War Is a Racket 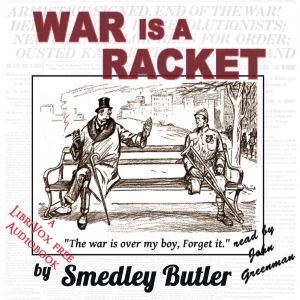 War Is a Racket

LibriVox recording of War Is a Racket by Smedley Butler.
Read in English by John Greenman

Marine Maj. Gen. Smedley Butler's expose of American Corporate Imperialism. Butler said, “I served in all commissioned ranks from second lieutenant to Major General. And during that period I spent most of my time being a high-class muscle man for Big Business, for Wall Street, and for the bankers. In short, I was a racketeer for capitalism. I suspected I was just part of the racket all the time. Now I am sure of it.” - Summary by John Greenman and https://www.americanswhotellthetruth.org/portraits/major-general-smedley-butler

For further information, including links to online text, reader information, RSS feeds, CD cover or other formats (if available), please go to the LibriVox catalog page for this recording.

The military industrial financial complex is not going to stop voluntarily. It will take an educated society.

This book is a place to start: