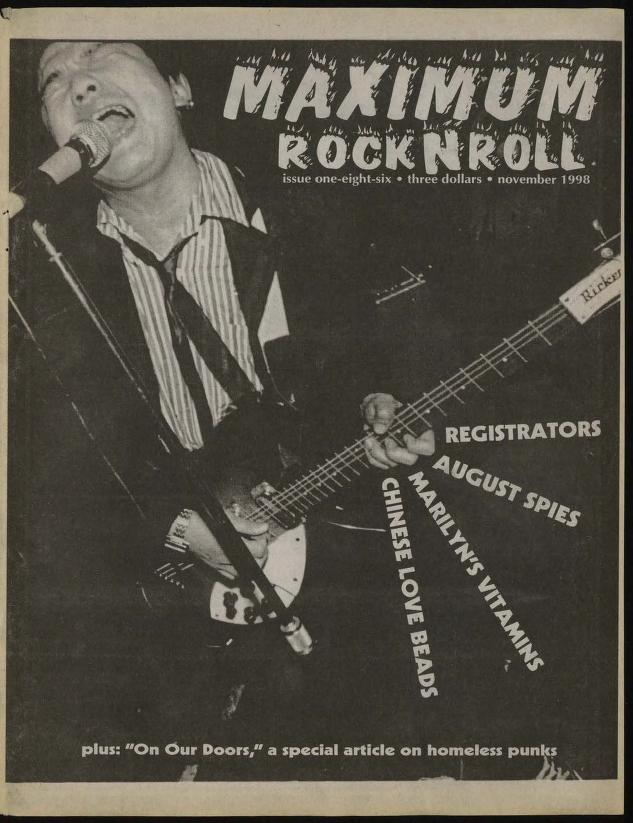 This is a collection of zines that can be found on the Archive. Zines are self-published, non-commercial publications with typically small circulations. They cover a wide range of topics with many focused on politics, art, creative writing, and personal theory.

Maximumrocknroll, often written as Maximum Rocknroll and usually abbreviated as MRR, is a not-for-profit monthly zine of punk subculture. Based in San Francisco, MRR focuses on punk rock and hardcore music, and primarily features artist interviews and music reviews. Op/ed columns and news roundups are regular features as well, including submissions from international contributors. By 1990, it "had become the de facto bible of the scene". MRR is considered to be one of the most...

Zines around the political aspects of Anarchy and Anarchism.

Magazines described as part of Punk music and culture.

Mixed Media 4 This ish is back to all over the place.  Cover stars Judy Garland and Robert Louis Stevenson each have several links, including a 78 of the Easter Parade soundtrack and Treasure Island in three languages, though the N.C. Wyeth-illustrated one is the purtiest, and strangely not available on Project Gutenberg.  There is a variety of public discourse on such themes as UC-Berkeley GOP, Canadian copyright, a skeptical feminist versus male chauvinists, and communist apologists en...
Topics: IA links, history, music, film, tv, radio, Judy Garland, Robert Louis Stevenson, Janis Joplin, Mary...

More Than a Paycheck Zine

Punk Planet was a 16,000 print run punk zine, based in Chicago, Illinois, that focused most of its energy on looking at punk subculture rather than punk as simply another genre of music to which teenagers listen. In addition to covering music, Punk Planet also covered visual arts and a wide variety of progressive issues — including media criticism, feminism, and labor issues. The most notable features in Punk Planet were the interviews and album reviews. The interviews generally ran two or...

Scans of zines about raves and rave culture.&nbsp;

Sand in the Wheels (English and German)

This publication is the result of a research carried out by Dorothy Spencer and Joan Pallé. The project looks at different alternative & radical pedagogical projects in Barcelona and London throughout history, beginning with the anarchist initiatives in Barcelona. It pays particular attention to the use of printed materials such as zines and fanzines as an educational tool and contains essays and interviews with people engaged with different radical projects.
Topics: fanzine, zine, anarchist education, radical education, antiuniversity, ferrer i guardia, anarchist...

Slug and Lettuce is a free newsprint punk zine started in State College, Pennsylvania by Chris Boarts in 1987. In 1989 CBL and S&L relocated to New York City where the zine's print run steadily grew and increased to 10,000 with free worldwide distribution. In 1997, CBL and S&L relocated to Richmond, Virginia. Its byline reads "A zine supporting the Do-It-Yourself ethics of the punk community". The print version ended in 2007 with edition #90, and the PO Box was closed in 2016....

This collection consists of a variety of small press zines and pamphlets published by anarchists and anti-authoritarians. The items in this collection focus primarily on tactical, strategic, and organizational themes, reflecting the shared knowledge and experiments created by anarchists over the past several years. The zines are reflections and accumulations of knowledge forged in the streets, in collective projects, at anarchist spaces, and in conversation. Within the collection there are...
Topics: zines, zine, small press, anarchism

From the Coalition of Homelessness (San Francisco, CA)

Housing for People, not Profit

The Newsletter of ER Burroughs

The Individual: Newsletter of the Society for Individual Freedom
collection
58
ITEMS
172
VIEWS
collection

The Individual: Newsletter of the Society for Individual Freedom

From “Strike One To Educate One Hundred”: On June 4, 1975 during a search for Chianti wine magnate Vittorio Gancia, kidnapped a few days earlier, a carabinieri patrol surprised Mara Cagol and other BR comrades in a farmhouse near Acqui. A brief firefight broke out in which Mara was badly wounded, captured, and then executed on the spot by the carabinieri. At first Mara’s identity was not known by police but BR quickly acknowledged that the Gancia kidnapping was their operation and that...

UFO Newsletters from the Archives For the Unexplained
collection
10,321
ITEMS
627,456
VIEWS
by Various
collection

A large collection of newsletters from around the world and through the decades, dedicated to Unidentified Flying Objects and related gathered research. The vast majority of these come from the Archives for the Unexplained in Norrköping Sweden. More information about this organization is here:&nbsp; http://www.afu.se/afu2/

DESCRIPTION
This is a collection of zines that can be found on the Archive. Zines are self-published, non-commercial publications with typically small circulations. They cover a wide range of topics with many focused on politics, art, creative writing, and personal theory.
ACTIVITY